Do-Rite Donuts or Do-Right Up Your Alley 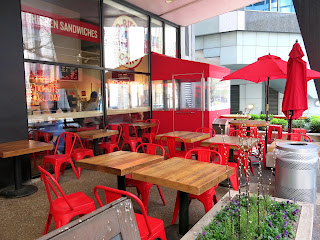 "I just don't understand why we keep loosing!" exclaimed one of the members of Brandy's bowling team.  It had been a full month since they had won a match and the members of the Bowling Brunchers were beginning to think they had incurred a billy goat style curse somehow.  Bad luck seemed to plague them, like the time one of the balls hit an unseen divot in the floor and bounced straight into the gutter, or the other time they managed to hit the pins straight on in the center, but not a single one tipped over because some prankster child had glued them to the floor just before the match.  Brandy looked around her at her team members, seeing them despondently chugging their vegan smoothies and munching on their energy bars.  "There's the problem!" she exclaimed, "What we need is some protein to build our strength and some good old fashioned sugar coated carbs to maintain our energy."  The members of the Bowling Brunchers starred at her incredulously.  "Listen, before our next match, I'm going to bring us the perfect meal to sharpen our focus and get us in the right frame of mind.  No more of this health food nonsense!" 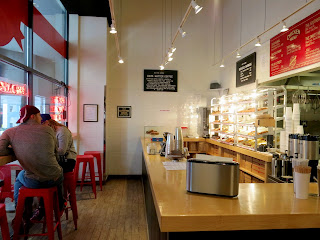 Having set this goal, Brandy zeroed in on the Do-Rite Donuts on Erie.  She knew when she was approaching the Do-Rite because she could smell the sweet scent of frying dough in the air.  The spot was a little small, with more space to move about and sit than Firecakes or Doughnut Valt, but without a full cafe like Glazed and Infused (there was however a nicely shaded patio area just outside).  With the more utilitarian purpose of grabbing and going rather than being a place to stay and linger for a while, there wasn't much to be said about the decor, which was really just fine by Brandy, as it brought the customer's focus to the main event, the wall of donuts. 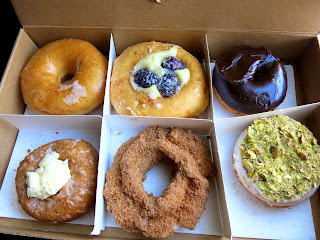 Since this particular location featured not only an array of sweet treats but also a full menu of fried chicken sandwiches (Brandy noted there were several breakfast sandwiches available, but only before 10:30 am, and as most brunches occur well after that, she decided the lunch menu was more appropriate), Brandy's couldn't resist ordering up a few to take back to her team as well as a half dozen assorted donuts.  "Would you like to pick or have me choose for you?" asked the young sleepy eyed, yet helpful attendant.  "Why don't you decide for me dear.  Give me the best of what's on offer," Brandy replied, feeling adventurous. 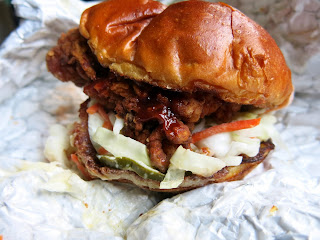 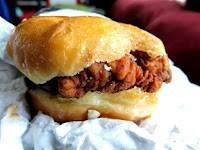 First order of business upon returning to the team was to dig into the sandwiches while they were still warm and fresh.  Each sandwich featured a massive fried piece of chicken breast, which was hot, crispy, and deep brown in color.  The CBR was Do-Right's take on the classic BLT, featuring bacon and ranch dressing as well as cheddar cheese and pickles on a brioche bun.  This was most certainly a sandwich for a carnivore, as the smokey bacon and juicy chicken proved extremely satisfying, especially when paired with the tangy ranch dressing.  The Southern featured a nice and crunchy thick cut cabbage cole slaw as well as some tangy BBQ sauce and just enough spice to make things interesting.  The Sweet Heat was possibly Brandy's favorite, as it was both the simplest and most exciting.  Instead of a lot of toppings, the chicken was dressed with a spicy maple aioli and instead of a bun, the chicken was sandwiched between two halves of a vanilla bean glazed donut.  Though a little too on the sweet side, Brandy did like the bit of tang from the aioli, which cooled the kick of spice perfectly. 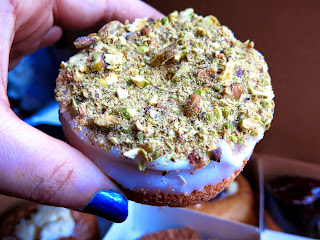 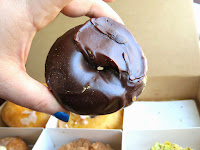 Moving on to the gorgeous little gems that were her half dozen, Brandy eyed up the flavors the attendant had chosen for her and the rest of the team.  First was a simple Vanilla Bean Glazed, which was nice, but wasn't quite tender enough for Brandy's liking.  "Perhaps its because these sorts of yeast donuts are usually best consumed hot and fresh," she mused.  The Valrhona Chocolate was next up, which was a dense cake donut with a thick, rich glaze of dark chocolate that wasn't nearly as sweet as Brandy expected it to be.  The Pistachio Lemon was much in the same vein as the previous one, but with a bright lemon flavored glaze that cut through the denseness of the cake and some crushed pistachios to provide both color and crunch.  The Cinnamon Crunch Old Fashioned definitely delivered on all fronts with a nicely crunchy exterior and a spicy cinnamon punch.  The Carrot Cake was surprisingly light in texture with a delectable cream cheese frosting dollop in the center.  Last but certainly not least was the special flavor of the week, the Blackberry White Chocolate Bullseye, which was one of the vanilla glazed donuts topped with a scrumptious white chocolate cream that was surprisingly light (less dense than a pudding, but heavier than whipped cream was what Brandy noted) and three sugared blackberries.  The combination of the juicy, tart berries, the rich chocolate cream, and the chewy yeast donut was utterly perfect.  "Such a shame this one's not on the regular rotation!" Brandy moaned, "But it does make me wonder what other wonders they're coming up with week to week."

Now having stuffed her team full of delicious fried chicken and delightfully original donuts, Brandy felt certain their luck was about to turn around, and that very day the Bowling Brunchers finally broke their losing streak by throwing three simultaneous perfect games.  The substantial dose of protein from the chicken sandwiches (which were priced at an unbelievably reasonable price of about $5 each) combined with the latent energy in the gourmet donuts seemed to have revitalized the team in both body and mind.  "Now, of course we can't be eating like this all the time," Brandy smiled at her team, "But if by some miracle we make the league playoffs, I don't want to hear any complaining about gaining a few extra pounds." 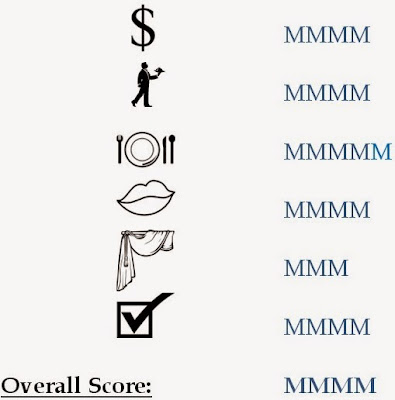