The Commons Club or High Time for High Tea 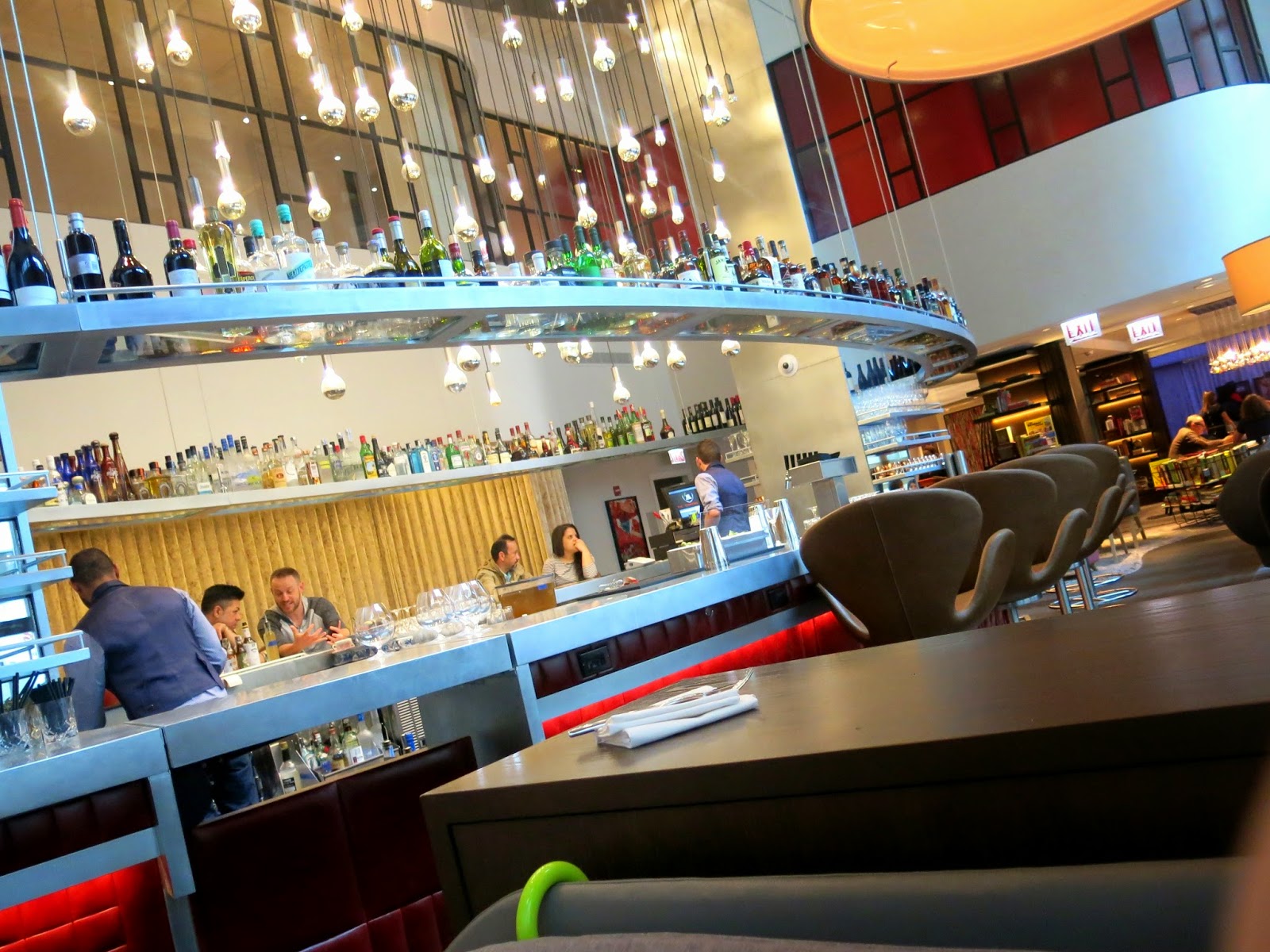 Brandy sighed, gazing out her window on a cold, rainy Chicago spring day.  She was missing England.  "I do love The Windy City," she moaned, "But sometimes one just longs for things like the smell of sea air, a walk through a foggy moor, or a decent cup of good British tea."  Unable to shake her homesickness, Brandy phoned up her old friend Brocco Leigh Binto and asked if he might be able to invent something that would make her feel better.  "Well, that could take years of research, development, and testing," he told her, sympathetically, "But I did hear that the Virgin Hotel just started up a high tea service.  Maybe a little taste of your home land would cheer you up."

Brandy decided to take Brocco's advice and enlisted him to accompany her to The Commons Club on the second floor of the Virgin Hotel.  The space boasted impossibly high ceilings, a playful library, and a semi-casual dining area surrounding an ornate bar.  Much like its downstairs sister restaurant, Miss Ricky's, the space had just enough rock and roll feeling to it to make it stylish without being obnoxious. 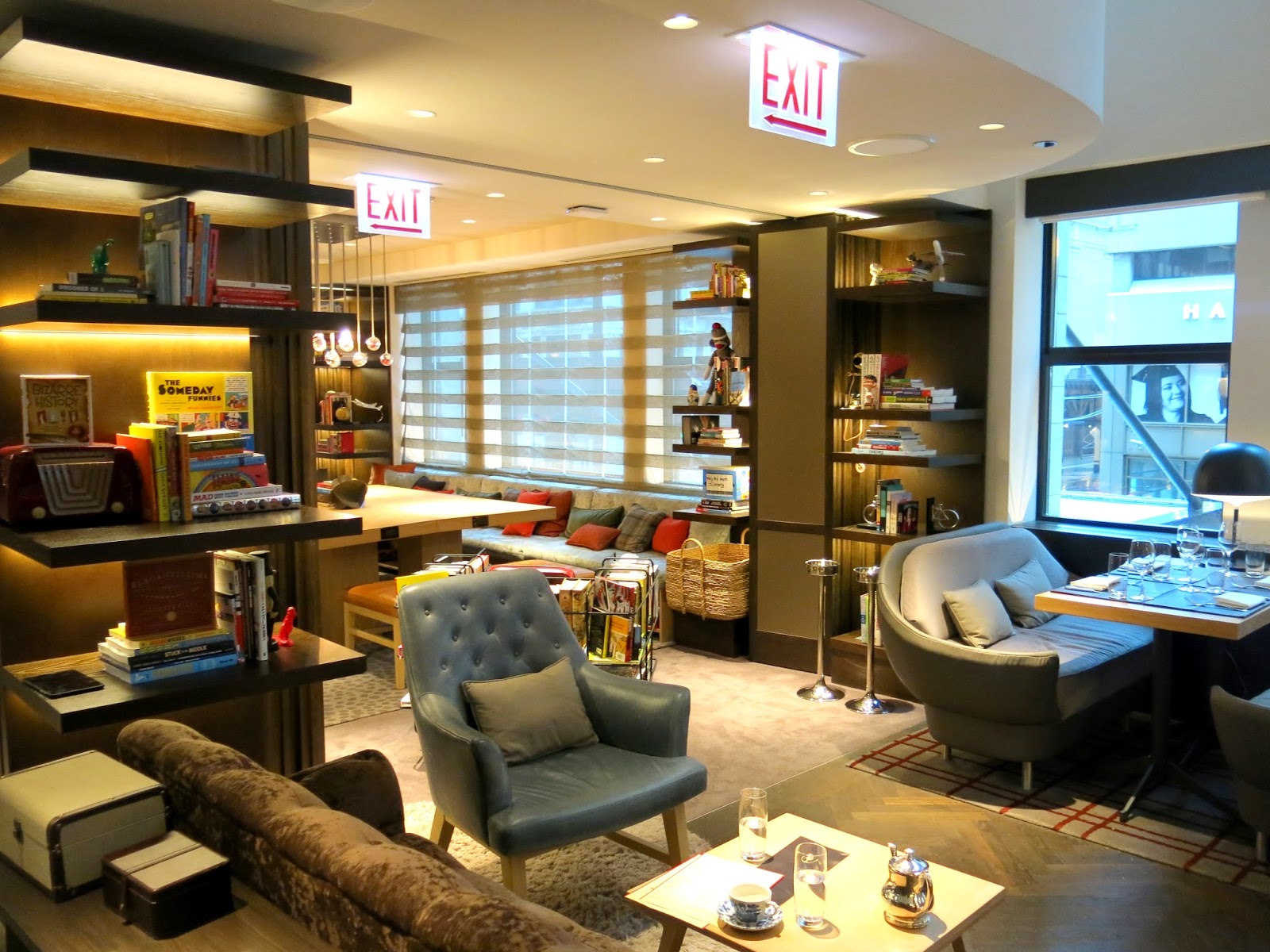 Upon browsing the menu, Brandy discovered that the tea service had a little twist: it featured not only traditional tea time snacks and pots of hot tea, but also six seasonal cocktails, all featuring different Rare Tea Cellars teas.  "They're calling this an Upside Down Tea Party," Brandy observed, "Presumably because you'll be upside down under the table when its over."  "It's a good thing the Virgin Hotel features a Bow Truss Coffee in room pour over service then," Brocco smiled.  And so encouraged by that useful feature of the hotel, Brocco and Brandy threw caution to the wind and ordered round after round of tea cocktails until they found they'd (somewhat) accidentally tried them all. 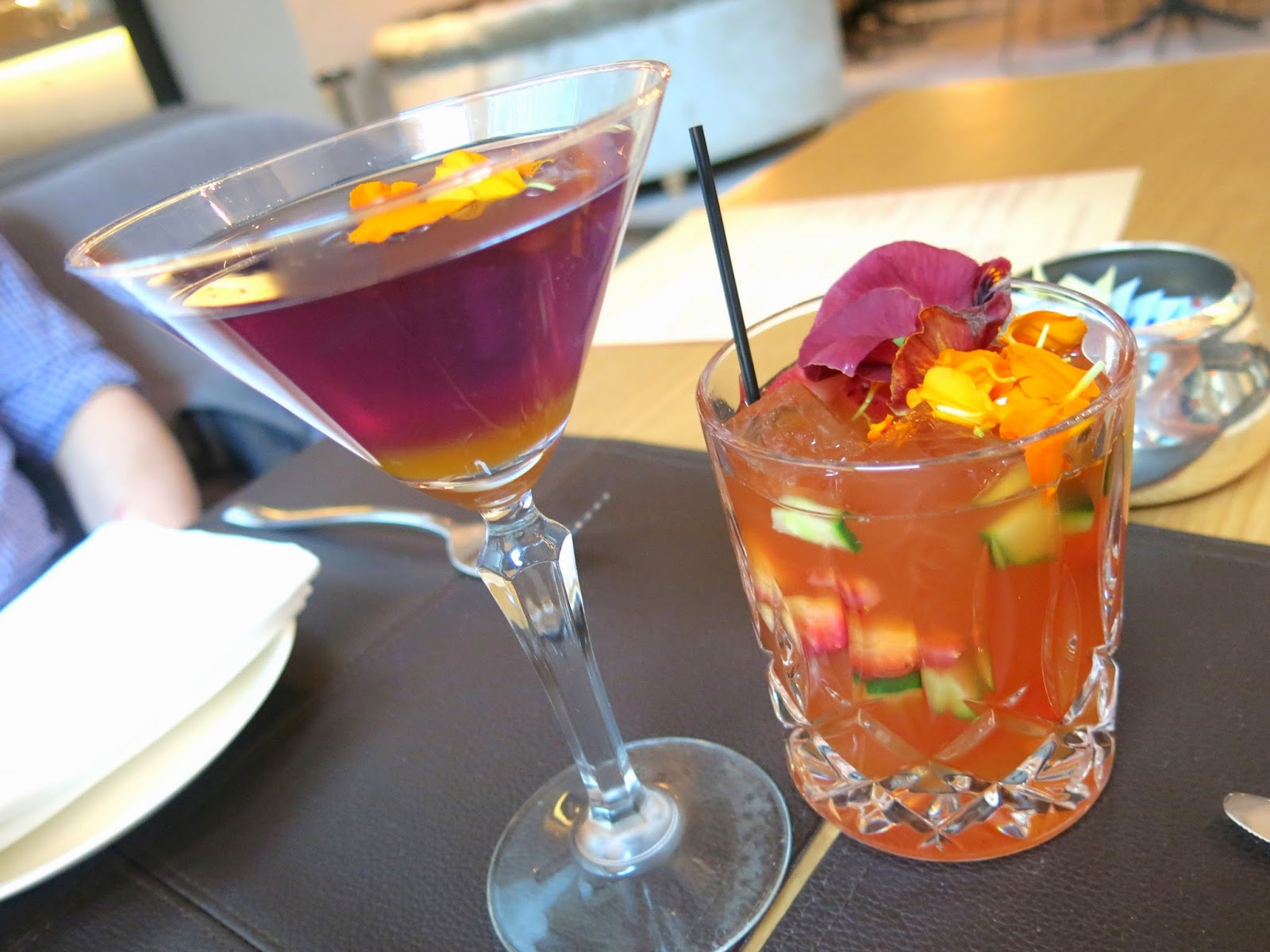 Gentry Cove (on the right)- gin, vermouth, strawberry, lemon, and Earl Grey Brandy likened this one to a Pimm's Cup, in that it packed plenty of punch with a nice fruity finish.  This was light, infinitely drinkable, and perfect for a spring day. Pomp and Circumstance (on the left)- gin, aloe liqueur, butterfly pea tea, corn flower, passion fruit This was probably the most stunningly presented cocktail of the day, as its top layer was a vibrant blue, the middle was a royal purple, and the bottom a sweet shot of passion fruit nectar.  The taste was a little too vegetal for Brandy's liking, but Brocco enjoyed it.

Fields of France- vodka, anise liqueur, Campari, tonic, honey, lavender tea Not normally a fan of anise flavored things, Brandy was surprised to have enjoyed this drink, which had a lovely floral quality to it.  This concoction was probably one of the better showcases for the tea that inspired it, which is flavored with various berries and flowers. 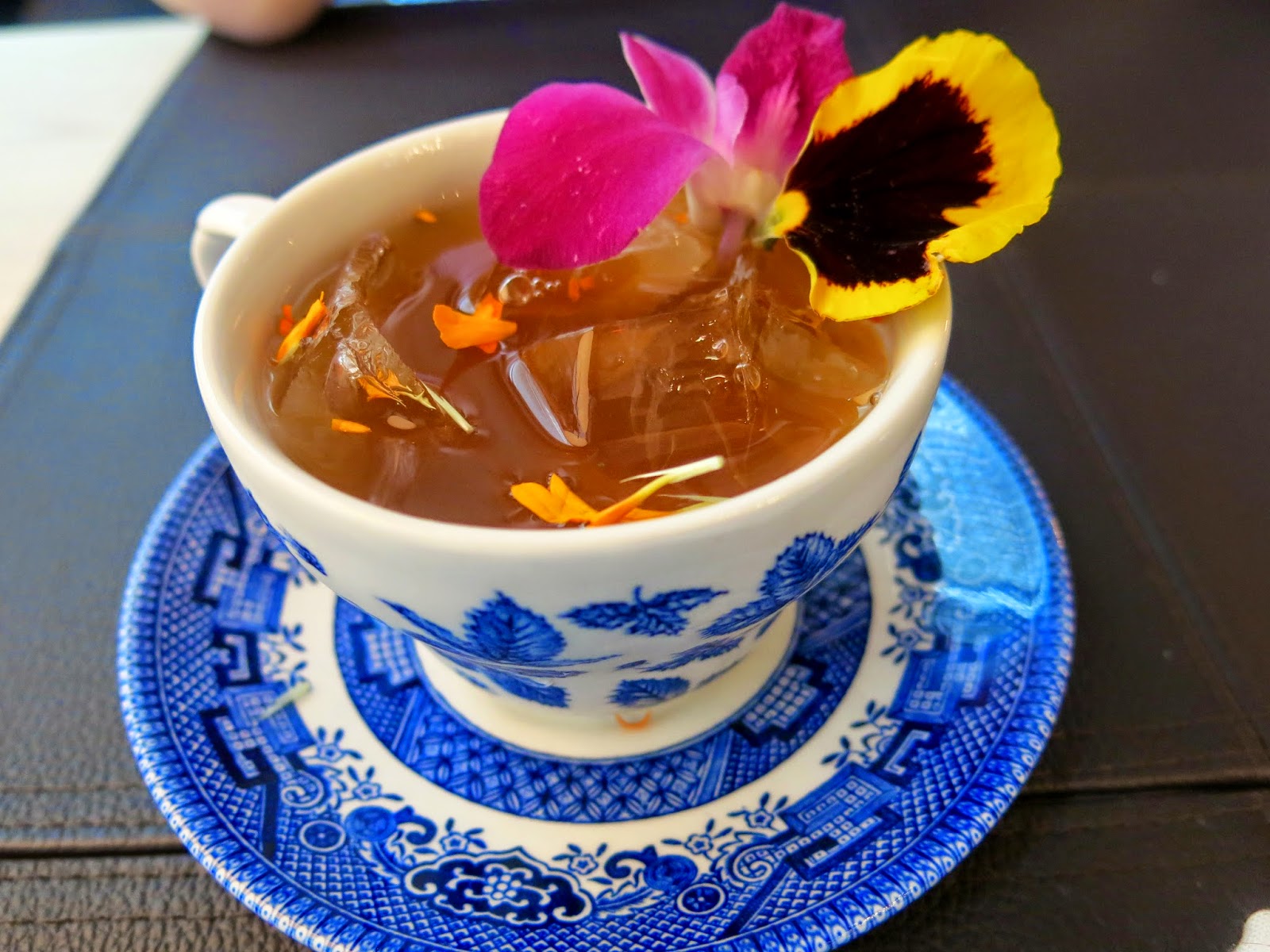 Bold as Love- rum, mint, green tea, lemon, verbena This one was both Brandy and Brocco's least favorite of the bunch.  It was a tad too herbacious for their liking, and baring a slight resemblance to a mojito, Brocco wished it would have been a little sweeter.  "Maybe Bold as Love is the wrong name for this," as he put it, "I'd call this the Bold as Like-quite-a-bit-but-not-in-Love." 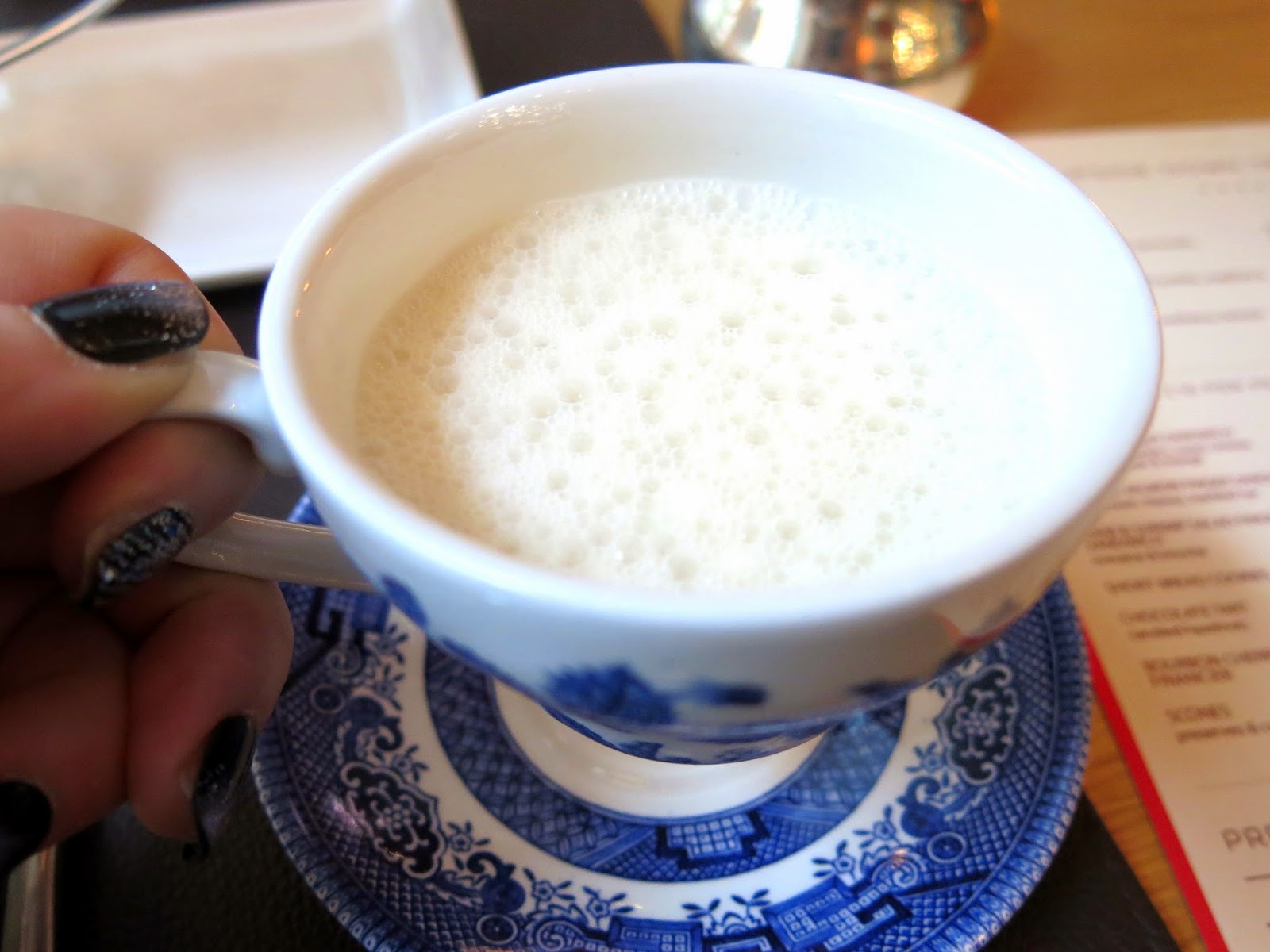 Sunny Day in London- gin, brandy, sherry, black tea, honey, cream Although most of the other cocktails came adorned with colorful flowers, this one came simply presented over crushed ice in a pretty tea cup, and made Brandy burst into laughter when she saw it.  "What's so funny?" Brocco asked.  "It's called a Sunny Day in London, but it's cloudy.  Get it?" Brocco did not get it.  Regardless, Brandy thought this was the best cocktail for enjoying with the food because of its rich, sip-able flavor. 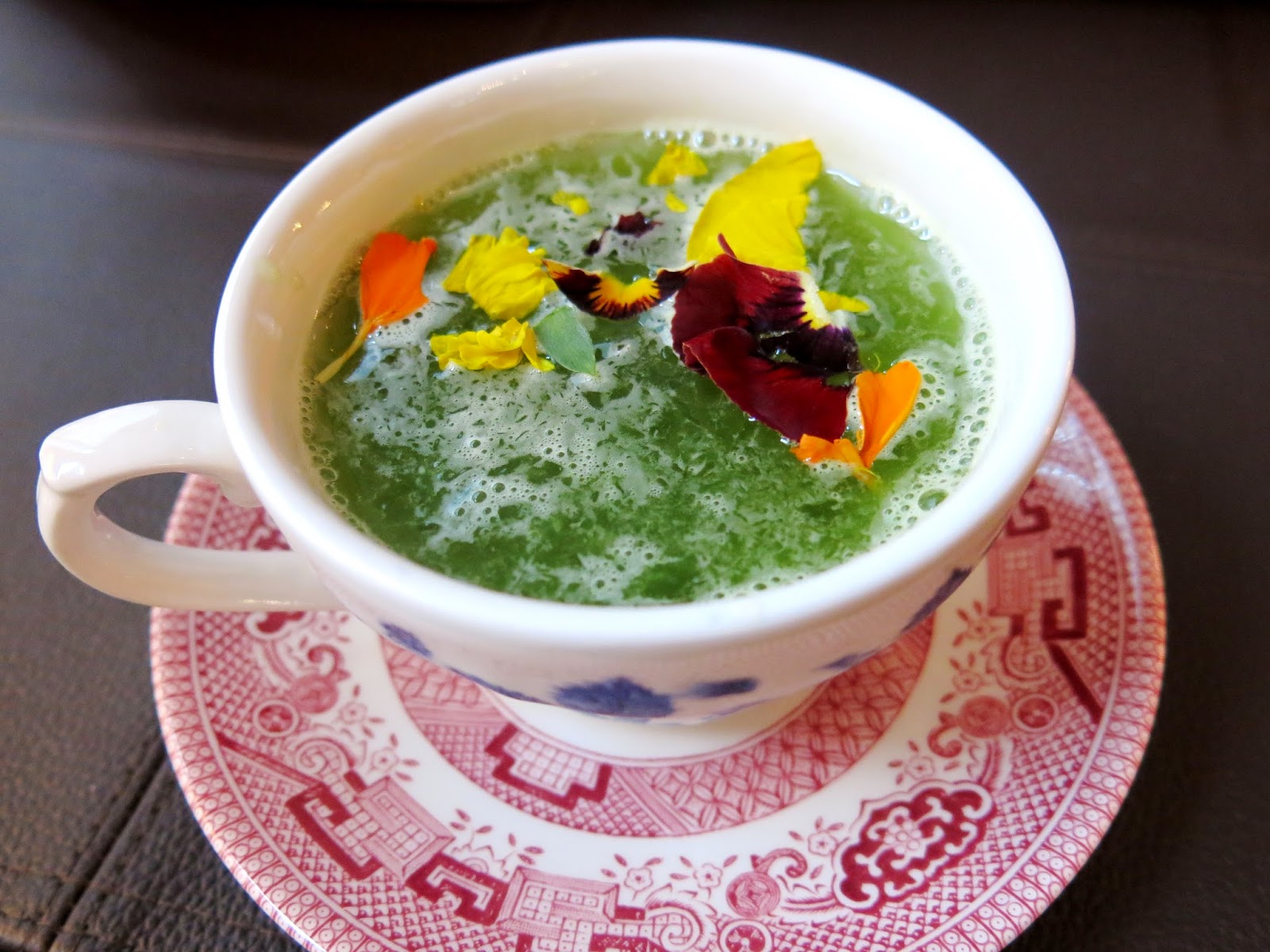 Spring Fling- vodka, St. Germain, lemon soda, jasmine green tea The last cocktail of the afternoon was also one of the prettier ones, having a vibrant green color which set off the flowers floating on the top and reminding Brandy of a pond covered in lily pads.  Its flavor was bright and fruity with an almost melon like flavor that Brocco quite enjoyed. 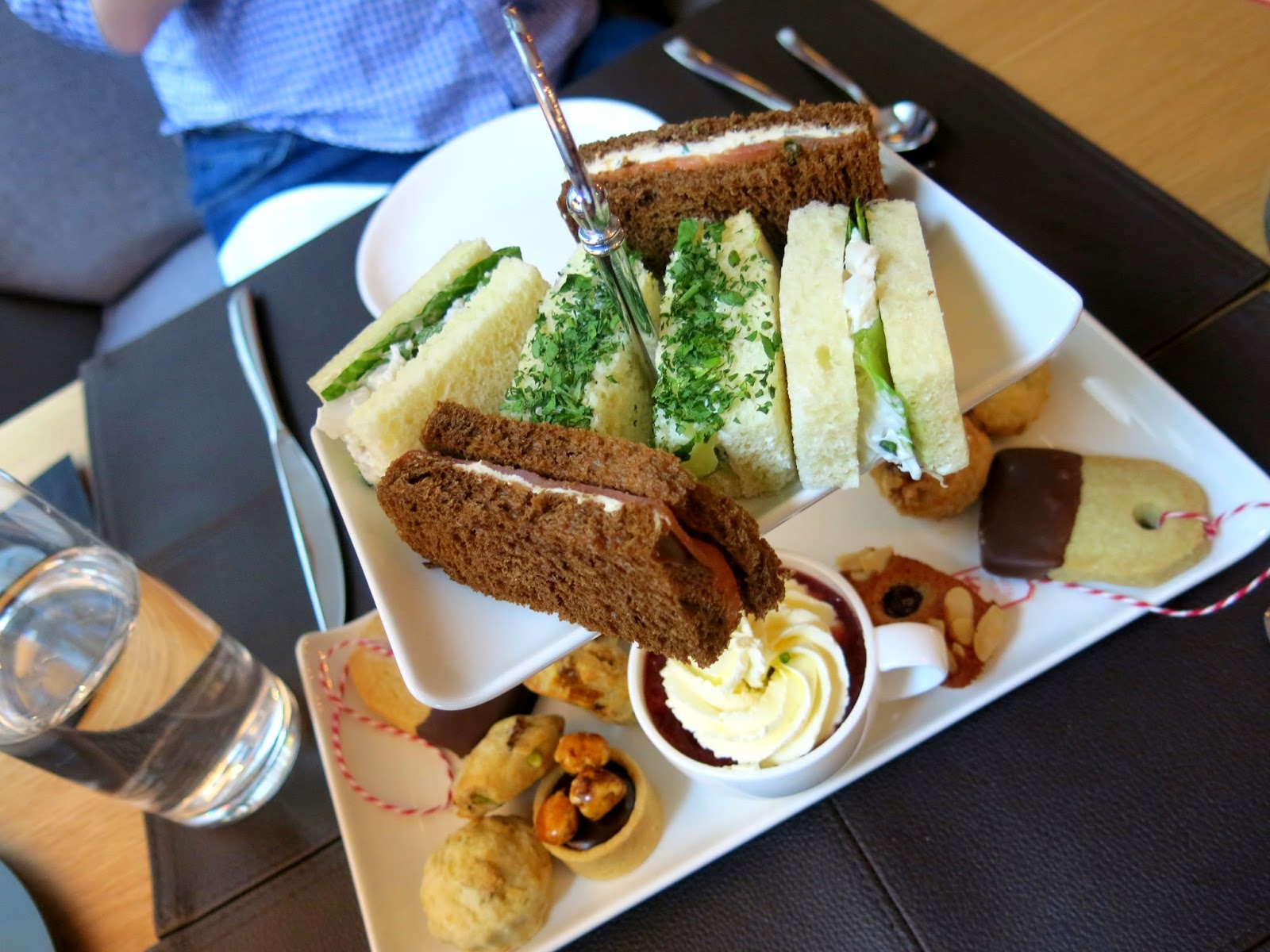 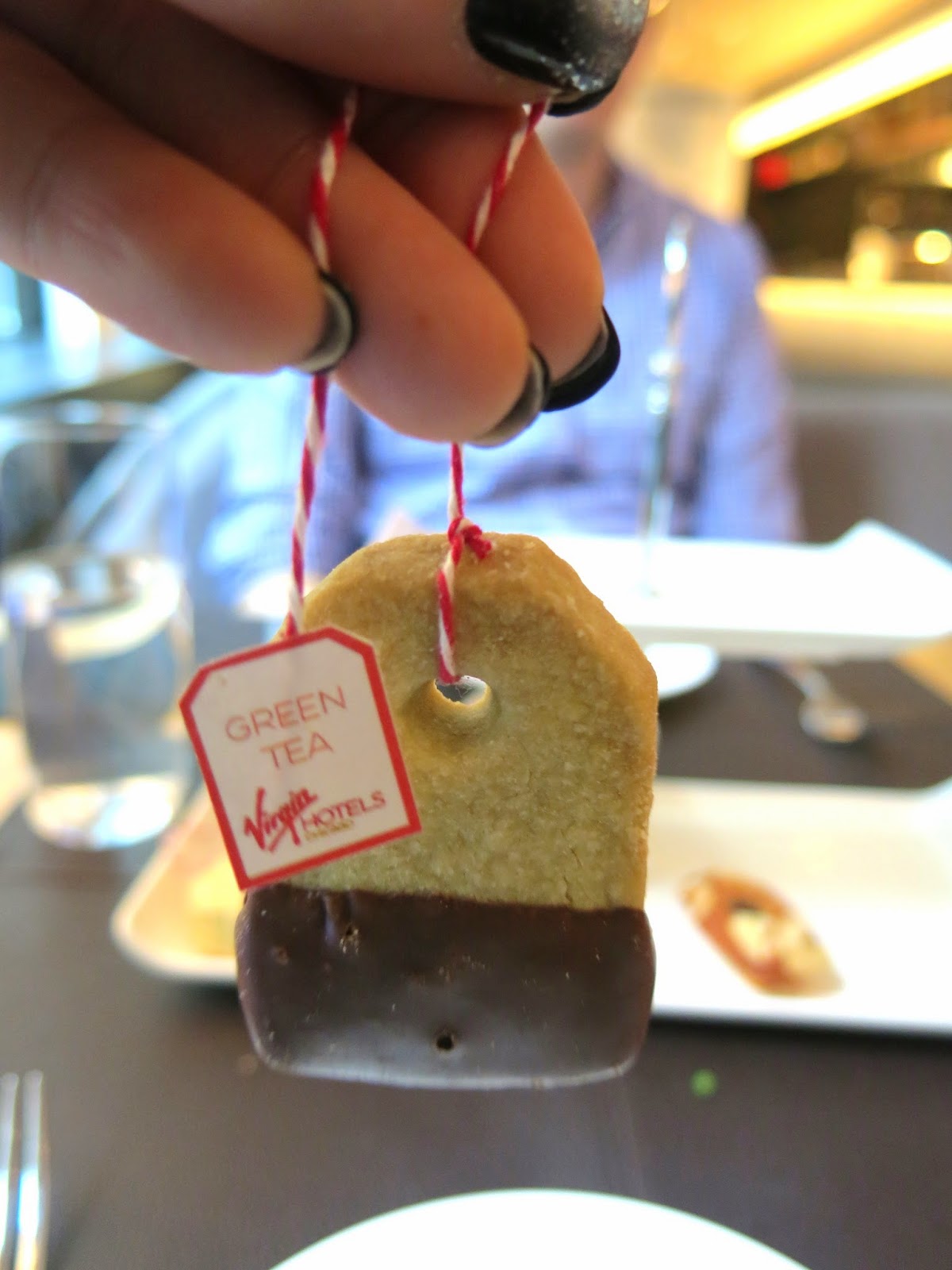 As for the food, the offerings were pretty traditional: a few finger sandwiches, scones with clotted cream and jam, a couple bite sized pastries, and a cookie.  Brandy was a tad disappointed that there weren't more modern takes on the nibbles to match the creativity behind the cocktails, but she thought everything was quite lovely all the same.  The Crab and Shrimp Salad Sandwich was a nice change of pace from the more traditional Smoked Salmon and Cucumber sandwiches, but all three were delicate and tasty.  The scones were tiny indeed, each one about the size of a bite or two, with flavorings like walnut, pistachio and cherry, and cinnamon raisin, while the jam and cream came adorably presented in a tiny tea cup and looking like some sort of dessert in and of itself.  "Whipped cream?  On your scone?" Brocco questioned upon spying the confection.  "No dear, clotted cream," Brandy corrected him, "It's sort of like a buttery spread.  Go on, try it."  And with one scoopful of the stuff, Brocco was a changed man.  The little pasties were nice, especially the rich chocolate tart with candied hazelnuts on top, but the dainty financier with cherries and almonds had its own rustic charm too.  Brandy simply adored the presentation of the shortbread cookie, which had its lower half dipped in chocolate, as it was shaped like a tea bag and even had string tied to it, making it perfect for dipping.  "Sadly, we've neglected to actually order any actual tea," Brandy observed, and then shrugging, she dipped the thing in one of her cocktails. 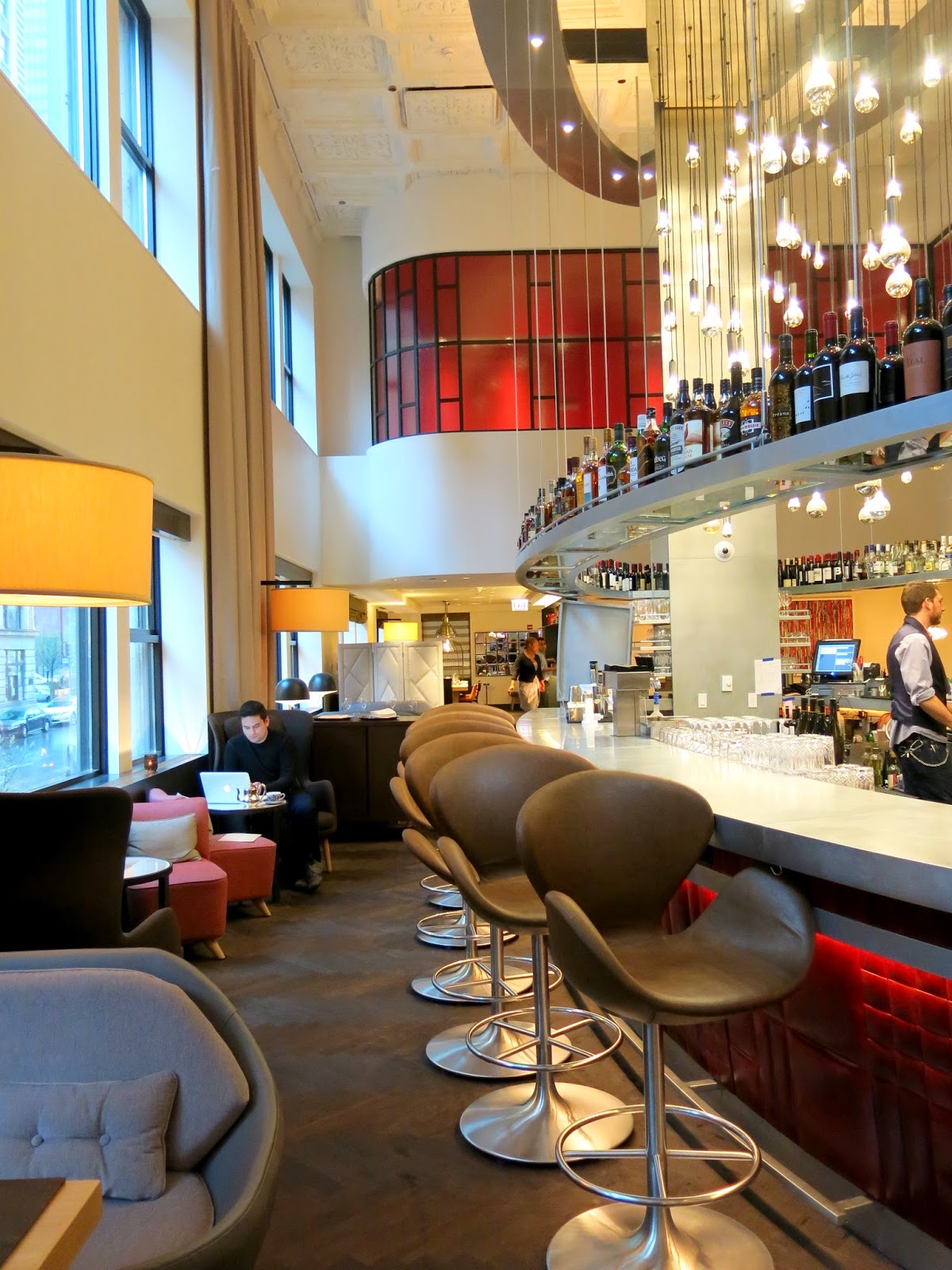 Whiling away a rainy afternoon with a high tea service at The Commons Club might have normally made Brandy even more home sick for dear old England, but with more than a few cocktails in her system as well as some excellent nosh, she actually felt quite contented.  "Not only did we drink our way through the entire menu, we may have also drunk an entire garden this afternoon," she giggled as she eyed the colorful flowers in her empty cocktail glass, "But I'd say these tea cocktails do make for a lovely change of pace for a tea service.  I can see myself coming back to this season after season as the menu shifts."  Brandy also loved the relaxed, yet refined atmosphere of The Commons Club, where the well dressed servers and bartenders were polite, chatty, and very well informed.  With the tea service only $10 a person and the cocktails coming in at $12 a piece (actual pots of tea were also available for $7, but also several premium selections ranging from $14-$55 for high rolling tea connoisseurs), Brandy also thought the prices weren't too outrageous.  "Well, it certainly wasn't the most traditional tea service I've ever attended," Brandy said grandly as she made her way down to the hotel lobby, "But I do have to admit that I feel quite a better going out than I did going in." 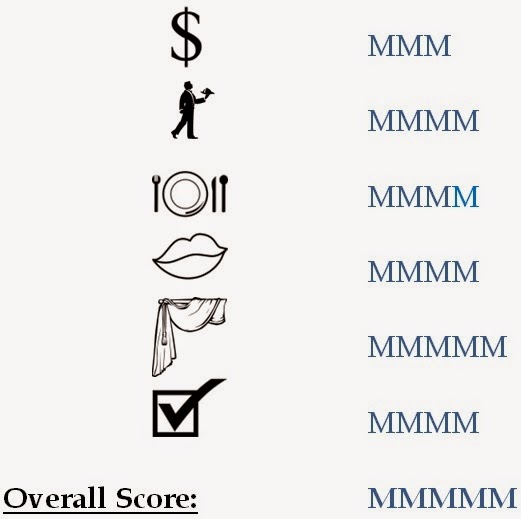