From the Kitchens of Bunny and Brandy: Chai Spiced Dutch Baby Pancakes

Though she may not admit it to its fullest extent, there are times when Brandy greatly misses her old brunch companion, Bunny.  For instance, every time she sees an interesting Eggs Benedict on a menu, her first instinct is to call Bunny.  "Can you believe they're putting onion relish on this thing?" she'll laugh, more often than not to Bunny's voicemail, since Bunny is rarely in a place where mobile phones can operate as normal. 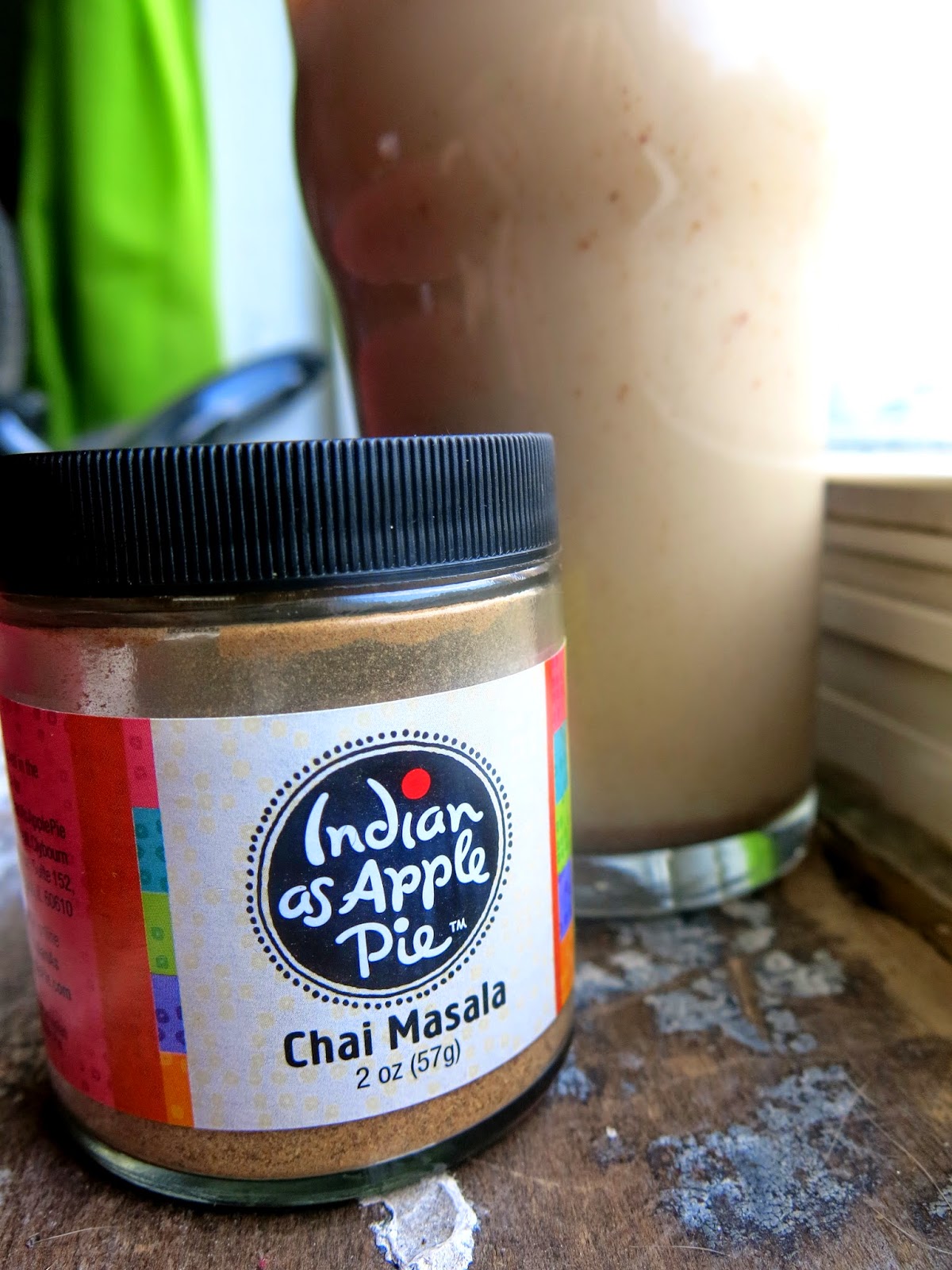 Something else that always reminds Brandy of Bunny is chai masala, that beautiful blend of Indian spices that most of the Western world associates with fall time tea beverages from their local coffee houses.  Bunny once made Brandy a pot of chai tea completely from scratch, using the recipe a childhood friend had given her.  One sip of that tea and Brandy knew she and Bunny were bonded for life, for the spicy mix of ginger, cinnamon, cardamon, and cloves warmed up every part of her, including her heart.

Perhaps this is why when Brandy recently discovered a Chicago based Indian spice company called Indian as Apple Pie, her very first thought was about chai.  Indian as Apple Pie carries a line of 8 custom spice blends, meant to make Indian cooking not only accessible, but simpler for both experienced and novice cooks hoping to create authentic Indian cuisine at home.  Their Chai Masala Blend is the perfect aromatic mix of finely ground spices, ready to be used not only in your tea, but also for things like spice rubs, baking, or even ice cream.

Though she usually associates chai with fall, Brandy decided to try and create something a little more summery and tropical with this spice blend, something that might lend itself to a sweet breakfast indulgence.  Remembering an old favorite from her own childhood (which her mother referred to as "puffy pancakes"), Brandy reworked the recipe to create the ultimate celebration of chai masala and the friend who introduced her to it so long ago.

The writers of this blog were provided with product free of charge for the purposes of writing this post. 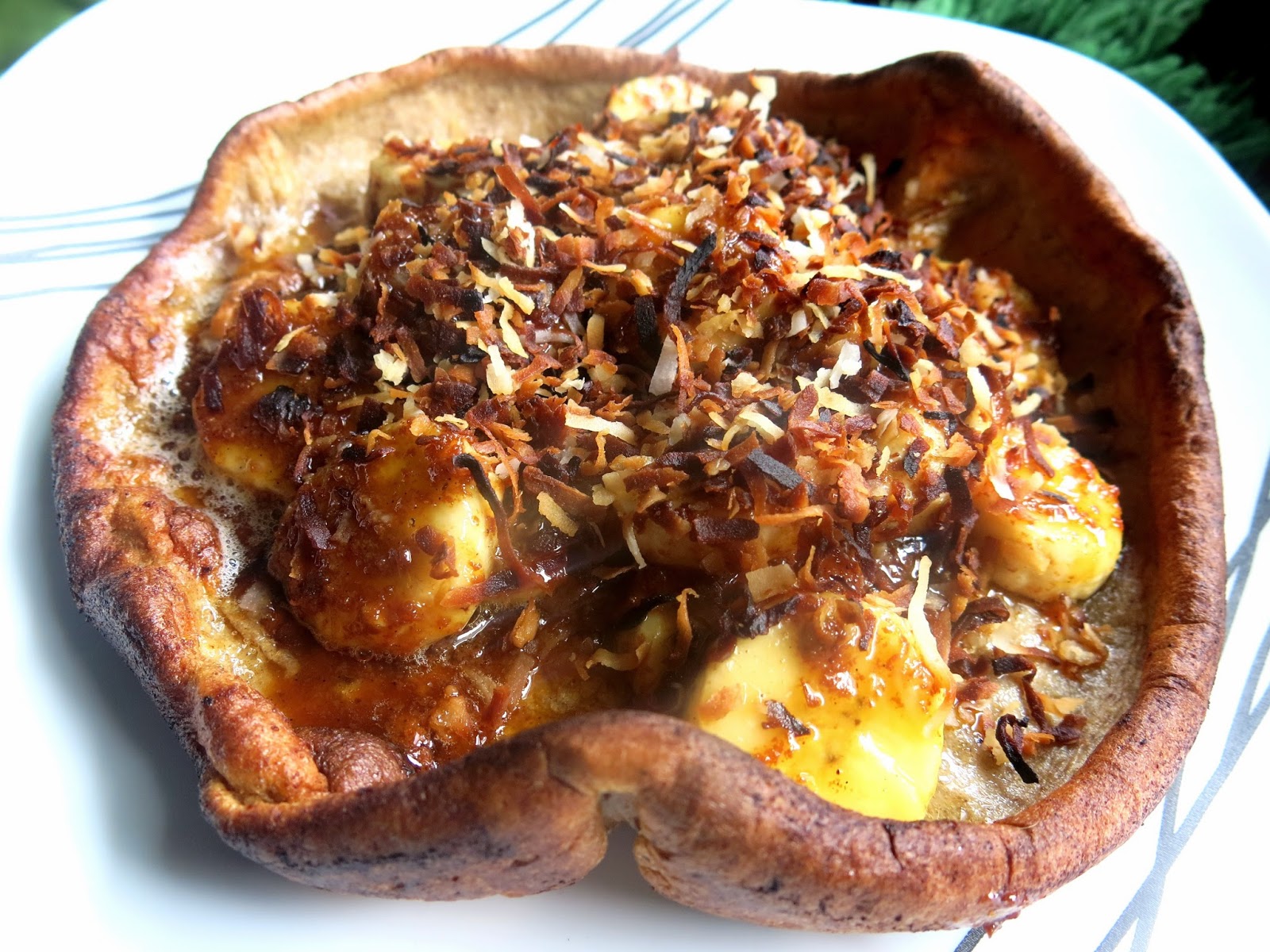 For the Chai Caramel sauce:
For the Topping:
Coconut topping:
Spread coconut thinly over a baking sheet and place under a broiler for a few minutes (this also works really well in a toaster oven) until it begins to turn brown.  Stir the coconut and put back under the broiler and repeat until most of the coconut is golden grown and crunchy.  Set aside to cool

Caramel Sauce:
In a medium sauce pan, add the water and sugar and boil on medium high until all the sugar is dissolved and begins to take on a golden brown color.  In a small bowl, add the Chai spice and vanilla extract to the cream, then slowly add to the caramel a little bit at a time, making sure the cream mixture is fully incorporated and not seizing up the sugar before adding more.  Once all the cream mixture has been added, turn off the heat and add in the salt.  Let sauce cool, then store in a glass container or squeeze bottle. Pancakes:
In a large bowl, mix the eggs, milk, sugar, salt, and Chai spice.  Add the flour slowly and combine for a smooth batter with no clumps.  Let the batter sit at room temperature for 30 minutes.

Preheat the oven to 475 degrees.  Add 2 tablespoons of butter to each of two 9 inch pans (cast iron skillets, pie tins, or cake pans will do nicely) and place the pans into the heated oven for a minute or two, or until the butter is completely melted.  Remove the pans and swirl to coat the sides with the butter, then split the batter between them and put back into the oven for 10-15 minutes, or until the sides of the pancake have puffed up and the center isn't liquidy.  Once cool, remove from the pans carefully and plate.

Mix the sliced bananas with some of the caramel sauce, then put them in the center of the pancakes.  Sprinkle with toasted coconut and serve immediately.

*Optional toppings: finish the pancakes with a sprinkle of powdered sugar or a scoop of vanilla ice cream.
Posted by Bunny and Brandy at 10:51 AM