Trenchermen or The Old and The New 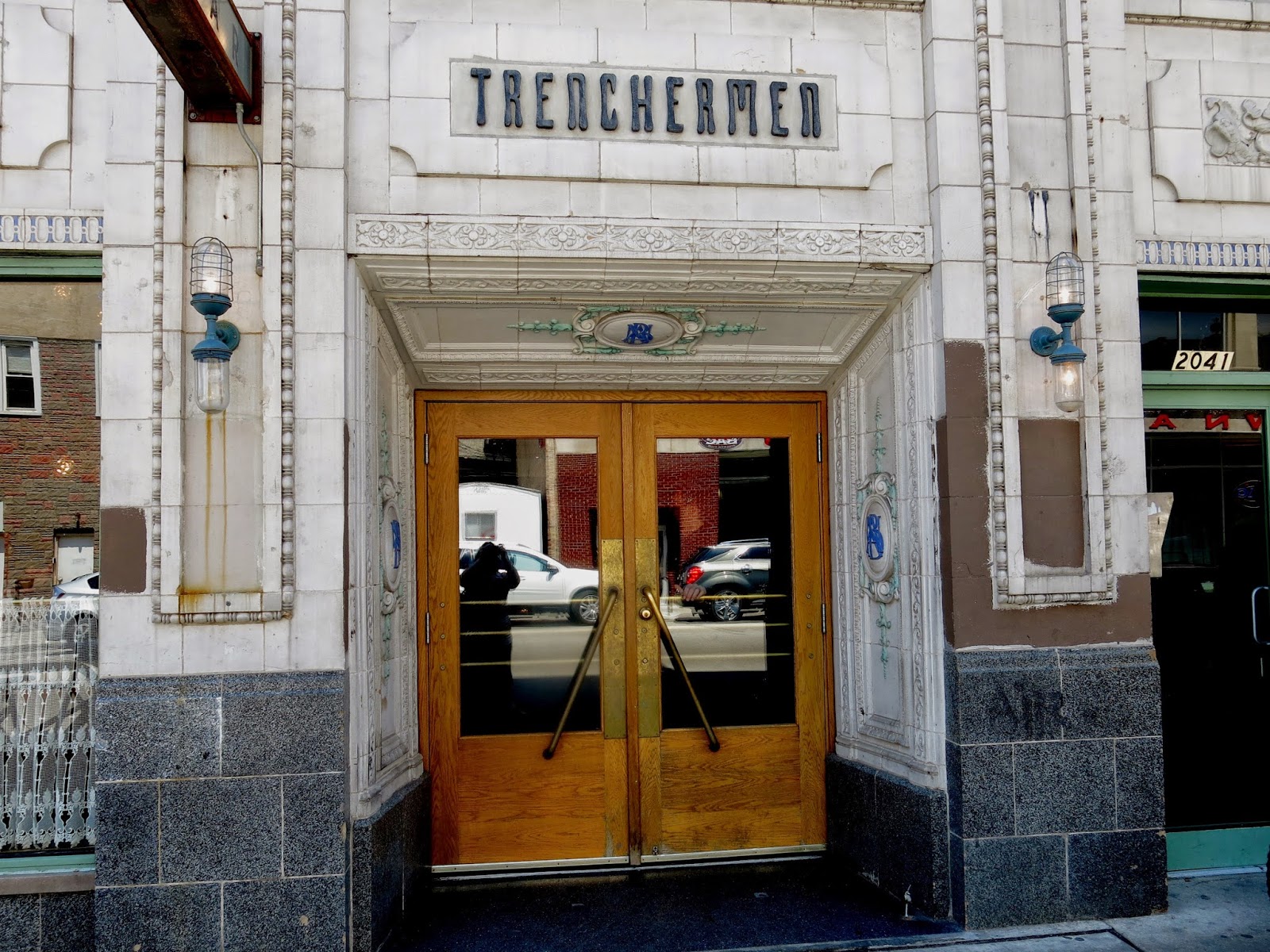 "I'm looking for new ideas," Brandy's old friend Mama Bee told her one day, "My honey empire is going steady, but I'd like to branch into some of these niche markets I've heard so much about."  "I don't understand," Brandy said, "You do well with honey.  Why not just keep doing that?"  "No one wants just plain old honey any more.  They want Orange Blossom Honey or Clover Field Honey or Bacon Honey.  They want everything familiar and every day twisted into something new and exciting!"  "Yes, but those are just fads.  When everyone stops obsessing over the latest food trends, what will they want?  Just plain old honey.  Sometimes the original way of doing things is the best way, if you ask me."  "I don't know.  Why don't I take you out for brunch so we can discuss this a little further."  Of course, Brandy didn't need to be asked twice. 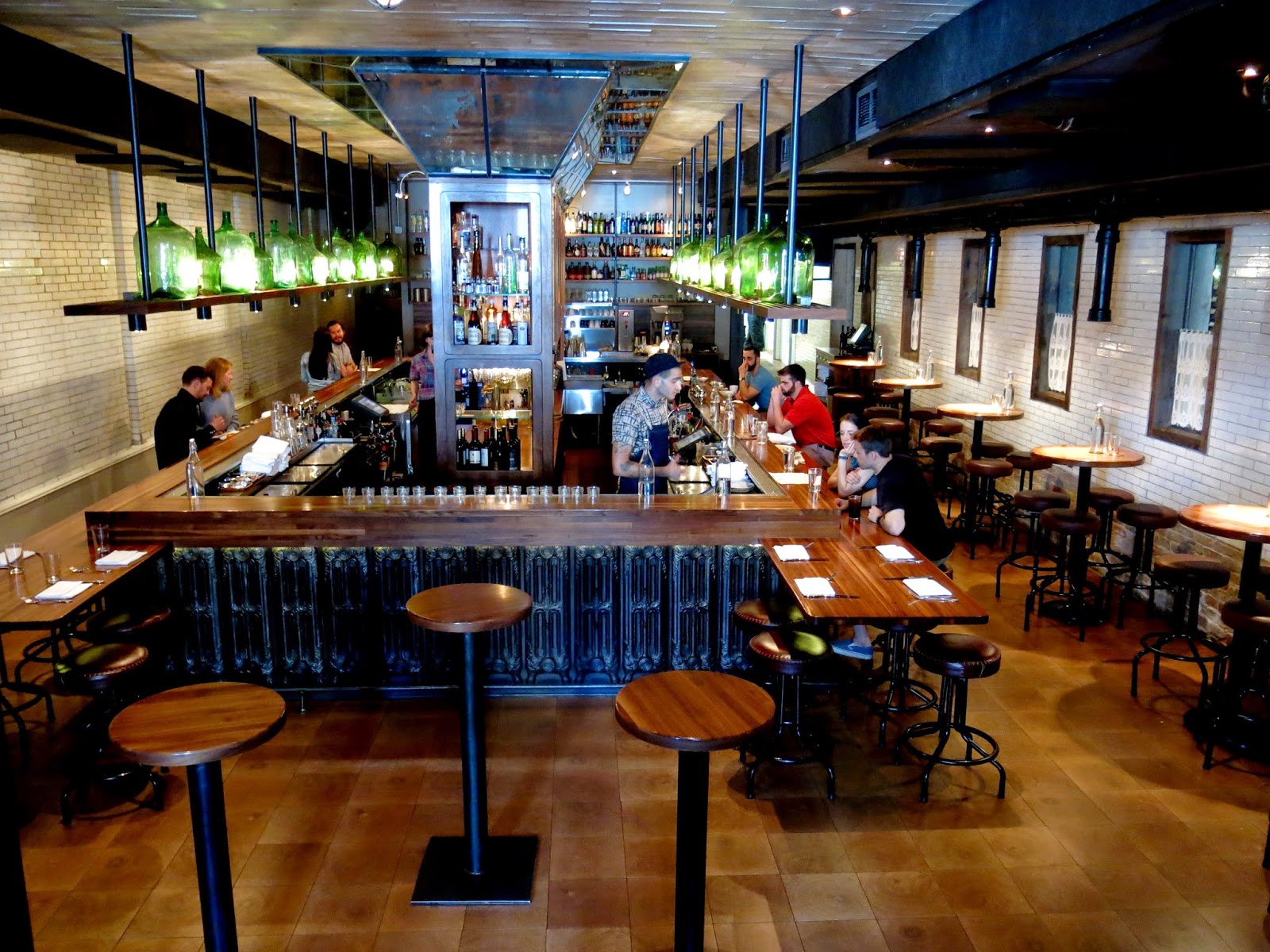 Brandy chose the newest darling of the young and fashionable foodies of Wicker Park, Trenchermen.  Starting out as a pop-up restaurant in 2012, headed by a pair of highly seasoned culinary brothers, Trenchermen has found a permanent home in a space that has seen a lot of history (originally it served as a bathhouse to the Eastern European immigrants in the area, and then underwent several transformations before almost being demolished).  Their stated mission is to make familiar food to old fashioned standards using new and exciting techniques, so its no wonder Brandy thought this spot might be the perfect place to make her point to Mama Bee. 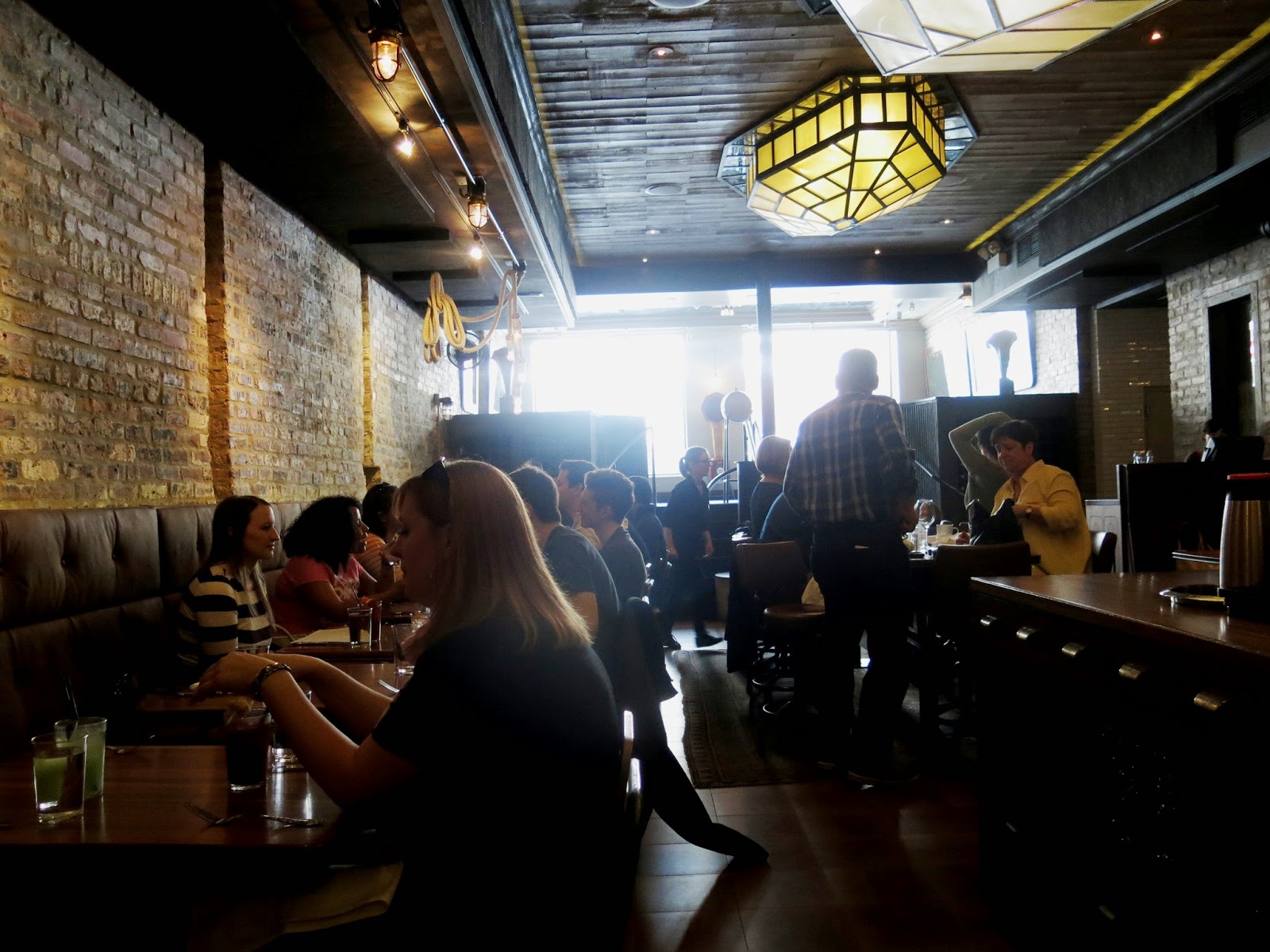 The entrance to to Trenchermen was one of the most impressive that Brandy had ever seen with the patron's first view being of the bar area, which opened grandly a few steps down from the host station.  "Reminds of the tea rooms of old," Brandy said wistfully to Mama Bee, "A little more rustic, perhaps, but just as grand."  The two were escorted to the dining area just beyond the long bar which was rather small by comparison, but not without it's charm.  One wall of the dining room was taken up by an ingenious wine rack that carried through the theme vintage steel work.  Overhead, the lighting fixtures were exposed with long pieces of rope strew across them, as though ready to hoist pieces of a theatrical set into the air, and the heavy wooden tables and chairs looked almost more like butcher blocks.  The overall vibe was one of deliberate and detail shabbiness, not overwhelming, but definitely unique.  Brandy could see the hipster crowd native to Wicker Park approving of the vintage-ness of it all.

Though there were plenty of breakfast cocktails on offer (including shots that weirdly beloved Chicago liquor, Malort), Brandy and Mama Bee were more intrigued by the specially curated tea and coffee.  Brandy went with a nice, soothing Rare Tea Cellar Chamomile, while Mama Bee sampled the current coffee (Trenchermen works with a different specialty roaster each month). 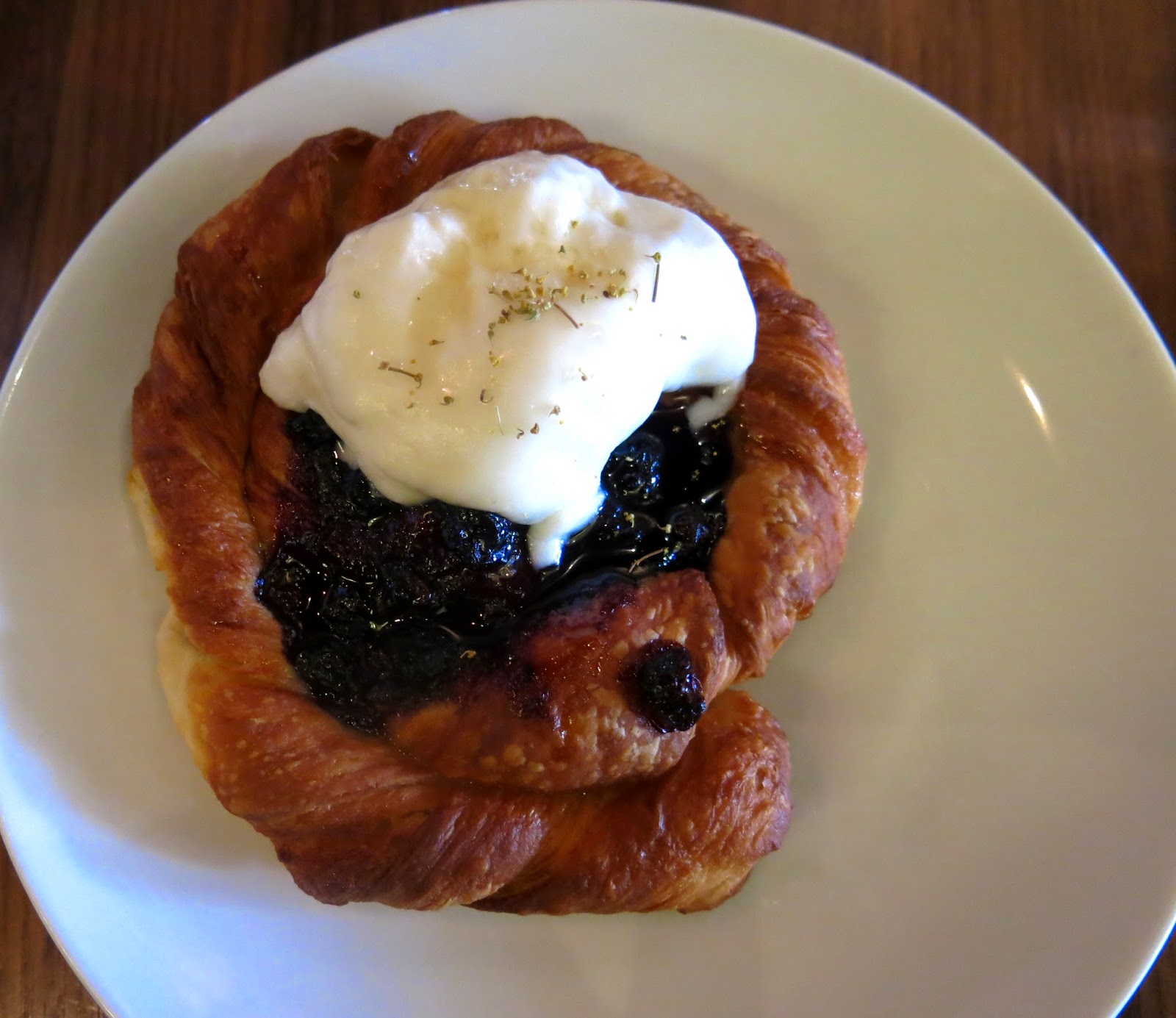 Starting off the meal, Brandy chose the Wild Blueberry and Burrata Danish, a lovely fresh twist on a rather traditional breakfast pastry.  The Danish itself was pretty typical, but done well, with a tender, flaky texture and a warm, buttery taste.  The creamy burrata cheese (similar to a fresh mozzarella) certainly made for a unique choice over a more traditional cream cheese or mascarpone, but matched well with the fresh and tart blueberry compote.  A small sprinkle of dried herb on the top added a nice sophistication to the pastry without adding too much of a savory slant.  "I do appreciate a hearty helping of the cheese and blueberry," Brandy said as she tried to lift the pastry off the plate, "But it does feel a little odd to be eating a Danish with a knife and fork.  The filing is simply too much for the delicate pastry underneath  to support!" 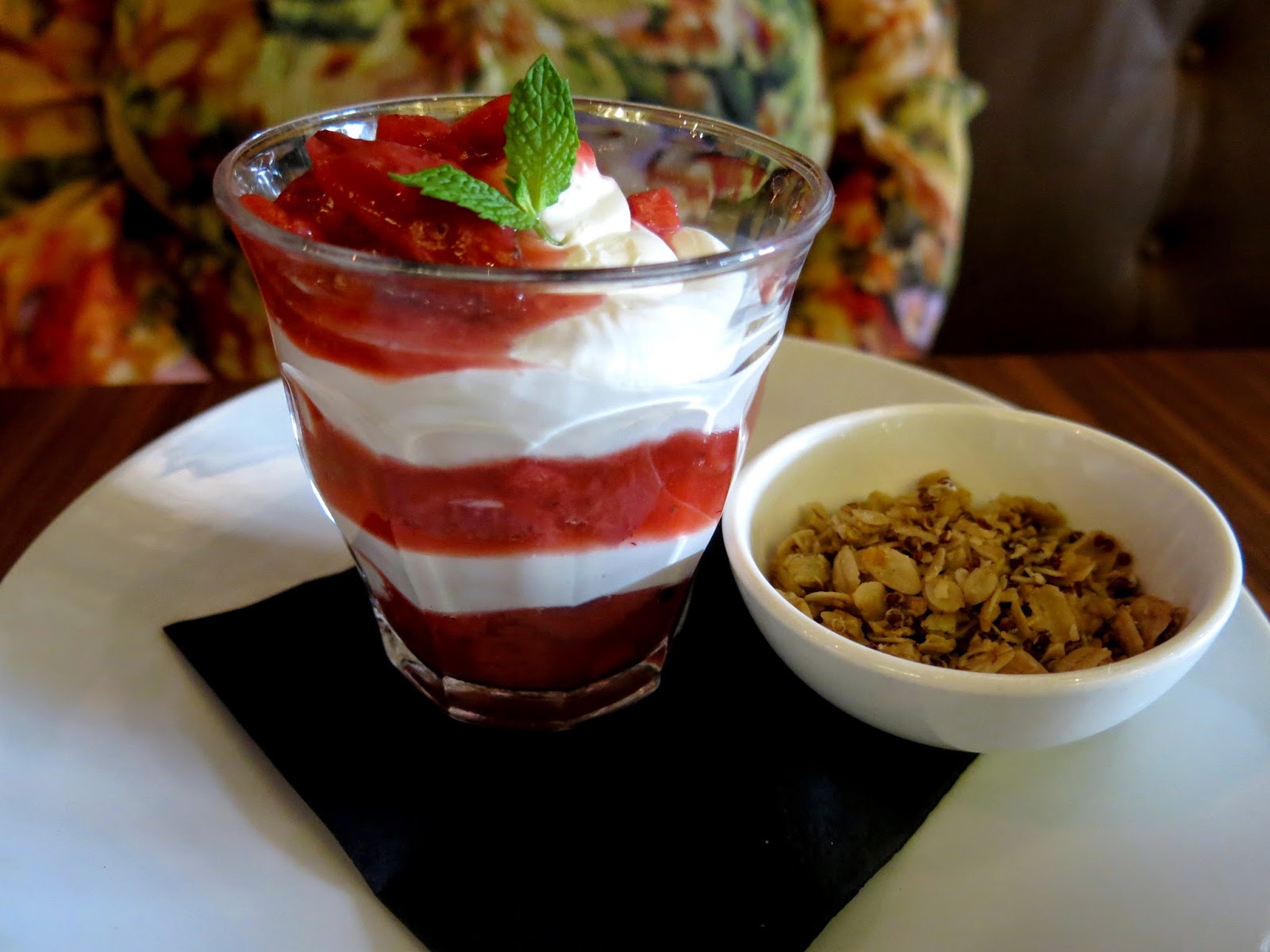 Mama Bee went with the Greek Yoghurt, which came layered with fresh strawberry compote and a side of crunchy quinoa granola.  Again, this seemed to be a very recognizable dish, but with a few added twists to freshen it up.  The house made yoghurt was amazingly thick and creamy with a good tang to it, matching well with the sweetness of the fruit.  The granola, which was dotted with bright red quinoa, had been slightly salted, adding even more complexity to each mouthful.  "You know how I feel about salty and sweet combining," Mama Bee said with a raised eyebrow, "But this is actually a pretty nice combination.  I think I even detect some honey in the compote.  Do you think I should talk to them about buying some of mine?"  Brandy shook her head, exasperated. 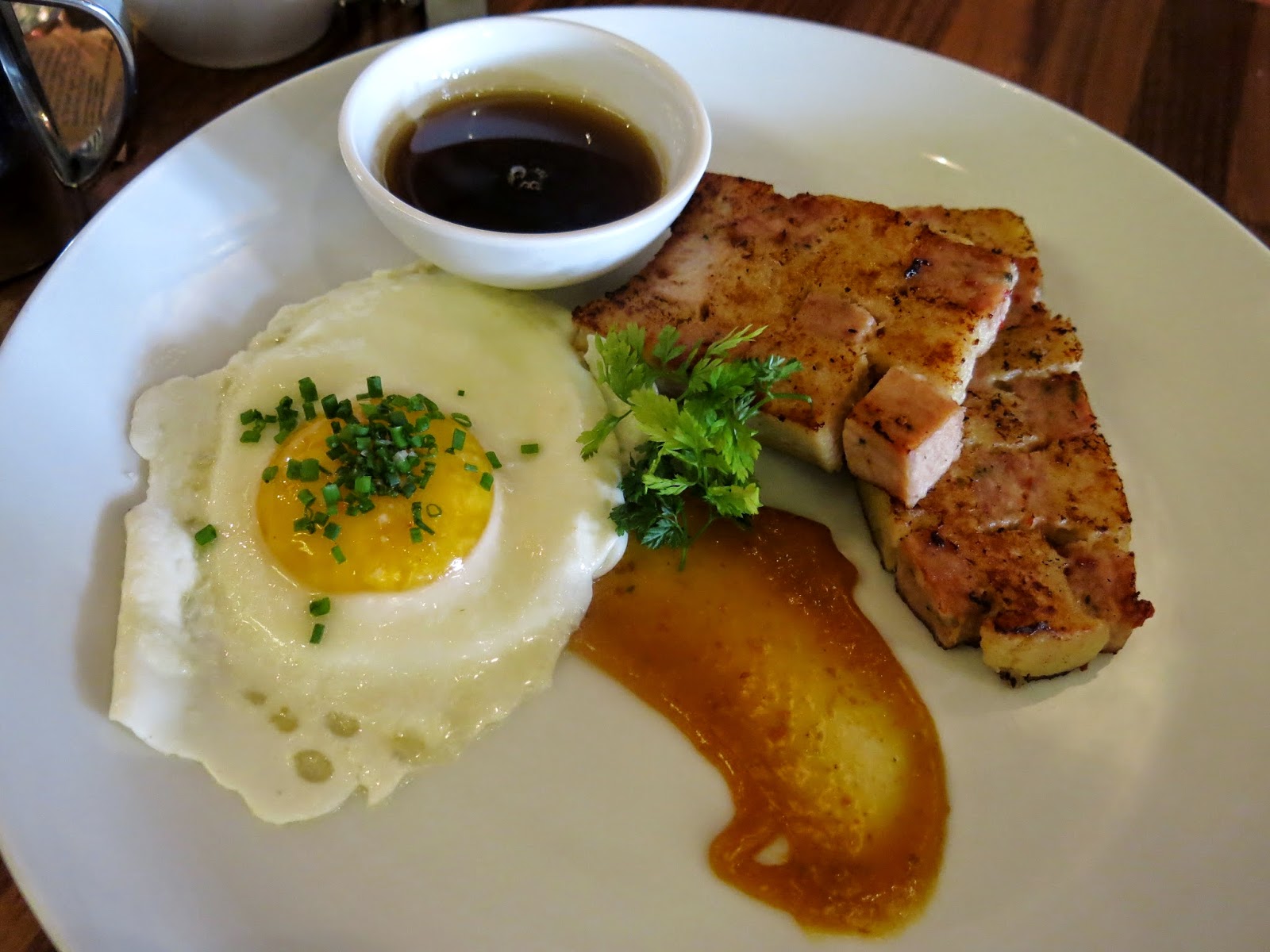 For her entree, Mama Bee decided to continue with the salty and sweet theme and ordered the French Toast and Sausage Strata.  Her plate was beautifully presented, with the bite sized bits of French toast and house made chicken sausage served in checker boarded slices and adorned with a paint of blood orange marmalade and a perfectly over easy egg.  The French toast was very soft and custard like, almost more like a bread pudding, while the sausage packed an uneven punch of heat.  "Some pieces are just fine, but others... wow!  It's quite a spicey wake up call for my tongue!" Mama Bee exclaimed, "But a little dip in some maple syrup seems to tone it down."  The portion size seemed a bit small to Brandy, especially considering the price of the dish ($12). 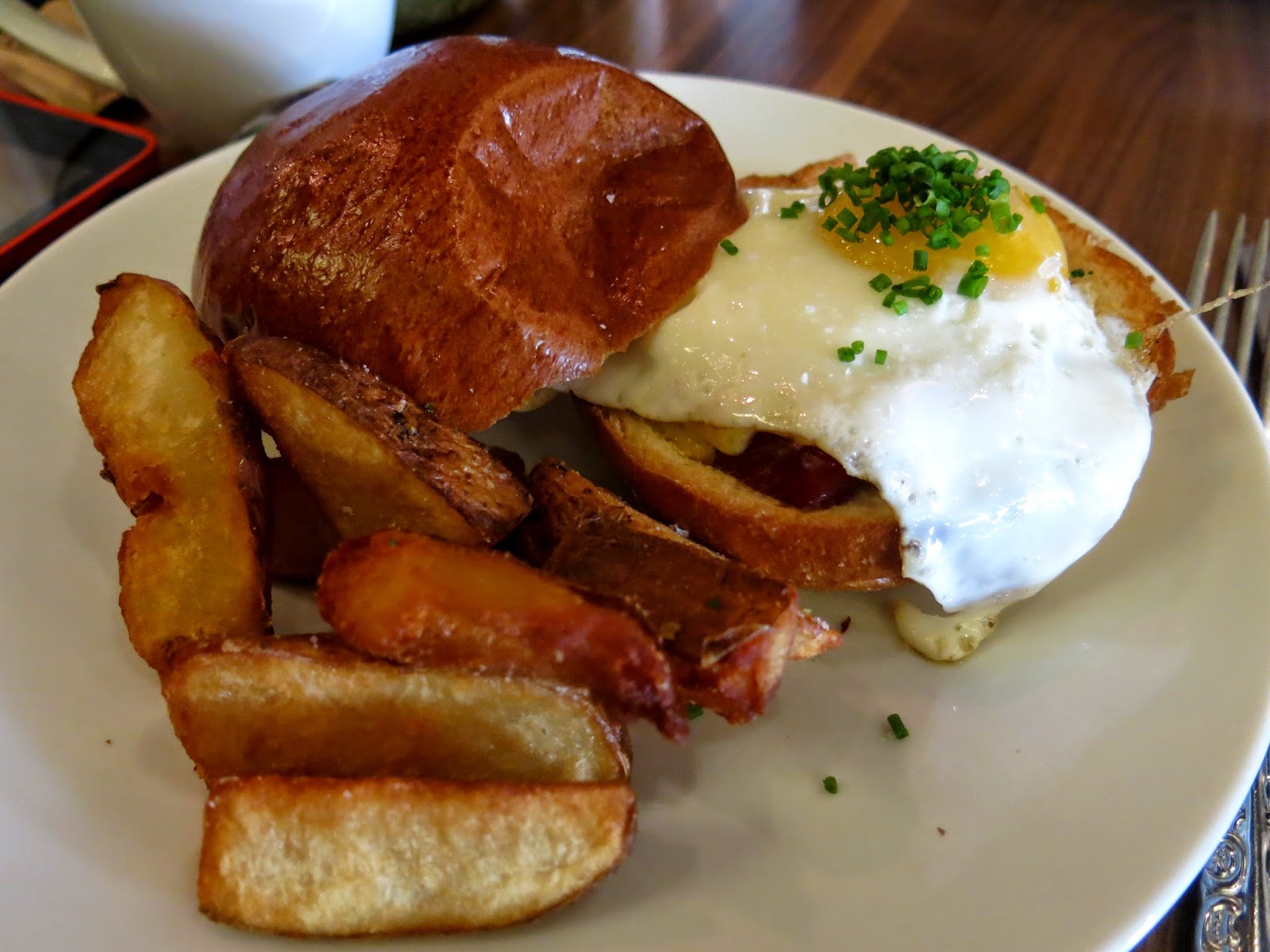 Brandy went with the signature Breakfast Sandwich, which featured the star of the brunch menu, something simply labeled as "Bacon Stuffed Bacon."  "I can't even imagine how that would work," Brandy mused when she first saw the item listed.  The sandwich came a little more rustically presented than Mama Bee's dish with a hearty side of breakfast potatoes.  Though the texture of the potatoes was spot on (a lightly crispy exterior with a velvety smooth interior), there didn't seem to be any flavoring other than an over abundance of salt (in fact, just three bites of the potatoes forced Brandy to finish off an entire glass of water).  The sandwich was served on a very soft, but very stable roll, and came topped with a perfect sunny side up egg and some melty white cheddar.  Once the top went on, the egg burst, coating everything with a sort of self made sauce.  The mysterious "bacon stuffed bacon" seemed to Brandy to be nothing more than a thick, smokey slice of cured ham.  "It doesn't actually taste much like traditional American bacon at all," Brandy grumbled, "In fact, smokey ham is the only thing I can taste on this sandwich.  The cheese might as well not even be there."  As has happened before with such sandwiches, Brandy couldn't help but wish for a little slice of tomato or a few green leaves to help break up the overt richness of the egg and meat.  "I suppose this is what you might call a 'manly' dish," Brandy said, setting the thing down after a bite or two, "And maybe I'm just not man enough for it."

Though the atmosphere was comforting and the service utterly stellar, Brandy couldn't help but feel a little let down by the food at Trenchermen.  With the bill coming to just over $60 after tax and tip for just 2 appetizers, 2 entrees, and a couple of servings of tea and coffee (and no cocktails), the so called "food for the everyman," seemed more like, "food for the everyman on payday."  Although Brandy appreciated that the majority of the ingredients were house made and obviously high quality, in the end, the overall taste was only slightly above average.  "They say they want to be an old fashioned neighborhood joint," Brandy said as she and Mama Bee left, "But what they really seem to be doing is exactly what their hipster clientele do; putting a beautifully thought out facade over what is essentially the same old thing."  "Yeah, maybe you're right after all," Mama Bee sighed, "Bacon Honey might sound good today, but plain old honey will still be my best seller tomorrow." 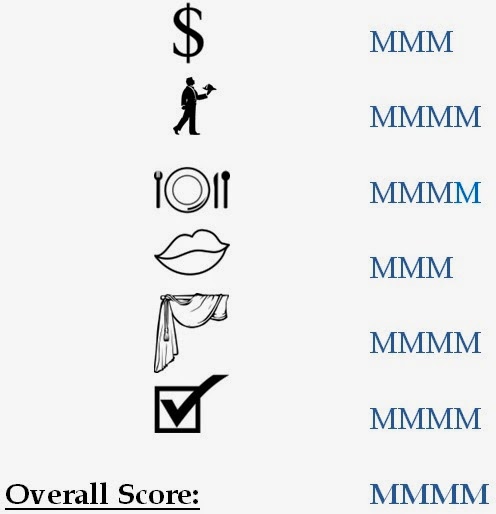