*The writers of this blog have been provided with sample products at no cost by Hamilton Beach for the purposes of writing this review and hosting a giveaway. 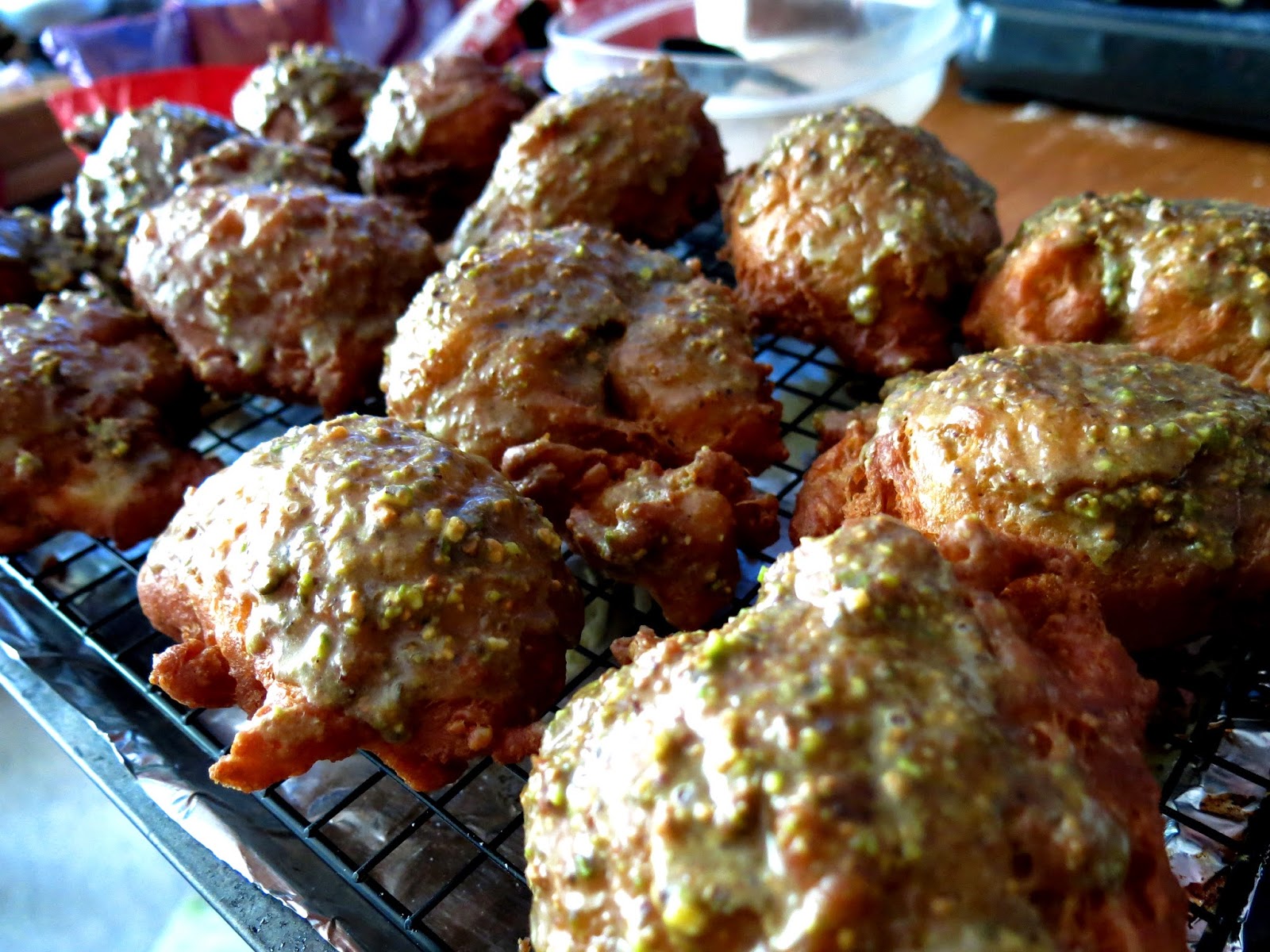 First it was cupcakes.  Then is was bacon.  Now, it seems the trendiest of foodies are scabbling after donuts. But not just any donuts; after Dominique Ansel's Cronut appeared last year, it set off a wave of donut hybrids, culminating recently in Chicago's own Waffles Cafe creating what they call the Wonut (a waffle/donut hybrid, if you couldn't tell).  Never one to follow trends for the sake of it, Brandy has been left confused by this latest fashion.  "What was wrong with the donut in the first place that we need to be breeding it with other pastries?" she asked when first being told of the trend, "I've always found donuts to be pretty damn tasty on their own without any more interference than a few choice flavorings."

To prove this point, she set about creating some donuts of her own, using a simple yeast donut base and sugar glaze.  Her flavoring choices, influenced by the burgeoning spring produce counter in her local grocer, were red pear, green pistachio, and a good quality vanilla (Brandy prefers Nielsen Massey products).  To make both the donuts and the glaze, she utilized two of her brand new Hamilton Beach appliances, The 6 Speed Soft Scrape Hand Mixer, and the 6 Speed Stand Mixer, which helped her fore into fried dough go that much smoother. 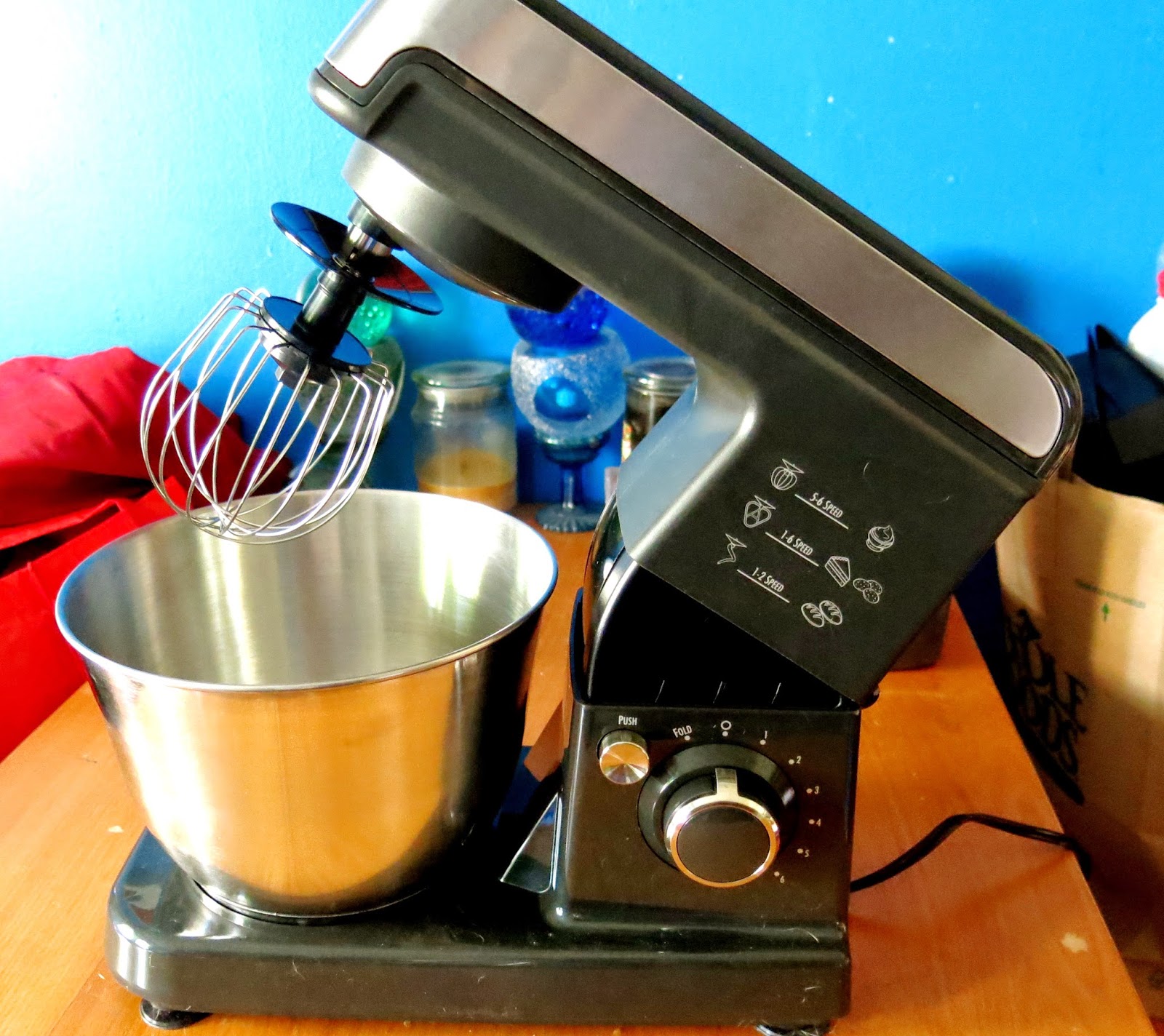 The stand mixer (which comes with whisk, paddle, and dough hook attachments) was an absolute dream to use.  No more would Brandy's biceps become inflamed with whisking and mixing, because this mixer could do everything.  She especially loved the circular mixing action, which helped to incorporate ingredients completely with minimal scraping down of the sides of the bowl, a real help in a yeast based recipe, which creates a rather sticky dough.  Also helpful were the suction cups on the bottom of the appliance, that helped it stay in one place while replacing attachments, unlocking the bowl, and even when on the highest speed.  Though a little bulky looking, the mixer was actually very light weight, making it easy to move from counter to storage when everything was done.

The hand mixer came with two sets of whisk attachments, one which had been coated in rubber so that the whisks themselves also became like a spatula, scraping down the sides of the bowl while Brandy mixed the sugar glaze for the top of the donuts.  The included plastic case also provided a convenient place to store all of the attachments, the chord, and even the mixer itself (its just snaps on to the top of the case).

The results of Brandy's experiments were quite the success with all of her Quilting Society chums.  "Cross a donut with what ever you like," she said as they chomped down on the pillowy pastries, "But there's not many ways you can buggle up a ball of fried sugary dough, so best to keep it simple."  Though she couldn't share her batch of deliciousness with her readers, Brandy does have a few surprises in store for all of you!  But before we get to that, here is Brandy's recipe for Red Pear Donuts with Vanilla Pistachio Glaze: 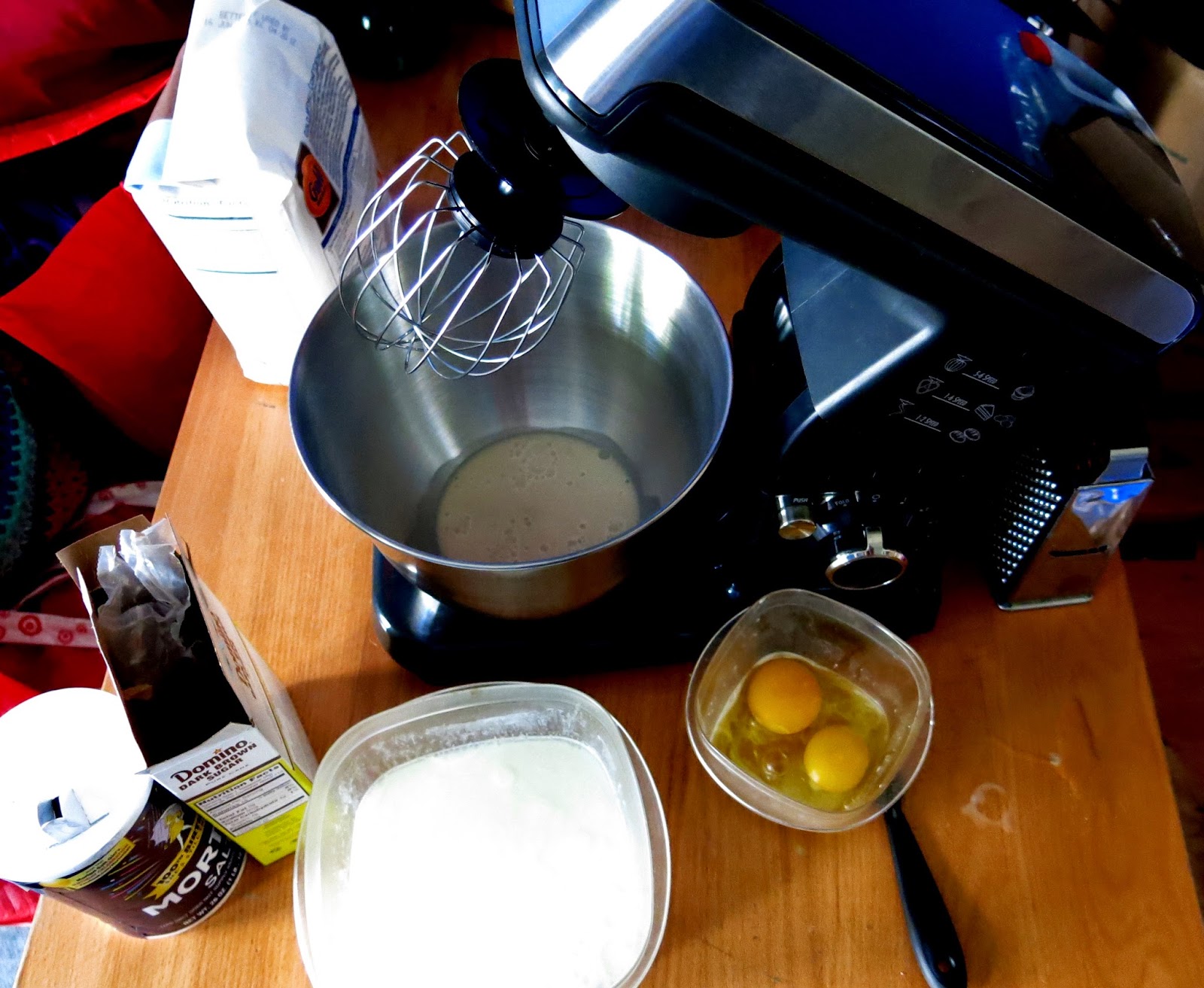 Pour the milk into a microwave safe dish and heat for about a minute until milk is hot, but not boiling.  Place the shortening in a bowl and pour warmed milk over it. Set aside.

In a small bowl, combine the yeast and the warm water and let dissolve for 5 minutes. After 5 minutes, pour the yeast mixture into the large bowl of a stand mixer and add the cooled milk/shortening mixture. Add the eggs, sugar, vanilla, salt, shredded pear, and half of the flour. Using the paddle attachment, combine the ingredients on low speed until the flour is incorporated and then turn the speed up to medium and beat until well combined. Add the remaining flour, combining on low speed at first, and then increase the speed to medium and beat well. Change to the dough hook attachment of the mixer and beat on medium speed until the dough becomes smooth and uniform.  Transfer to a well-oiled bowl, cover, and let rise for 1 hour or until doubled in size. Punch down dough, then cover and let rise for another 30 minutes.

Heat the oil in a deep frier or large stock pot.  Using a large spring action ice cream scoop, gently drop balls of dough into the oil, 3 to 4 at a time. Cook for 1 minute per side, or until golden brown. Transfer to a cooling rack placed in a baking pan and lined with paper towels to absorb any excess oil.  Allow to cool for 15 to 20 minutes. 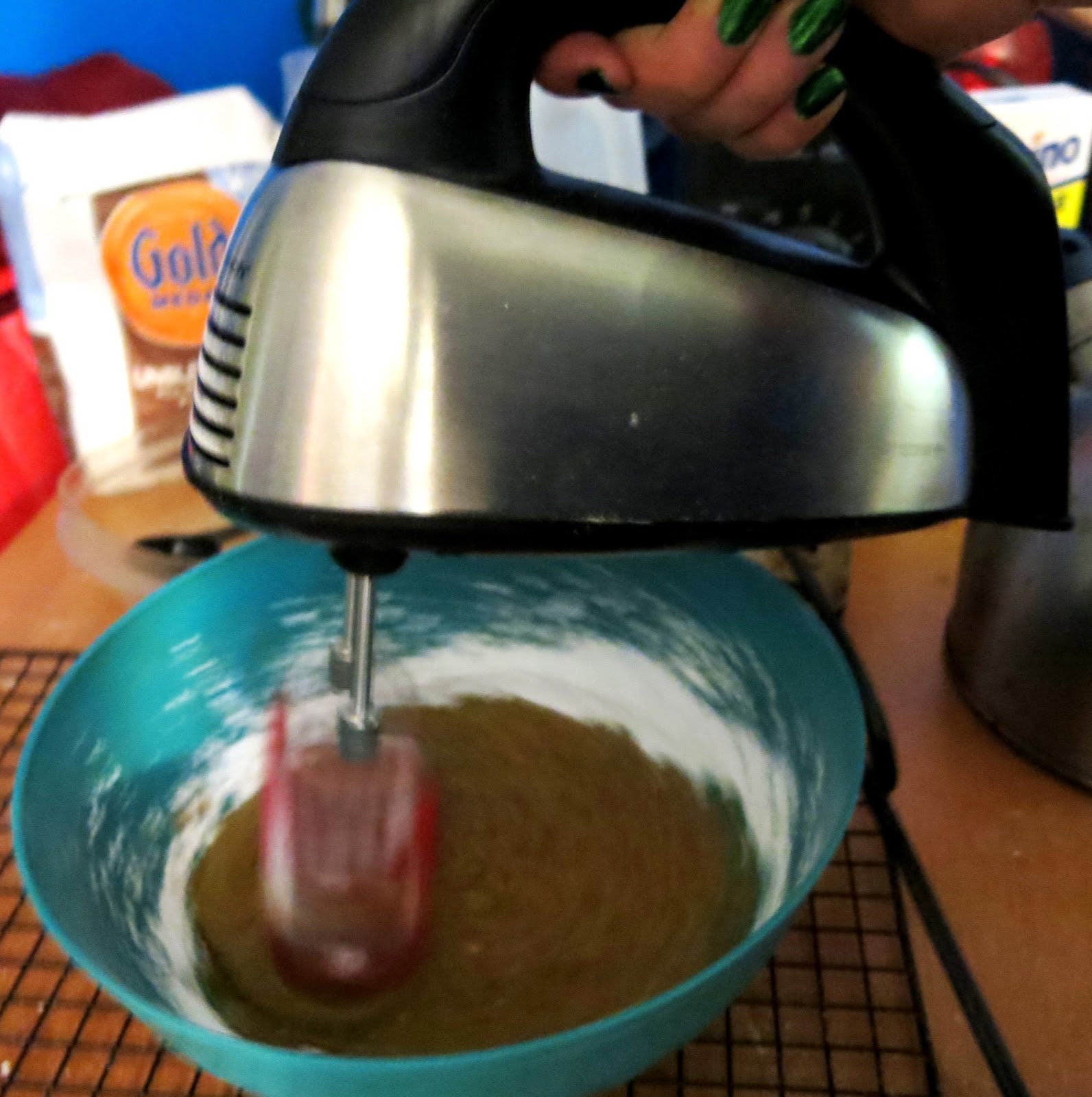 Fill a large syringe or pastry bag with the custard and inject a small amount straight into the middle of the doughnut, slowly pulling the syringe back as you lessen pressure on the plunger.  Glaze the doughnuts and let set for another 30 minutes or until the glaze has hardened.


Combine all ingredients in a medium sized bowl and mix with a hand mixer on medium/ low speed until the icing has a uniform consistency, about 2-3 minutes.  Dip the top of the doughnuts into the icing, then place on a rack to let excess icing drip off.  Let the glaze harden approx 30 minutes.


And now for the moment you've all been waiting for, the GIVEAWAY!  Below this paragraph, you will find our handy dandy Rafflecopter widget, which will list all of the ways you can enter.  This contest is open to all USA readers over the age of 18 and will run for one week with the winners being announced next Friday, May 9th before 12:00pm CST.  There are three prizes to be won: 1st place gets a brand new Hamilton Beach 6 Speed Stand Mixer (retail value $129.99), 2nd place will get a brand new Hamilton Beach Hand Mixer (retail value $34.99) and 3rd place will get 5 certificates for free Fresh Cut Fries at any participating Penn Station Subs location!  Good luck!


a Rafflecopter giveaway
Posted by Bunny and Brandy at 8:32 AM