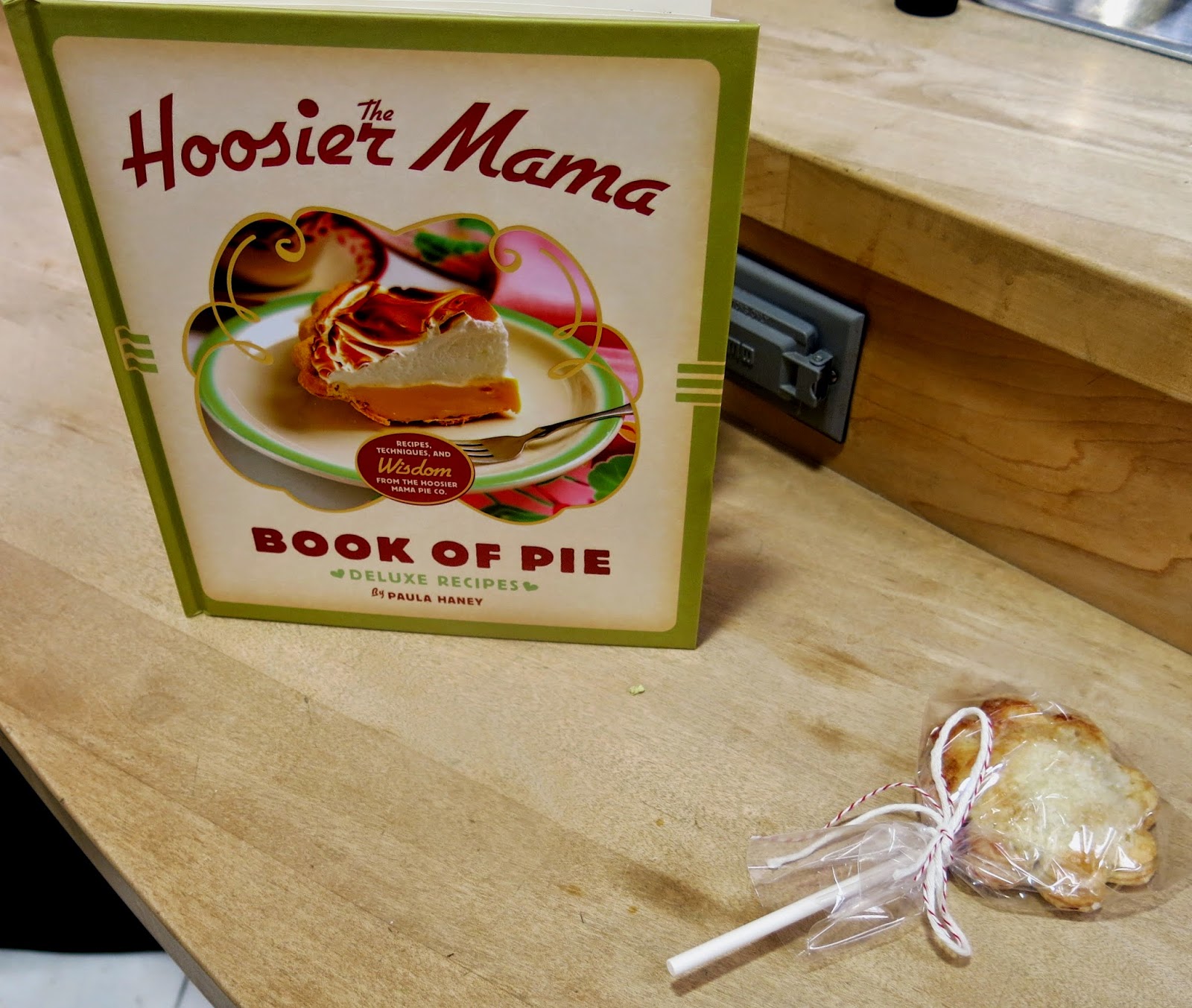 It has been said that an objective observer is always more qualified to become an expert in any particular subject, and if that holds true, then Brandy, as an observant outsider, can certainly be called an expert on American culture.  Though she has traveled the world extensively and lived in the USA for quite some time, Brandy's quintessential Britishness still seems to hold true in most cases, but there are a few cracks that have begun to appear over the years, such as a liking for grilled sausages on buns in the summer time, an actual understanding of the differences between American and National League baseball, and a certain fondness for the music of Big and Rich (which Brandy will deny wholeheartedly, if confronted directly). 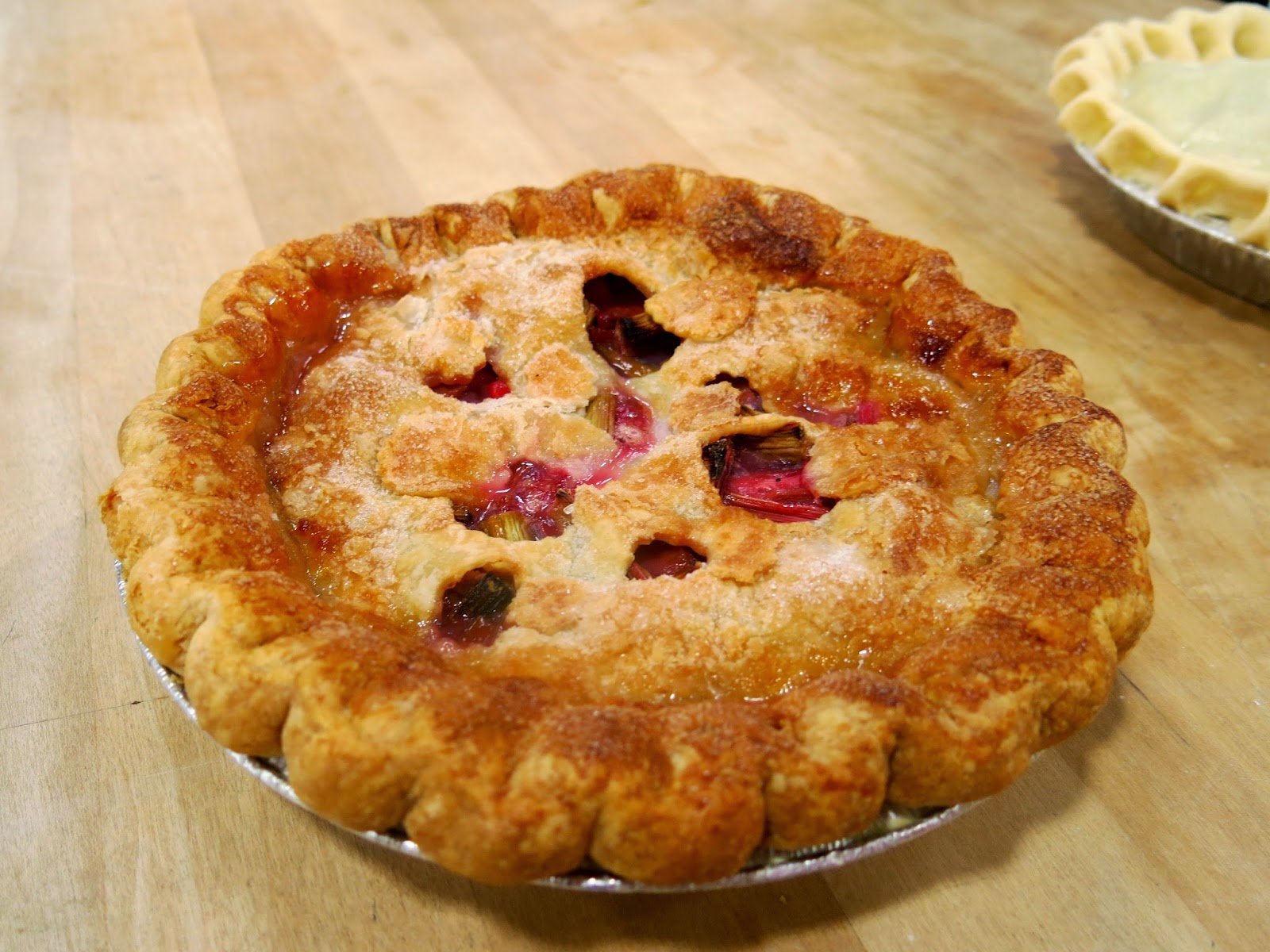 One American institution Brandy will admit to adoring is Macy's, especially that venerable old and impossibly beautiful store on State Street that once upon a time was the storied home of Chicago's iconic Marshall Fields.  Recently, Brandy learned that Macy's was launching into summer with their American Icons campaign, celebrating everything that is quintessentially American, from music to cuisine to fashion.  Kicking of the campaign was a series of amazing events that included performances from jazz singer Erin McDouglad, Chicago Dance Company, and Motwon: The Musical, a cooking demo from Hoosier Mama Pie Company, a men's fashion show hosted by Details Magazine, and a summer entertaining party featuring exotic cotton candy from Spin-Spun and fun mocktails from Tim Williams of Pour Souls.  Music, candy, cocktails, and pie was something Brandy just couldn't say no to. 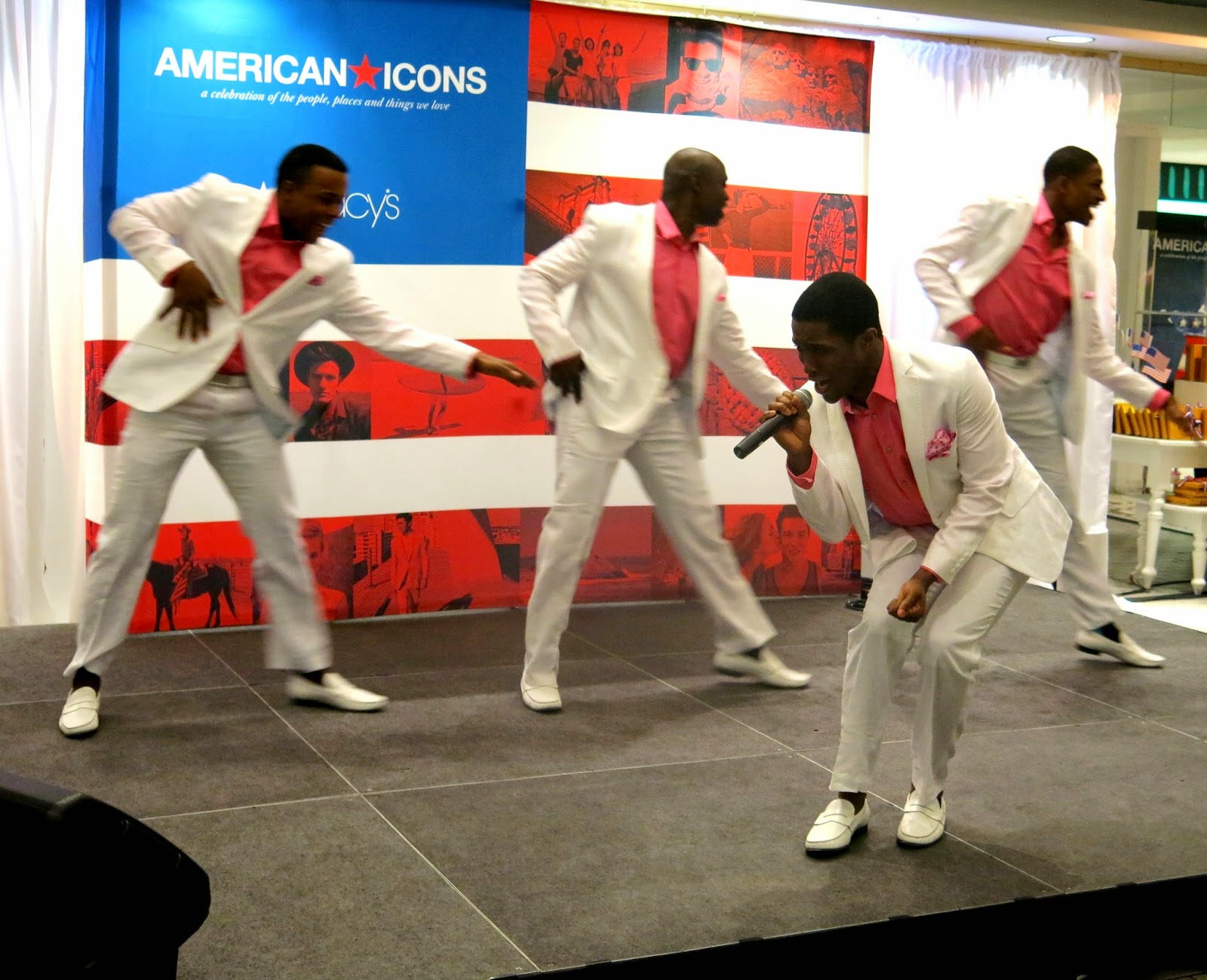 Starting at 12:00 on the dot, performers from Motown: the Musical (currently playing at the Oriental Theatre downtown) took the stage on the lower level to invoke the spirit of the 1960's Detroit with dead on imitations of The Supremes, the Temptations, and other oldies favorites.  The crowd quickly got into the performance, especially when one of the male singers grabbed an elderly lady to dance with, who surprised everyone (including the performers) by dropping to the floor in a split!  "I could do that, if I wanted to," Brandy informed the people standing near her, "You might hear a lot of metallic creaking from my titanium hips, but I could do it." 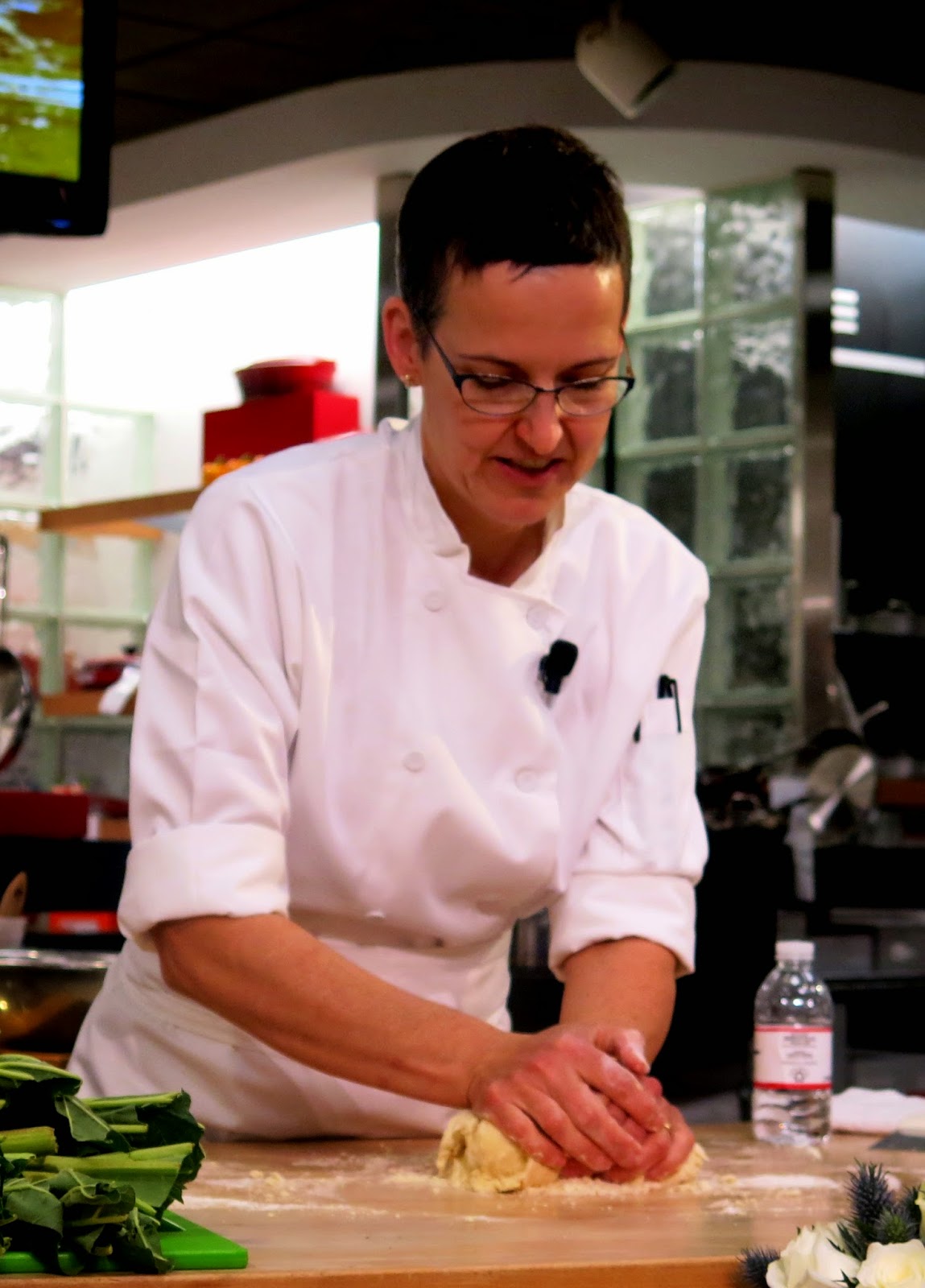 Then, as the Erin McDouglad Jazz Quartet took the stage to serenade shoppers with classic jazz standards, Brandy grabbed a seat for the cooking demo from Paula Haney of Hoosier Mama Pie Shop.  The demo started off with a wonderfully detailed description of how Paula makes the pie crust dough for all of her confections.  "I've done a lot of experimenting over the years and I've got it down to a science," she said, admitting that even though her recipe had only 5 simple ingredients, an entire chapter of the the Hoosier Mama Book of Pie was dedicated to the making of the all important crust.  Going through the specifics, like the type of salt she uses, the amount of sugar, and how she treats her butter to get the perfect flaky texture, showed just how much work Paula has put into the recipe and just how proud she is (and should rightly be) of that work. 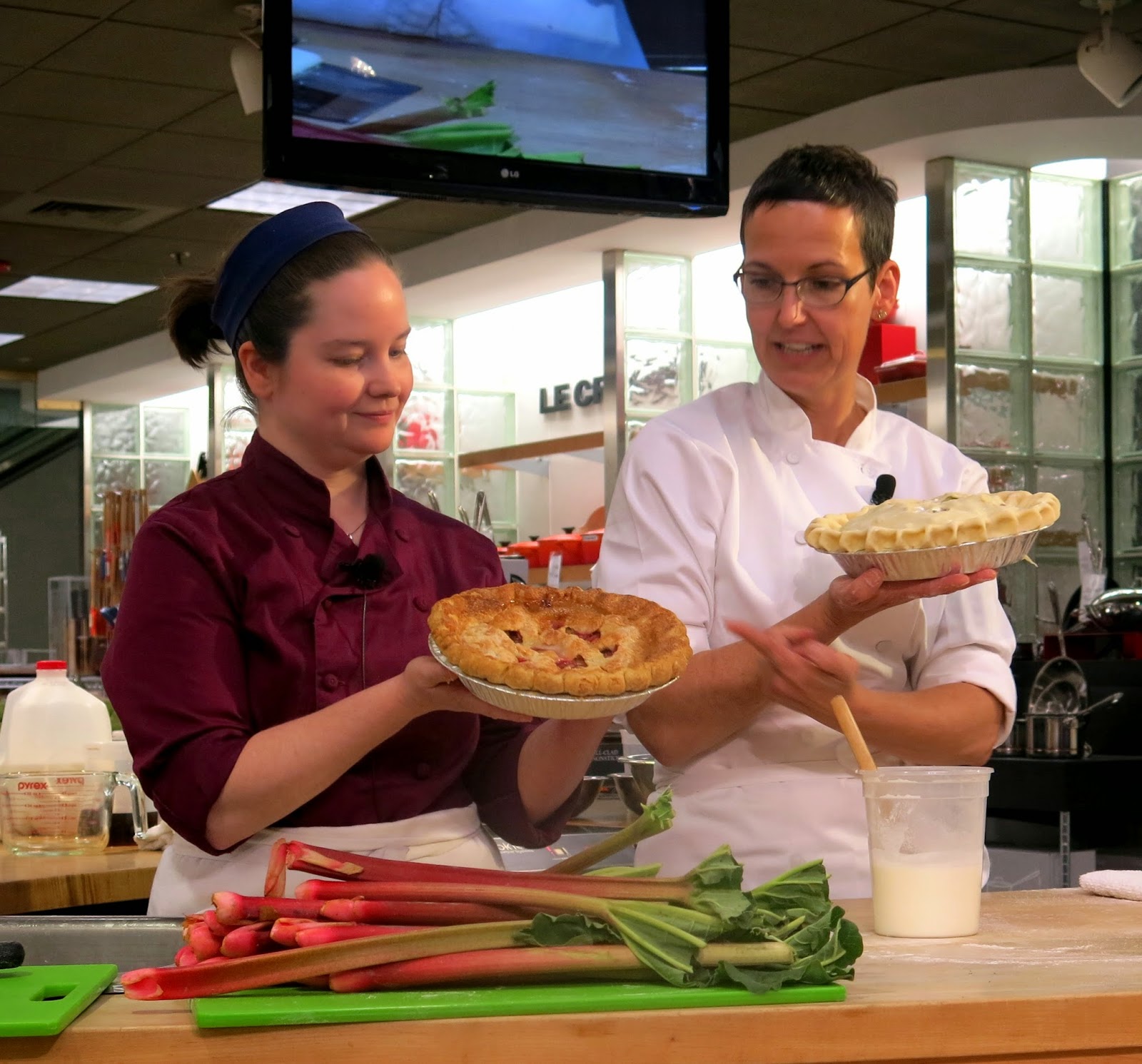 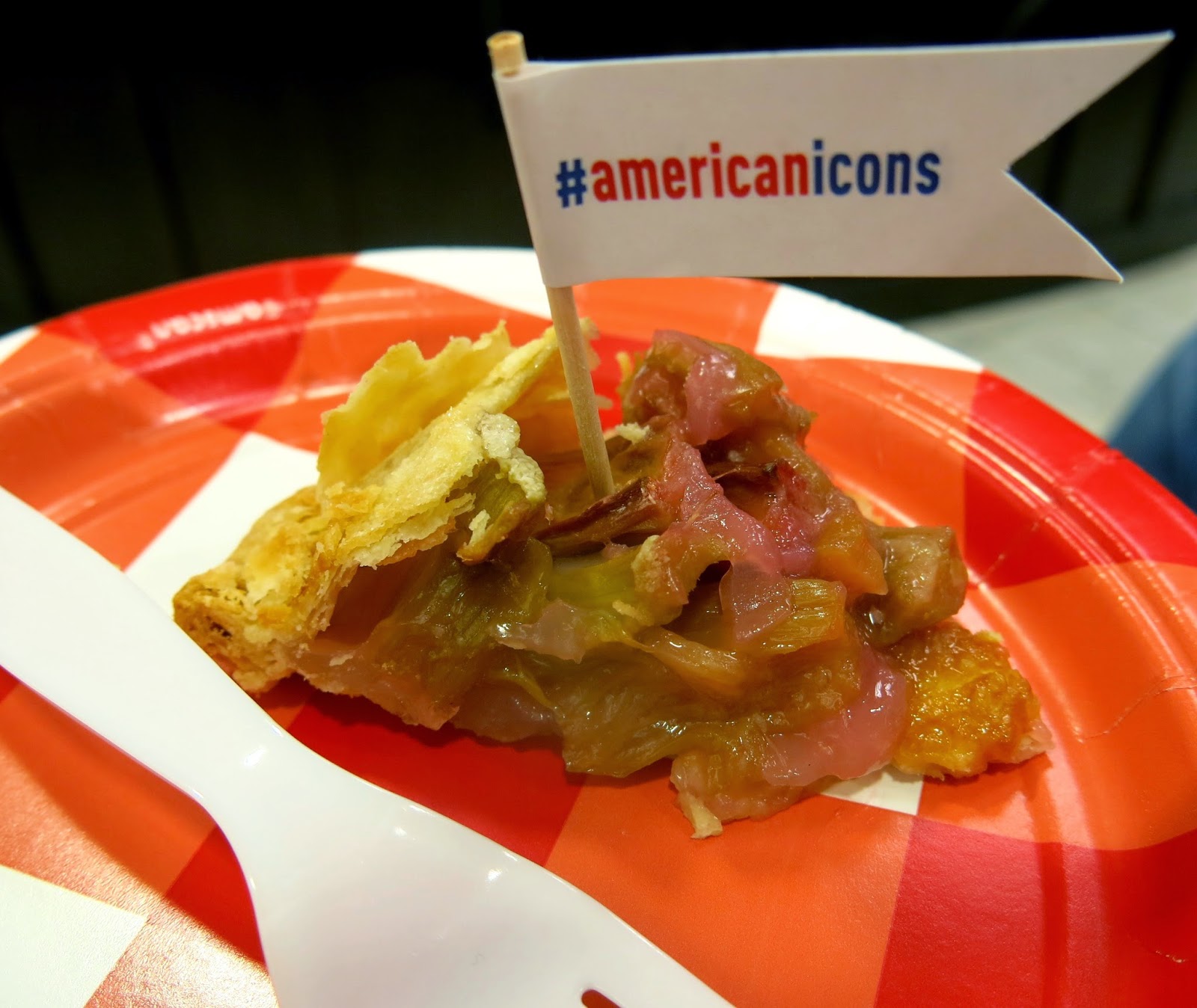 Next Chef Paula showed how to make a very simple rhubarb filing, which had both a sweet and tart flavor and was perfect for summer.  Just watching her crimp the pie crust by hand was enough to hypnotize the audience and kept most of the crowd in their seats, even after the Chicago Dance Company took the stage behind the demo to put on a show of modern, contemporary, and jazz dance.  "It's nice that they gave us backup dancers," Chef Paula joked with her comrade Allison Scott, who takes charge of all the savory recipes for Hoosier Mama. 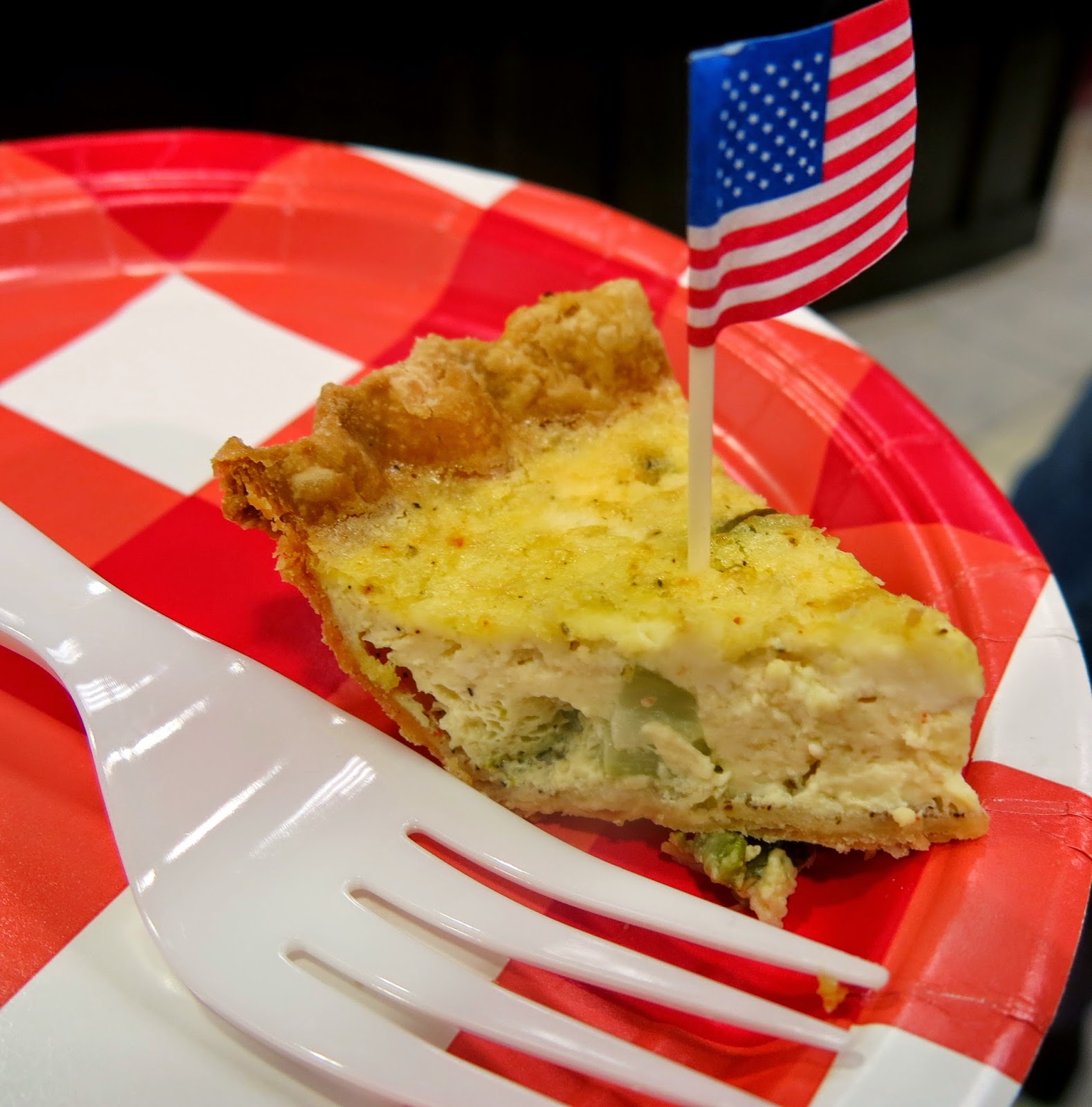 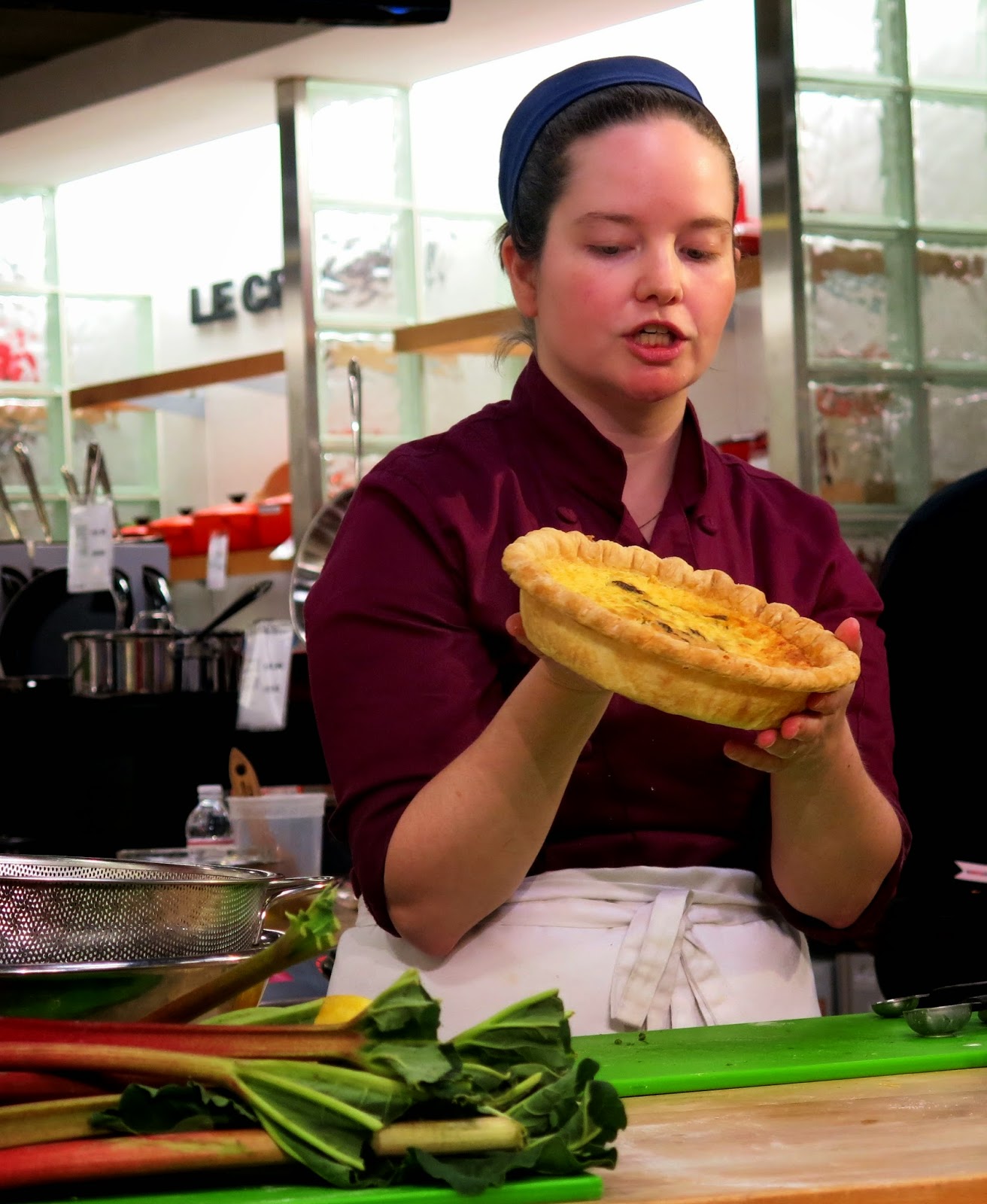 Next, Chef Allison took the lead by demonstrating how to make a fresh and simple asparagus and ricotta quiche, even making her own ricotta live in front of the crowd.  Samples of the quiche were passed around so that everyone could experience its silky texture for themselves.  "The best part is, you can adjust this recipe for any season," Chef Allison said, "Asparagus is in season right now, but you can use any vegetables you'd like.  At the shop right now we're doing a bacon and cheddar quiche, a mushroom gruyere quiche, and a pea and ramp quiche." 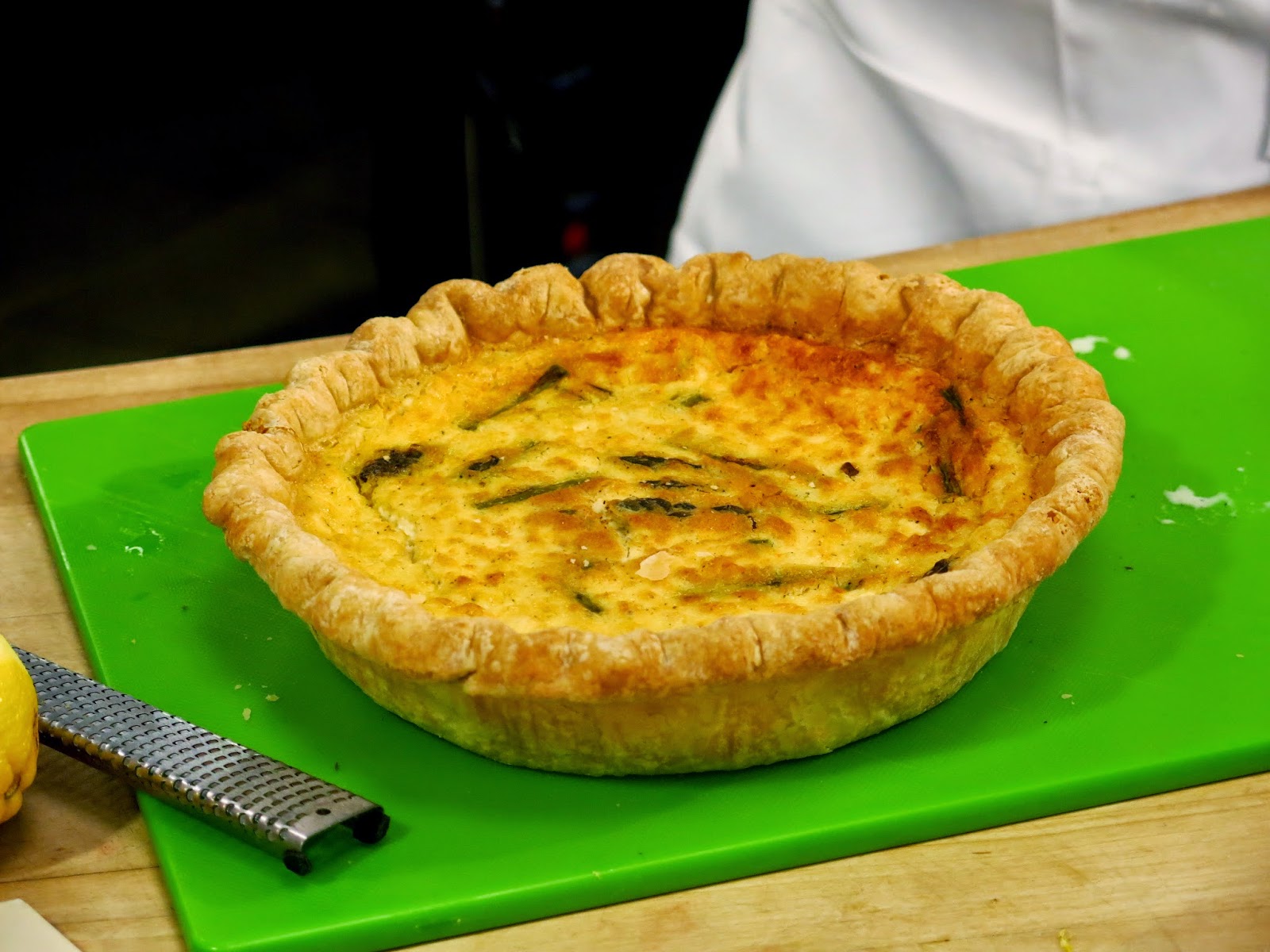 After the demo ended, Brandy had a few more hours to pass before the second round of events began.  Unfortunately, she mistook the bedding department for "One of those trendy nap boutiques I've heard all about," and fell asleep on a Martha Stewart Home display until just before the store closed.  The good news is that Macy's is hosting another round of events this Saturday including face painting for kids and a fashion show from INC.  "And if there's anything more American than shopping till you drop," Brandy said, "Than I'd like to know what it is."

You can see tons of pictures from yesterday's events on Bunny and Brandy's Facebook page!

The writers of this blog have been compensated by Everywhere Society for the information contained in this post, but the opinions of the writers have not been dictated or influenced.
Posted by Bunny and Brandy at 10:43 AM