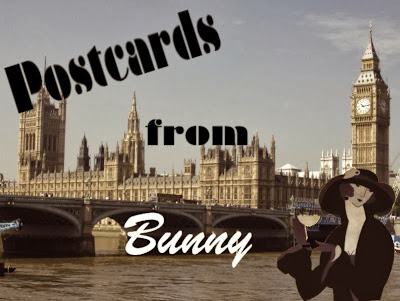 After Bunny's little surprise for her on Thanksgiving, Brandy suddenly found herself with a house full of Portuguese handball players who didn't seem to understand that they'd vastly over stayed their welcome.  "Well, what have you been feeding them?" Bunny asked over a crackly phone line (she was deep inside a cave at the time).  "Turkey, of course!  That's all they want to eat, thanks to you," Brandy moaned.  "Well there's your problem!" Bunny laughed, "You need to feed them something else and then they'll know its time to leave.  Try some Swedish food."  "Swedish food?"  "Yes.  Their last big defeat was at the hands of the Swedish team, so it will definitely send a message." 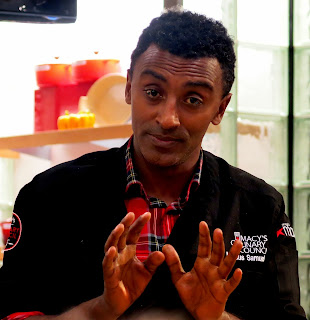 Not knowing enough about Swedish home cooking to make a convincing meal (and not wanting to trek all the way out to the IKEA in Schaumburg for some frozen meatballs), Brandy did a little bit of research and quickly found out that world famous chef, Top Chef Master, Macy's Culinary Council member, and nice judge on Food Network's Chopped Marcus Samuelsson was giving a demo at Macy's on State Street.  Though Marcus was Ethiopian born, he was actually raised by a Swedish family, making his culinary perspective particularly unique. 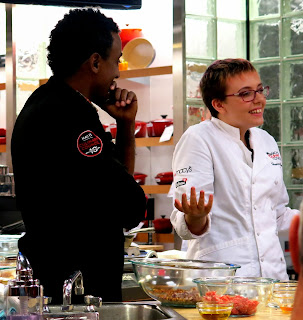 Chef Samuelsson was also at Macy's that day as part of a partnership with the Make a Wish Foundation, granting the wish of one particularly awesome young lady named Sara who had been diagnosed with Non-Hodgkins Lymphoma and wanted nothing more than to be a chef.  Chef Samuelsson spent a good part of the morning with her, teaching her various techniques and letting her taste the wears from his burger joint on the  seventh floor food court, then had her assist him in his demonstrations by doing a little bit of prep work and helping to hand out food to the crowd. 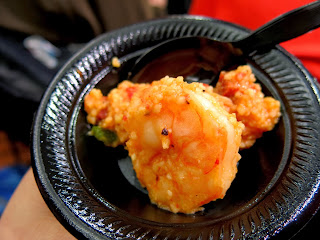 The first dish on the docket was a Couscous Paella with Shrimp.  Though not very Swedish in nature, Chef Samuelsson's motive for making a dish like this was more to use holiday leftovers in a creative way.  "Did you know we throw out about 40% of our leftovers, especially during the holidays?" he asked the crowd before launching into the recipe, which he said could be adjusted to fit any meats or vegetables one has lying around.  His paella had a spicy kick from some mild peppers and a hearty chorizo sausage.  By using couscous instead of a traditional rice, Chef Samuelsson added a more interesting creamy texture to the dish as well as making it more international feeling. 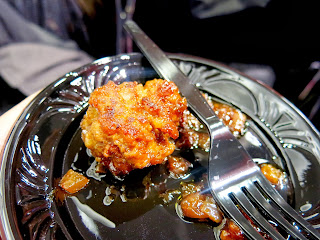 Next up was his grandmother's recipe for Meatballs. which he suggested serving with a carrot and apple mash.  These meatballs were not what Brandy expected at all, as Chef Samuelsson coated them in a sweet barbecue sauce instead of gravy, which matched well with the sweet mash.  "You can make mash out of any root vegetables for a nice change of pace," he instructed, "Don't give potatoes all the attention." 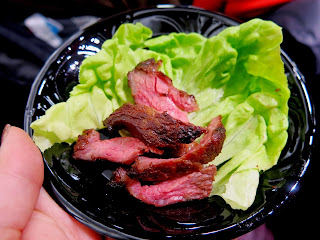 Lastly was a very simple Korean style Short Rib, which was marinated in honey, soy sauce, and spices over night and then grilled and sliced.  Chef Samuelson served the tender slices of beef on leaves of lettuce, which provided a nice contrast of cool crispness to the slightly salty and tender beef. 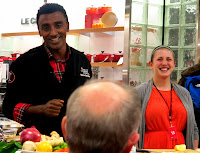 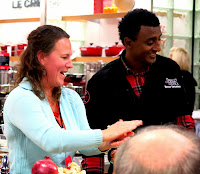 Though initially there to learn how to cook Swedish food, Brandy soon fell in love with Chef Samuelsson's charm and international fusion skills.  He liked to emphasize including all of the family in cooking meals and did this by inviting several members of the audience to cook with him during the demo, including one young lady who had just started on the line at fellow Culinary Council member Stephanie Izard's restaurant, Girl and the Goat.  Chef Samuelsson also delighted the crowd by telling stories about his culinary adventures, like cooking for President Barack Obama (when asking his mother's advice on the occasion, she told him, "Leave before you mess up.") and asking them to name their least favorite judges on Chopped, then threatening to call said judges to tell them the crowd's opinion.

Not sure what to do upon returning home without the Swedish recipes she'd hoped for, Brandy chose to prepare what she had learned anyway, making her handsome young house guests pitch in by rolling meatballs, deveining shrimp, and massaging pieces of short rib.  And to her surprise, at the end of the meal, the dear young things began to pack away their things, presented her with a beautiful poinsettia plant, and finally left her house.  Confused as to what had happened, Brandy once again called Bunny.  "Oh, I know why they left!" Bunny exclaimed, "I told them you would give them a cooking lesson!  They must have been waiting all this time for you to show them some recipes!"  "Bunny, do me a favor," Brandy sighed, "The next time you send someone to my doorstep, at least make sure they've got a couple of bottles of sherry with them.  That way I won't care how long they stay."

*The writers of this blog have been compensated by Everywhere Society for the information contained in this post, but the opinions stated were not influenced.
Posted by Bunny and Brandy at 10:20 AM