From the Kitchens of Bunny and Brandy: Pyure Organic Stevia Cookies and Crock Pot Delights

Seasons greetings all of our festive friends!  What with all of the silliness of the holidays, Brandy has decided to take it easy on the eating out for a little bit and stay inside, warming her house with the smells of the season and warming her body with the spirits of Christmas past, present, and future (namely gin, whiskey, and vermouth respectively).  Luckily, Brandy had a fair few things lying around the house that she very much wanted to experiment with, so please enjoy the fruits of her tinkering below!  Please do let us know if you try any of Brandy's concoctions for yourselves by tweeting us at @BunnyandBrandy or posting pictures to our Facebook wall!

Brandy has been a big fan of the Crock Pot for a very long time now.  "I love chucking in some meat and veg in the morning, running errands, attending meetings, spending hours picking out just the right embroidery thread for my next throw pillow, and then returning to a home smelling of deliciousness.  Its like having an invisible butler setting dinner on the stove for me."  This is probably why she was so glad to see that Crock Pot now has an official line of Seasoning Packets, making classic slow cooker meals even easier to throw together.  Brandy was able to try out four of the six flavors: Beef Stroganoff, Savory Pot Roast, Savory Herb Chicken, and Original Chilli.  Each packet helpfully comes with a basic recipe on the back, though as Brandy's never been known to follow a recipe exactly, she did find ways of putting her own spin on things 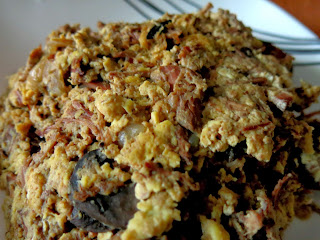 Brandy didn't deviate too much from this classic dish, only adding fresh mushrooms instead of canned, which creates more of a broth for the spices to melt into and the meat to cook in.  Straining out the broth at the end of the cooking process, Brandy boiled it down in a saucepan with just a little cornstarch to really thicken it and intensify the flavor before mixing in the sour cream and pouring it back over the meat, mushrooms, onions, and egg noodles.  Brandy also loved mixing the leftovers with some scrambled egg the next morning for a creamy and hearty breakfast! 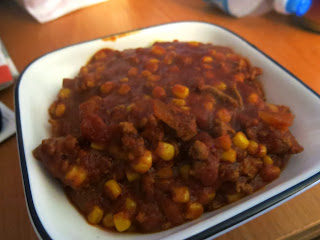 Though never a big fan of beans, Brandy really does enjoy the idea behind chilli, especially on a cold Chicago evening.  She used ground turkey for her meat to make the chilli extra lean and substituted the kidney beans the recipe originally called for for some frozen corn.  This gave the chilli the same kind of variation in texture one would expect without sacrificing any structure.  The Chilli spice packet added just the perfect amount of zing to the dish for Brandy, as her delicate palate can't handle too much heat all at once. 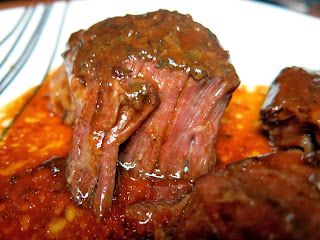 This was possibly the easiest of the four dishes to prepare, as all that Brandy did was combine the spice packet with half a bottle of cola flavored soda, which not only helped to tenderize the roast, but also made for a savory and sweet, almost barbecue style sauce.  Though the roast was delicious right out of the pot, Brandy also loved putting the tender meat onto rolls the next day and using the sauce for dipping. 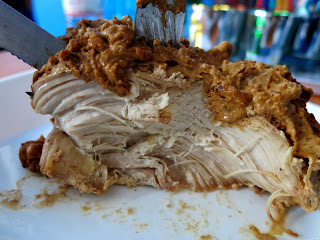 Never one to be held to conventions, Brandy actually used this one to flavor a gigantic turkey breast, mixing the spice packet with a container of garden vegetable cream cheese and slathering the poultry with it.  This method produced not only a succulently juicy turkey, but also a flavorful, creamy gravy that also worked well on a side of mashed potatoes! 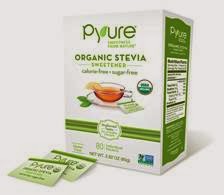 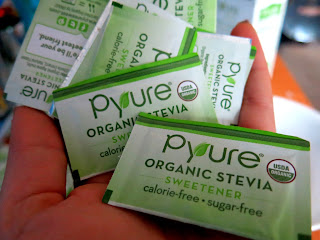 For dessert, Brandy decided to try something a little different.  As a great lover of Christmas cookies, Brandy knew she wanted to bake up a fresh batch of something special, but she also wanted to make sure everyone she offered them to could enjoy them.  "There's just so much to take into consideration these days," she grumbled, "Everyone's allergic to everything.  No nuts, no gluten, no sugar, no eggs.  Next thing you know they're going to be telling you to cook without water!"  Without compromising her principals too much, Brandy decided to make an all organic, festive cookie, but challenged herself to make it without refined sugar.  Hearing good things about Pyure Organic Stevia (which is only produced using the highest quality stevia, making sure to carefully extract only the sweetest part of the stevia plant so as to avoid any impurities in the flavor) Brandy chose this as her sweetener. 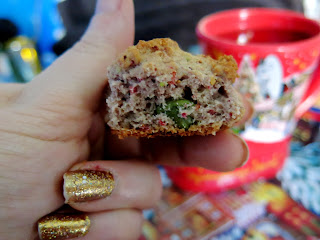 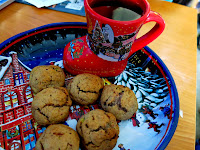 Following a basic sugar cookie recipe (2 sticks of butter, 2 eggs, 2 1/2 cups of flour, 1 tablespoon of baking powder, 1 tablespoon of baking soda, and a pinch of salt) Brandy substituted the usual 2 cups of sugar for 1/3 a cup of Pyure Organic Stevia, then added in chopped green pistachios and pulverized freeze dried strawberries.  The texture of the cookies was a little more on the dry side, which made them perfect for dunking into tea (which Brandy also sweetened with some of the Pyure) and the addition of the nuts and berries to the cookies provided a beautiful red and green flecked interior, making them a delightful little seasonal snack.
Posted by Bunny and Brandy at 10:11 AM