From the Kitchens of Bunny and Brandy: New Year's Bacon Brunch 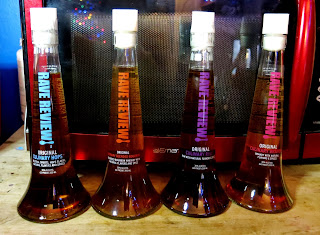 Welcome back, lovely brunching fans!  As Brandy is still in an eggnog induced coma and Bunny has been up in the air more than Santa Claus, today we bring you a collection of delectable recipes from our friends at Rave Review!™ Original Culinary Spirits™.  Culinary Spirits are specially crafted for cooking at high temperatures, keeping their flavors better than traditional spirits while decreasing any astringent alcohol bite.  They currently come in four varieties: Brandy, Hops, Bourbon, and Rum, all ready to go in convenient 200 ML sized bottles.

Before passing out in her arm chair for three days straight, Brandy told us that she wanted to have a bacon themed brunch this year on New Year's Day, so we present you all with some delicious bacon themed recipes that we hope will start your 2014 off on a savory and sweet foot (or belly, as the case may be). 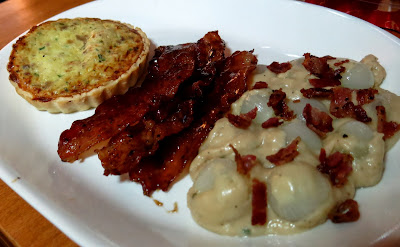 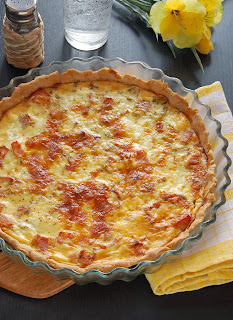 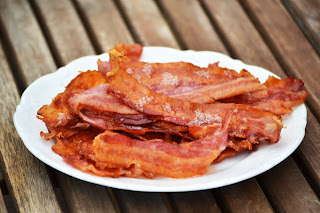 Part dessert, part side dish, this recipe brings together three of the greatest ingredients on earth!Toffee-coated slabs of boozy bacon! What could be better?


12 slices bacon2 tbsps. Rave Review! Original Culinary Bourbon2 tbsps. water½ cup maple syrup In a large sauté pan over med-low heat, render the bacon until it turns very crispy, about 15 minutes.  Remove the bacon from the pan with a slotted spoon and set aside, on a plate covered with paper towels.  Discard any remaining fat and deglaze the pan with the Rave Review!  Original Culinary Bourbon and 2 tbsps. of water.  Swirl in the maple syrup, and raise the heat to medium.  Bring the syrup to a hard simmer until it reaches 240 degrees, then return the bacon to the pan and coat with syrup.  Remove the pan from the heat, and lay bacon out on a non-stick cookie sheet.  Let cool to room temperature, then serve. **recipe courtesy of The Occasional Chef: www.occasionalchef.net 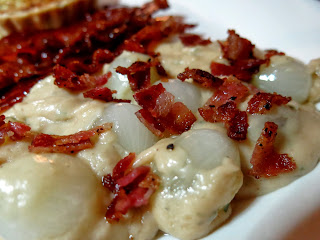 Peel the onions and cut off both ends.  Place them in a microwave safe dish with 2 tablespoons of water and cook on high for 2-3 minutes, just until a fork starts to go through them easily.

Crisp up the bacon in a large frying pan, set aside to drain, then chop roughly.  Slowly add flour to rendered bacon fat and whisk over medium heat until smooth and thick, almost a paste like consistency.  Let the flour mixture brown a little in the pan until golden, then add chicken broth and Culinary Brandy.  Whisk until smooth and thick.  Add cream and continue to whisk.  Add chives, cayenne, salt, and black pepper and stir to incorporate.  Add onions and cook mixture for another 10 minutes or until onions are completely fork tender.  Top with more chives and chopped bacon.

Combine all ingredients in a glass and garnish with a piece of crispy bacon, celery stalk, and green bean.  This is for all the bacon lovers out there!
Posted by Bunny and Brandy at 10:29 AM