Brunch or Whose on First? 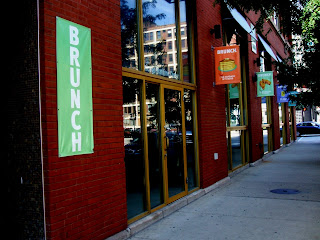 Brunch.  That's what its all about, really.  Well, that's what's this blog is about, at least.  Brunch.  That elusive meal with no real definition, only a vague rule that it has to happen after breakfast, but before lunch and combine the best of both.  One could make a case that its not even a meal, but a time period; a time for taking time, for sipping, nibbling, conversing, giggling, or planning the week ahead.  Brunch is the last gasp of fresh air before the weekend settles back into the work week.  Brandy's fondness for brunch has always been founded on these principals.  "That, and its the only meal that makes drinking in the morning acceptable," as she likes to say. 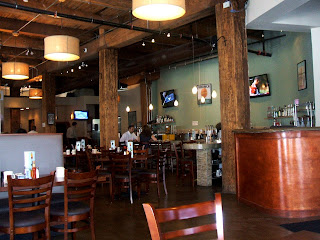 So how could Brandy very well ignore a restaurant so brazen as to call itself Brunch?  Well, the truth is, Brandy wasn't exactly ignoring it so much as didn't know it existed.  "Have you been to Brunch?" people would ask her.  "Of course I've been to brunch!  It's Sunday, isn't it?" Brandy would respond, incredulously.  "But have you been to brunch in River North?" they would invariably ask. "Not today, but I have done in the past.  Today it was brunch in Logan Square."  "There's a Brunch in Logan Square?" "There's lots of brunches in Logan Square." It would be at this point in the conversation that Brandy's partner would become very confused. 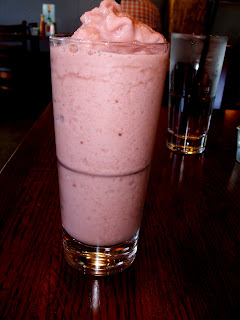 But one fateful day while wandering around the River North area, Brandy came across a large building strewn with banners proclaiming, "Brunch!"  Of course, she was intrigued and poked her head in.  Inside was a large, open space with a long counter on one end, and high wood beam ceilings. The overall effect was one of a quirky diner mixed with a comfortable lodge.
Quickly taken to a seat and present with a menu, Brandy started off with a Peach Melba Smoothie. Though the smoothie was thick and luscious like a milk shake, Brandy found it very hard to drink, as it hadn't been blended properly, leaving huge chunks of ice through out. She found herself sucking so hard on the straw with such few results that she ended up setting the delicious thing aside until it could melt down a bit. 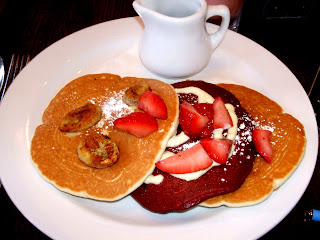 Brandy decided to start off with the Pancake Trio, a sampler plate of three different flavors. Or, at least they were supposed to be different flavors. Though the menu listed the plate as offering buttermilk, banana, and red velvet pancakes, Brandy soon deduced that the banana pancake was no different than the buttermilk, other than that it had been topped with a few slices of caramelized banana. "Seems to me they could have mixed the banana into the batter at the very least!" she huffed. Though quite ordinary, the pancakes were rather tasty with a nice fluffy interior. She very much enjoyed the red velvet variety, which had the slightest little hint of chocolate. "Seems red velvet is all the rage these days, but not a lot of places do the flavor justice," she said to no one in particular, "This very much honors that flavor, which is so hard to pin down. Very commendable." 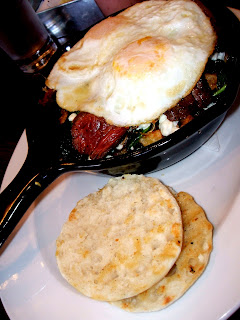 As her main dish, Brandy selected the Steak Skillet, a mish mash of veggies, meat, potatoes, eggs, and cheese.  This hearty sounding dish was love at first bite.  On top, the eggs (which Brandy had ordered over medium) were ever so slightly over cooked, but not enough to bother her, as the yolks still ran for the most part.  The next layer was the steak, which was juicy, tender, and plentiful.  Below that, the goat cheese, which added the most wonderful creaminess to everything.  Then came the mushrooms and spinach, which were fresh, perfectly seasoned, and not at all watery.  Lastly was a layer of cubed potatoes, which even though they had been hiding underneath all the other goodies, had somehow still maintained a crispy texture on the outside and a wonderfully smooth interior.  All combined together, Brandy could not get enough of the dish, scooping up different combinations of ingredients to make every bite a new experience in flavor.


And so at last, Brandy can finally say she has been to Brunch, and with her bill coming out under $30 for such a bountiful feast, she can say that she will probably brunch at Brunch again.  "But next time, I expect a little more effort in the pancake department," she was heard to remark. 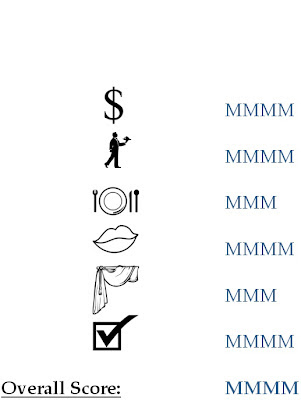 Posted by Bunny and Brandy at 9:27 AM