Long long ago in the spring of 2007, I was new to Chicago and was still trying to find my footing. I'd moved here the previous fall with two friends from college and we had all just barely made it out of our first arctic winter. I had a crappy job (which I would be fired from within the month for accidentally exposing a shady real estate investor's sketchy policies), a cheap, but comfortable apartment, and a very small group of friends. My roommates were both from Pennsylvania and were getting really home sick, especially as Easter approached. One decided to go home for the holiday, while the other couldn't afford the trip. "Don't worry," I told her. "I saw a sign on the restaurant down the block about an Easter brunch. You and I are going to go to that and have the best time ever." That restaurant was Kit Kat Lounge and Supper Club, and I had no idea what I had just signed us up for.

We walked in Easter morning with no reservation and were lucky to be seated. In those days, Kit Kat wasn't doing a brunch service every week, and this might have only been the first or second time they had done a special service on Easter. They had a prix fix menu that included unlimited mimosas and three courses (biscuits, an entree, and a dessert) at a pretty damn good price. Best of all, they featured numbers by the exquisite Madam X, a showgirl drag queen of the highest order who made all her own costumes and sang all her songs live. Keep in mind, this was before RuPaul's Drag Race transformed the drag scene forever and brought it's history, artistry, and lingo into popular culture, so having brunch at a drag club on a religious holiday seemed very rebellious to us at the time. My poor home sick room mate was infatuated with Madam X, even asking if we could take a picture with her to commemorate our first Easter in Chicago. 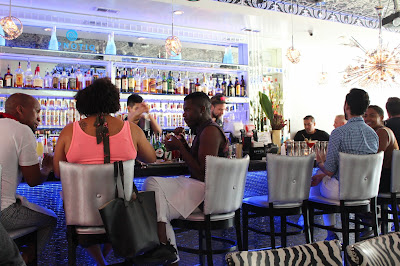 For the next ten years, Kit Kat was my go to neighborhood spot. I knew the nightly specials by heart. I knew the martini menu by heart. I knew the performance schedule by heart. I took friends there. I took dates there. I took my mother there. When this blog was launched in 2010, Kit Kat was the subject of one of our very first reviews. That was just at the point where they were beginning to expand their brunch service to include holidays like Halloween and Mother's Day, so things were a little shaky, but I never minded. Mostly because I was usually pretty wasted.

Now, Kit Kat's Sunday brunch is a mainstay of the neighborhood. Every Sunday, you'll find huge groups of girlfriends, boyfriends, families, bridal showers, birthdays, and everything in between flocking to Kit Kat for their perfect mix of entertainment, great food, and amazing cocktails. When I moved out of Lakeview last year, I knew that heading to Kit Kat anytime I wanted was going to be one of the things I would miss most.

That is why I decided to make my triumphant return to Kit Kat this past Sunday. They've recently expanded their menu quite a bit, so I was interested to see what they had in store, as well as revisit some of my old favorites. And of course, I wanted to see what new numbers Madam X had added to her repertoire. 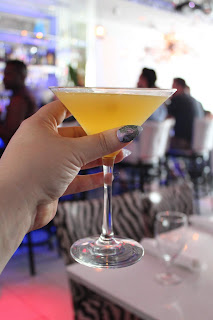 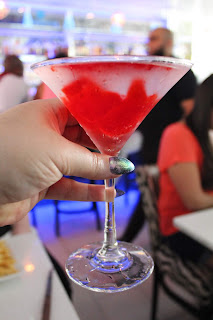 Where as in the past, Kit Kat Lounge had only offered unlimited mimosas with their brunch, they've now expanded the choices to include Bloody Mary martinis, white and red sangria, pink champagne, and vodka spritzers. I'm pretty partial to the sangria myself, but I also had to get one of my old favorites off the martini menu, the Lava Lamp (which is basically a lot of vodka and a Jello shot). I was near to distraught not to see my all time fav cocktail, the Black and White, was no longer listed on the menu. I beg you, Kit Kat. BRING THAT ONE BACK.

My friend and I started off with the Crab Cake Benedict, which has been on their brunch menu since the very beginning. It was still satisfyingly crabby, with a softer texture then a typical New England style crab cake, but they had added a bit of bacon to the top, which gave it a welcome meatiness and a little crunchy contrast. 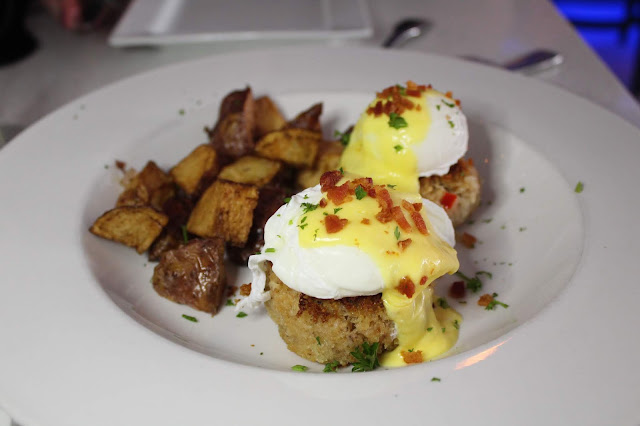 Next up, a stand by and a new addition to the menu: The Kit Kat Burger and the Korean BBQ Chicken Sandwich, both of which came served with a literal mountain of truffle fries (their fries are outstanding, by the way). Once again, the burger was just how I remembered it: cooked perfectly medium, topped with a thick slab of bacon, a perfectly fried egg, and melted Gruyere cheese. It's nearly impossible to go wrong with this burger. The chicken sandwich was a nice new addition to the line up, with a sweet and tangy flavor that matched nicely with the crunchy slaw and the juicy chicken. It was a little difficult to pick up and eat (especially while trying to hold out a $5 bill to Madam X in my other hand), so eventually, I had to resort to a fork and knife. Still, hoping this one sticks around for a while. 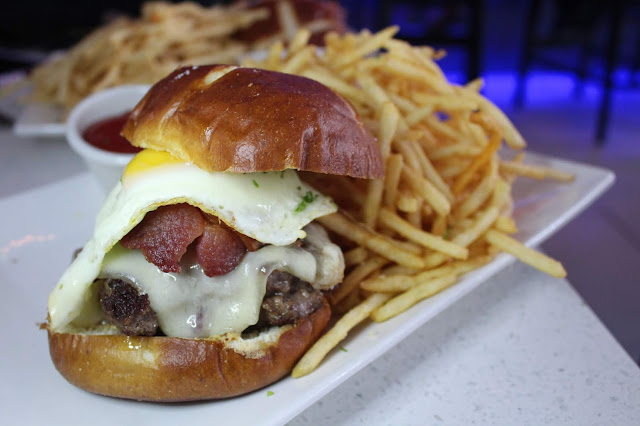 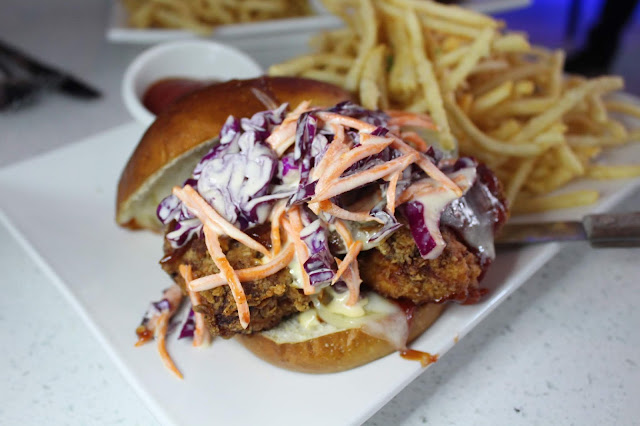 Lastly, we finished off with my personal favorite sweet treat on the menu, the Rice Krispie French Toast. For this dish, they coat their French toast in a layer of puffed rice cereal, then serve it with a tres leches syrup and marinated strawberries. It's not overly complicated, but it's still such a fun take on a classic brunch dish. 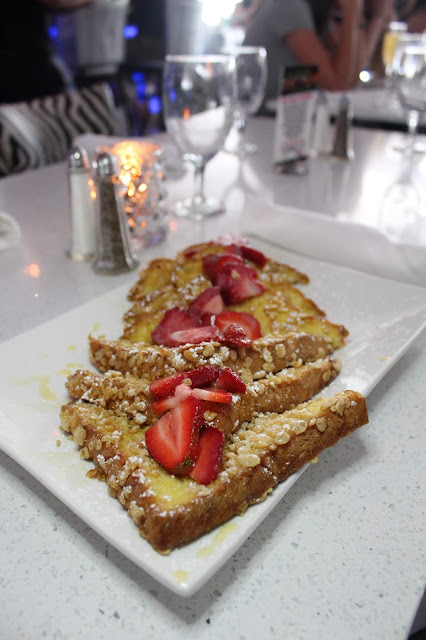 As always, Madam X was perfection. She delighted the crowd with several pop diva medleys (Beyonce, Miley, Katy Perry, etc.), which included her signature vocal talents as well as dramatic costume changes. Some Sundays will see her doing an entire show of themed numbers, like ABBA for Mother's Day (Mama Mia... get it?), Rocky Horror on Halloween, or just an entire morning of Lady Gaga to celebrate Mother Monster's birthday and such. Regardless of her set list, she is never a disappointment. 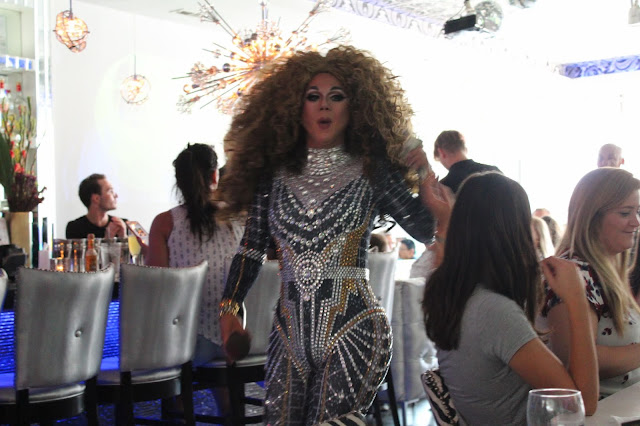 People are often surprised when I recommend the food at Kit Kat, but I cannot remember a time when I got a dish I didn't like. The prices are always more than reasonable (seriously, most bars would be charging upwards of $20 for comparable cocktails, whereas Kit Kat charges $13 for most everything they serve, and has 4 nights per week where all martinis are half price!). Can they get a little crowded? Yes. Is the service a little slow and spotty sometimes? It can be. But in my over a decade acquaintanceship with this restaurant, always come away utterly delighted with my experience there. Also, Madam X? My mom said to tell you hello!

I was invited to dine free of charge by the restaurant, but all opinions are my own.
Posted by Bunny and Brandy at 12:21 PM