Bake or Brandy in Wonderland 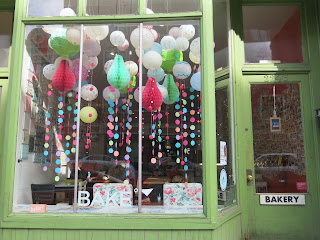 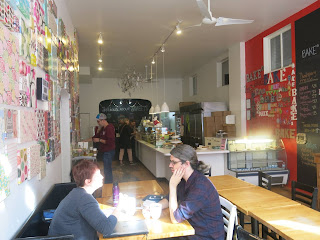 Once, long ago, Brandy dreamed of having her own bakery. She could picture it so clearly; she, standing behind the counter, smiling wistfully at the delighted children as they pointed at the brightly decorated cookies or the stoic adults who quietly tried to contain their excitement about buying themselves a slice of cake. In her fantasy, she'd start every day covered in flour and end every day smelling of coffee and butter. Sadly, once she finally began to learn the baker's trade, she found that she didn't have much patience for it. "I went a little crazy rolling out dough every morning. It just got everywhere! Under my finger nails, in my hair, on my face. And I could never get the macarons to bake with proper feet. My buttercreams always separated. And to this day whenever I see a piping bag, I get a slight shiver down my spine. I was just simply terrible at baking in a professional kitchen. It was then that I decided I would much rather be a spectator in the world of food rather than an athlete." Never the less, Brandy has always carried a soft spot for bakeries, and she often will wile away her mornings at such places, snacking on a variety of sweet and savory pastries while sipping on a smooth and frothy cup of coffee.

Always on the lookout, Brandy recently stumbled upon BAKE in Wicker Park. Their colorful decor was the first thing that attracted her attention; from the vibrant paper lanterns in the window to the creative art displays inside the shop (like a wall covered in tiny paper wrapped canvases and another spot where the word "BAKE" had been replicated in a variety of colors and fonts, to the chandelier in the middle of the ceiling that seemed to be made from a large tree branch painted silver and hung with crystals). 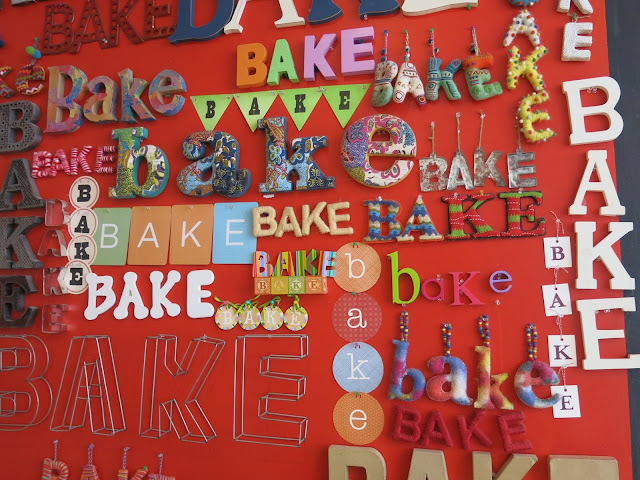 Stepping up to the counter, Brandy instantly became overwhelmed by the sight of all the beautiful baked goods, so she asked the lady behind it for some recommendations on the bakery's best offerings. With hands full of delectable treats, Brandy settled herself into a table by the window and started in. 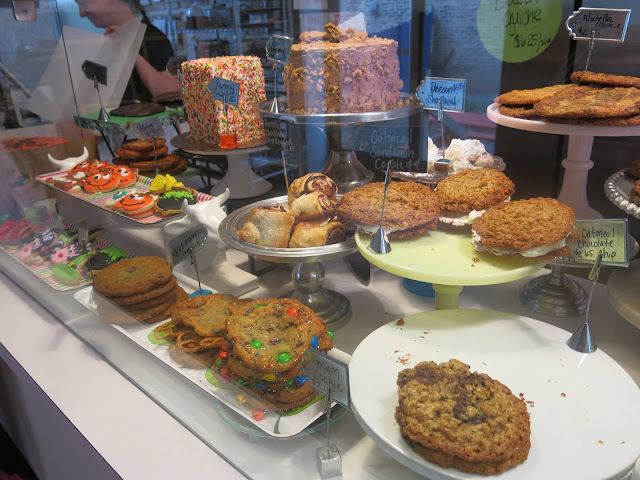 Her drink of choice was a simple mocha, but it had been prepared very skillfully, which gave it an thick, foamy top. Though the chocolate was present, Brandy mostly tasted coffee in the drink, which she very much appreciated. It also had a very subtle sweetness, making it the perfect accompaniment to the variety of sugary delights before her. 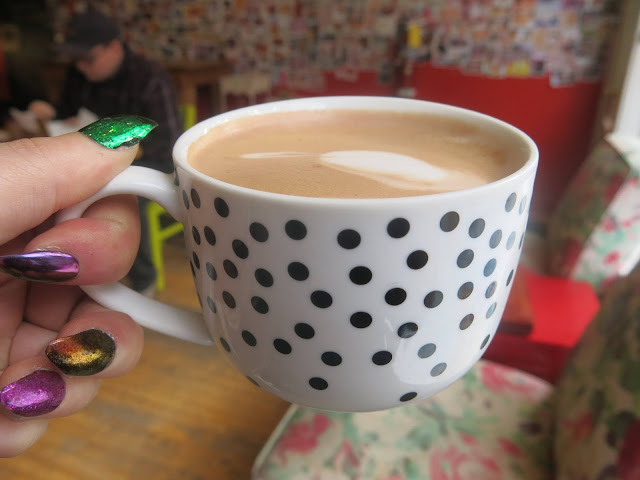 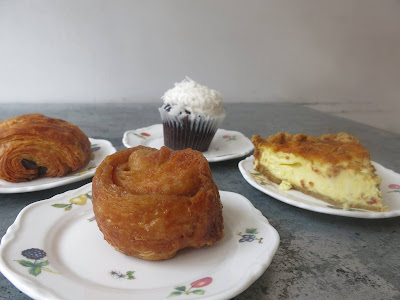 Brandy started out with the Morning Bun, which the lovely girl behind the counter had pointed out as one of the bakery's top sellers. The bun had several layers of crispy dough on the outside and a wonderful chewy interior. It seemed to have been flavored with honey and just a touch of cinnamon, which put it somewhere in the family of a croissant and a cinnamon roll. "Oh, this kind of thing can be very dangerous," she said to herself.

Next, she moved on to her savory selection for the day, a slice of Bacon Quiche. The texture was incredibly silky and smooth with a prominent eggy flavor that some other quiches don't always get right. It did seem to be a little on the greasy side, though whether that was because of the bacon or from the copious amount of butter in the crust, she wasn't quite sure. Regardless, the bacon did add an excellent smokey flavor that permeated the quiche, but didn't overwhelm it.

Finally, she ended with a dessert, a Chocolate Cream Cheese Cupcake. The cake was very spongy and moist with a lovely dark chocolate flavor that wasn't too sweet. The frosting was an absolute dream of fluffy cream cheese and butter sprinkled in shredded coconut. "Simple, but delightful," Brandy concluded, "Just how everything in life should be."

Quite happy with what she had experienced so far, Brandy grabbed a second round of treats to take back home with her. Among her favorites were the house made chocolate croissants with lots of flaky layers, the chocolate chip scone, which was so enormous that she had to eat it across two different mornings, and the pear and cranberry pie, which resembled more of a crumble, but had a lovely sweet and tart flavor with just a hint of baking spices. But her favorite take away from BAKE was the Oatmeal Sandwich Cookie, which was positively bursting with buttercream filling. The texture of it was crisp, yet soft, and the flavor was pure brown sugar, yet it was never cloying. "Toss those chocolate sandwich cookies in the trash and give me a box full of these!" she loudly declared after taking a bite of the amazing cookie. 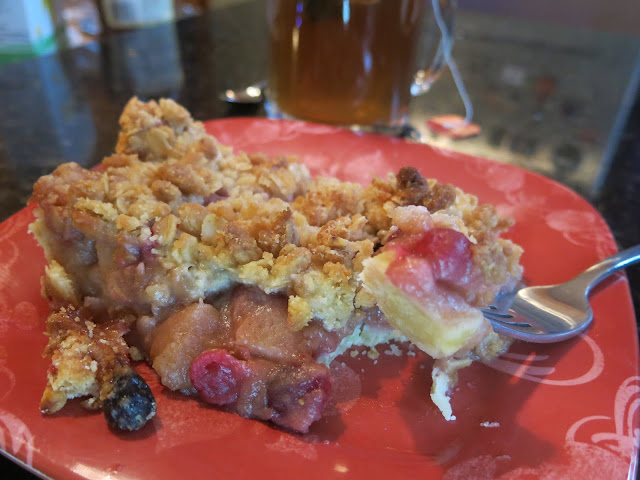 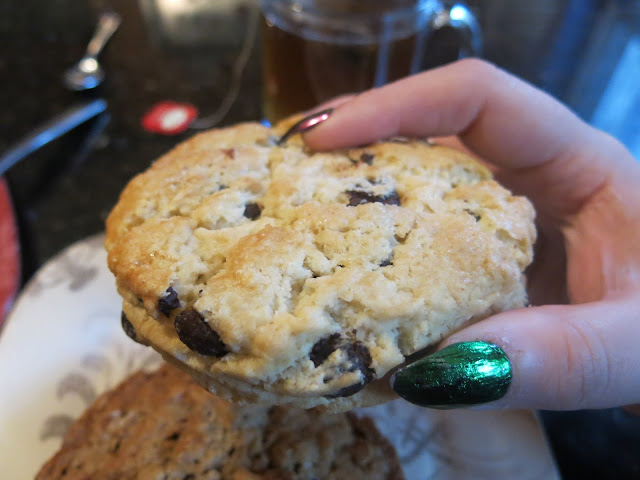 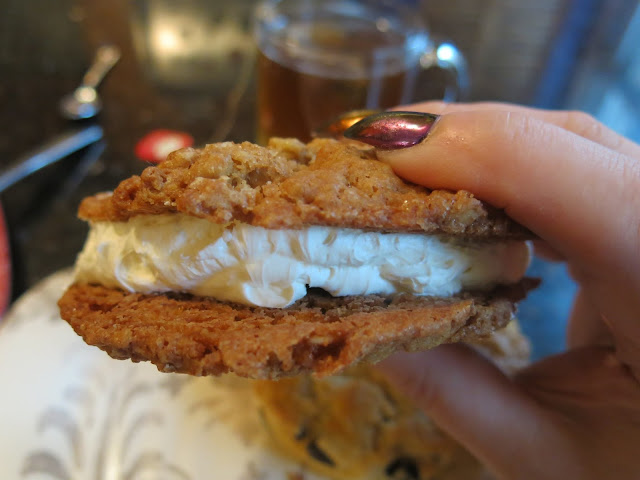 All in all, BAKE had many of the things Brandy likes to see in a bakery; a whimsical atmosphere, a handful of savory options, great control when it comes to sweeter foods, wonderful coffee drinks, and a real sense of joy behind it all. "If I had ever opened my own bakery, it most certainly would have looked a lot like that place," she commented to no one in particular, "But I think at this point in my life I'd much rather get up early to eat those morning buns rather than getting up early to make them!" 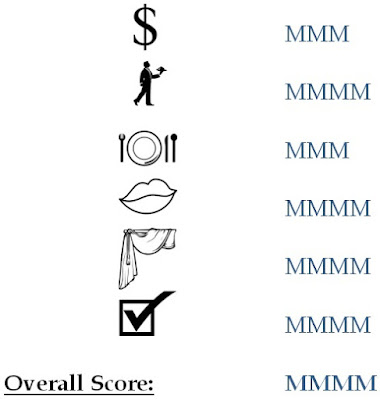