Maggiano's or A Brunch Among the Clouds 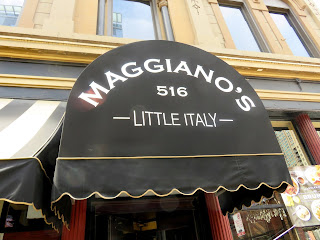 It's not unusual for Brandy to start craving Italian food as the weather warms up. The summers of her wild youth were always spent cruising the Italian coast; sipping Chianti by the light of the setting sun or eating tomatoes out of hand like a fruit or slurping up the freshest pasta in existence. "I will forever associate the bliss of sunshine and blue skies with Italy," says Brandy. "Every year, it seems, as soon as the weather starts to turn, I immediately start craving olive oil, garlic, and basil." 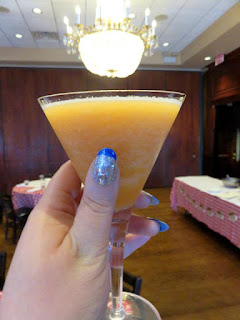 One bright and sunny morning, Brandy was lucky enough to be able to indulge her cravings by stopping into Maggiano's Little Italy to preview their recently premiered brunch menu. Maggiano's massive space at the corner of Clark and Grand made it ideal for every sort of occasion, from a small meal with friends, to a large familial celebration, to a massive event, like a wedding reception or a corporate outing. Chef Josh Rodriguez was at the helm of this particular location, and he spoke quite enthusiastically to the attendees that morning's event about just how fresh everything that came out of their kitchen was. What surprised Brandy the most was that Magginao's was serving brunch items all throughout the week, with the addition of a few extra options on the weekends.

The morning began, as every morning should, with a selection of cocktails. Brandy favored the peach Bellini, which had a semi-frozen texture that she found rather refreshing. While fairly sweet, the drink went quite nicely with all of the food presented.

The first tidbit to the table was an Orange Streusel Cake, which the chef explained was presented complimentary to every bruncher. The cake was moist and a bit dense, but coated with a lovely orange-scented glaze and a bit of spice, reminding Brandy of mulled wine or cider. The best part was the delightful little bursts of flavor from the hidden raisins inside. 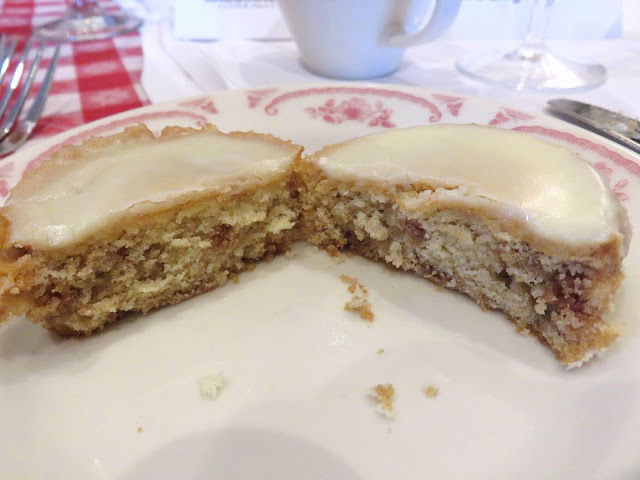 Next came two of the house signature Benedicts; a Crab Cake Benedict and the unique Meatball Benedict. Though Brandy has seen crab cake benedicts countless times, this one in particular seemed rather meaty and substantial, though a little on the fishy side. The meatball one, though, was certainly a new and exciting development in the realm of eggs benedicts. The meatball had been smashed a little so as to be able to house the poached egg on top, and reminded Brandy somewhat of a breakfast sausage patty. The creamy hollandaise actually worked quite well with the meatball, and the addition of some roma tomatoes helped to brighten up each bite a little. Brandy thought the real triumph was in the spice of the meatball, which was perfectly balanced between savory, salty, and herbaceous. 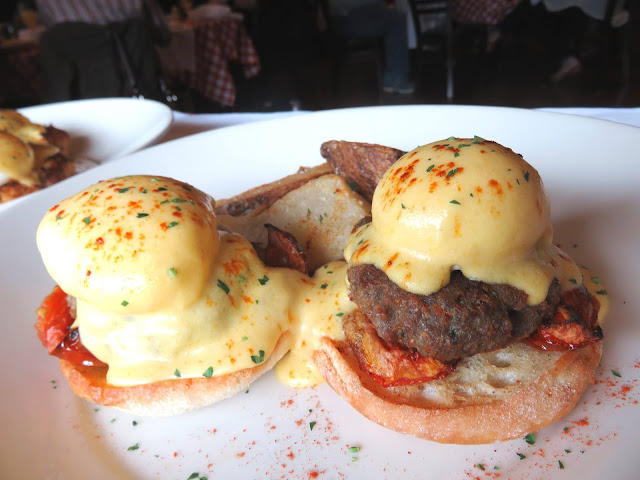 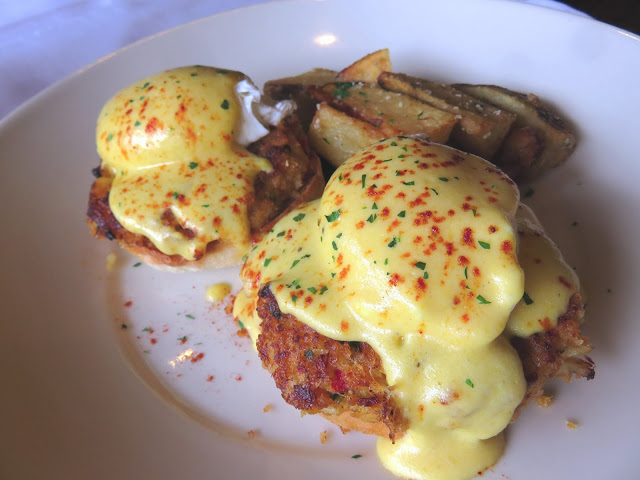 After that, Brandy sampled some of the sweeter options from the brunch menu. The Creme Brulee French Toast had a very nice eggy flavor, having literally been dipped into a creme brulee custard base, and was soft and sweet, even without the addition of syrup. The Lemon Ricotta Pancakes were definitely the hit of the morning, though. "I can't believe how light and fluffy these are!" Brandy exclaimed. She likened the texture of the pancakes to a souffle, while the lemon provided a bright note to match the fresh blueberries served on top. Chef Rodriguez even demonstrated how to prepare the pancakes, revealing the secret to their amazing texture was the careful whipping of egg whites into the batter and an extended cooking time on the griddle. 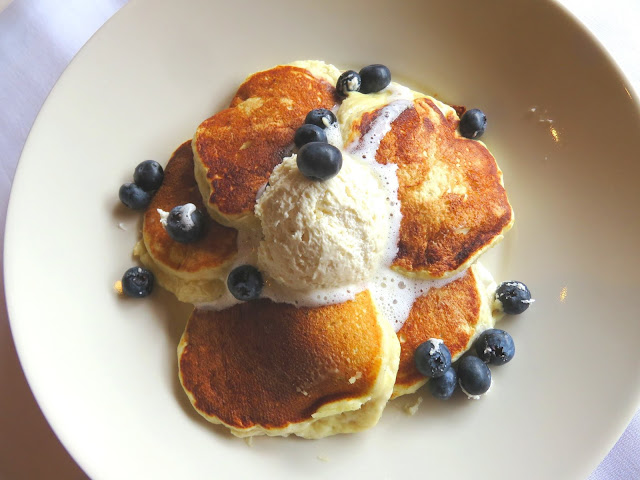 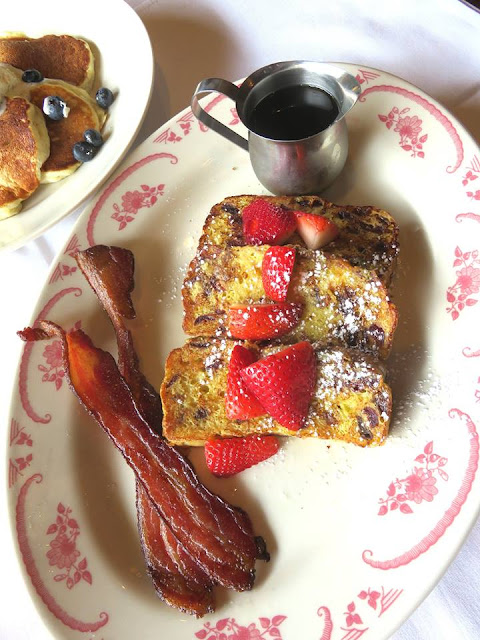 Lastly, Brandy sampled some of the Vegetable Frittata, which was jam packed with spinach, tomato, mushrooms, and plenty of melty cheese. The egg was fairly dense, but didn't overwhelm the vegetables, and the dish overall was a nice alternative to a regular old omelette. Brandy especially liked the side of crisped potatoes, which had been sprinkled with a course salt for extra flavor and texture. 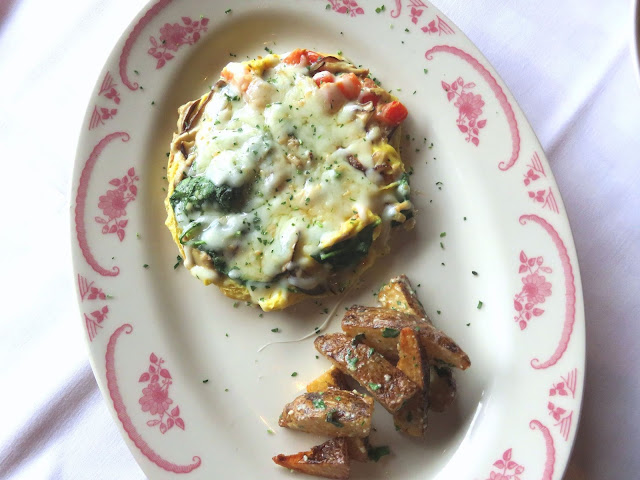 Her cravings for Italian food finally satiated, Brandy finished off the last of her peach bellini and headed for home, where she promptly prepared another batch of Chef Rodriguez's amazing pancakes, stuffed her face, and fell asleep in her arm chair with her knitting needles in hand.

The writers of this blog were invited to dine at the restaurant free of charge in exchange for an honest review.
Posted by Bunny and Brandy at 10:42 AM