Normally, Brandy avoids physical exercise at all costs, preferring activities that require as much sitting as possible. But when said physical activity involves brunch, she's more than willing to lace up her special comfy sneakers (with their accompanying custom molded cushion inserts), put her hair into an immaculate bun, and prepare to perspire. Such was the case last weekend when Brandy attended the Brunch Bites Walking Food and Drink Event in River North, in which she and several hundred ticket holders were able to make their way to eight different participating restaurants for mini versions of signature brunch dishes and cocktails. "Well, I suppose it is a rather nice day," Brandy reasoned, "so might as well get out and get some sun. And some bacon. And a cocktail or two... or eight."

After receiving her lanyard and official map at the check in, Brandy was on her way. Her first stop was to GT Fish & Oyster, where they were serving one of her favorite little bites, an Oyster 'Po Boy Slider with kimichi and peanuts, along with a mimosa with fresh apricot puree. The crispy little sliders were just as delightful as Brandy remembered, and the fresh burst of fruity flavor in the champagne shot was the perfect start to an exhilarating morning. 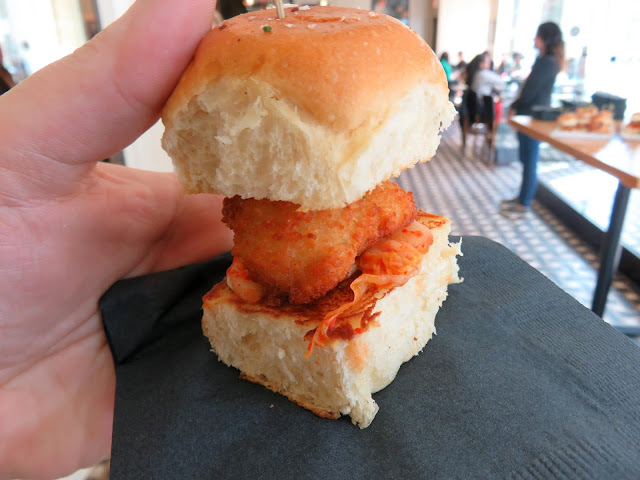 Across the street and down a little ways, Brandy entered Bottled Blonde, where they were serving up a delectable Prime Rib Benedict with a spicy hollandaise, green onions, and potatoes, accompanied by a small glass of White Sangria. Brandy devoured the dish quite quickly, savoring the tender meat, the crispy potato cake, and the little kick of the sauce. The sangria was a pleasant surprise, packing quite a potent punch into a few sips. 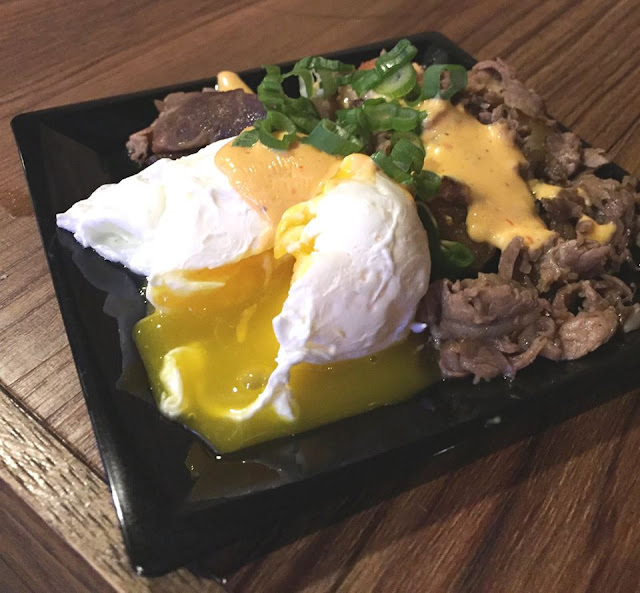 Brandy then headed to the farthest western point, Hutch Cafe, where they were offering up one of her recently discovered favorites; Nutella Poppers. The dough was just as light and chewy and the middle just as decadently chocolaty as when she'd first sampled these little pockets of heaven a few months ago. The cocktail was called a Spicy Sunset and added a touch of jalapeno to a traditional mix of orange juice, tequila, and strawberry puree. 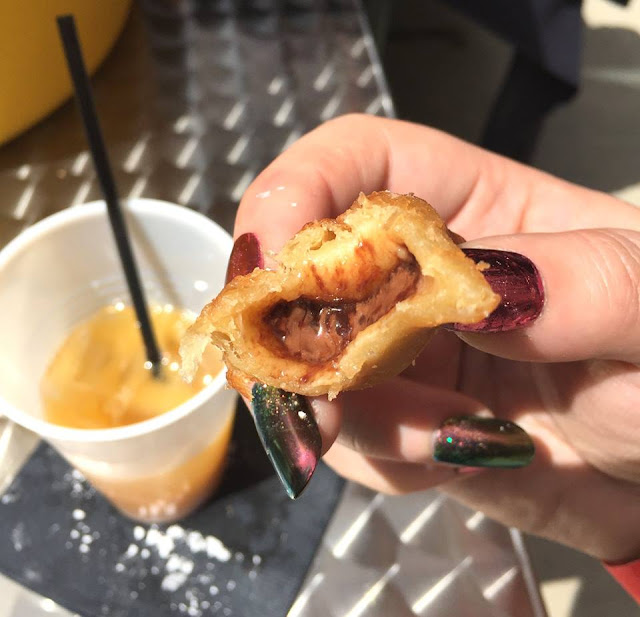 Backtracking towards the center of the circle, Brandy stopped into Brunch for one of their Banana Bread French Toast bites, which came drizzled with a rum based Bananas Foster sauce, and a tiny yet adorable carafe of mango and ginger sangria. 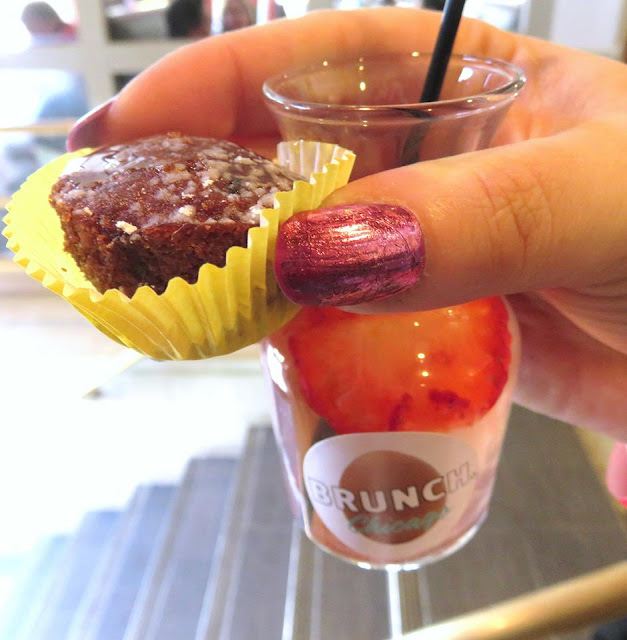 Moving North, Brandy's next location was Dolce Italian in the Godfrey Hotel. Here, she was handed a small plate of an amazing gnocchi, which had been dressed with plenty of cheese and crispy panchetta. This plate was one of Brandy's favorites of the day, and she almost contemplated trying to sneak a second one. The cocktail was a traditional, but refreshing, peach bellini. 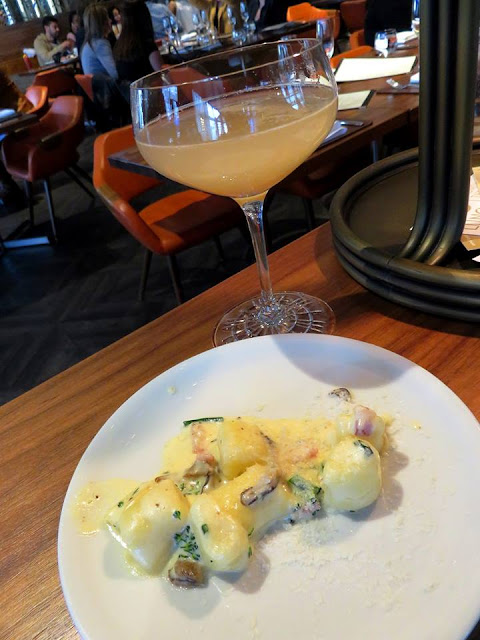 Next up was Zed451, which Brandy still holds in very high regard as one of the best brunch buffets in town. Here, they had not one, but two cocktails for brunchers to choose from; a mimosa, or a coffee based cocktail called Drink Your Breakfast, which was what Brandy gravitated towards. The rich and creamy flavor was the perfect break from the mostly fruit based drinks of the other locations, and the coffee gave Brandy a much needed boost to get through the final lap of her journey. The bite was a mini Chicken and Waffle, spiced up by a bit of buffalo sauce. 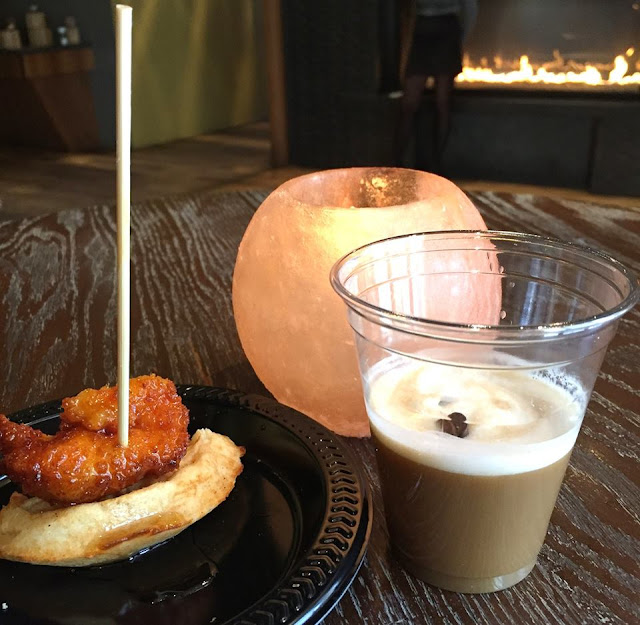 Finally, Brandy traveled south to Hub51. They were presenting a pretty little avocado toast with a touch of mascarpone and radish, along side a Salty Dog, with vodka, grapefruit juice, and rim of black sea salt. The avocado toast was surprisingly light, which made it ideal among some of the more protein themed bites of the day, while the cocktail was made extraordinarily flavorful by the black salt. 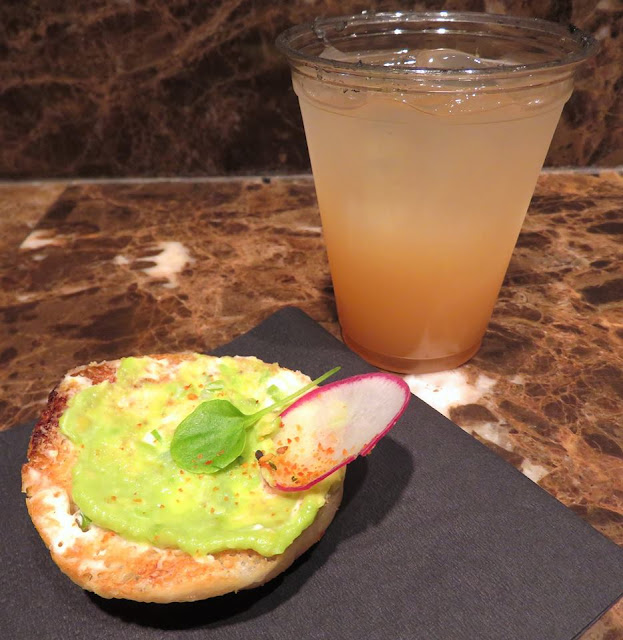 Brandy's last stop was River Roast, where she relaxed in the upper bar with a glass of a special punch (made with rye, rum, sherry, champagne, lemon, and best of all, Earl Grey tea) and a beautiful little deviled egg, which had been topped with trout roe for a burst of salty goodness. As she gazed out on the river outside, Brandy smiled to herself. As if getting to try all of the dishes and cocktails hadn't been reward enough, she had also been bestowed with the gift of being able to truly enjoy Chicago on one of the very few beautiful days of the year. 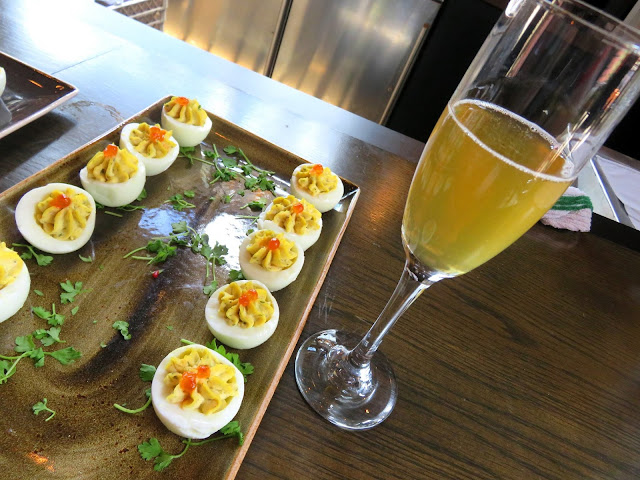 The writers of this blog were invited to attend this event for free by the organizers in order to facilitate the writing of this post.
Posted by Bunny and Brandy at 12:03 PM