Hearth or Home is Where the Hearth Is 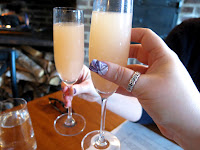 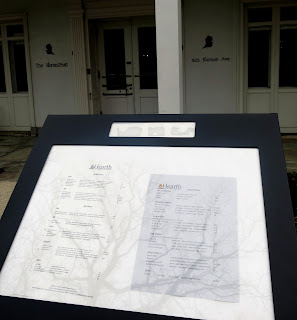 A few weeks ago, Bunny, while in town, had a simply spectacular meal at a little spot called Hearth in Evanston, and she has not stopped raving about it since.  "It was just so well thought out, so surprising, and so so delicious!" she'd told Brandy on more than one occasion.  Brandy, somewhat annoyed that her friend had such an amazing meal without her, has simply taken note without much input, until recently when Bunny asked her why she had yet to go there for brunch.  "What do you mean?" Brandy had asked her.  "Well, they launched their brunch service shortly after I was there for dinner.  Did I not tell you about this?"  "That must have been what you were trying to say that night you called me.  The only words I could make out were, 'Evanston,' and 'Ravioli.'"  "Oh yes!  Well, I did have a few cocktails that evening!" Bunny giggled. 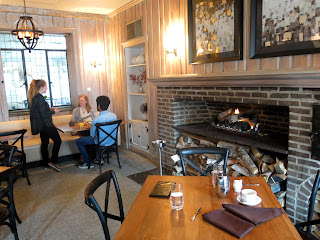 Not willing to wait any longer to visit this hidden gem now that she knew brunch was a possibility, Brandy gathered up her friend Bailey and headed North from the city one Sunday morning.  Hearth was easy to pass by, being in a rather unconventional space, but once inside, it felt warm and comfy.  Sunlight simply lit up the room, which centered around a large brick fireplace, giving everything the air of a cozy mountain lodge.  The ladies quickly ordered up a couple of Bellinis made with fresh peach nectar to sip while they reviewed the menu. 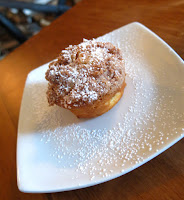 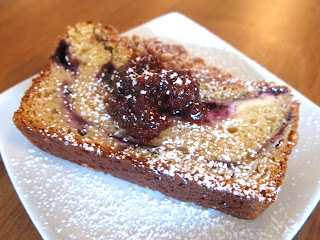 The morning's nosh began with a a trio of fresh baked pastries.  The muffin of the day was flavored with apple and lemon, giving it a nicely fruity touch.  It was served warm, which made it crumble enticingly in the fingers as it was eaten, the top of it having a nice light crunch and the inside being soft and moist.  The daily scone was next, having been spiked with chocolate, cranberries, and orange peel.  The texture of it was rather dense and the flavor was intensely orange with a lovely richness from the dark chocolate.  "I may need a cup of tea to finish this off," said Brandy, "Or maybe one of those Earl Grey cocktails Bunny mentioned."   Lastly was the coffee cake, which had been made with blueberries and cream cheese.  Brandy was absolutely swooning over this particular pastry for its fresh and decadent flavor and perfect velvety texture.  "Can I try a bit of it?" Bailey asked, but quickly withdrew her fork when she saw Brandy's expression. 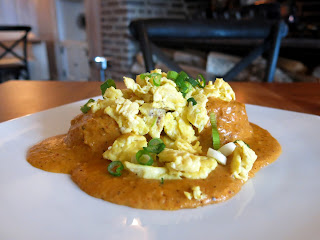 For Bailey's main course, she chose her old standby, the Biscuits and Gravy.  This version had been made with chorizo in the gravy and topped with scallions, meaning the usually drab looking brunch staple was actually quite pretty and colorful to behold.  The chorizo absolutely permeated the plate with flavor, making for what Bailey declared was possibly the best gravy she'd ever tasted.  "This is going to sound silly, but you know what it reminds me of?  Chili!" she laughed, "You have to remember, I'm from Ohio, so I know what good chili tastes like, and even the best chili doesn't compare to how flavorful this is."  The biscuits at the center of the dish were nothing to sneeze at either, having a dense but silky texture and a good bite of green onion and cheddar goodness. 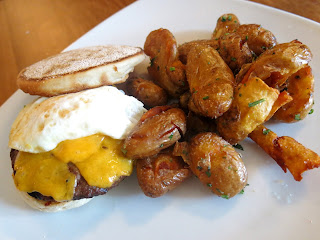 Brandy went with the AM Burger, which came with a side of home fried potatoes.  The potatoes were nicely cooked, but a tad over salted, though Brandy did like the uneven crispiness of the exterior skins.  The burger, on the other hand, was a true breakfast burger, being served on an English muffin with bacon jam, melty cheese, and an over easy egg.  "I've had plenty of so called breakfast burgers in my time," said Brandy, "And usually they are simply a lunch burger with an egg on top.  This, however, really feels like a dish more meant for consuming before noon."  The beef had a lovely char to it that was balance nicely by the pockets of sweet bacon jam and topped off by the richness of the over easy egg.

"Well, I do see why Bunny so adored this place," Brandy commented as she and Bailey sipped some coffee at the end of their meal, "Though I do wish some of those special touches she mentioned about the dinner had been carried over to the brunch service."  Never the less, the service was just as friendly and knowledgeable as Bunny had described and the prices were more than reasonable.  "I suppose Bunny knows what she's talking about after all," said Brandy, "Even after she's had a few cocktails." 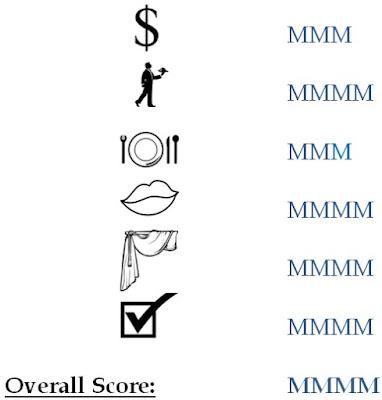