AMK or America the Brunch-i-ful 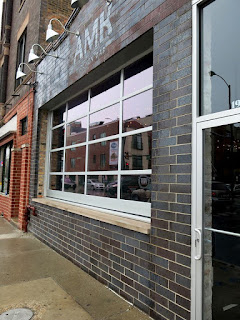 It was a little over a year ago that Brandy met an aspiring film maker by the name of Boxty Ban who was determined to make a movie about her brunching adventures.  Sadly, The Rise and Fall of Sweet and Savory never did find the funding it needed to get off the ground, but that hasn't deterred Boxty's ambitions one bit.  "I think what we need is a good angle, one that will send people flocking to the box office.  We could incorporate a tragic love story, for instance, or maybe super hero or a vampire!"  It was obvious to Brandy that Boxty had been corrupted by the Hollywood system.  "A film about brunch doesn't need all that," Brandy chided her, "It's just like when a brunch menu tries be too whimsical or twisty.  Put the focus on the classics, the fundamentals, and go from there, that's what I always say."  "I'm not sure what you mean."  "Well, let's go get some brunch and I'll show you." 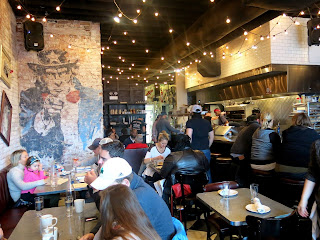 Brandy chose AMK Kitchen & Bar in Bucktown, thinking the hip sensibilities and American comfort food based menu would help to prove her point to Boxty.  The inside of AMK had that modern industrial kind of feel so common now a days, but here it was done nicely, with exposed brick walls decorated in custom graffiti art and twinkling strings of light throughout the cozy, but open space. 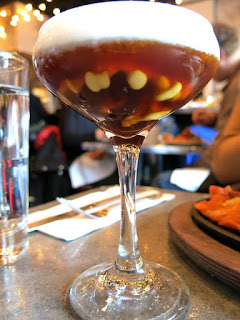 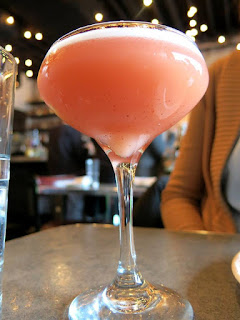 The cocktail menu immediately attracted Brandy's attention.  She first went for the Thorn Cherry with vermouth, lime, champagne, sage, and cherry liqueur, which Brandy found had a nice deep fruity and floral flavor without being too heavy.  Boxty's choice was the Garden Girl, which had such a pleasant sweet and creamy strawberry flavor that it could easily turn dangerous.  Brandy also sampled the Rhub Me Off, which had a bright tropical flavor that Brandy thought went extremely well with breakfasty foods, while Boxty switched to the Uncle Sam's Espresso with bourbon, cinnamon, vanilla, and of course coffee.  "And I thought Irish coffee was bad enough!" the native Irish Boxty exclaimed, "But this is a whole new experience!" 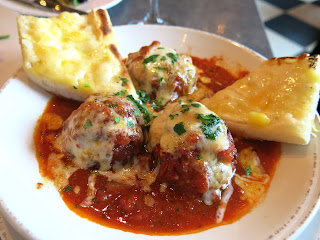 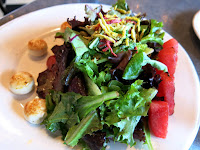 The meal started off with a pair of dishes at opposite ends of the spectrum: Turduken Meatballs and a Grilled Watermelon and Beet Salad.  The salad tasted just as colorful as it looked, with a great mix of textures both crunchy and soft between the beets, the melon, some roasted pumpkin seeds, and the beautifully bruleed balls of goat cheese, and the bright citrus vinaigrette pulled everything together nicely.  The meatballs had a good even consistency and a well spiced flavor that shown through the tomato sauce that covered them.  Brandy especially enjoyed the cheesy garlic bread that came served on the side, which was slathered in butter.  "If there's anything more comforting in American cuisine than bread, butter, and cheese, I don't know what it would be," Brandy commented. 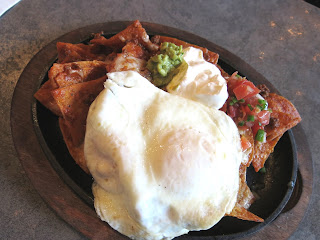 Boxty went with the Chilaquiles and Huevos as her entree.  The chips at the base had perfect crunch, even under the abundance of toppings, and a dose of chicken chorizo gave the dish a good kick of spice.  Boxty especially liked that the mix of pico de gallo and the avocado sour cream, which ensured that every mouthful was slightly different.  "Don't you think that's a nice twist on a traditional chilaquiles?" Brandy asked.  "Well, I can't say that I am familiar enough with what a traditional chilaquiles s we don't really have anything like this in Ireland, but it is rather tasty," Boxty replied. 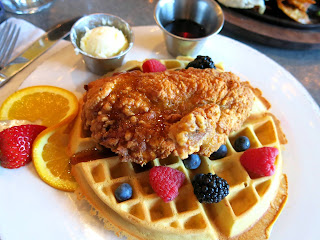 Brandy picked the Chicken and Waffles for her main course.  The chicken had a good thick coating on it that gave a satisfying sort of crunch.  The waffles were also substantial with a good malty flavor that went well with the chicken, especially with the addition of a drizzle of maple syrup.  Brandy did find the choice of adding fresh berries to the dish a little strange, as while they did make everything look nice, they didn't necessarily go with the chicken.  "Though I'm usually the last one to complain about adding a little fruit to a plate for some color," she reasoned.

Not just the moderately priced and tasty food at AMK had put Brandy in a good mood, but also the exceptional service and the attention to detail in the way the dishes were plated, something that a lot of restaurants simply don't bother with when it comes to brunch.  Sitting back and enjoying their cocktails to the last drop, Brandy wondered if Boxty had seen the value in using a classic as a foundation for building new and exciting things upon.  "I think I do see what you mean now," Boxty admitted, "The classics are classics for a reason, and even they were once built on the foundations of even older classics."  "Exactly!" Brandy exclaimed.  "So, what I'm thinking now is that we do The Rise and Fall of Sweet and Savory as a gritty reboot of Breakfast at Tiffany's," said Boxty with a gleam in her eye.  "Oh goodness," Brandy stopped her, "Now we need to have a discussion about remakes."

The Short and Sweet Revew 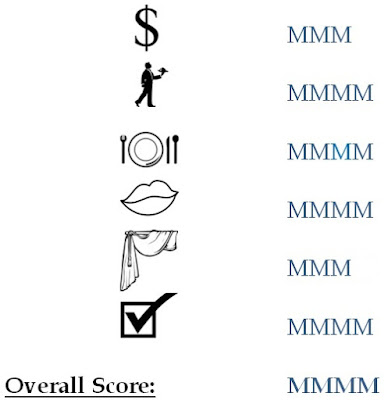