5411 Empanadas or The Whole World in Her Hand 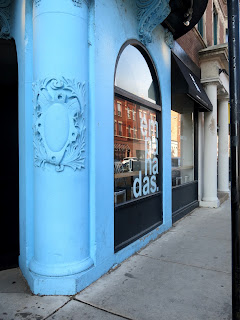 Brandy's schedule has been getting a little out of hand as of late.  "First, there's the bocci bowling tournament, then my haiku club meeting, Quilter's Anonymous, and finally the quarterly clogging recital, and that's just in the space of twelve hours!" Brandy exclaimed while going over her calendar, "How on earth am I going to do all of this and sneak in some brunch?  What I need is a handheld brunch, something portable and mess free.  Why oh why are there no Cornish pastie shops in Chicago!?" 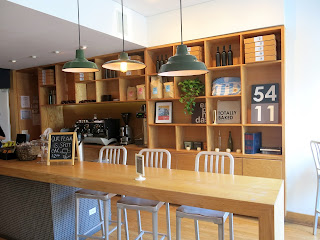 Luckily, after some research, Brandy located the next best thing, empanadas.  Specifically, 5411 Empanadas in Lakeview, which offers a huge variety of meat, vegetarian, sweet, and even breakfast flavored handheld baked dough pockets.  The shop was cozy and sweet with a relaxed feeling that seemed perfect for a quick respite from running errands or a grabbing a snack before seeing a movie.  The warm woods were complimented by a smattering of the signature powder blue color, and plenty of sunlight made everything feel rather cheerful. 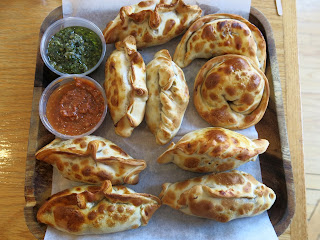 Brandy was so overwhelmed by the amount of choices on the menu that she ordered the majority of them to get a taste of what was on offer.  The empanadas arrived rather quickly, though Brandy had already forgotten what all she had ordered.  Luckily, each empanada was shaped specifically to its filling, and handy guides on the table could be referenced to see which one the diner was about to enjoy.  "This is ingenious!" Brandy exclaimed, "I'm not saying my memory is going, but sometimes the largest cup of coffee isn't enough to keep me paying attention." 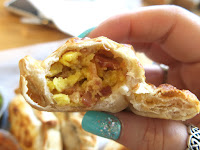 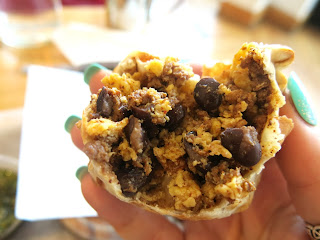 Brandy started off with some of the breakfast varieties, which came in Bacon Egg and Cheddar, Chorizo Black Bean and Egg, and Veggie and Egg.  The dough on all of the empanadas was much the same, with a thin and crunchy exterior and a slightly chewy interior that was the perfect thickness.  The veggie variety was unexpectedly hearty, being filled with more beans than greens, meaning it wasn't just some throw away vegetarian alternative.  The chorizo and egg was hearty as well and nicely spiced, but a little on the dry side.  Luckily, that was helped by the addition of the Red Hot and Chimichuri sauces served on the side.  The bacon egg and cheddar was probably Brandy's favorite of the three, being a combination of classic American breakfast flavors, but presented in a new way. 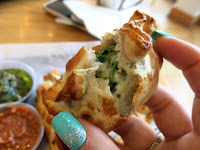 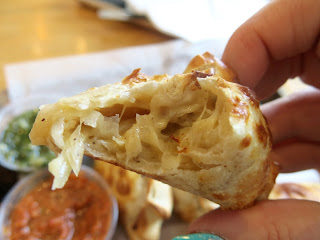 Next, Brandy indulged in some of the vegetable varieties.  The Mushroom Thyme and Blue Cheese was a major burst of flavor with the herb flavor up front, and then the pungent cheese roaring in.  ""My goodness!" Brandy exclaimed, "Yet another example of a vegetarian option that is bursting with just as much flavor as a meaty option.  Vegetable eaters everywhere can rejoice that they're not left out here!"  The Spinach and Cheese was another tasty bite, with plenty of melty goodness and a nice feta flavor that reminded Brandy of a spanakopita.  The Sweet Corn was maybe the only disappointment, as it was more savory than expected with a good dose of pepper to it.  Lastly, there was the Caramelized Onion, which Brandy found had a lovely sweetness to it with lots of cheese, though she thought this one was better as an accompaniment to some of the others, rather than one that could be eaten on its own. 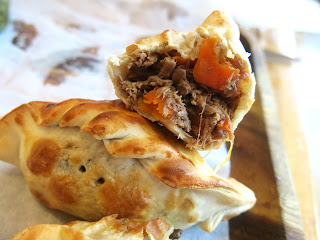 Moving on to some of the more meaty varieties, Brandy sampled the signature Malbec Beef.  The meat was very tender and lean and reminded Brandy of a pot roast.  Brandy especially liked this one with the red hot sauce, which gave it a decent kick.  Perhaps Brandy's favorite of the day was the Bacon Goat Cheese and Date, which was the perfect mix of sweet and savory with the smokey bacon, creamy cheese, and natural sweetness of the finely chopped dried fruit.  "Now this is a brunch empanada if I've ever tasted one!" Brandy gushed. 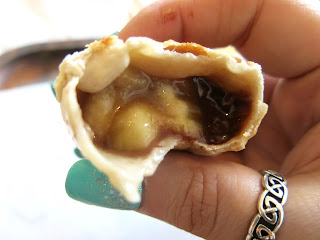 Rounding out her meal, Brandy ordered the only fully sweet empanada, the Nutella and Banana.  The filling on this one was a little liquidy, making it more messy than the others, and tasted more of banana than Nutella, not that Brandy minded.  "I would say that to fully satisfy a sweet tooth, one might need to consume a few more of these," she posited.

Now that she was full to the brim with empanadas, Brandy felt ready to face her busy day.  At $2.50 a piece, these little pockets of joy had hardly put a dent in her pocket, and the convenience of their presentation had her making mental notes for the next time her schedule got over booked.  "Though I usually do advocate for a brunch that is slow and relaxing, it's good to know one has the option of a delightful and filling brunch on the go.  Now, off to judge the Mrs. American Crochet competition!" 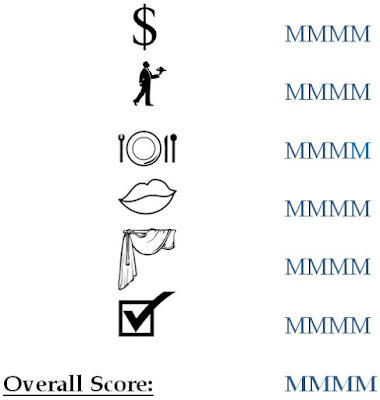