Postcards from Bunny: International Lunching at Roti and Hakka Bakka 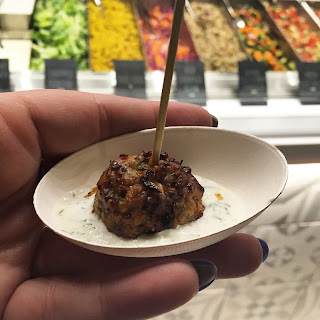 Because Bunny travels so much, she often gets attached to certain international delicacies, and then when she moves on to her next destination, finds herself craving those treasured dishes from afar.  "I can't tell you the number of times I've wanted nothing more than a hot bowl of ramen while traversing the Alps or am suddenly over taken by the desire for empanadas while sailing across the Aegean Sea," Bunny often pouts to Brandy, "It's one of the reasons I do so love Chicago, as I can pretty much find everything I'm craving somewhere in the city." 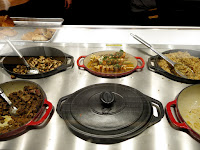 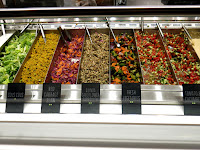 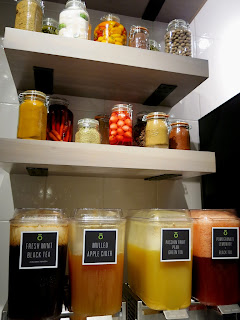 On a recent stop into Chicago for a round of holiday shopping, Bunny made a point of seeking out some of her new found favorites from around the world for lunch.  First stop was to the newly re-vamped flagship location for Roti Modern Mediterranean in Northbrook.  The restaurant, which has locations both inside the city of Chicago as well as in a few other US cities, is in the process of moving towards some more fresh, chef inspired menu options with their signature rotis (a pita stuffed with spiced and roasted meat and other toppings), salads, soups, and even beer and wine.  Bunny just loved that the concentration of the new menu had been squarely placed on using authentic Mediterranean ingredients while keeping everything healthy, fresh, and made in house where possible.  Bunny especially liked the Spicy Lamb Meatballs, which packed a surprising kick, the crunchy (and naturally gluten free) Falafel, and the absolutely delicious hummus and pita chips.  The entrees at Roti, which featured different flame grilled meats and toppings, came as the aforementioned pita sandwich, or in a rice bowl or salad.  The sides and toppings also really impressed Bunny, such as the house made rosemary pickles and Quinoa Caulifower Tabouli.  Being that such care had been put into the choosing of the ingredients (the salmon was sustainably raised, the beef grass fed, and the chicken antibiotic free) Bunny had to agree that, as their slogan put it, this was indeed "food that loves you back."  The new items on the menu are exclusive to the Northbrook location for now, but will eventually roll out into all the other Chicago locations throughout 2016, and then to every one of the 22 restaurants nationwide. 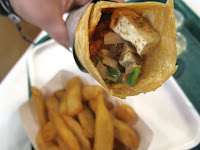 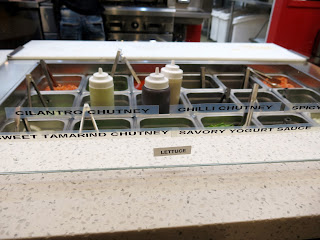 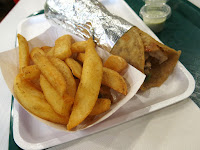 Another restaurant new to Bunny was Hakka Bakka in Lincoln Park, just a little beyond the Depaul campus on Fullerton.  This fast casual spot features a type of wrap native to Kolkata in India, the kati roll, which is made with a thin grilled flat bread and filled with meat and veggies, then a variety of sauces and house made chutneys.  Lamb and chicken were the meats on offer, which were tempting, but when Bunny saw that house-made paneer cheese was an option, she immediately opted for that.  The preparation that was suggested to Bunny was to have the thin bread layered with egg, then to dress the reshmi flavored paneer (there were three options for flavorings; the white, slightly spiced and creamy reshmi, the red and spicy tikka, or the green cilantro and mint hariyali) with onions, cucumber slices, and all four of the house made sauces.  The point of putting each of the sauces into the roll was to make each bite unique, and that they most certainly did, creating pockets of creamy, spicy, sweet, and herby sensations.  Bunny also adored the the Mango Lassi, which she could have drank gallons of, and the Marsala Fries, which had been hand cut and sprinkled with a spice mix made in house to create the perfect hybrid of Indian and American cuisine. 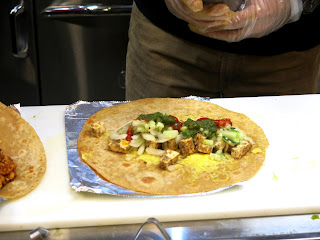 "Of course I could stop for lunch at some burger place or grab a cold sandwich somewhere, but why on earth would I when Chicago has options like these?" as Bunny put it, "If I ever find anyone in this city who claims to be bored by the same old food, I will personally escort them to the nearest optometrist so they can get their vision evaluated.  The world is literally all around us, and it is delicious!"

The writers of this blog were invited by the restaurants mentioned in this post to sample their wears free of charge in order to facilitate the writing of this post.
Posted by Bunny and Brandy at 10:53 AM