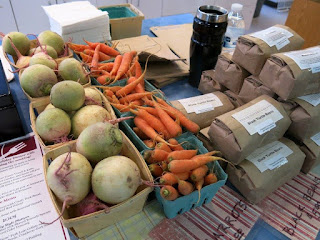 It was an unusually warm day for December in Chicago, so Brandy decided to take advantage of the sun and get some holiday shopping squared away.  Being that all her friends were "foodies," she decided the best thing she could do would be to find somewhere selling locally produced goodies, so she zeroed in on the Evanston Winter Farmer's Market, which is being held two weekends a month at Immanuel Lutheran Church, whose congregation regularly supports local and national initiatives to fight hunger. 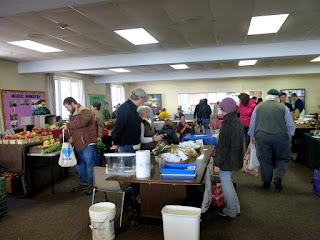 The atmosphere inside the Farmer's Market was immediately welcoming.  A few tables were scattered outside the church, boasting some winter berry sprigs and other assorted produce and flowers.  The small upstairs space was bursting with booths of fresh produce, hand made goods, and even a table for cheese tastings.  Everyone seemed to be in a happy frame of mind, smiling and greeting friends and strangers alike, helping those unfamiliar with the layout of the market, and sharing recipes ideas with the farmers at the booths. At the center of it all was the kitchen where chefs Sarah Stegner from Prairie Grass Cafe and Tracey Vowell from Three Sisters Garden were whipping up something special. 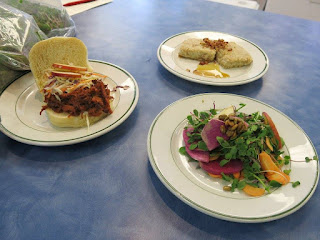 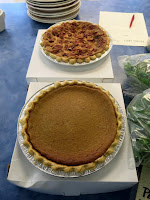 Their menu mainly consisted of dishes created using products from local growers like Nicholas Farm, Genesis Growers, Catalpa Grove, and Chef Vowell's own Three Sisters Garden.  Everything was freshly prepared and all natural, giving the community a wonderfully filing and healthier option for their breakfast.  Though tempted to try everything on the menu, Brandy settled for just two dishes; one sweet and one savory. 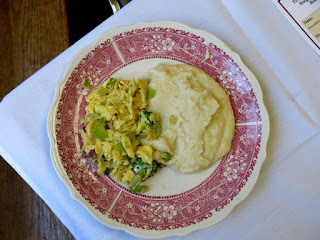 First off, Brandy tried the Creamy Three Sisters Garden Cheese Grits with Scrambled Genesis Growers Eggs with local vegetables.  The veggies were lovely and crisp while the eggs were the perfect density; not too fluffy, but not rubbery either.  The grits were very creamy, still with a little bit of texture to them, and they had a true corn flavor with a subtle nutty cheesiness.  As opposed to a lot of the heavier brunch items Brandy indulges in on a regular basis, this dish left her feeling light, yet satisfied.  "This is exactly what I needed for a day of running around.  A good dose of protein, starch, and vegetation that isn't going to weigh me down," Brandy commented. 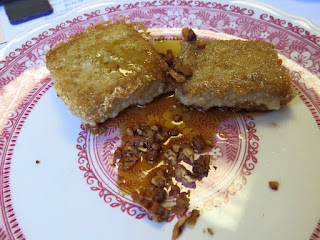 On the sweet side, Brandy went for the Oatcake with maple syrup and candied pecans.  As it was brought to the table and Brandy caught a whiff of the warm Burton's Maple Syrup (her favorite maple syrup of all time) and instantly felt a smile forming on her lips.  "Such a simple combination of the familiar scents of maple and cinnamon, but it feels like a warm hug on a cold winter's day," Brandy sighed with delight.  The oatcakes were truly something unique with a very light crisp on their exterior and a creamy, almost custard like interior.  The crunch from the pecans (grown by Vowell and candied by Stegner) was just the proverbial icing on the cake.  "If there was ever a better match for a few strips of bacon, I haven't tasted it," Brandy proclaimed. 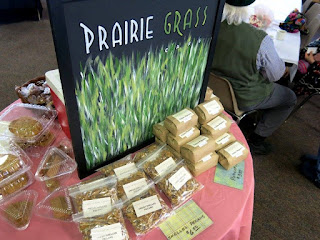 The chefs were also featuring some of their hand made goods for sale, such as Pecan and Pumpkin pies, spiced popcorn, butterscotch cookies, salad dressings, pecan milk, and herbed goat cheese, which truly showed off the products from Three Sisters Garden and some of the other local growers.  This is where Brandy went hog wild, so to speak, snapping up everything she could handle so that she could stuff the stockings of all of her friends with delicious, local, mindful treats.  "Nothing's better for stuffing a stocking with than a bag of warm nuts," she said to herself, then giggled like a school girl at her own immature witticism.

The last Farmer's Market at Immanuel Lutheran Church before the holidays is on December 19th, so make sure to mark your calendars and get out there to get your own stockings stuffed with goodies from Chefs Stegner and Vowell!

The writers of this blog were invited to try some of the products mentioned at no charge in order to facilitate the writing of this post.
Posted by Bunny and Brandy at 10:52 AM