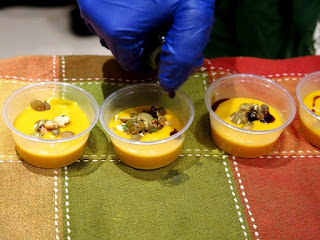 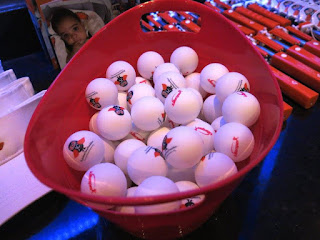 It's not every day a famous chef turns up on one's doorstep to give one cookies.  It's not every day one sees four chefs prepare some extraordinary dishes and then play each other in a bitter ping pong tournament.  It's not every day one is able to wander about a Chicago landmark after hours, sampling plates from as many restaurants as possible.  For Brandy, these things may not happen every day, but some times they do seem to happen every week, as she is continually surprised by the frequency, quality, and creativity behind some of Chicago's biggest food events. 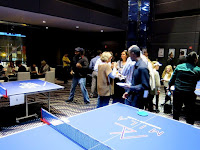 A few weeks ago, Brandy had the privilege of attending the Third Annual Ping Pong Ball at the Hard Rock Hotel.  The event, which benefits Jackson Chance, a charity that provides travel assistance and other help for families with children in neonatal intensive care units, for the first time partnered with The Trotter Project, bringing in four all star chefs to host the pre-event VIP reception. 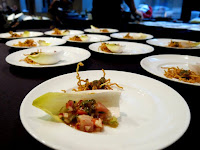 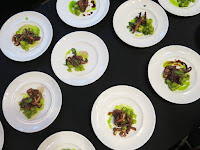 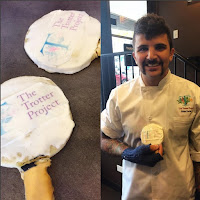 As a preview to the event, Brandy had the extreme joy to be visited by one of these chefs, Richie Farina, formerly of her beloved MOTO and a Top Chef contestant.  Richie was kind enough to bring Brandy some hand made ping pong paddle cookies sporting the logo for The Trotter Project, and organization founded by former Charlie Trotter proteges that aims to mentor and inspire future generations of chefs. It was Chef Farina who drew smiles from the crowds at the VIP reception, not just because of his amazing octopus dish with basil pesto, but because he came dressed to compete against his contemporaries, Bill Kim (UrbanBelly, BellyQ, BellyShack), Phillip Foss (El Ideas) and Art Smith (Table 52) in a friendly round of ping pong.  After the chefs had their turn, the ping pong tournament began in earnest with regular people from across the city and also some professionals participating, all while chowing down on food from Chuck's (one of the Hard Rock Hotel's signature restaurants) like Chicago Dog Pizza, Iron Chef Sliders, and Loaded Tater Tots.  The tournament combined with a silent auction produced over $200,000 for Jackson Chance. 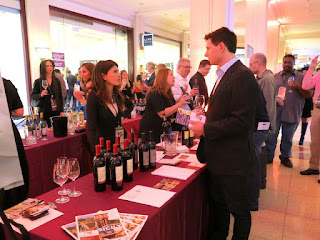 Similarly, Brandy was recently introduced to the LuxeHome Chill Wine and Culinary Event, held inside Merchandise Mart and benefiting The Lynn Sage Foundation, Saturday Place, and the Respiratory Health Association.  Over 50 restaurants participated in this incredible night as well as dozens of wineries.  "Why, this seems to be Chicago Gourmet all over again, but in doors and with only two hours to explore!" Brandy exclaimed once she had been set loose inside the massive complex. 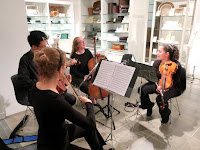 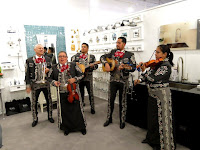 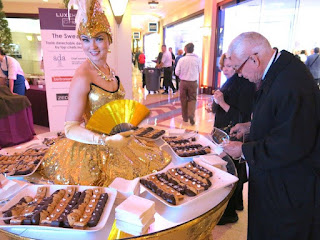 While wandering around to get the lay of the land, one word came to Brandy's mind: whimsy.  Multicolored lights shone in every hallway, pockets of live music were everywhere (string quartets, jazz bands, pianists, singers, even a mariachi band and a trio of tuba players), a team of people riding through the crowds on gigantic bicycles pouring wine samples, women on stilts dressed in ivy and flowers who posed outside the showrooms like living sculptures, and even a woman in a gorgeous Vegas style gold dress that doubled as a dessert table.  Around every corner was some new delight, some new wonder, and it didn't take long for Brandy to become utterly enchanted and delighted by everything. 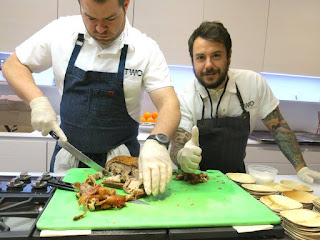 As for the food, stations were simply everywhere.  Restaurants set up beautiful displays inside the already posh showrooms, making them feel less like food festival participants and more like living museum displays.  This arrangement worked two fold; the chefs had actual equipment to work with, meaning not only could many of them cook their creations live, but it also meant that the equipment got showcased as well for the crowds of attendees. 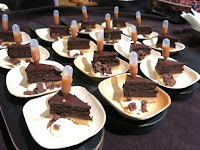 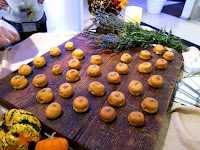 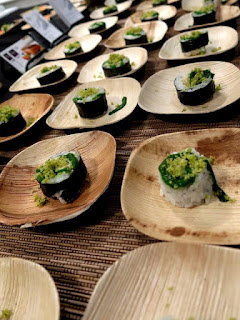 Brandy had many favorite bites from the night: The Chopping Block lead the way with braised short ribs and a sage risotto cake with pickled onion and pine nuts, Jordan's Food of Distinction with a sweet and savory fall tart with pear, fig, brie, and cherry, 25 Degrees came with a scrumptious beef slider topped with fontina and blue cheese, bacon, onion, and arugula,  Osteria La Madia presented a chicken liver mouse filled cream puff, Farmhouse had their butternut squash soup with ginger and pepita brittle, and The Florentine plated a perfect ricotta gnudi with apples, truffle, panchetta, and pecorino cheese.  There were plenty of sweets to be had as well, like chocolate truffles with sea salt from the Cayman Islands tourist board, Bistronamic's infamous "candy bar" with hazelnuts and orange sauce, a chocolate ganche with olive oil and salt from Ada St., and Brandy's favorite of the night, a fudge brownie pie with coconut caramel and a pecan crunch from State and Lake.  Along with the wine, several cocktails were served as well, with Brandy's favorite coming from Spritzology with the simple, yet evocative name "Fall in a Glass." 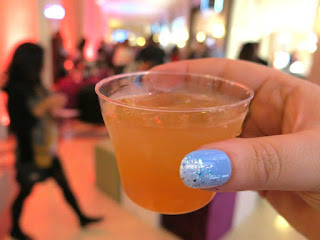 "But I need more time!" Brandy groaned as she began to feel full with only an hour left in the evening, and soon she found herself fantasizing about running to a drug store down the road to buy plastic containers so she could wrap up what she couldn't fit into her gut for later.  "There's only one solution to this problem," she reasoned, "Just as I've learned my strategy with Chicago Gourmet, I'm just going to have to come back next year with a game plan.  Now all I need is a blue print of Merchandise Mart and some more comfortable shoes..."

Make sure to check out loads more pictures from the events on Bunny and Brandy's Facebook page.

The writers of this blog were invited to attend the mentioned events free of charge in order to facilitate the writing of this post.
Posted by Bunny and Brandy at 11:03 AM