Unite Urban Grill or A Study in Contradictions 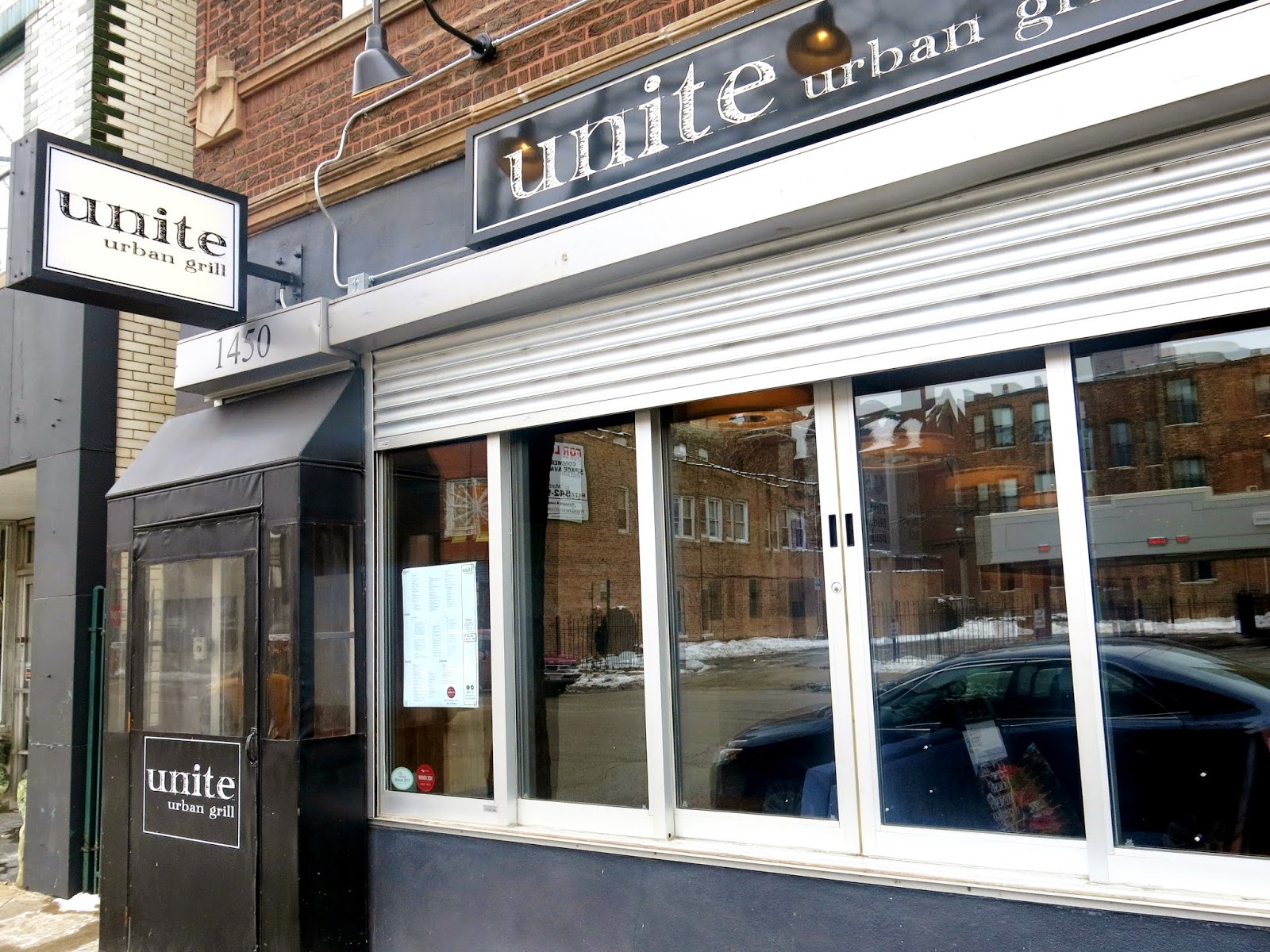 "You have got to talk to Bailey for me!" Hawk cried to Brandy over the phone one day, "She spent all of the Christmas break watching food documentaries on Netflix and now she's terrified to eat anything but kale and quinoa!  You have to help me, Brandy.  A man cannot live without bacon!"  "Calm down!" Brandy said, "I'll have a chat with her, don't you worry.  If there's one thing I can't stand, it's someone with no sense of balance in their life, and I'll be damned if one of my friends is going to start lecturing others on what they should or should not be eating based on fad diets and unproven testimony."

Brandy decided to take Bailey out to Unite Urban Grill, a West Town hidden gem that recently launched their brunch service, which featured a lot of brunch classics with their own signature twists.  Brandy thought this choice was particularly apropo because of it's back story: opened by married couple Joe and Megan Krouse, the name itself came from the fact that Joe based the restaurant's concept on a combination of his love for grilling and meat with Megan's love of grains, vegetables, and semi-vegetarian cuisine.  "The two of them have come together to to create well balanced cuisine, which is what we should all be striving for," Brandy explained to Bailey.  "But is their food gluten free, organic, heirloom quality, fair trade, cold processed, and raw?" Bailey asked in a panic.  Brandy rolled her eyes.  "Now listen here.  You're going to order a cooked meat dish, you're going to eat it like regular food, and you're going to like it, just as you always have," she said, to which Bailey gave a frightened whimper. 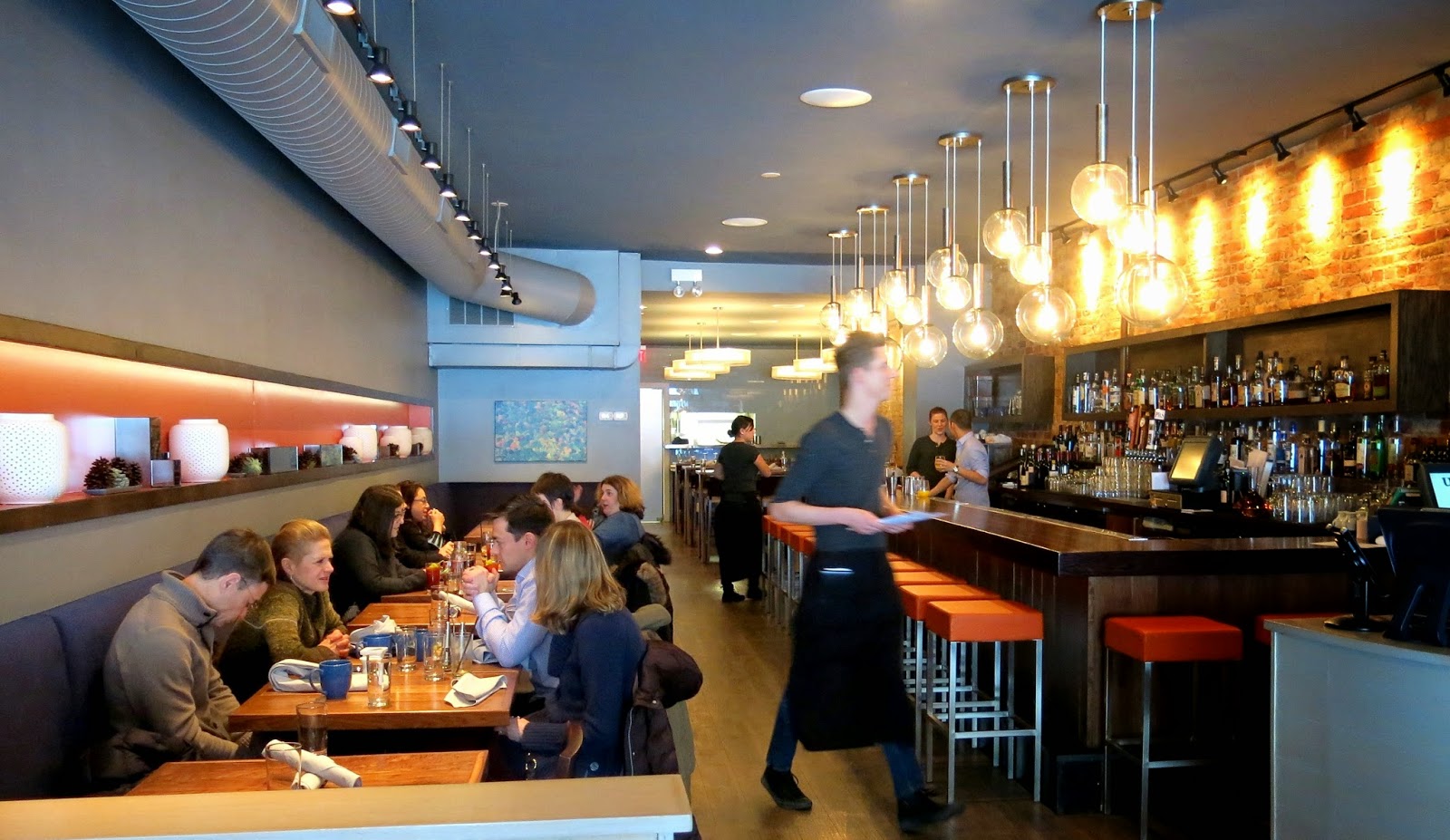 Stepping inside Unite, Brandy was greeted with something she didn't quite expect: a bright and vibrant rather modern and chic looking lounge with comfy blue sofas, warm woods, and colorful pillows, with a sparkling bar area beyond and a dining area with high tables beyond that.  "Perhaps this is rather ignorant, but I was thinking a place with "grill" in the title would be a bit more...pub like," Bailey ventured.  "Exactly," agreed Brandy, mischievously. 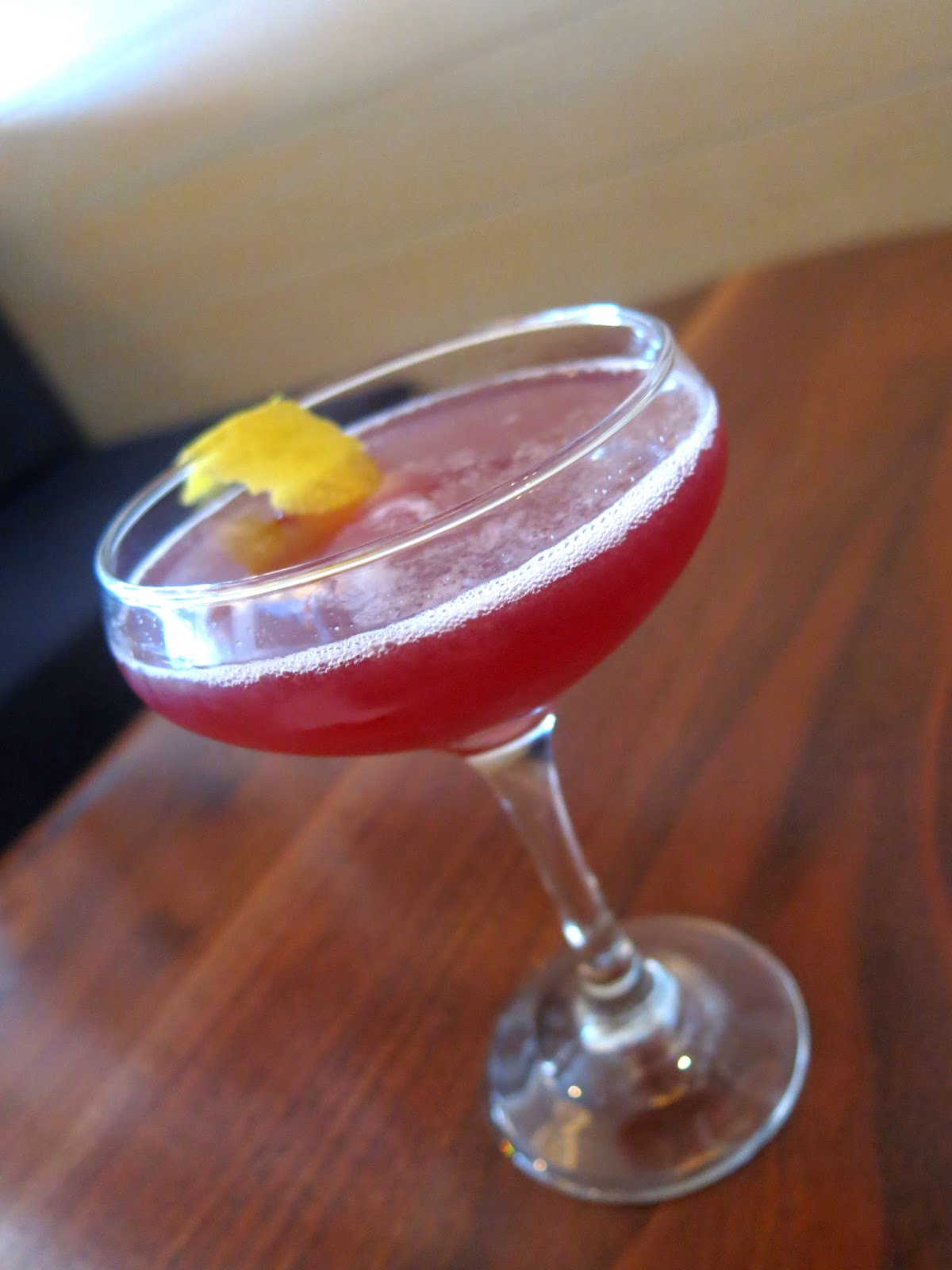 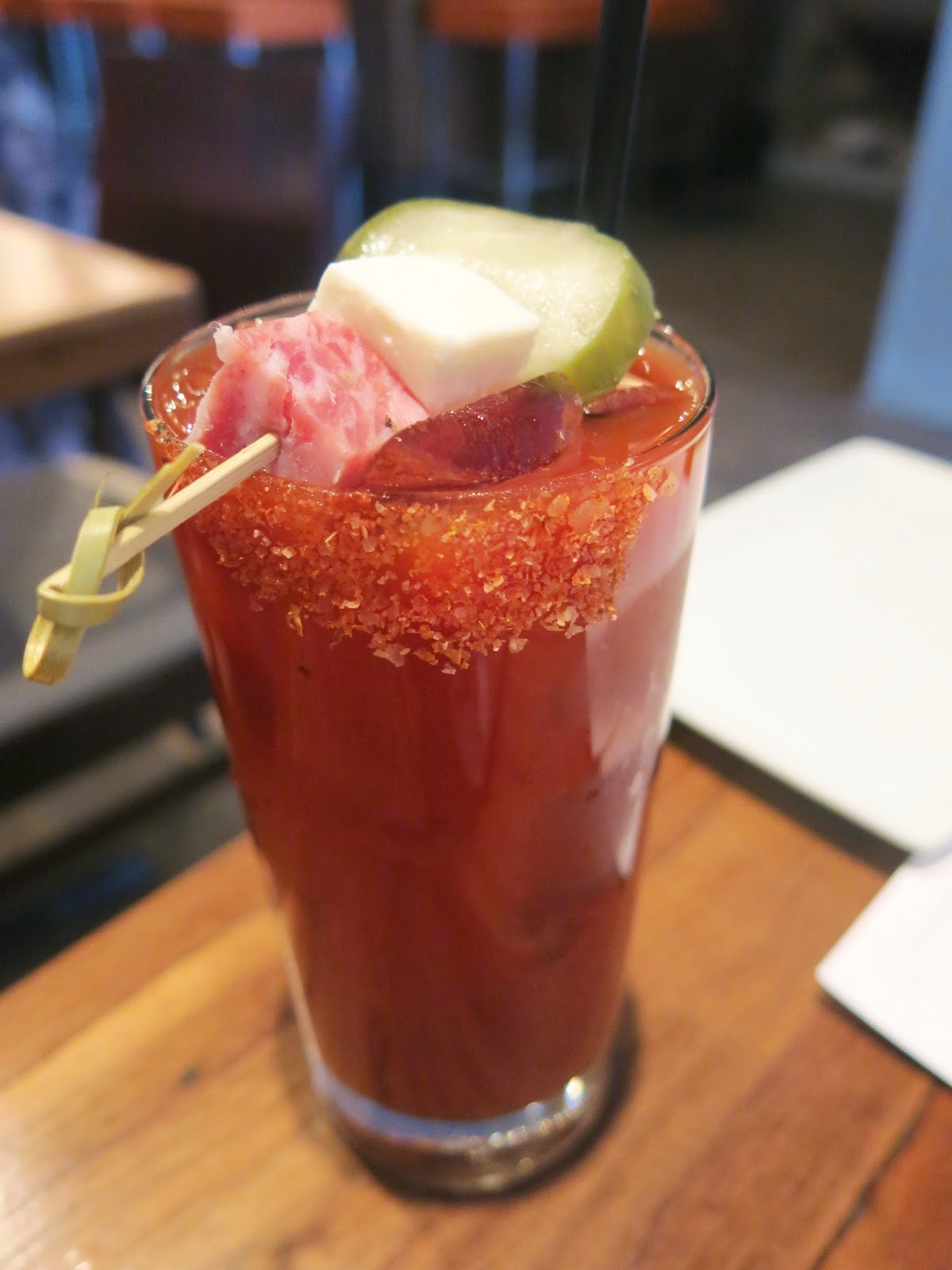 Quickly after being seated at one of the tables near the bar, the ladies ordered a couple of drinks.  Bailey took advantage of the customizable Bloody Mary menu and ordered one made with scotch instead of vodka and a skewer with salami, mozzarella, and a pickle.  Bailey thought the Bloody Mary had a nice subtle kick of spice with an extra richness from the scotch.  Brandy went for a cocktail called the Noble Square, which consisted of vodka, lemon, port, and chocolate mole bitters, which she found to be positively enchanting with its bright flavor, warm spices, and sweet, zingy finish.  "Strangely, it makes me think of summer and winter all at once," Brandy commented, "Yet another harmonious contradiction." 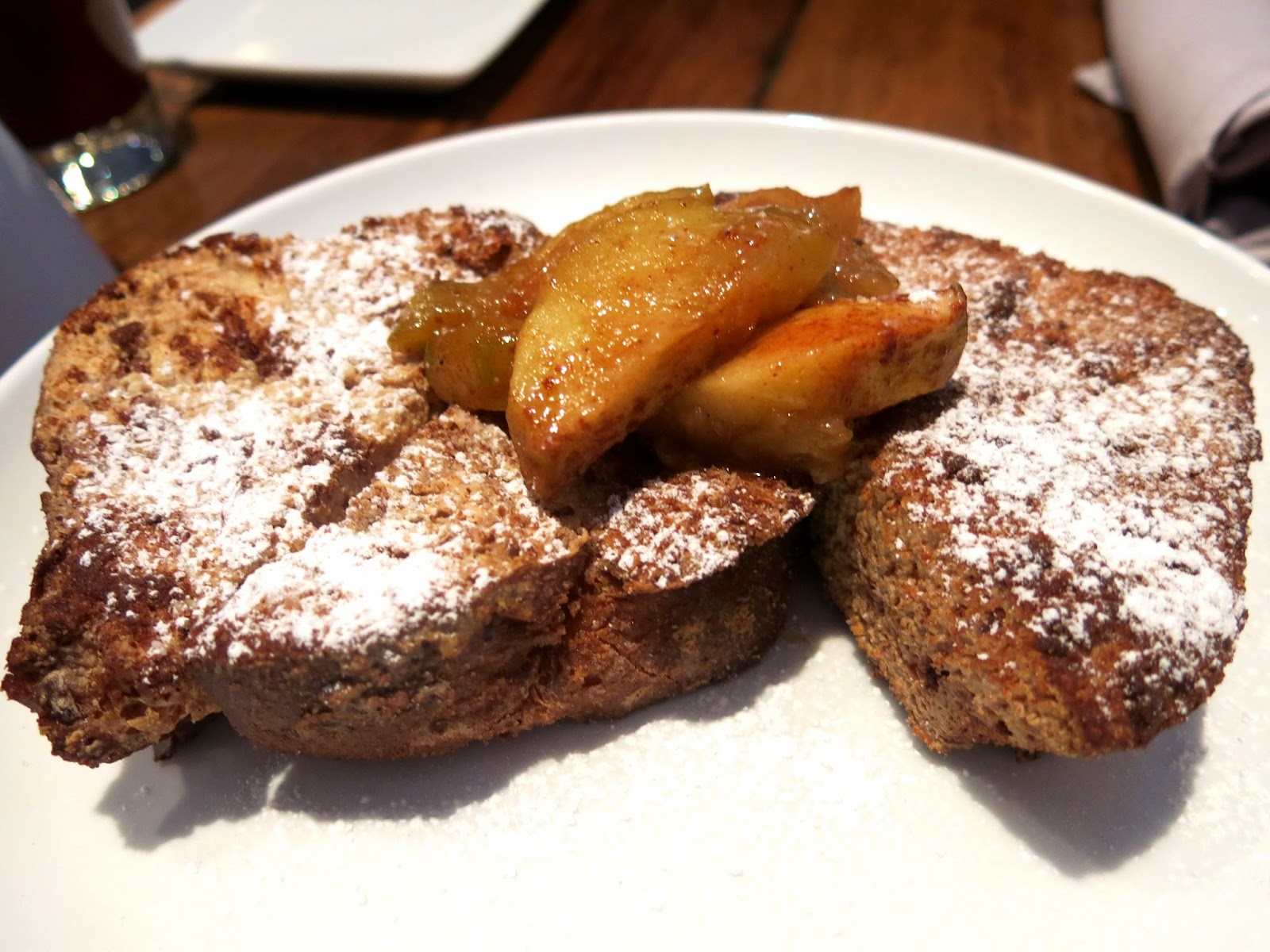 As for food, the ladies started off with a shared plate of the Brioche French Toast, which came topped with roasted apples.  Though simply plated, the French toast was actually quite unique in texture: the outside of the thick cut bread was lightly crisp and caramelized as though it had been rolled in cinnamon and sugar before being put on the griddle, while the inside was airy, creamy, and rich like a bread pudding.  "I've had a lot of French toast in my day," Brandy said thoughtfully, "And this is probably one of the most unique and delicious ones yet!"  The roasted apples on the top were also a nice touch, adding a bit of tartness and spice to each bite, though Brandy and Bailey wished there had been just a little bit more of them, as they found themselves silently wrestling over the last two slices. 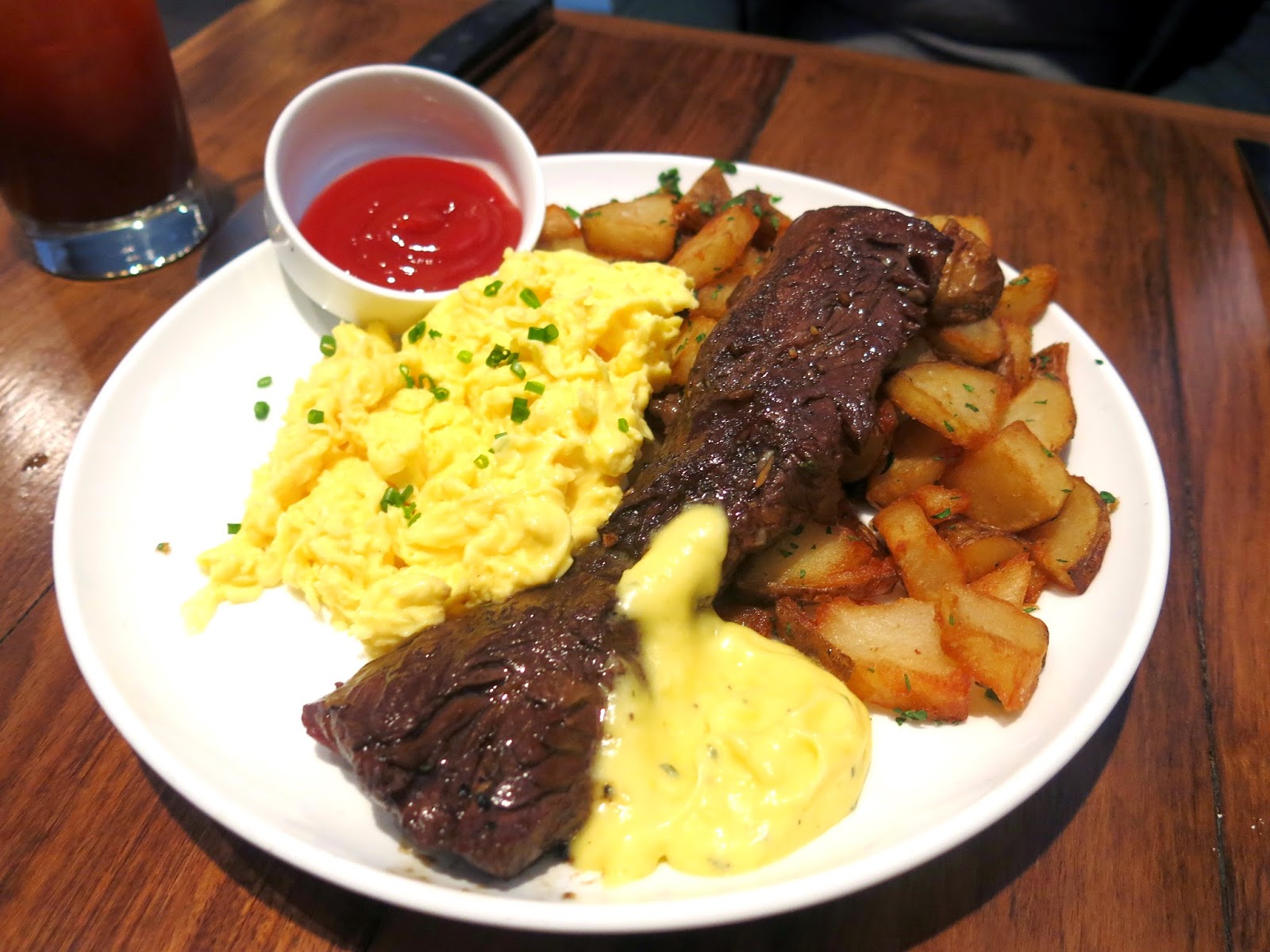 For her entree, Bailey ordered the Steak and Eggs, which consisted of a hanger steak with a Worcestershire glaze, crispy breakfast potatoes, a garlic Bearnaise sauce, and two eggs, which Bailey requested scrambled.  Bailey found the steak a little on the chewy side, but the flavor was spot on with the silky, umami rich glaze.  The Bearnaise sauce was beautifully buttery with a very light veil of garlic flavor that Bailey rather liked, as it didn't overwhelm the palate, and went extremely well with the lightly crisp potatoes.  "I especially like the fact that they used some herbs in the sauce because it adds not only a bit of flavor, but a nice little touch of greenery to the plate, so at least I can pretend I'm eating some vegetation" Bailey observed. 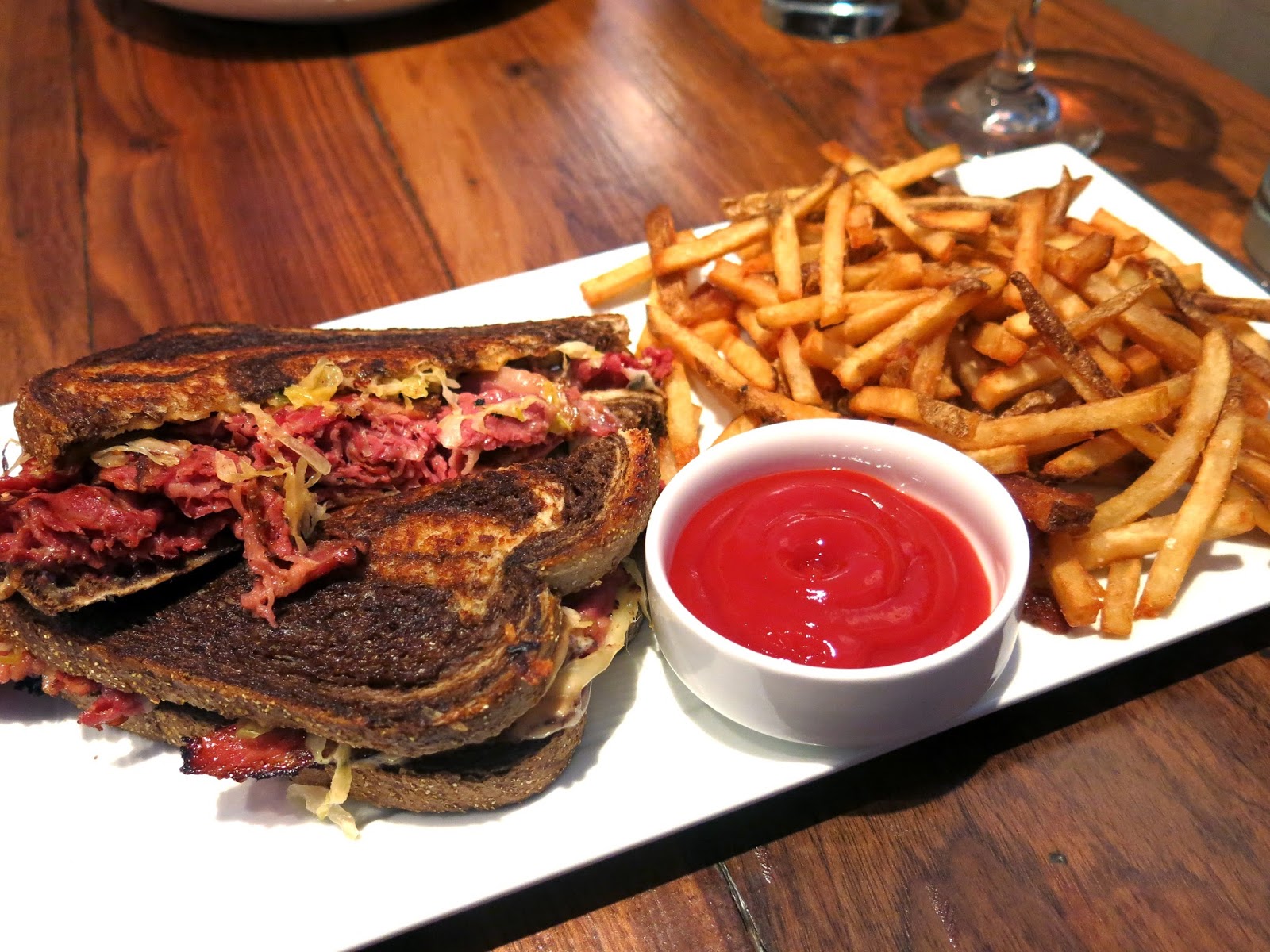 Brandy ordered the Unite Reuben with a side of fries.  The fries were much like a Belgian frite; thin and crispy.  Brandy found them very easy to munch on, enhancing them by dipping them into some sriracha aioli, which their server had strongly encouraged her to try (Brandy was at first terrified of the spicy aioli, but her fears were at once quashed when she tasted the smokey, creamy, and slightly tart sauce).  The main event, the sandwich, looked like a typical Reuben, with its succulent pastrami, melty Swiss cheese, Russian dressing, and sauerkraut on marble rye ("I've never noticed how international a Reuben sandwich is!" Brandy exclaimed), but Brandy was pleased to see that, while fairly traditional, it had been done very well.  "It's not too vinegary or overly burdened with spice from the meat," Brandy mused, "Though I could do with a little more cheese."  "There's never enough cheese to satisfy you!" Bailey laughed.  Brandy began to rebuff her, but found her friend was probably speaking the truth, and so she just continued enjoying her sandwich. 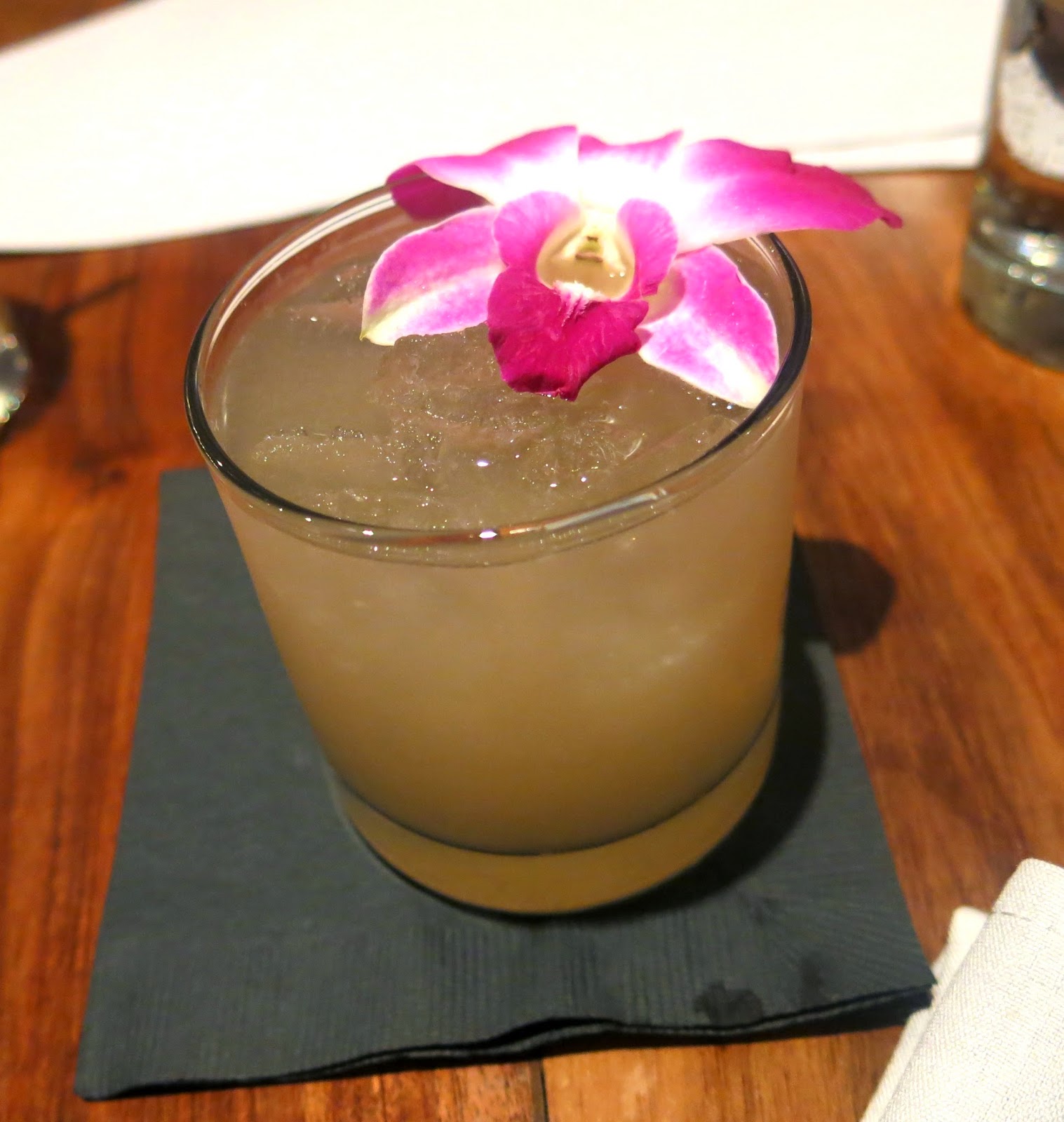 To finish off the meal, the ladies enjoyed one last cocktail, the Bridgeport, which came beautifully presented with a purple orchid in it.  The cocktail itself was a little herbal and floral from some Petal and Thorn Vermouth, and quite citrusy from the use of lime and grapefruit juices.  "Really quite a nice finish to a meal," Brandy observed.  "It's such a feminine drink, yet its strong and bold," said Bailey, "Would you just listen to me!  I think I'm getting the hang of this critiquing thing!"

The well balanced food of Unite Urban Grill certainly did seem to calm a lot of Bailey's food fears with their well prepared versions of classic dishes, knowledgeable service, and bright, friendly atmosphere.  "Now do you understand how one can eat healthy and mindfully without sacrificing needless deliciousness?" Brandy asked her as they headed out of the restaurant.  "Yes," Bailey smiled, "But I still kind of like kale and quinoa."  "That's fine," Brandy sighed, "But for Hawk's sake, when just throw some bacon in there next time." 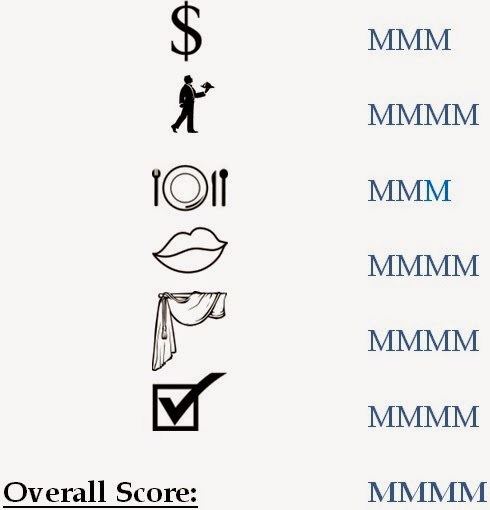