The Gage or The Orange (Mimosa) and the Green (River) 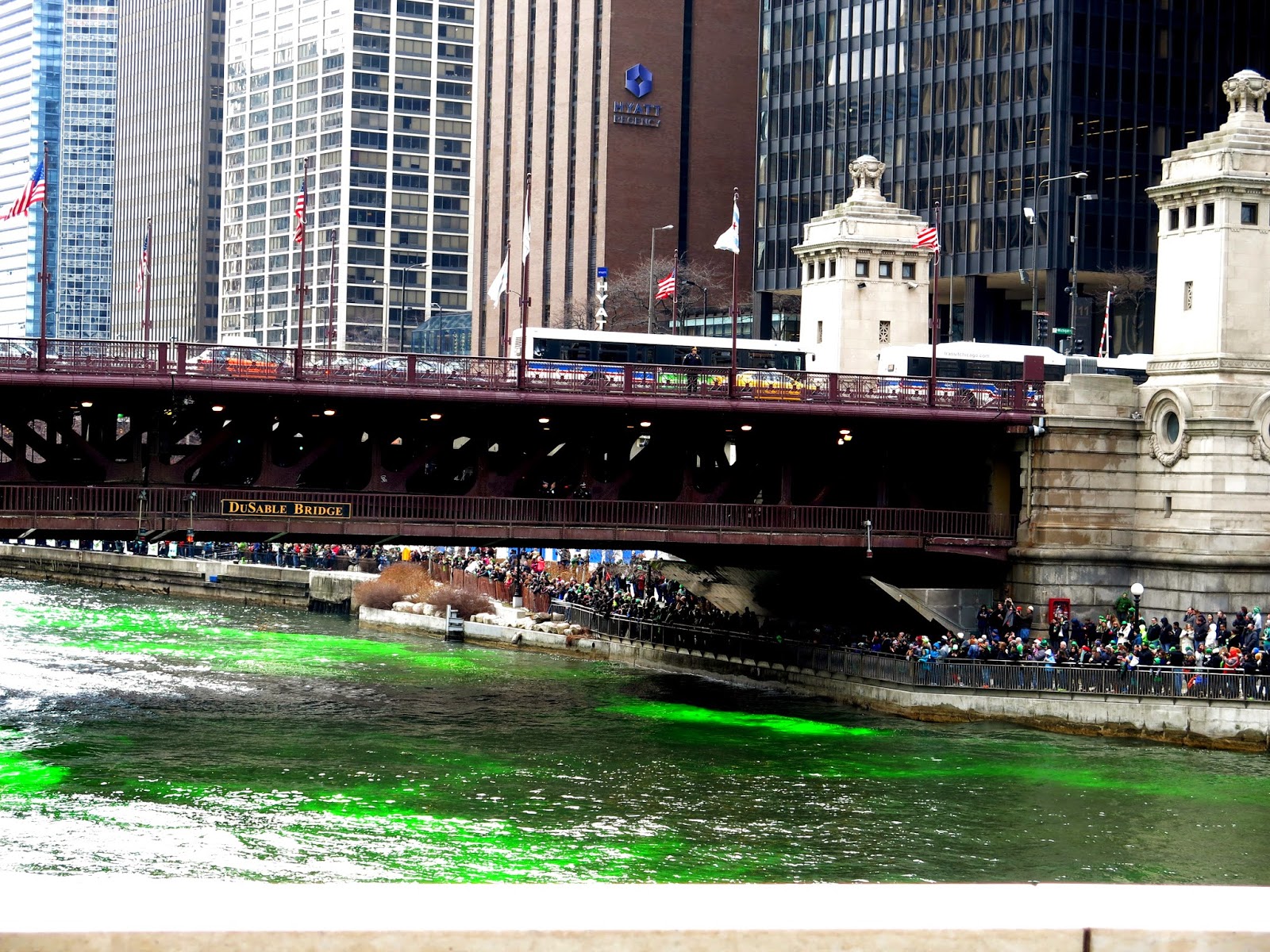 There's nothing quite like Chicago on St. Patrick's Day.  For the last few years, Brandy has managed to avoid the hordes of drunken Chi-rish revelers who crowd up the bars and brunch joints every mid March with their tiny green hats, shiney green beads, and puddles of frighteningly green bodily fluids.  "If Chicago could hold its liquor half as well as it thought it could," Brandy often moans, "I wouldn't mind these sort of arbitrary drinking holidays.  But if my proud Celtic ancestors were to see how these Yankees behave on such a sacred holiday, they'd probably charge the masses with flaming arrows and claymores in full tartan regalia, just to teach them a lesson!" 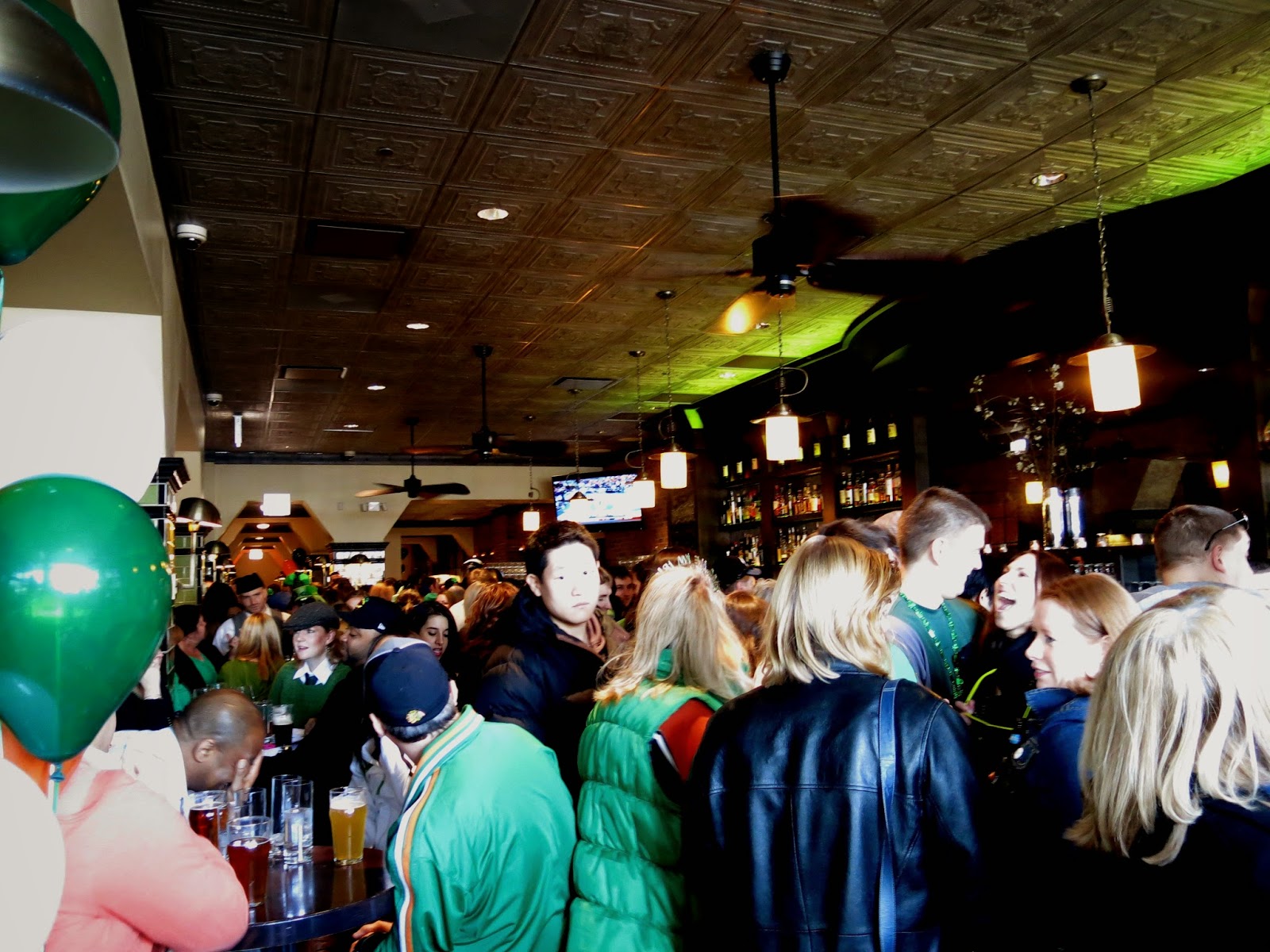 But this year, Brandy could not resist the siren's song of celebration when her dear friend Bailey Blue came calling.  "I've never been to see the river get dyed for St. Patty's Day!  We should go!"  "It's not St. Patty's Day, first off.  It's St. Paddy's Day," Brandy sighed, "And you'll not be getting me out amongst those beer soaked crazies first thing on a Saturday morning."  "Oh please?  We can go have an authentic Irish brunch afterwards!" Bailey pleaded.  As Brandy's moral code strictly forbids turning down any invitation to brunch, this seemed to seal the deal, and it was decided that after the river dying, the pair of them would adjourn to The Gage for some nosh and slosh. 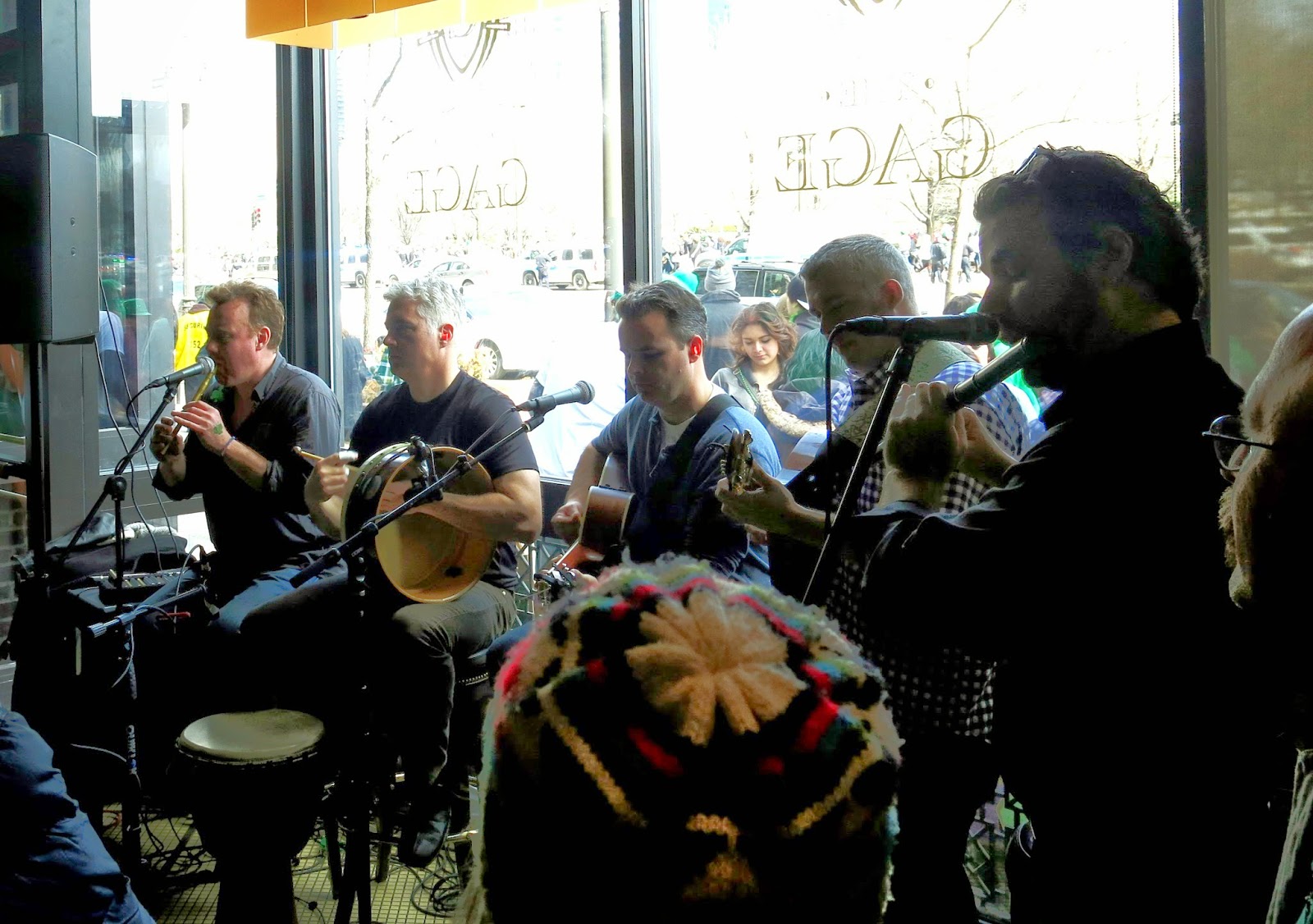 The Gage was in full swing when they entered, with plenty of fun seekers already crowded into the front bar area.  Luckily, Brandy had made reservations ahead of time, so they were taken to a table in the back room straight away.  "Good thinking," said Bailey as they sat.  "I wasn't about to fight all those inebriated idiots for a seat!" Brandy sniffed.  From what Brandy could see of the restaurant, it looked to have a surprisingly casual feel for somewhere so prominently located in the heart of The Loop, but it also had a more sophisticated feeling than a typical Irish pub.  A group of fiddlers were playing music at the front of the restaurant to the delight of the crowd, and a wandering bagpiper really helped to bring in the festive atmosphere of the day. 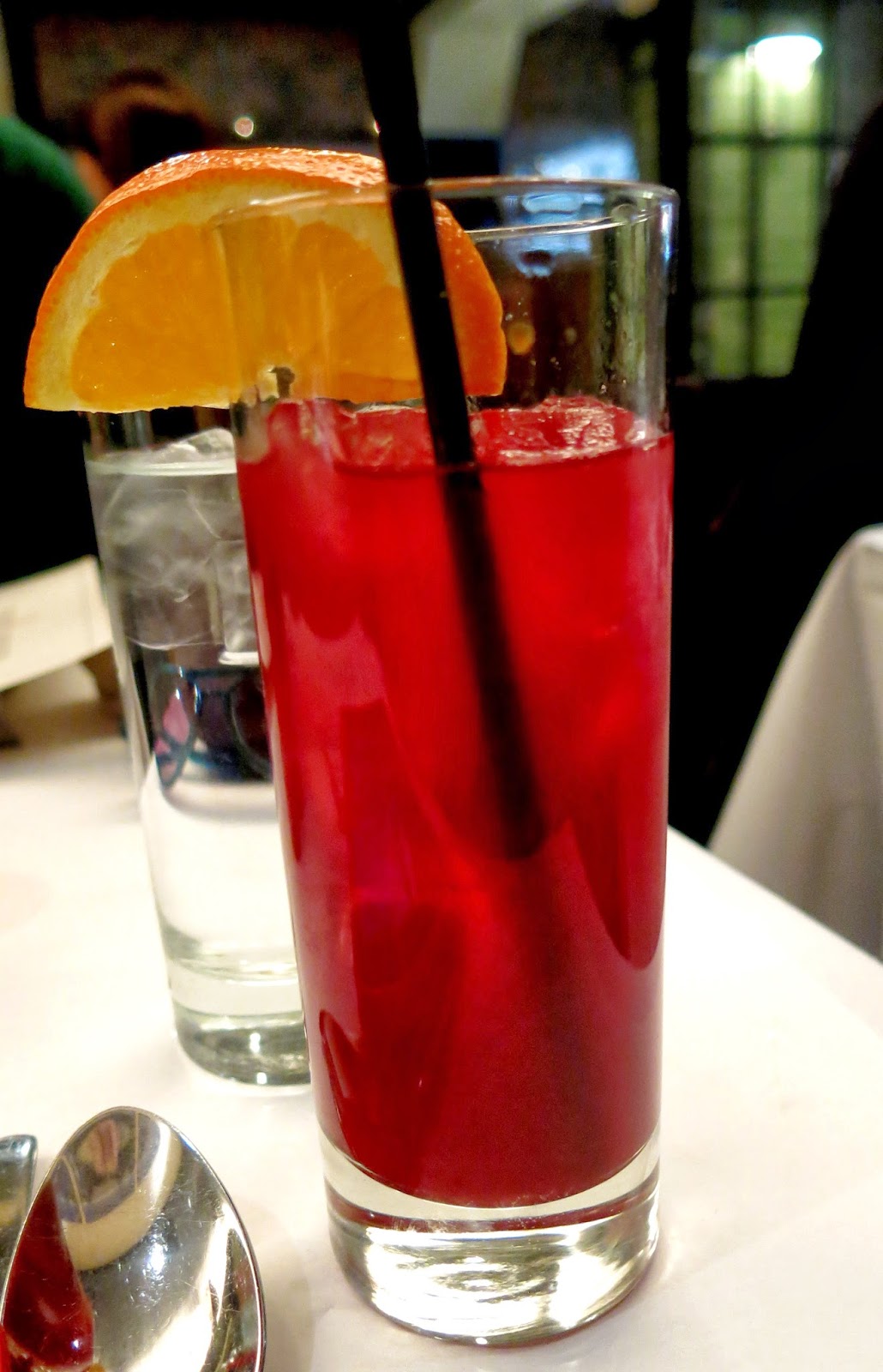 Bailey and Brandy jumped in head first with the day's special drink, a sort of punch made from mead, blueberry, white whiskey, and citrus juices called the Kiss Me, I'm Irish.  The drink had a lovely freshness to it, but disguised its potency behind its subtle sweetness and infinite sip-ability.  "I don't know that it's necessarily Irish, per say," Brandy commented, "Other than that it is red headed." 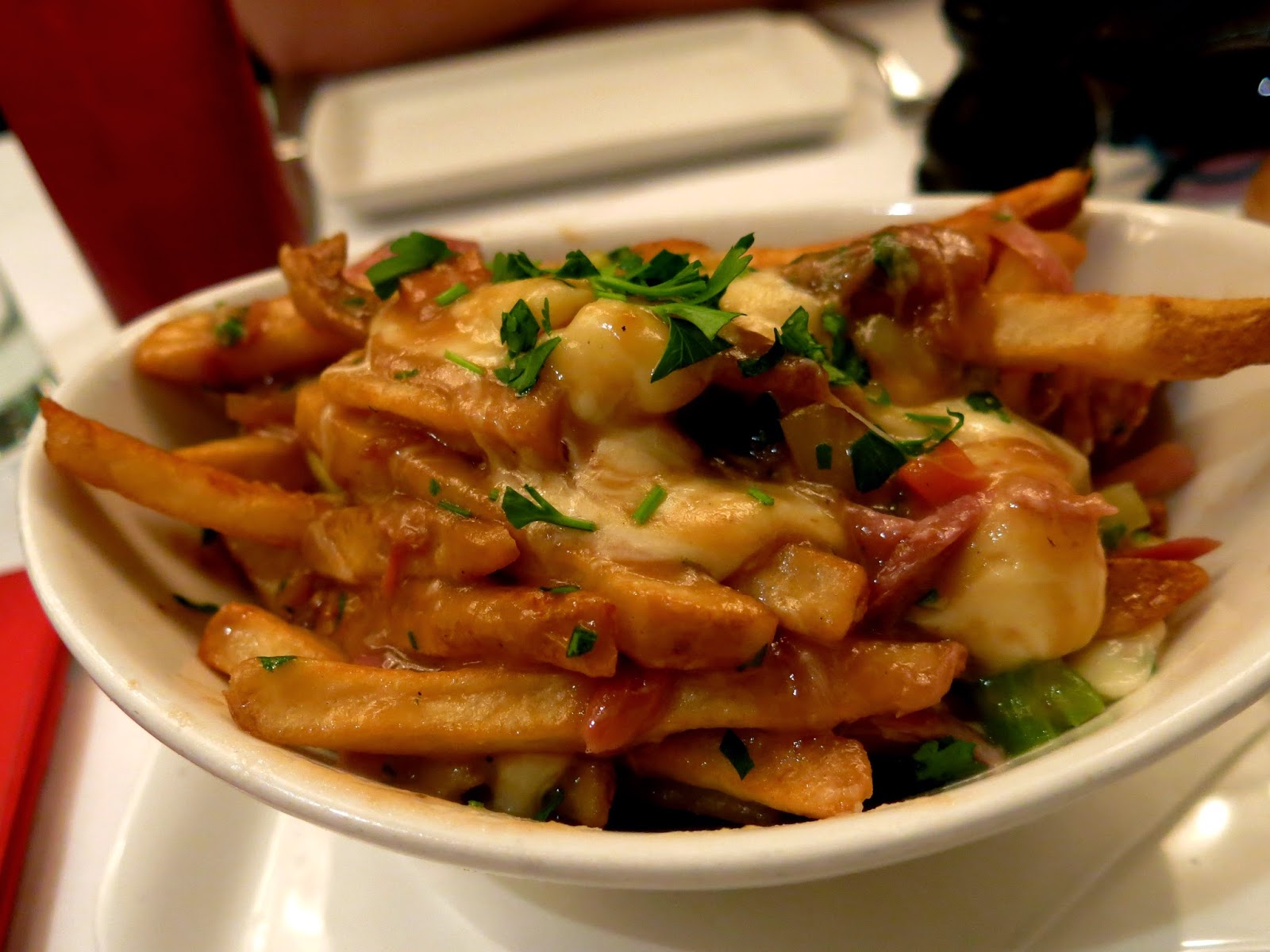 The women then split an order of the House Poutine, which perhaps wasn't authentic to the holiday, but definitely felt in the spirit.  The gravy had a wonderful flavor to it that didn't overpower the rest of the dish.  Brandy was very impressed by the perfectly melty cheese curds, while Bailey wondered that the fries had remained crispy, even under the tasty gravy. 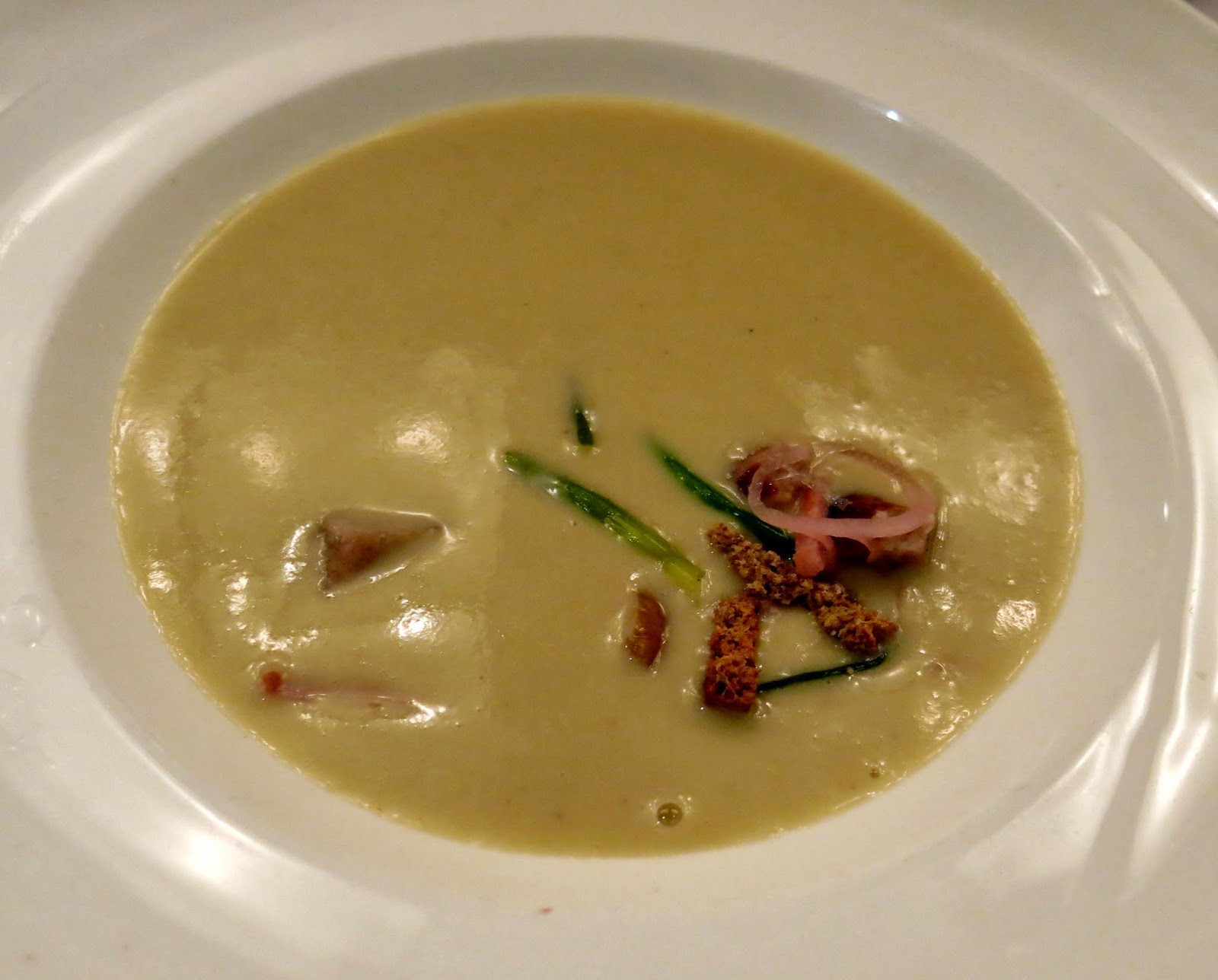 They then moved on to bowls of some Irish Potato-Ale Soup.  The presentation for the soup could not have been more beautiful, with the liquid portion being poured tableside over a bowl of brown bread croutons, chunks of bacon, and pickled ramps.  Though both Brandy and Bailey found the soup a little on the thin side, it did have a nice subtle flavor of beer, and the mix of textures in the garnishes truly made it something special. 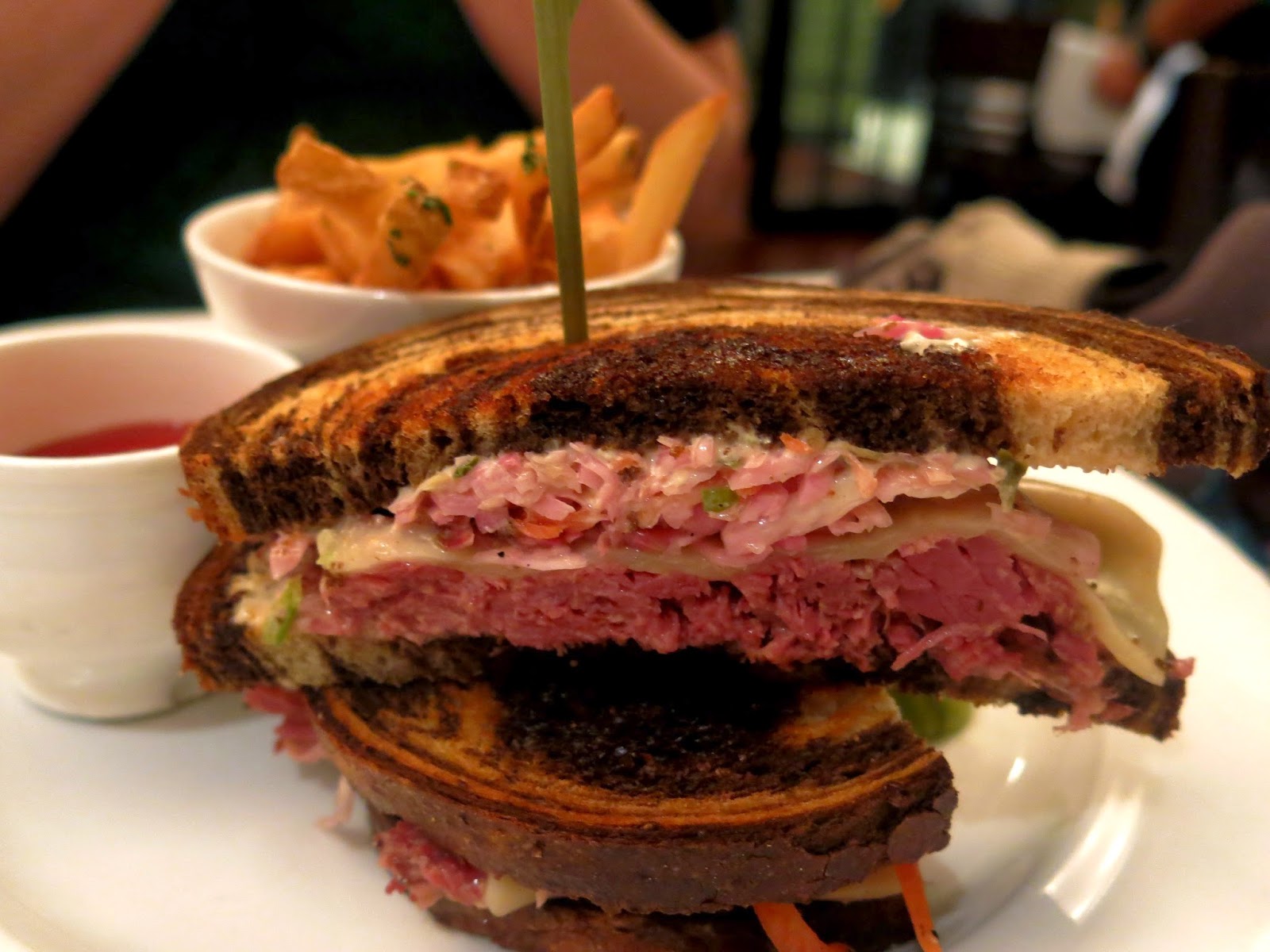 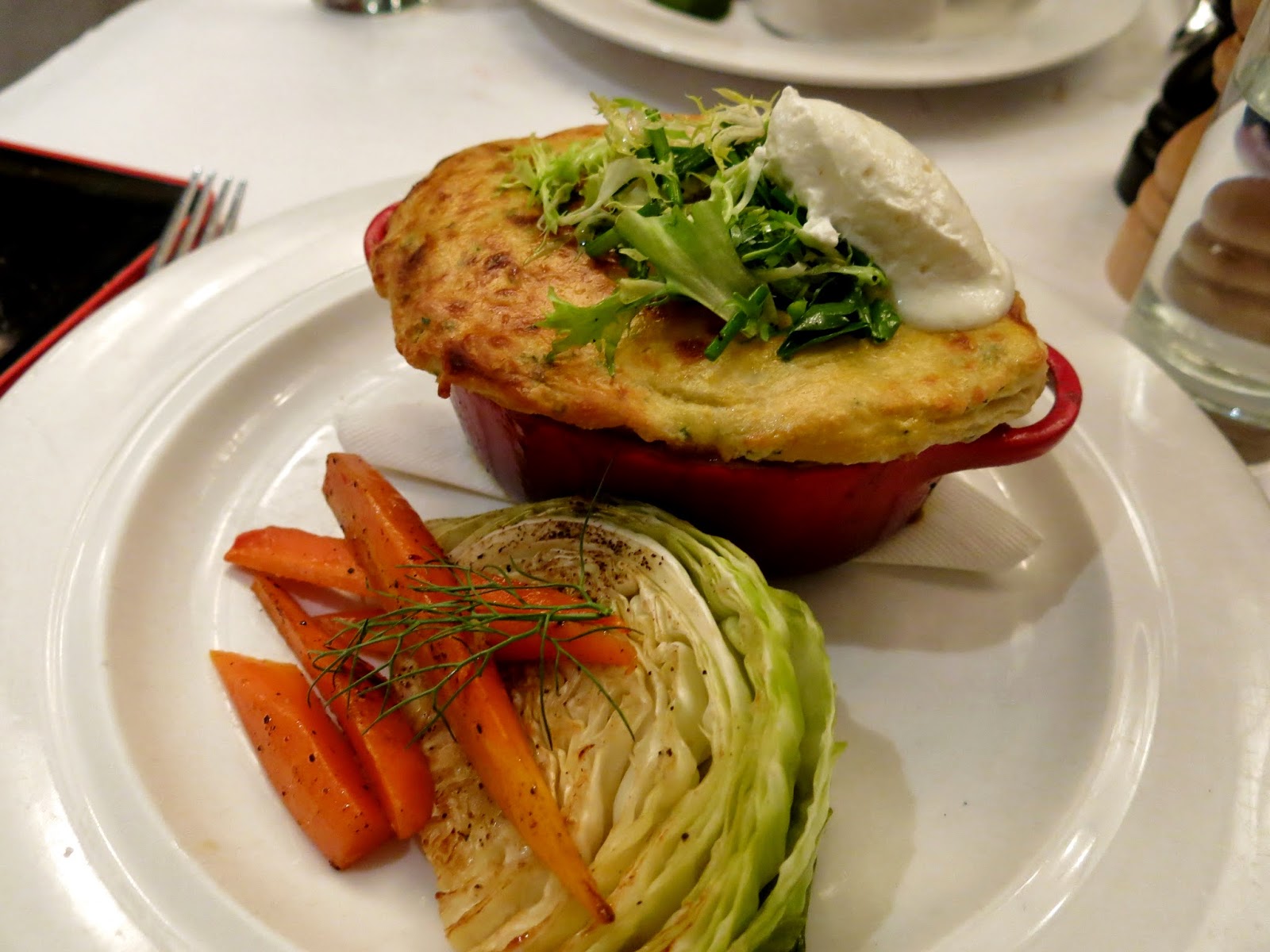 Bailey picked the Corned Beef Sandwich for her entree, as she felt tradition had to be heeded on such an occasion.  The sandwich came on toasted marble rye and decked out with pickled cabbage slaw and Guinness soaked Swiss cheese to give it a Rueben like flavor profile.  Though Bailey said she couldn't really find any Guinness flavor to the cheese, she did love the tangy slaw and the incredibly tender corned beef, which melted like butter on the tongue.  The dish did come with a side of more house made fries, but Bailey found herself unable to partake in any more potatoes for the day.

Brandy decided on the Guinness Braised Brisket Pot-Pie.  The crust of the pie tasted more like a buttery biscuit to Brandy, which she didn't mind in the least, finding it stood up well to the tender brisket, stout scented gravy, and sauted veggies within.  Unlike the cheese on Bailey's sandwich, Brandy could definitely taste the Guinness throughout this dish, which lent an almost coffee like earthiness.  Brandy also loved the simple side of braided and peppered cabbage along with some roasted carrots.  "I'd proudly wear the tartan of any Irishman who presented me with this dish!" Brandy proclaimed. 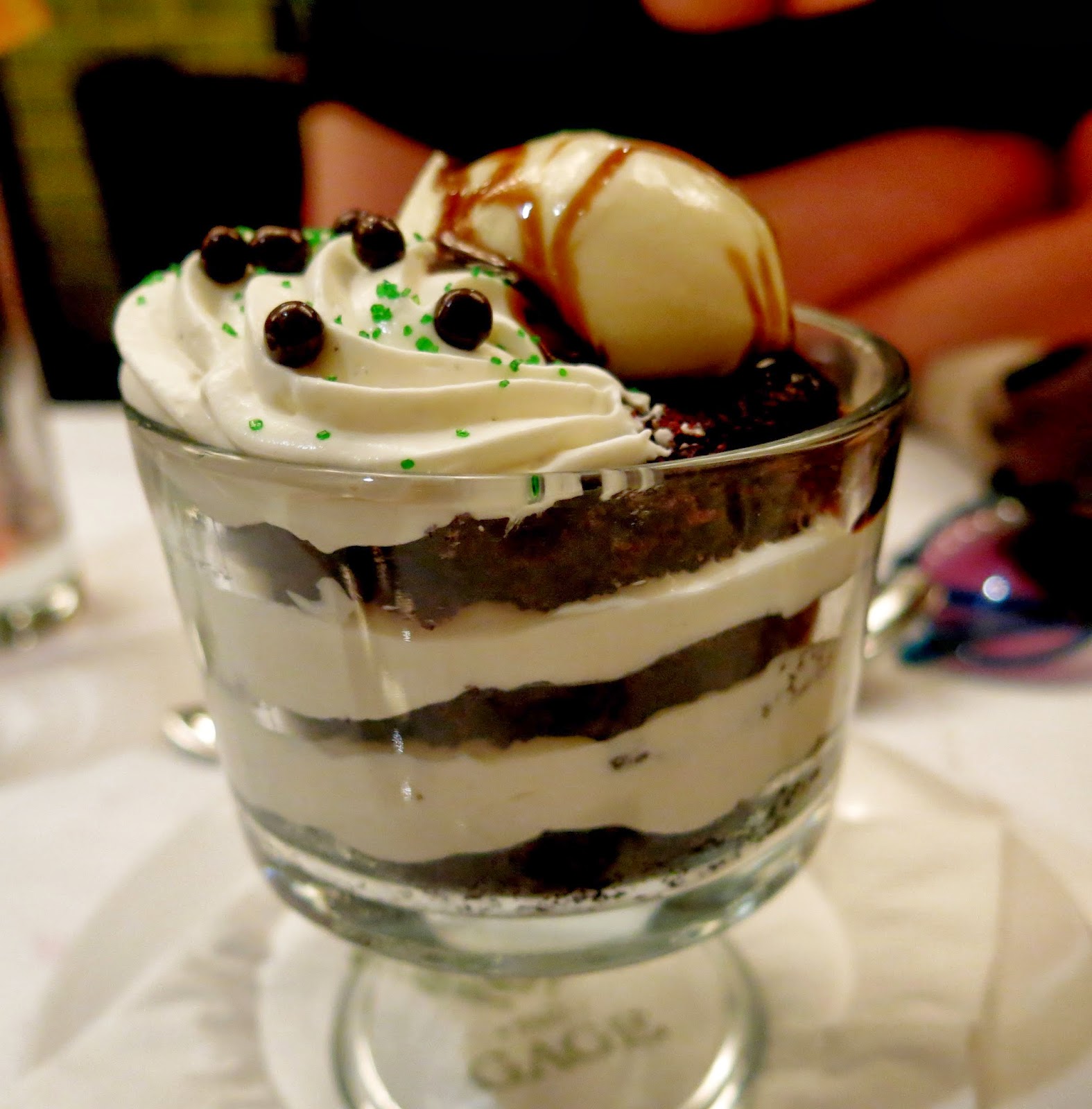 As the Michigan Avenue Parade was in full swing outside, Brandy and Bailey decided to hunker in doors a little while longer and ordered up some dessert and one last round of drinks, namely a flight of Irish whiskies, which they happily sipped and discussed.  The special dessert of the day was something simply called Whiskey and Stout, which turned out to be a sort of parfait ("It's called a trifle, for goodness sake!" Brandy proclaimed) made out of chocolate and Guinness cake, whiskey spiked cream, and Irish cream ice cream on the top.  "I feel woozy after the first bite!" Bailey laughed, though the two glasses of punch and whiskey flight she'd had previous to dessert probably contributed as well.  The cake was beautifully moist and rich, balanced perfectly by the airy cream layers.  Overall, the dessert was certainly decedent, but such a perfect end to a brilliant meal. 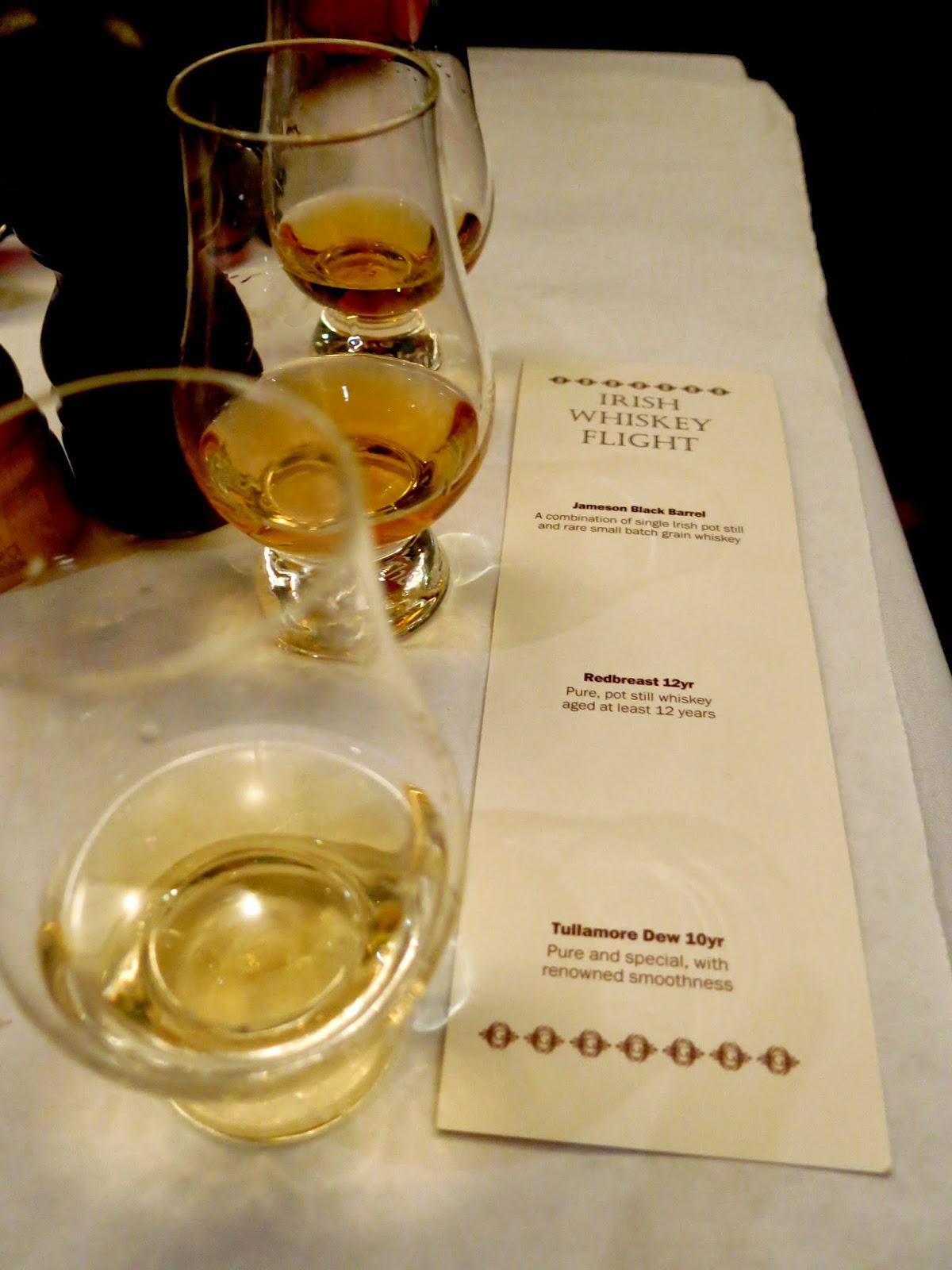 After rising (just barely) from their table and heading for the door, Bailey and Brandy found themselves so in the spirit of the holiday that the green clad rabble at the front bar no longer seemed like advisories to be avoided, but jovial chums to be joined.  It may have been the amazingly efficient and friendly service (an accomplishment worth noting, as St. Patrick's Day is one of the busiest days of the year at The Gage), it may have been the clean hearty flavors of the food, or it may have been the massive amount of booze they'd ingested, but the pair simply couldn't bare to leave the delightful atmosphere of The Gage, so with a mighty yell of "Slainte!" from Brandy, they settled down in front of the the fiddlers and danced the afternoon away. 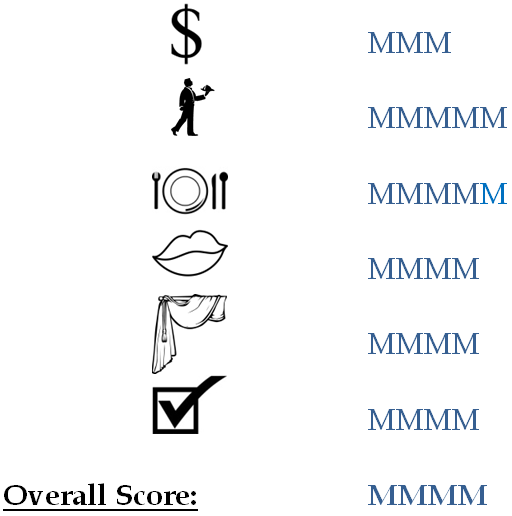