The Publican or The Meeting of the Meats 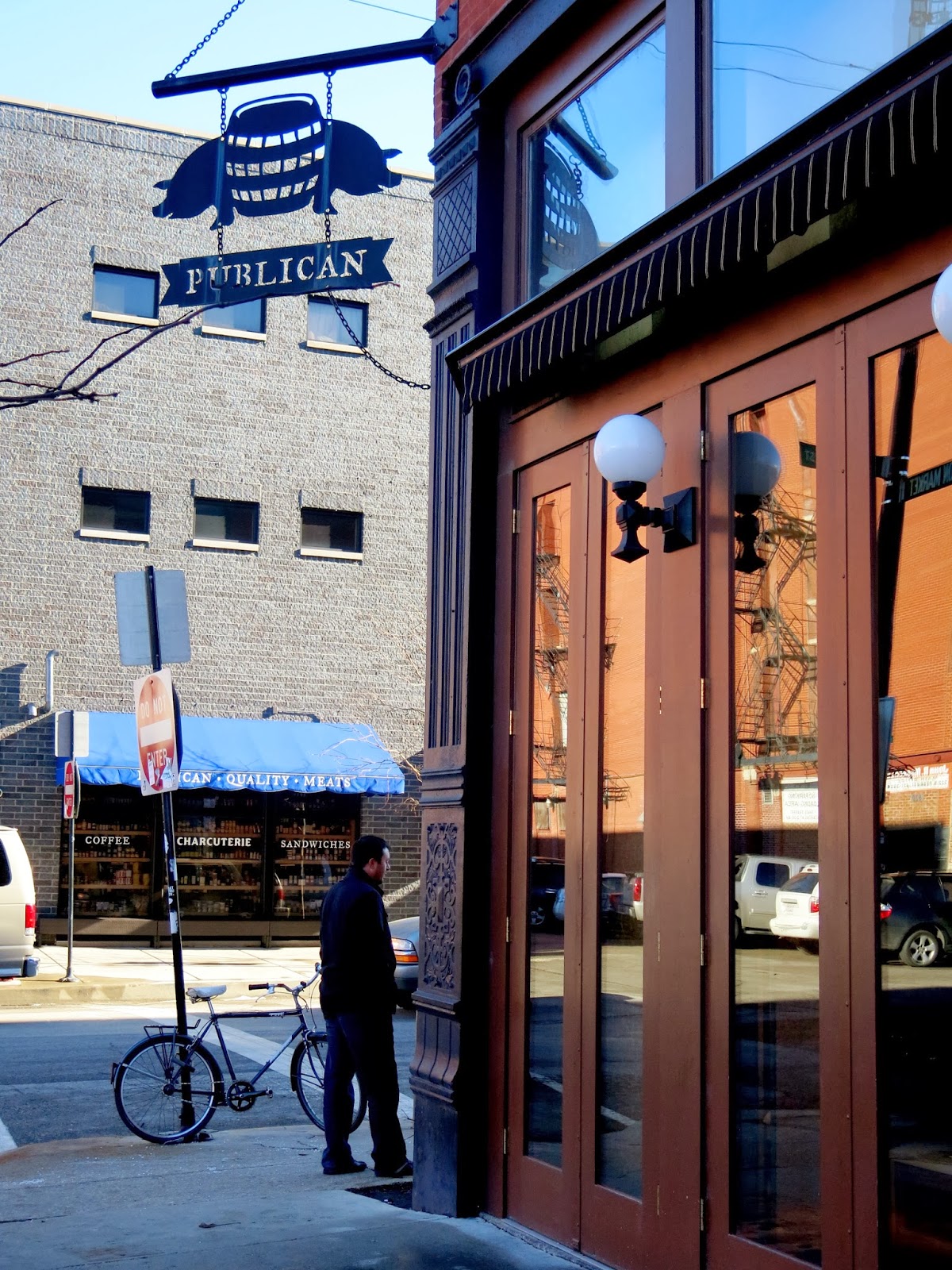 Though Brandy doesn't harbor any moral objection to vegetarianism, she's always felt a deep sadness for those who choose and/or are forced to limit their their ability to be adventurous when it comes to their meals.  "We all know that variety is the spice of life, and spices taste much better on a slab of meat than they do on some wilted spinach or a bed of beet slices," she often says, "I understand that some people don't want to harm animals, and that's fine.  Just don't try to tell me a portabella mushroom tastes as good as a steak.  It tastes good on a steak, but not better than one."

Brandy's current rant against the herbivores of the world started when her good friend Mama Bee told her the story of how she had recently received a request that her honey empire develope a "vegan honey."  "I mean, have you ever heard of such a thing?!" Mama Bee scoffed, "The idea that somehow I could make a better product than my bees can is ridiculous!  If you don't want to use animal products, then use corn syrup for goodness sake!  Honey is a very specific thing, and the second you start tampering with it, its not honey any more!"  "I couldn't agree more," Brandy sighed, "Its like all this catering being done to please the vegetarians.  Fake chicken, fake sausage, fake bacon.  For goodness sake, you just don't desecrate a wonderful thing like bacon with all those chemicals and crazy concoctions!  As a matter of fact, I'd like to see a restaurant that makes no compromises to the vegetarians.  Somewhere that puts its love of meat on display!" 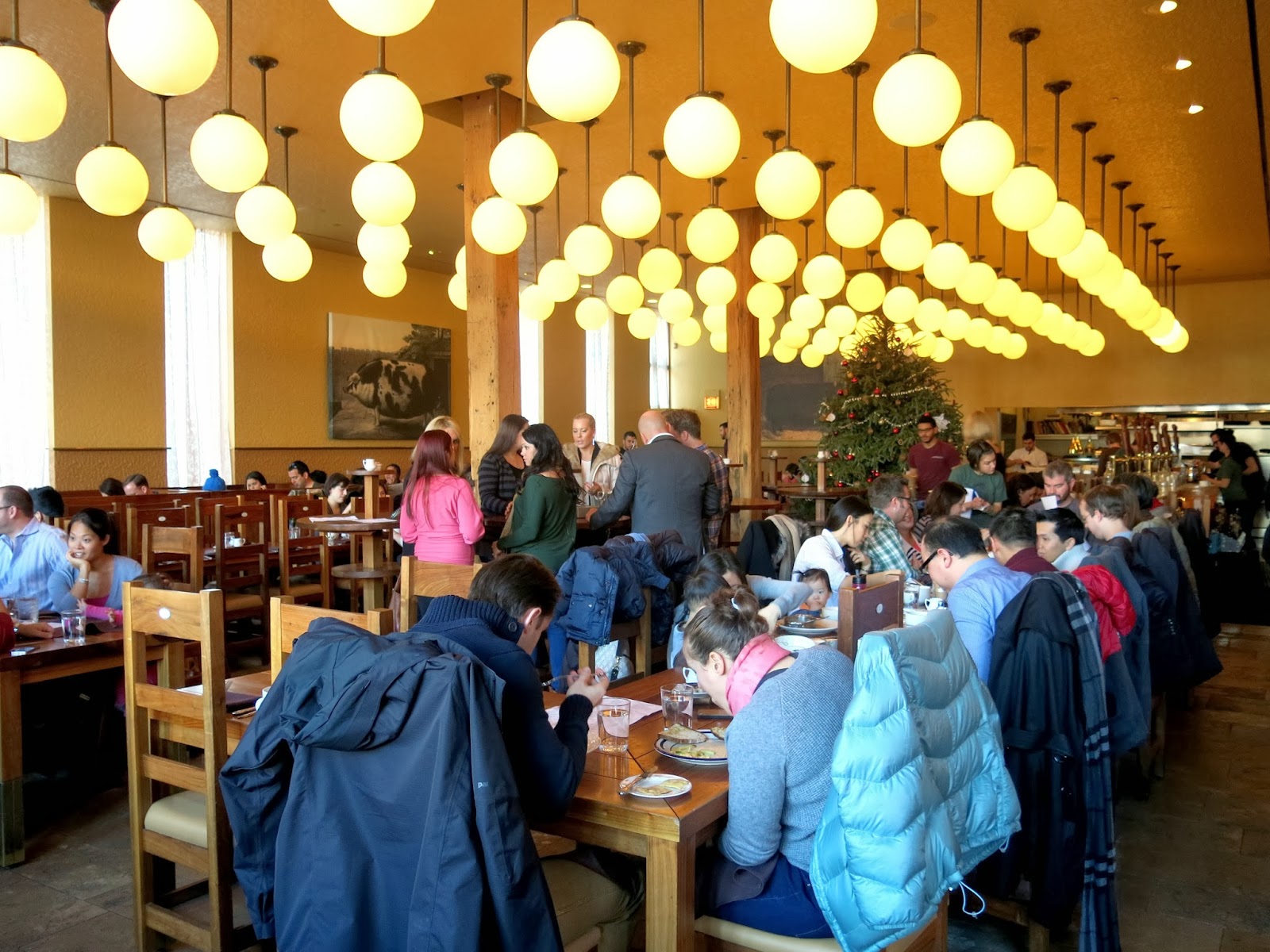 It was decided then that Brandy would take Mama Bee to The Publican, deep in the heart of the meatpacking district on Fulton Market.  The Publican has long been a bastion for Chicago's carnivores, basing its menu on fresh seafood, oysters, and pork dishes.  Upon arrival, the two ladies found the inside to be open and spacious, but with a relaxed feeling not typical of other more highbrow restaurants in the area.  The large windows at the front, where Brandy and Mama Bee were seated, poured sunlight into the mostly warm wood room, creating an inviting dining space, and giant stylized portraits of hogs lined the walls, giving Brandy the feeling of "Being in a restaurant owned by an ex-farmer who'd done well for himself."  . 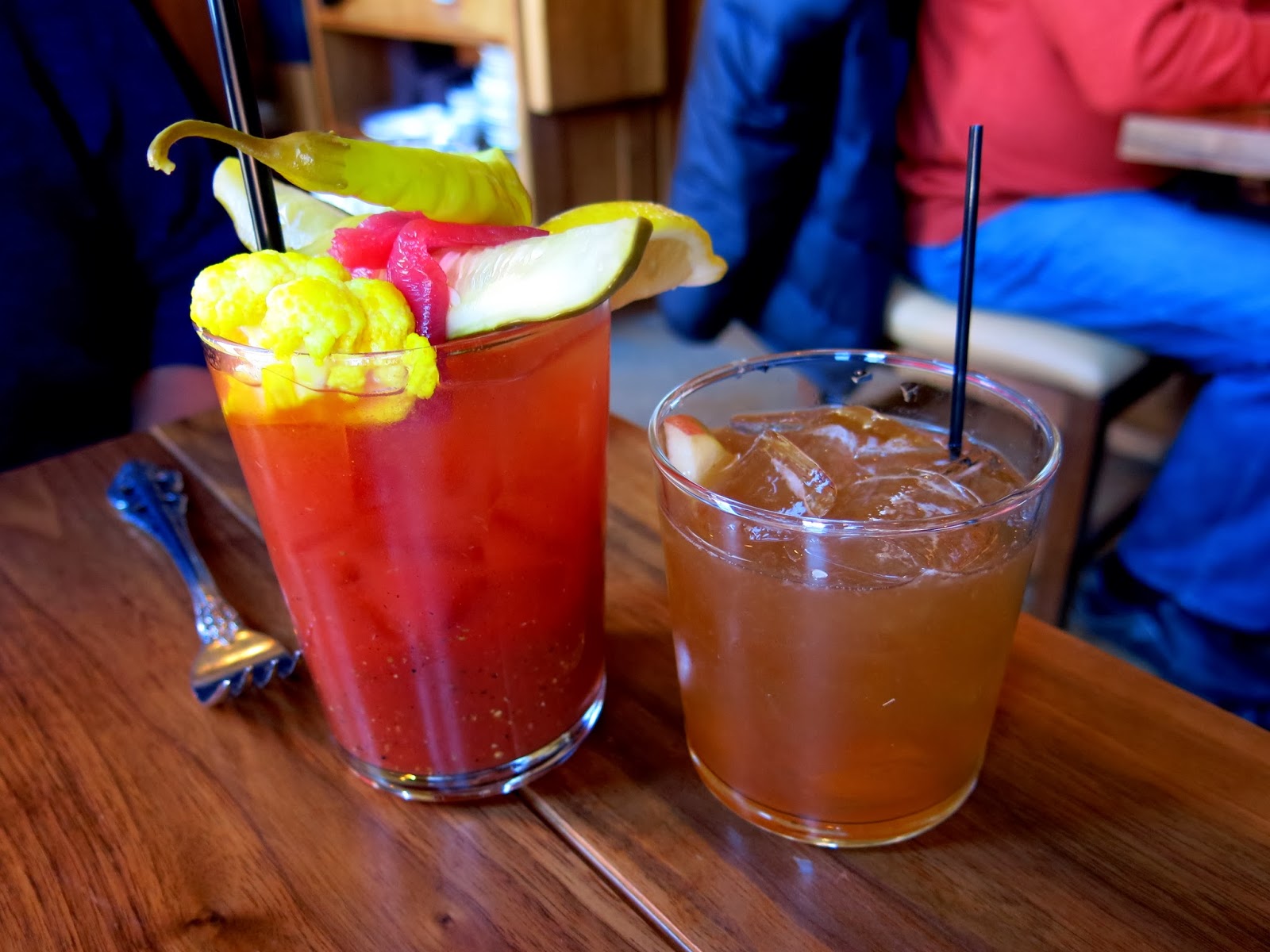 Brandy and Mama Bee started off their morning with a couple of cocktails; a traditional Bloody Mary for Mama Bee and a concoction called the Michael's Virtue for Brandy.  Mama Bee, who was unfamiliar with the tradition of a beer chaser for the Bloody Mary, also chose the Three Floyds Ale from the options on the menu.  The Bloody was pleasantly spicy with an almost sweet tomato base (there was an even spicier option on the menu, causing Mama Bee to wonder what kind of sadomasochist could order such a thing).  "I can see why you need the beer chaser!" she exclaimed, "Otherwise my delicate palate may well burst into flames!"  Brandy's cocktail, the Michael's Virtue, was a zingy mix of apple brandy, bourbon, blackstrap rum, and pumpkin spices.  Brandy actually found it to have quite a sour kick with an almost citrus like flavor and a smooth finish.  "Not quite what I expected, but lovely never the less," she concluded. 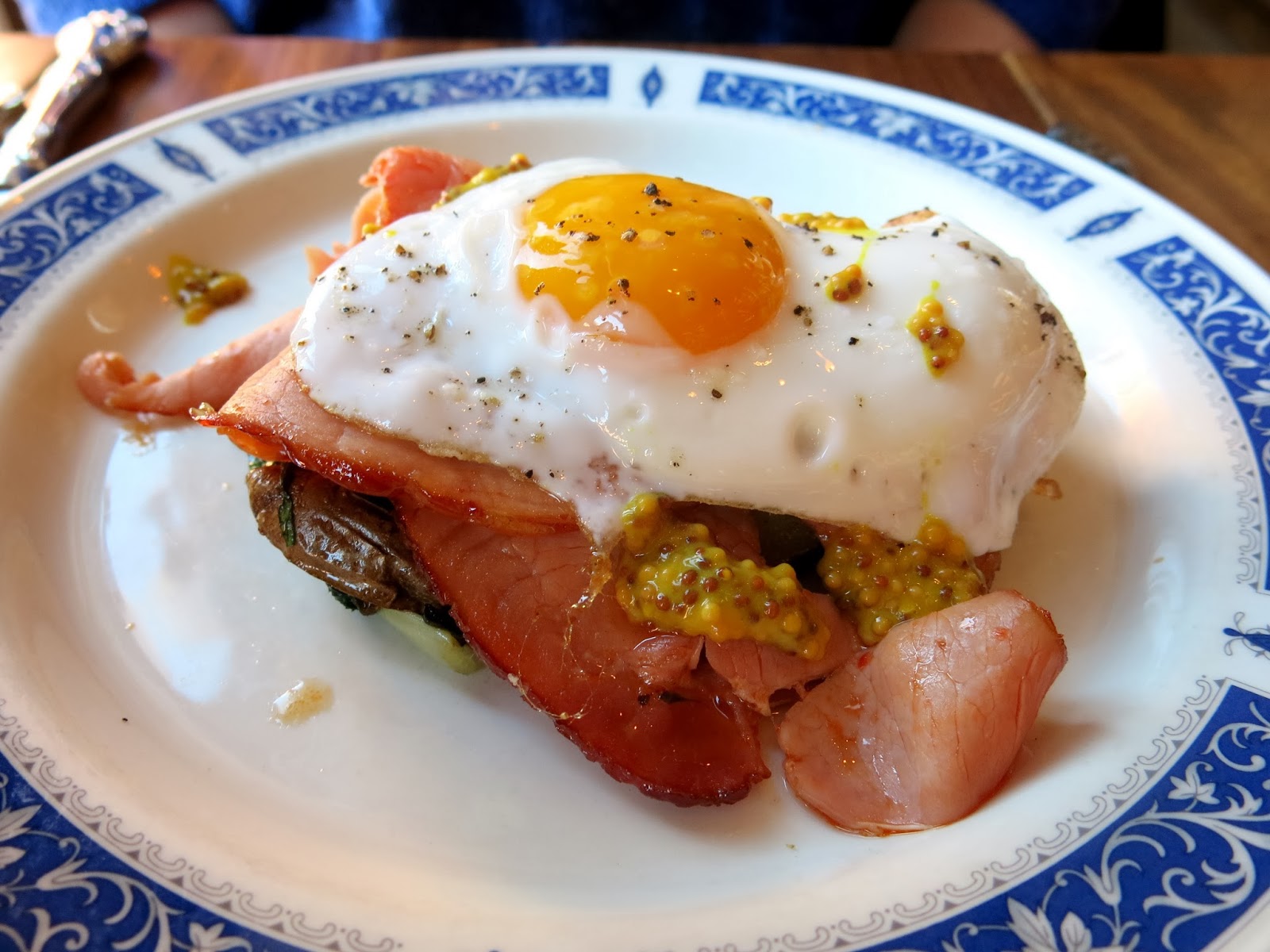 For her entree, Mama Bee zeroed in on the Maple Ham, which came with potatoes, sauteed escarole, cider mustard, and a fried egg.  The ham was fork tender and simply melted on the tongue into a mass of sweet, meaty goodness.  The mustard, which was presented with the seeds ever so slightly cracked, lent a very nice and elegant bite to the dish.  "Normally I do prefer a honey glazed ham, of course," Mama Bee said, "But this plate is really something special.  Like lots of clear, resounding notes adding up to one harmonious chord." 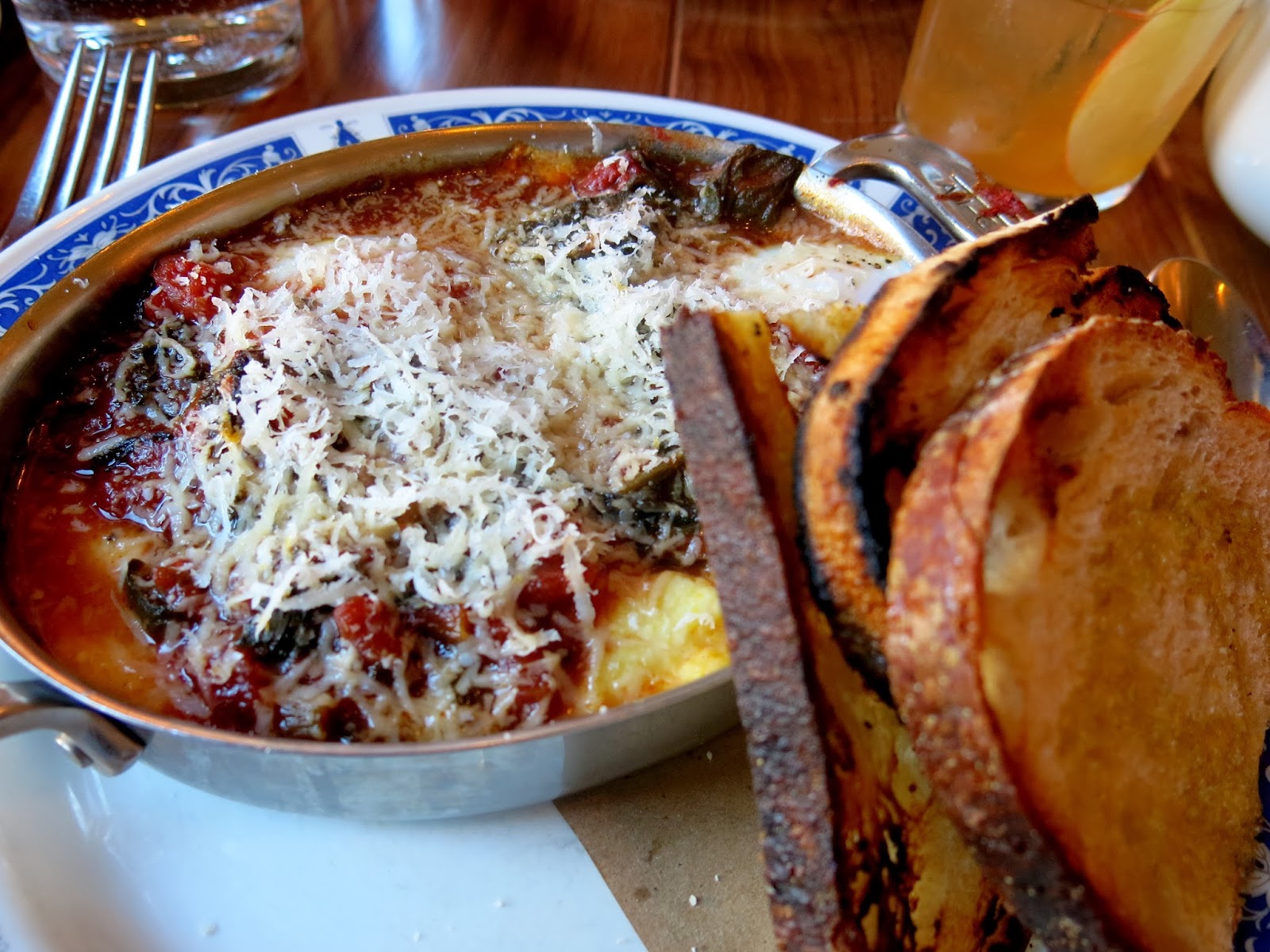 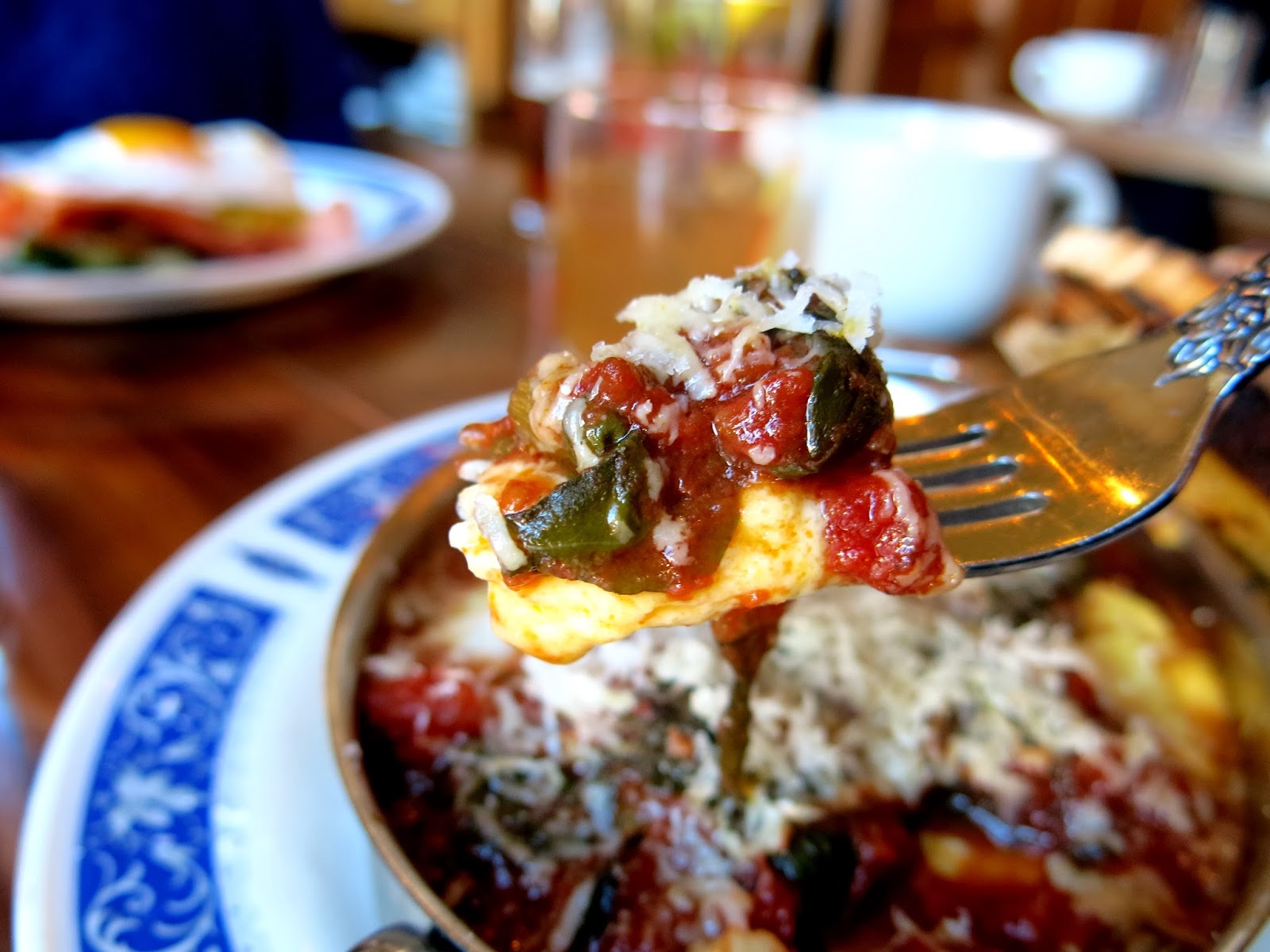 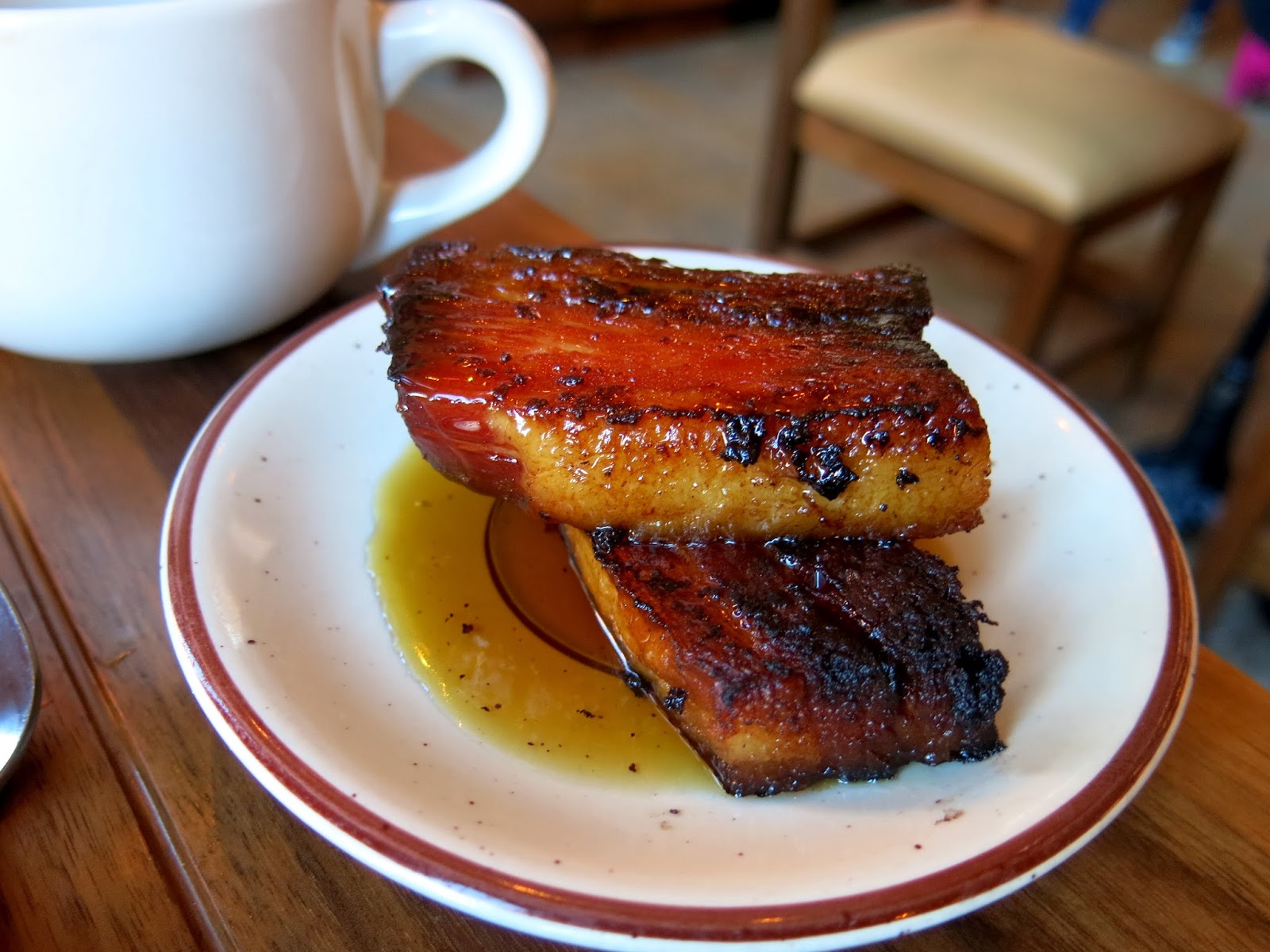 Brandy chose the Baked Polenta as her entree, which came rustically served in an iron pan with some oiled country bread on the side.  There was a great saltiness to the polenta from the parmesan and fontina cheeses, which while plenty gooey, didn't overwhelm the rest of the dish with richness due to the the well balanced acid from the chunks of tomato.  Some swiss chard also helped to add to the heartiness of the dish, contrasting with the melty, soft texture of the polenta itself, which in this instance resembled more of a porridge than grits.  Brandy's favorite part was scooping up heapfulls of the stuff with her toasted bread, wishing she had more of the slices.  Brandy had also ordered a side of the House Bacon, knowing how famous the restaurant is for its self cured and butchered meats (so famous that on the opposite corner to the restaurant is Publican Quality Meats, which delights foodies and chefs with its varieties of exotic meats, home made sausages, and the hand cut chops of yester-year).  The bacon came in two thick blocks, coated in maple syrup.  The meat was fatty, tender, sticky sweet, and crunchy with a beautiful caramelized char on the edges.  "This is no run of the mill bacon," Brandy moaned, "This is the king of bacon.  No, not just the king, the Holy Roman Emperor of bacon.  It should come with a certificate of its lineage." 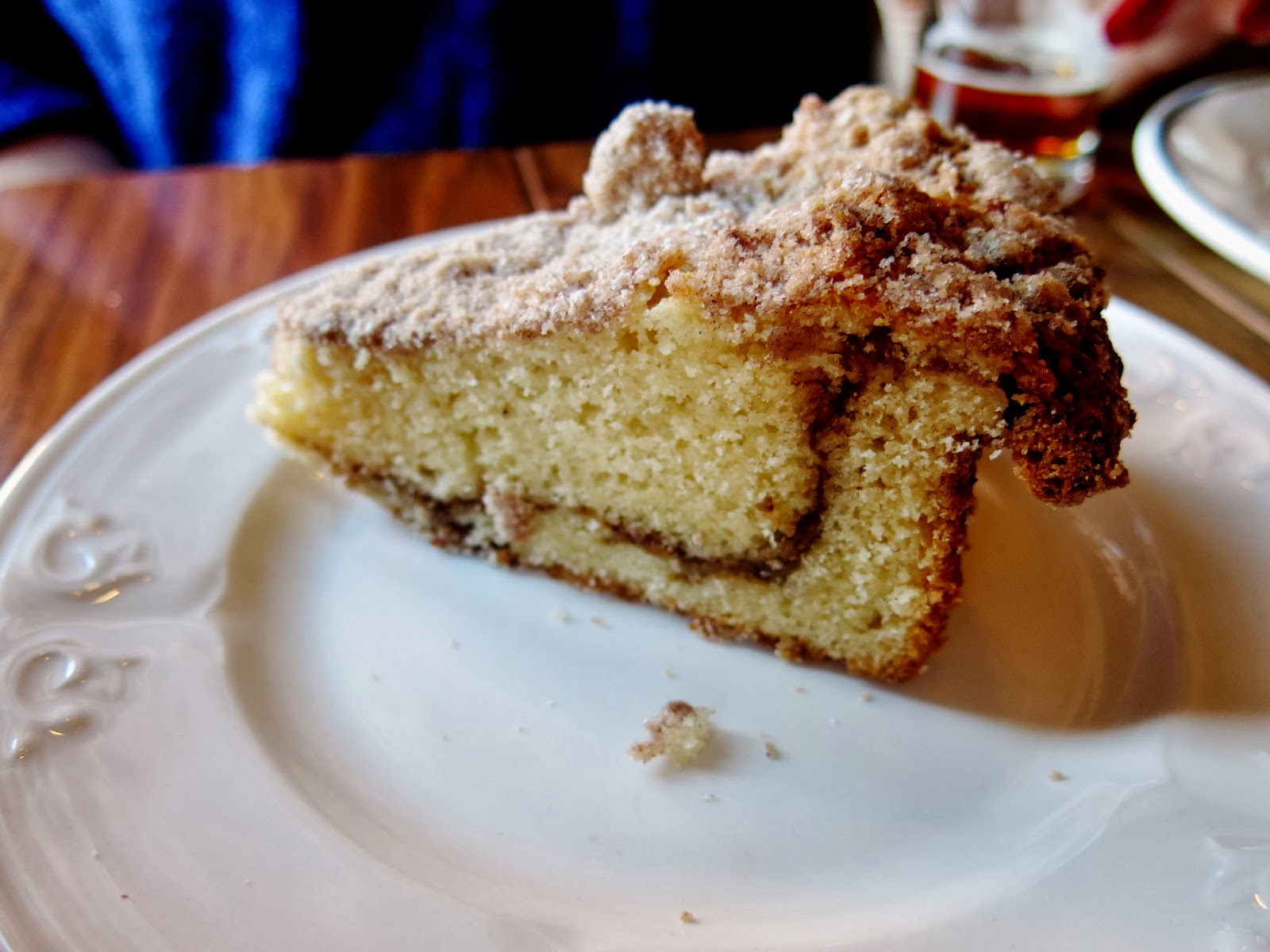 Stuffed as they were, Mama Bee and Brandy decided to sample some dessert.  Mama Bee went with the Cinnamon Streusel Coffee Cake.  The cake was extremely moist, which can sometimes be a downfall of coffee cakes, with a warm vein of cinnamon running through it.  "Its pretty traditional, but done very well, I must say," Mama Bee said cheerily, "Could use a dab of honey though." 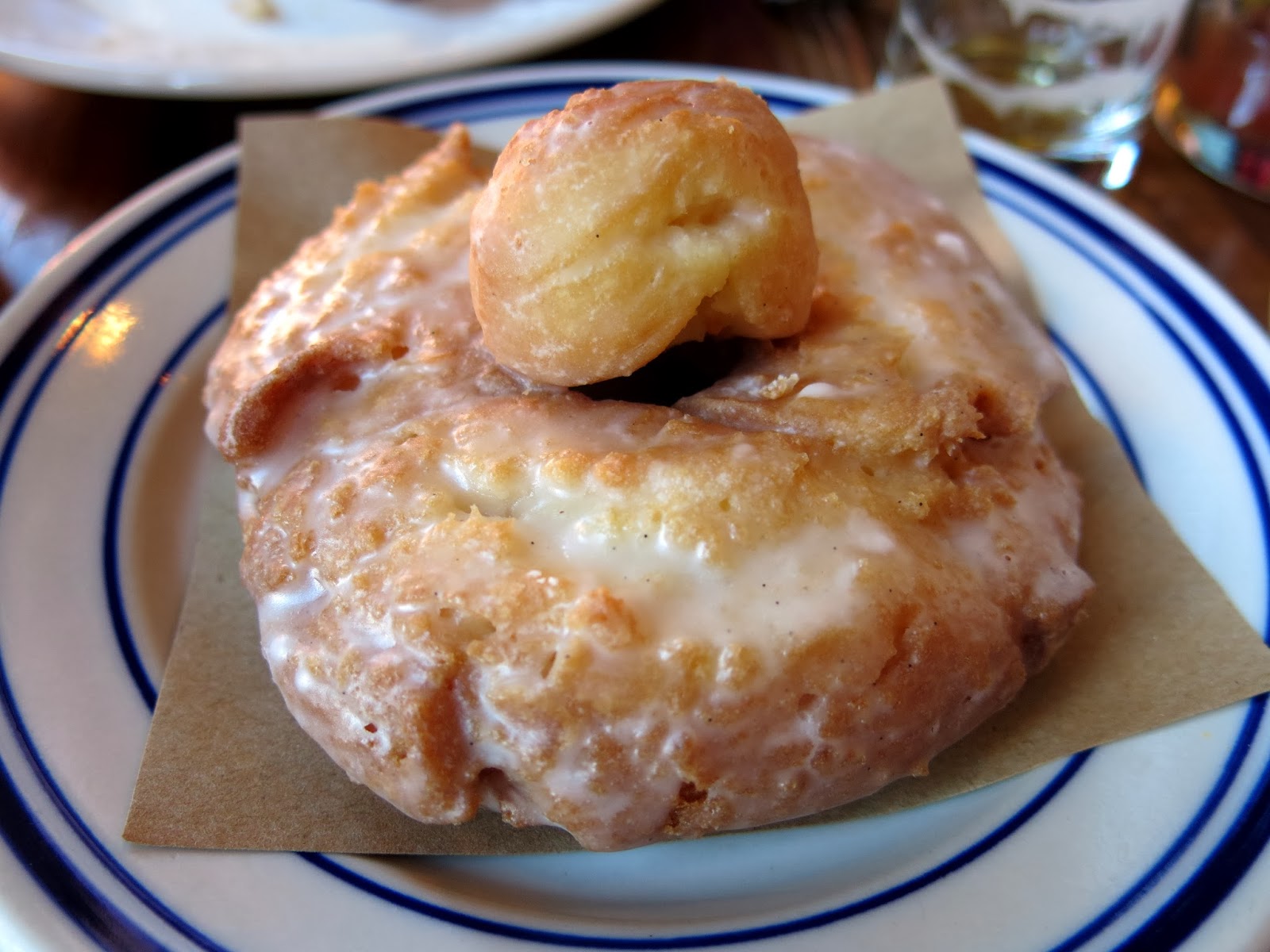 Brandy picked the Old Fashioned Donut for her sweet finish, vaguely surprised that there was no meatier options for dessert.  The donut was also fairly traditional, but done well, with an intense hit of vanilla from the glaze, a melty cake like texture, and a rich, slightly tangy buttermilk flavor.  "The perfect thing for enjoying with a little coffee," Brandy proclaimed, "Could use a chuck of that bacon though."

Having thoroughly proved their point (to no one in particular) that real meat dishes are best kept simple and rustic, Brandy and Mama Bee waddled out of The Publican.  The service had been fairly attentive, though lacked a little friendliness that one might expect from such a relaxed atmosphere, and the prices had been a bit on the steep side, though nothing too outrageous when one took the quality of the dishes into account.  "I'd like to see a vegan version of the meal we just ate!" Brandy proclaimed, "You can alter all the beans, wheat gluten, and ground cashews you'd like, but nothing will ever come close to the glory that was a simple side of bacon." 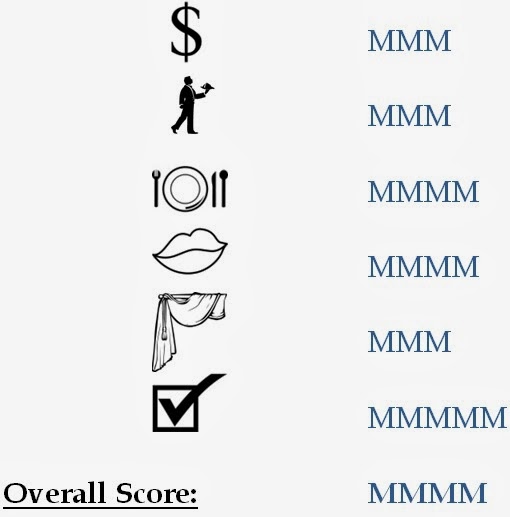 Posted by Bunny and Brandy at 9:58 AM