Wishbone or For the Love of Brunch 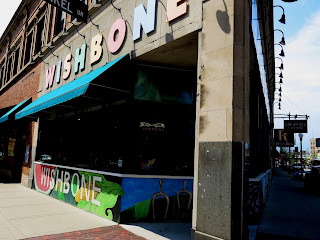 Being from the British Isles originally, its always been a little hard for Brandy to grasp just how many different cultures there are in the United States.  From the accents and dialects, to the climates and foliage,the USA provides a huge variety to choose from, and though there are slight differences from region to region in the UK, Brandy has always felt there were more thing in common than not.  But its the regional foods of the US that have always amazed Brandy the most.  "You people can't even decide as a country on a base for clam chowder!  It's amazing you have a government at all!" she's often vented.

Living in Chicago has introduced Brandy to the pleasures of hot dogs with salad on them and pizza that is more like lasagna, but there is also a more interesting trend in the Midwest culinary world: Southern food for brunch.  "So odd that there seems to be no breakfast traditions in this part of the country," Brandy has wondered, "I suppose that's why they've had to import cuisine from the South to spice things up."  Having now dined at several Southern themed destinations in the past, Brandy has acquired a liking for the food from that particular region, so it was no wonder that she once again found herself craving that particular mix of bold flavors, heat, and good old fashioned hospitality that the South is famous for.  She decided on one of the more popular and well known Southern destinations in Chicago, Wishbone Northside. 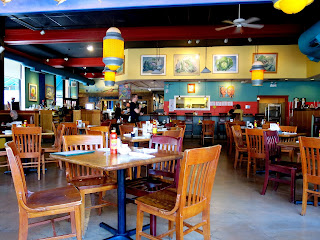 The inside of Wishbone was just as bright and happy as the exterior, with a wide open dining space containing a variety of sitting options.  Brandy couldn't help by smile at the vibrant colors of the walls and the offbeat art work, which mostly consisted of abstract chickens and heads of lettuce.  Brandy was taken to a booth straight away and ordered up some iced tea ("What?  No sweet tea?" Brandy half joked), as to enhance her Southern dining experience. 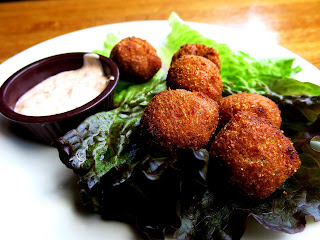 Brandy started off with some Hush Puppies, an old Southern favorite.  The outside of these little puppies was perfectly crunchy, while the inside remained doughy and soft, with a great bit of texture from the cornmeal.  Brandy also loved the level of heat in the spicy mayo that came on the side for dipping.  "It doesn't add heat for heat's sake, but actually enhances the flavors, which is exactly what spice is supposed to do," she mused. 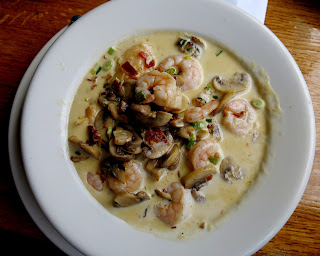 For her main course, Brandy chose the Shrimp and Grits, which came with a freshly baked biscuit on the side. The biscuit was rather nice, and so tender that it crumbled into buttery pieces when she tried to eat it.  Brandy would have liked something special to slather it with, like some honey butter or house made jam, but alas, none was to be found.  As for the grits, Brandy felt they were rather lacking in texture (she likes her grits to be a little more on the firm side) and seemed to be little more than mush at the bottom of a pool of cream.  The shrimp too were not up to par, as they were rather rubbery and flavorless (Brandy was quite sure they were frozen, but it's not as if Chicago has an endless supply of fresh shrimp at its feet, especially at this time of year, so that at least could be forgiven).  While the flavors of the bacon, mushrooms, and green onions were present in the dish, they just weren't quite enough for Brandy's liking, which was a shame, considering how visually appealing the dish was.  "It's like meeting a beautiful man and then realizing he can't carry on a conversation," Brandy sighed, desperately hoping with each bite that she would discover something fresh or some new texture to excite her palate. 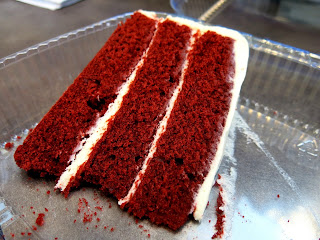 It wasn't until after she had finished her meal that Brandy realized she hadn't had anything sweet.  "It's just not  brunch without sweet and savory!" she exclaimed in a panic.  Luckily, the sweet young waitress advised her of the dessert menu, and as Brandy was already quite full, she decided to take something to go.  When asking about the flavors of pie, one in particular stood out.  "Red Velvet pie?" Brandy asked in disbelief.  The girl nodded and ran off to fetch the confection for her.  But upon closer inspection, the pie looked suspiciously like cake.  Still, Brandy gave it a whirl and found the cake to be fairly traditional.  The crumb was small, creating a smooth texture throughout, but the cake was rather dry and lacked the tell-tale buttermilk tang Brandy has come to expect from a red velvet.  The cream cheese icing was spot on, being just rich and sweet enough without being chalky or sticky.

Though the service was nice enough and the food was decently priced (Brandy's total came out to about $25 even after tax and tip), there was just something lacking about Wishbone that really saddened Brandy.  "Its an odd thing to say, but I felt like I dined at a restaurant today," Brandy explained, "Some places make you feel as though a friend or family member was cooking for you.  Others make you feel like a royal dignitary   More pub like venues have a sense of community and joy.  But this... just felt lukewarm and commercial...  That is just not how Southern food should feel." 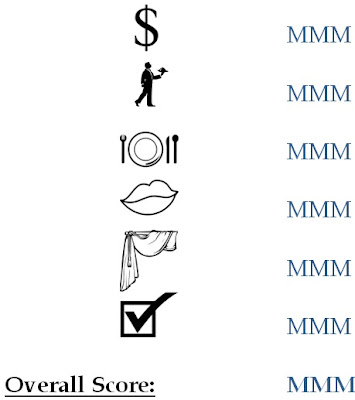 Posted by Bunny and Brandy at 9:22 AM