Stella's Diner or All in the Family 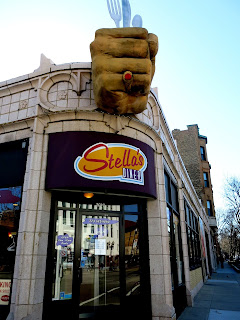 They just don't make diners like they used to.  In days gone by eaters were treated to the delights of home made pie, freshly brewed coffee, and the polite conversation of a sassy waitress from the comfort of their bar stool at the counter or vinyl lined booth, but what with the rise of the gastro pub, the side walk bistro, and the ever popular gourmet coffee bar, it seems the classic diner has been degraded to a place for a greasy late night bite after an evening of binge drinking, or worse, a regional breakfast themed franchise packed with screaming children and grumpy servers.

It was a marathon of 1950's teeny bopper movies that got Brandy all nostalgic for the days of the corner diner.  "There must be a few left out there, " she thought, "Like beautiful old dinosaur bones just waiting to be unearthed."  So she called up her old friend Bailey Blue and proposed an old fashioned diner hunt.  "I want a place that is family owned and operated, a place that has regulars and the waitresses know their orders by heart.  The kind of place that has some outrageously kitschy decoration that would draw your attention from across the street and make you want to find out what exactly is going on inside the building that's sporting it." "Well, there's a diner off Broadway in Lakeview that has a giant plaster fist clutching eating utensils above its door.  Would that do?" Bailey asked thoughtfully.  "Perfect!" Brandy exclaimed. 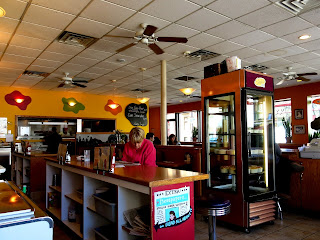 Arriving at Stella's Diner, Bailey and Brandy found a gorgeous bright and open interior, covered in neon colors and blackboard splashes, showcasing various menu items and specials.  They took a booth at the back corner so as to get a clear view for people watching both the room and the sidewalk outside.  Straight away glasses of water were presented with extensive menus, boasting everything from burgers and sandwiches, to pancakes and french toast, to pasta entrees, and even an entire page of desserts. 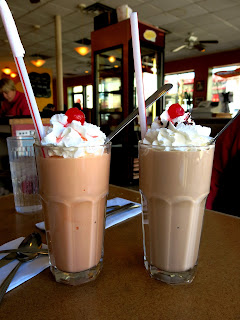 Feeling a little naughty, Bailey decided to start with dessert and order a Maria's Mystery Shake, a combination of chocolate and peanut butter topped with whipped cream and a cherry.  The shake had the perfect texture: not so thick that it couldn't be sipped through a straw, but not so thin that it lost its decadence.  Brandy followed suit with a South Beach Shake, an orange creamsicle flavored treat.  The flavor was a bit lighter than Bailey's shake, but just as delightful. 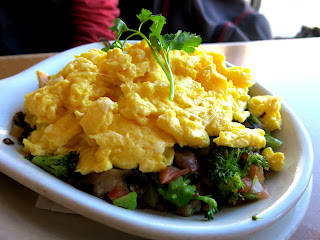 Bailey eyed up the Vegetable Skillet for her entree, but decided to make the addition of some sausage gravy to it.  She found the eggs to have the perfect density; not too hard and not too fluffy.  The veggies still had a good snap to them and the melted cheese was wonderfully gooey.  The only disappointment was the gravy, which was just a bit thin for her taste.  "As a cream of sausage soup, its lovely," Bailey commented, "But as a gravy its a bit lacking." 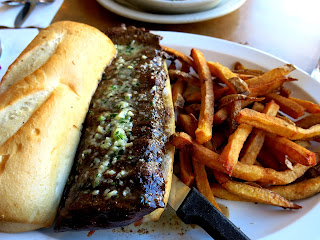 Brandy opted for the Garlic Scallion butter Steak Sandwich and a side of handcut fries.  The fries weren't as crisp as Brandy would have liked, but they were plenty flavorful without being greasy.  The sandwich was pretty darn satisfying with the incredibly flavored butter slathered over the top of the perfectly medium rare steak and soaking into the hearty bread bun.  "I'm going to need a bushel of mint to freshen my breath after this thing," Brandy joked.  There was also a small cup of creamy cole slaw and some vegetable offerings for the sandwich on the plate, which Brandy only discovered after devouring the sandwich.  "Do you want your salad to go?" the waitress had joked as the dish was removed.

But the real highlight at Stella's was the service.  The waitresses seemed to know everyone who walked in the door by name, and a few were even brought orders without even having to look at a menu.  And then there was Gus, the owner and patriarch of the operation, who gloried in conversing with guests like they had dropped into his home for a visit and a quick meal.  After noticing Brandy scribbling away on her note pad, he approached her, asking, "Hey writer lady, how do you spell 'precision?'"  After that it was story after story about the gloriously weird antics of his patrons, which Gus felt was more fostered by the diner atmosphere than the surrounding eccentric neighborhood.  He even offered Bailey some business advice on how to start selling some of her original art.

Stella's was just what the doctor ordered: inexpensive, great food, happy atmosphere, and wonderful company, just like the diners of old.  "I'm glad they haven't all died off," Brandy sighed as she and Bailey gazed fondly up at the giant plaster fist, "Just as long as this little jewel doesn't spawn fifty more just like it across the Midwest, I'd be happy to become a regular here." 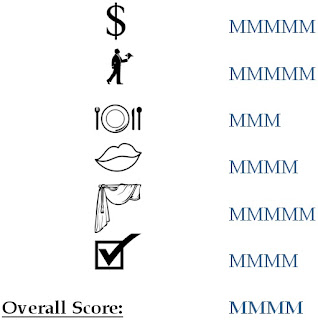