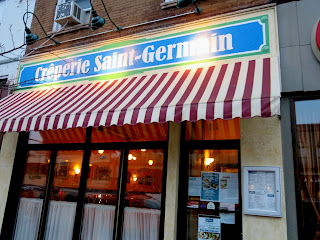 Brandy has always preferred the hustle and bustle, the neighborhood culture, and the accessibility of living in the big city.  Having also lived in suburbs around the world, she finds them too quiet, too sprawling, and just too, well, normal to stay in for long.  So it is unsurprising that ever since moving to Chicago, Brandy has had little occasion (or interest, to be honest) in exploring the suburbs.  "I moved here to get a taste of city life, not suburban normalcy," she says, "If I wanted the suburbs, I'd watch a David Lynch movie." 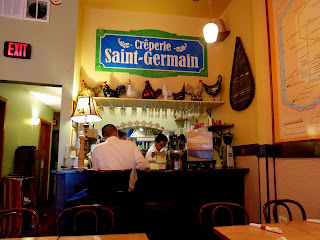 This is maybe why it was so surprising to her when one of her most fashionable friends, Baranina, world famous Polish pop star, called her up one day and invited her to brunch in Evanston.  "I've been stuck in a hotel here while my private jet is fixed and I've been exploring the area.  I think there's some things you're missing out on," she told Brandy.  Loath to miss the short window of time her friend was in the area, Brandy relented and met the young singer for a bit of a wander about.  Brandy immediately had her big city nose in the air, looking at the all of the chain stores along Sherman Avenue.  "But they have most of these stores in downtown Chicago, don't they?" Baranina asked.  "Yes, but they aren't so... conventional."  Conversation soon turned to European travel, as which Brandy cheered greatly.  "I do miss Paris," she sighed, "Especially the creperies."  "Isn't that a creperie over there?" Baranina pointed out.  Brandy raised an eyebrow and crossed the street in great interest to Creperie Saint Germain. 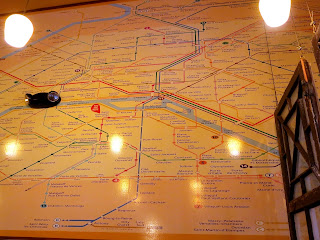 Upon entering, the two ladies found a small but quaint restaurant with dim lighting and a giant map of the Paris subway system on the right hand wall.  A cheerful server approached them straight away with menus and water glasses, letting them know that all of the entrees served were made with delicate organic buckwheat crepes. The ladies took their time browsing the menu and in the end, decided on sharing a few dishes that sounded too delicious to be eaten alone. 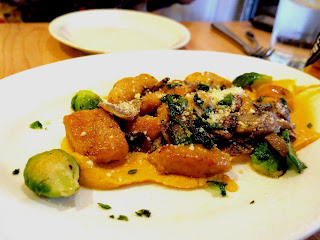 They started off with some Sweet Potato Gnocci, a plate of brilliant orange dumplings, mushrooms, and brussel sprouts served over a butternut squash puree and topped with Parmesan cheese.  The warming dish in front of them was the perfect counterpart to the gloomy day outside, combining traditionally fall flavors (Brandy's favorites) and textures.  The mushrooms were thinly sliced and succulent, the brussel sprouts crisp and flavorful, and the gnocci had a delightfully irregular shape and chewy texture. 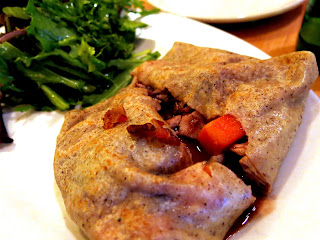 Next they picked the Coq Au Van Crepe, a traditional stew like French dish with chicken and vegetables, cooked with red wine and herbs.  The buckwheat crepe, was incredibly thin and delicate, had a brilliant earthy flavor that matched perfectly with the rich filling.  Though the chicken was a little on the dry side, the vibrant gravy did wonders for it, and the vegetables had somehow retained some of their textural integrity. 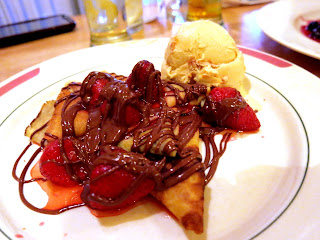 The desserts were too diverse and delicious sounding to share, so each lady got their own.  Baranina sided with the Nutella Crepe, which she customized with strawberry preserves and a scoop of Dulce De Leche ice cream.  The dessert crepe, which was made with organic wheat flour as opposed to the buckwheat savory crepes, was just as beautifully thin, but this time a little more chewy and with perfectly caramelized edges.  The hazelnut cream that was drizzled over the top was countered nicely by the bright berries and the ice cream made it all that much more decedent. 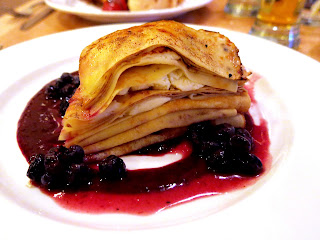 Brandy went with something called The Myrtille,a slice of layered crepes sandwiching rich mascarpone cheese and topped with blueberry coulis.  Brandy really loved the juicy pop of the berries along with the creamy sweetened cheese and slightly chewy crepes.  "It's almost like a cake, but an incredibly delicate cake made from the interior buttery layers of a croissant!" was the only way Brandy could describe the dish.

After all was said and done, Brandy was really quite impressed with the authentic French culture she found in the suburban paradise that is Evanston, and without big city inflation, her meal with Baranina (one appetizer, one entree, two desserts, and two bottled ciders) came out to about $50 in all.  "I may enjoy the sophistication of Paris and the convenience of Chicago," Brandy relented at last, "But I suppose there is something to be said for the quiet freedom of the suburbs." 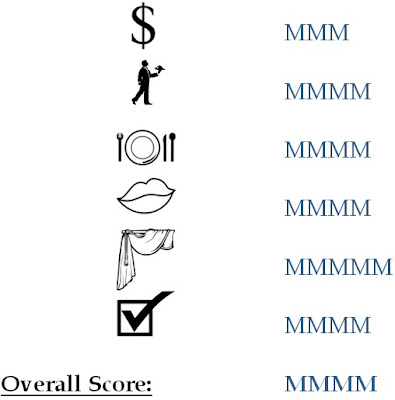 Posted by Bunny and Brandy at 7:47 PM