There is a saying in the world of theater: "A bad dress rehearsal means a perfect opening night."  Its a thing that many a harried director clings to as he watches set pieces falling down around his actors and knows there is nothing he can do about it, except for praying to every deity in existence that the nails will hold up the following night.  Usually everything turns out just fine, but on occasion, there is a disaster so horrible that it can not only end the run of the show, but a few careers as well. 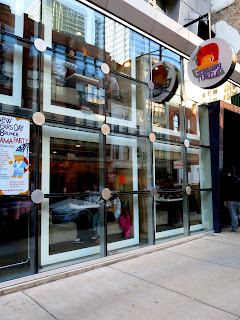 A director friend once asked Brandy to sit in on a preview for a show so disastrous that not only were the jobs of the actors under threat, but their lives were as well.  It was a musical based on the life of Sigmund Freud (Brandy had been invited to give her opinion as she once dated Dr. Freud, but claimed he was a bit too much of a "mama's boy" for her liking) and the big show stopping number at the end of the first act was a song called "Do The Freudian Slip," which included an incredibly complicated dance number in which all of the bright faced chorus boys and show girls would literally slip into each other repeatedly, launching prat fall after prat fall onto the stage and causing the floor boards to creak ominously below them as they landed.  Eventually the dainty figure who was playing the main role of Dr. Freud's secretary, a fresh faced ingenue by the name of Bambi Buttercup, threatened to walk out of the show when she was almost tossed into the orchestra pit by a sliding kick line.  Taking initiative, Brandy met the young woman in her dressing room back stage and offered her this sage advice, "Get out while you still have all your limbs intact."  Bambi promptly quit the show and spared herself the fate of her replacement, who broke both legs during the first week of the production.  Needless to say, Bambi kept in close contact with Brandy after that, calling to consult with her on various career moves throughout the years. 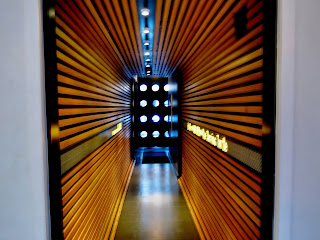 Brandy was delighted when Buttercup phoned her one day to let know that she and her manager husband, Bear, would be coming into Chicago for New Year's Day.  "I'm currently touring through the Midwest with Andrew Lloyd Webber's new show," (Brandy later found out this show was Evita 2: Go Ahead and Cry Argentina) "And we would love to see you!"  "Of course!  I've got plans with some friends to go to brunch that day, but you are both welcome to come along.  It should be a spectacular one," Brandy said.  "Oh now," Bambi scolded her, "Don't tempt the gods like that!" 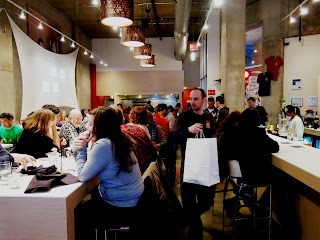 Brandy gathered together with Bambi and Bear, as well as her dear friends Bailey and Hawke, at Slurping Turtle, the latest venture from one of her favorite Chicago chefs, Takashi Yagihashi (he had actually recommended she stop by when Bunny interviewed him last summer).  Her expectations were admittedly pretty high, seeing as how Takashi had been one of her all time favorite brunches.  Slurping Turtle has only recently begun serving brunch on Sundays, but were open for a special brunch on New Year's Day, promising a free order of Donut Holes and a gift certificate for 50% of the total bill to anyone who showed up in their pajamas.  Brandy had come full out in her tartan night gown, lace sleeping cap, and lamb's wool slippers, while Bailey and Hawke sported matching flannel sets that had been embroidered with a woodchuck motif.  Bambi had some how managed to still look like the starlet she was, draped in a silken bathrobe with a feathered collar, but her husband had taken some convincing, as he normally didn't like to step out the door in anything that wasn't a three piece suit. 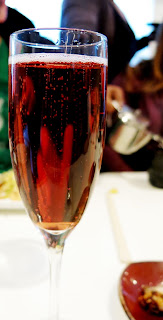 The restaurant was surprisingly busy, forcing the group to wait for about 30 minutes before being seated.  They were taken to a somewhat narrow table, which was shared by another party of 3 rather territorial people.  Though the entire staff of the restaurant was also wearing their pajamas (a stark contrast to the ultra modern, industrial chic interior) their hearts did not seem to be in the spirit of the thing, rushing in and out of tight spaces with dower faces, avoiding eye contact with every patron.  Brandy couldn't really blame them, as chaos seemed to be reining everywhere, even on the menus, as the party had been provided with two different sets of them and no one could figure out which one held the actual items available. 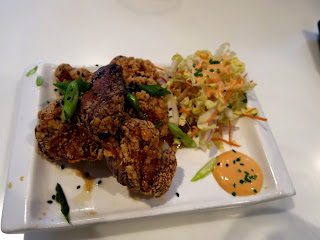 Brandy started herself off with a Kir Royale Mimosa, a rather syrupy concoction with no garnish to even attempt to justify the $10 price tag.  Bear ordered himself a plate of chef Takashi's famous Duck Fat Fried Chicken, which immediately put him in a better mood.  Moist on the inside, crispy outside, nice sweet sauce, and a spicy Asian slaw on the side meant a good mixture of flavors and textures to snack on as the group waited for their entrees.  And waited they did. 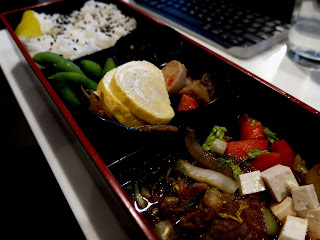 Brandy was rather surprisingly supplied with her entree quite quickly, but no one else's seemed to be forth coming, so at their urging, she started to dig in.  Brandy had ordered one of the signature Bento Boxes, the house brunch specialty of Slurping Turtle that distinguished it over its sister restaurant.  Brandy's variety contained some pickled daikon radish, edamame, sesame rice, marinated black mushrooms, two slices of tamago (rolled, sweet egg) an unexplained cup of various vegetation, and some beef short rib with tofu.  The presentation immediately seemed off to Brandy, as several of the selections had been dished into plastic cups and shoved into the bento box.  "I've seen more delicately plated bento boxes at all you can eat sushi restaurants.  Very strange indeed," Brandy mused.  While the various vegetable sides were pleasant enough (Brandy found them mostly crisp and flavorful) the rib eye was down right disappointing.  Sliced thinly, it was plenty tender, but very dry, and without the flavorfully sweet broth that it sat it, it would have also been flavorless.  With a hefty price of $18, Brandy was very surprised indeed at the quality of the dish. 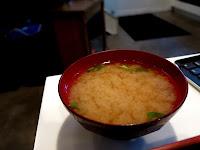 Her bento box also came with a small bowl of Miso soup, which was brought to the table after her entree, but before everyone else's, and without a spoon with which to consume it.  Once a spoon had been aquaired, Brandy and Bambi (who had also ordered a bento box) dove into their soups with gusto.  They found the soup to be quite rich and deep in flavor without being too heavy or salty, as miso can sometimes be. 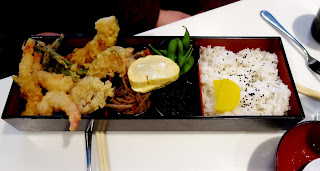 A bit later, entrees began to arrive for the rest of the table.  Bambi, who had ordered a Temura Bento Box, also found hers to be a bit of a let down.  The tempura was crisp, but bland, and surprisingly included chicken, although it had been labeled as "shrimp and vegetables."  Normally this oversight would be excusable, but Bambi, being a pescitarian, was rather saddened by the discovery of the chicken, as it could have easily been mistaken for something else by being hidden in the tempura batter.  The rest of her sides were the same as Brandy's: she rather liked the tamago, but found the texture of the mushrooms to be a bit too rubbery. 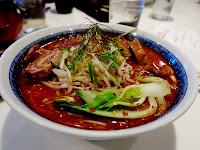 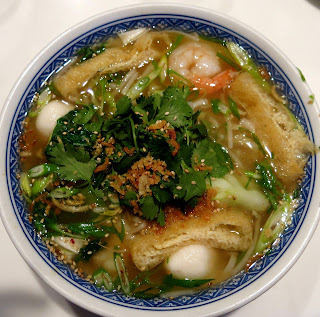 The other three had ordered a variety of noodle bowls: the Miso Ramen for Hawke, The Slurping Noodle for Bailey, and the Tonkotsu for Bear.  Having previously had chef Takashi's noodle bowls, Brandy soon became jealous of her cohorts' choices, covetously starring down the generous portions of noodles while the others ate.  Bear found his bowl fairly flavorful, especially the braised pork shoulder, but didn't think the dish anything special.  Bailey's bowl was nicely earthy with a good hit of cilantro to brighten things up.  But the decided winner was Hawke's bowl, which had a wonderful spice to the broth that reminded Bailey of a jambalaya. 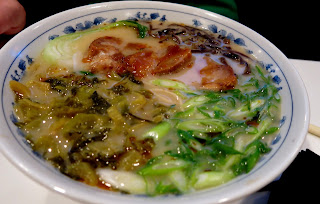 Having over heard Brandy's grumbling about her bento box, their waitress sent over a manager who seemed to earnestly want to make things up.  "Tell you what.  I'll go ahead and take the bento box off the bill, and then I'll have the pastry chef send over something special  How does that sound?"  Brandy agreed to the plan, now feeling better about taking all of her friends to such a chaotic brunch.  The dessert sent over turned out to be five of the house made Macaroons, flavored in Caramel Soy, Yuzu, Chocolate Sesame, and Raspberry Wasabi.  The Raspberry Wasabi was a bit of a disappointment, in that one could only really taste the fruity jam and none of the expected heat.  As far as favorites were concerned, the table was split between the salty goodness of the Caramel Soy and the richness of the Chocolate Sesame. 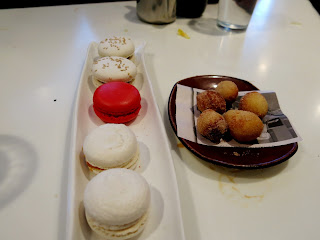 At last, the table was presented with what was to be their reward for coming in their pajamas, but the Cinnamon Sugar Brioche Donut Holes were probably the biggest let down of all.  One tiny fritter was given to each of them, rather like a plate of mints, with the bill.  The party of five rang up a total of about $90 (that was without Brandy's bento box, but did include the macaroons, which Brandy had expected to be comped) and they were given a $50 gift card, as per the second part of the promotion.  Brandy handed the card to Bailey and Hawke, feeling so disappointed by what she had expected to be a spectacular brunch that she really had no interest in ever returning.  "Look at it this way," Bambi said, trying to cheer her up, "Maybe this is just their dress rehearsal.  Some day, they are going to have a really brilliant opening night."  "I hope so," Brandy sighed, "Otherwise they may just find themselves slipping into the orchestra pit." 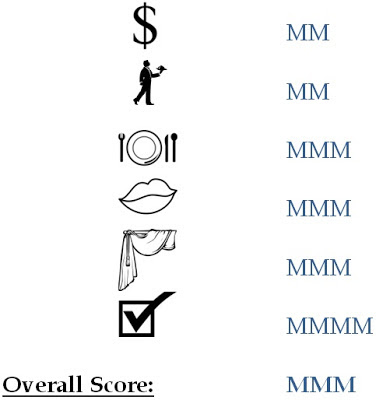