The Monkey's Paw or Perfectly Primative 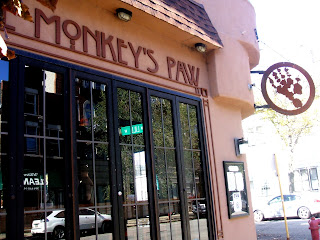 Its funny how some of us can become slaves to our electronic devices.  The portable music device breaks and we suddenly forget how to use a CD player.  The streaming television service stops working and we suddenly have nothing to watch.  The e-reader breaks down and we suddenly forget what a real book looks like.  Brandy had always prided herself on keeping her old ways, to a certain extent.  Yes, she does own a cell phone, but not one of those new fangled smart phones.  "I don't need to own anything that's better informed than I am," she always says.  And as for the portable music? "Have gramophone will travel," is her motto.  But there is one temptation Brandy had given in to; the almighty tablet.  Now in fact, she actually owns this item for our benefit, because, you see, she mainly uses it for making notes on her brunch adventures, from which we compile these reviews.  Unfortunately, Brandy's tablet came into a bit of a misadventure with the edge of a very pointy table one day, shattering its perfect screen and leaving Brandy to take notes the old fashioned way, in an ancient and battered notebook. 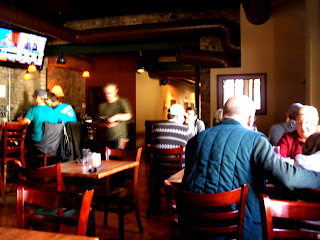 It was with this very note book that Brandy wandered into The Monkey's Paw, a charming little corner bar in Lincoln Park.  Though the staff looked up at her and smiled as she entered, no one offered to take her to a seat, which Brandy took to mean she should find her own.  She settled into one of the rustic looking wooden tables, spreading out her old notebook, deluxe fountain pen, ink well, blotter, and a selection of various brass nibs, just in case.  Looking around, she felt the warmth of the wood around her, from the heavily lacquered bar to the high shelves at the back, which held everything from antique looking jars to a obligatory toy monkey.  The music playing gave the room a sort of Celtic country vibe, which Brandy greatly enjoyed. 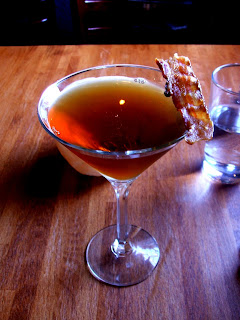 After a little while, a nice young man came over to take Brandy's drink order.  One particular concoction did peak her interest; the Smokey Maple Manhattan, severed with a piece of bacon on the side.  The drink was nicely sharp and strong with just a little sweetness from the maple syrup, and the meaty bacon matched the smokiness perfectly. 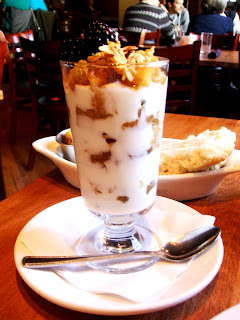 To start off her brunch, Brandy ordered a Yogurt Parfait made with house made granola and seasonal fruit, which in this case turned out to be apple compote and a few fresh blackberries.  The granola provided a nice crunch without being too hard and the apples were soft and sweet. 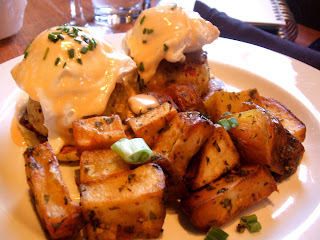 For her main course, Brandy eyed up the Jonah Crab Cake Benedict.  While its true that Brandy has seen quite a few crab cake benedicts in her time, she had never seen one quite like this, coming adorned with a smoked tomato hollendais and chive belinis in place of the more traditional (and heavy) English muffins.  Upon cutting into her eggs, Brandy was saddened to not see a heavenly cascade of yolky goodness.  The eggs were still velvety, but a little too firm, and the yolks had solidified to the point of being almost hard boiled.  The hollendais might have been too subtle for Brandy's palate, as she didn't seem to detect any of the supposed roasted tomato flavor, but the belinis did make for a nice change of pace.  As for the crab cakes, Brandy found them tasty enough, but sadly lacking any crunch.  Brandy had also ordered a side of grits, which seemed to have been replaced with potatoes.  Glancing over her notes to try and remember if she really had decided on the grits, she soon gave up trying to decipher her own hideous handwriting and tried the potatoes.  She found them a tad bit dry, but very flavorful, with a nice snap to their exterior. 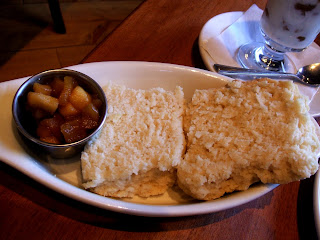 To finish off her rustic meal, Brandy ordered one of the house made Buttermilk Biscuits, which came with a bit of the same apple compote, but oddly no butter.  The biscuit was rather huge; indeed, one side would have served as a good portion by itself.  Brandy found it to be very moist and crumbly with a little bit of a salty hit on the tongue that matched well with the sweetness of the apples (Brandy would have preferred something she could have more easily spread on the biscuit, but there was no denying the two did taste perfect together).

As she sipped the last of her cocktail, one of the genuinely friendly servers approached her table to clear away some dishes.  "I'm a little jealous of your Sunday morning setup," he said to her with a grin.  Brandy looked up at him from her ink splotched notes.  "Pardon me?" she said.  "A little whiskey, a little journaling, a little breakfast.  Not a bad way to spend a Sunday morning," the young fellow said as he wiped the table clean.  Brandy glanced down at her stationary set and smiled a little.  "You know?  You're right, young man. Not bad at all," she said, downing the last of her drink and handing him the empty glass.  Leaving just about $40 to cover her bill and tip (Brandy felt the food fairly priced, the at $12, the cocktail was a bit more on the expensive side) Brandy once again headed out into the sunny streets, suddenly not at all anxious to retrieve her treasured tablet. 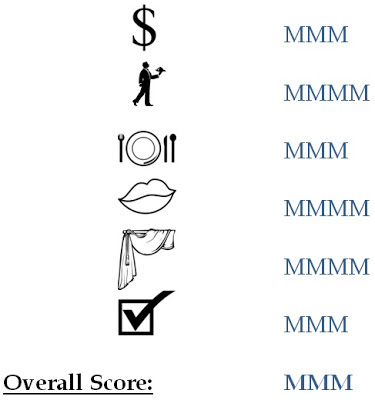