And now for something a little different... 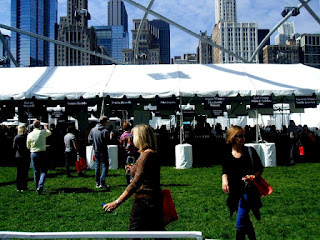 This past weekend, Brandy forewent her usual brunch adventure and instead saved some room in her stomach for the delectable bites and beverages to be found at the annual Chicago Gourmet Festival, presented by Bon Appetit Magazine.  For those of you unfamiliar with this fancy festival of fancies, Chicago Gourmet brings together the best of Chicago's restaurants, celebrity chefs, high end caterers, and beverage experts into one glorious venue in the heart of Millennium Park for one weekend each year.  Unlike the popular Taste of Chicago festival, Chicago Gourmet charges a pretty steep ticket price, but all food and drinks come included with that golden ticket, along with access to live chef demos, classes, seminars, and lots of other hidden surprises. 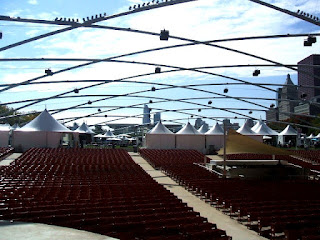 Brandy was fortunate enough to attend the festival last year, but having never been before, she had no idea what she was in for.  "It was like that scene in the movie about the chocolate factory where everyone walks into this magical wonderland," she would tell anyone who would listen, "Except instead of a river of chocolate, all I could see was wine.  The glass they gave me did not stay empty for long."  But this year, Brandy came with a game plan. 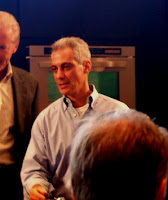 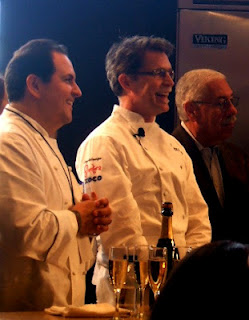 Firstly, Brandy toasted to the success of the festival with a few choice VIP's like Chef Rick Bayless, Chef John Besh, and Mayor Rahm Emanuel.  Editor and Chief of Bon Appetit Adam Rapoport was also on hand, and with a broad smile on his face, he asked Mayor Emanuel if the beautiful weather they were experiencing that day was typical for Chicago.  "Oh yeah," the Mayor drawled, "Seventy two degrees and sunny 365 days a year." 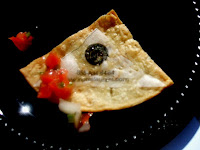 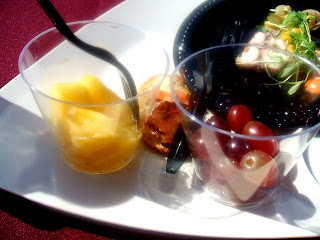 After that, Brandy headed straight for the chef tasting pavilions; large tented areas where 3-4 restaurants get crammed together to serve their best faces on a plate.  Right away Brandy spotted two of her favorite people, Chef Richie Farina from Moto, serving up carbonated pineapple and grapes (or as they like to call it "Soda of the future!"), and Chef Homaro Cantu from Ing with edible business cards printed on tortilla chips and served with pico de gallo.  Brandy could only shake her head and laugh at these two for not only keeping things simple when others chose much more elaborate food, but for actually bringing along a sense of humor (this was later demonstrated at their cooking demo, where more things were inhaled, smoked, vacuumed, melted, and decorated than actually cooked). 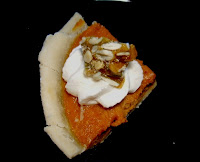 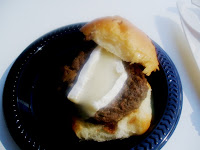 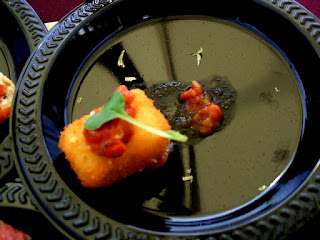 Of the bounty of food on offer that day, Brandy did gravitate towards a few special dishes.  The Brie Burger from Rockit Bar and Grille was a particular delight, with juicy, perfectly cooked beef, melty brie, and caramelized onions on a soft bun.  Brandy also enjoyed the Grit Cake with Tomato Jam from Untitled Speakeasy, which had the perfect combination of sweet, sour, crunchy, and creamy.  There seemed to be an awful lot of pork dishes out and about, perhaps because of the fast approaching fall weather.  Various squashes and sweet potatoes also found their way into quite a few plates.  Brandy particularly enjoyed the Butternut Squash Soup served with a cup of local apple cider from the Hilton Palmer House.  She also adored the Pumpkin Pie from Southwater Kitchen, one of the few desserts being presented, which had duck fat crust, ginger whipped cream, and a pumpkin seed brittle. 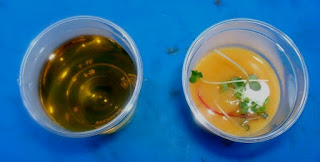 The amount of wine was overwhelming, even for Brandy, who was more in the mood for a quick grab and go drink, as opposed to stopping to talk viticulture.  Because of that, Brandy tended more towards the cocktail tents, which were featuring lovely concoctions with every ingredient under the sun (plus little to zero lines made these stops even more enticing to a woman who was determined to miss nothing). 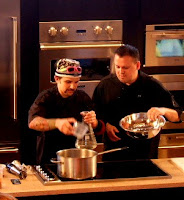 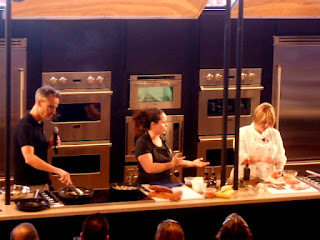 After finally feeling full, Brandy settled into a comfortable spot to watch some of the chef demos.  In addition to the chemistry lesson from the Moto/Ing boys, Brandy also took in some expert advice from Chef Tony Mantuano from Spiaggia, Chef John Hogan from Keefer's Restaurant, Chef Dirk Flanigan from The Gage and Henri, Chef Tony Priolo from Piccolo Sagna, and Top Chef darlings Chef Stephanie Izard from Girl and the Goat and Chef Sarah Grueneberg also from Spiaggia, all of which were thoroughly entertaining. 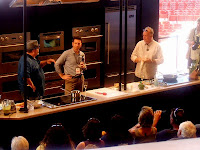 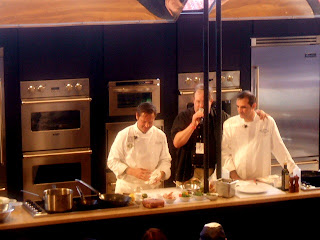 There were so many other delights that Brandy just couldn't get to, such as the Grand Cru, which featured some of the finest wines available, all chosen by expert sommeliers, and the pig roast, where cooks from The Purple Pig roasted a whole animal on a spit in the middle of the park.  But rest assured, dear readers, Brandy will surely bring you even more exciting tales from next year's festival, which she has already started dreaming of (and planning her outfit for).

To see all of Brandy's pictures from Chicago Gourmet, make sure to take a look at our Facebook page.

*The writers of this blog attended this festival for free as members of the media
Posted by Bunny and Brandy at 10:45 AM