Bistro 110 or A Fondu Farwell 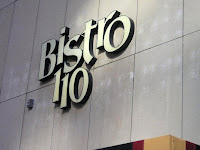 It's always hard to say goodbye, no matter how old you get.  It's a fact of life that friends come and go, which is a blessing and a curse, but we never seem to be ready for the changes that come our way.  So it is with a heavy heart that Our Ladies, accompanied by Biscuit Brown, headed to Bistro 110 on the Gold Coast, which after nearly 25 years as a traditional French/Cajun haunt is about to be re designated as a pizza, tapas, and wine restaurant.

Bistro 110  is surprisingly spacious inside, with several different areas of interest.  Cute touches brought in the New Orleans feel, such as wrought iron hat wracks on the walls and traditional French white table linens.  A little old fashioned for some, perhaps, but there seemed to be a decent amount of revelers presents for Bistro's final brunch.  A four man jazz band stood at the back of the room, playing cheerful classics like "When the Saints Go Marching In" to the delight of the diners. 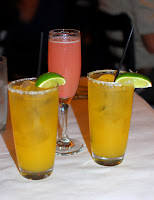 The menu offered a few options: a 2 course prix fixe, a 3 course prix fixe, or individual options.  Brandy, noticing that a drink was only $5 with the prix fixe, opted for that option, while the other two preferred just entrees.  Both Brandy and Biscuit sampled a French Margarita, a bright twist on the original with orange replacing lime.  Bunny chose the Bellini, which was also quite lovely and a good opener to brunch.

The meal began with some fresh baked bread, butter, and black raspberry jam, which was actually quite nice.  All three ladies commented that they would gladly make a meal from just this, the jam was that enticingly delectable.

For starters, Brandy insisted on a bowl of French Onion Soup.  This particular incarnation of the traditional soup was made with not only yellow onions, but also leeks and spring onions, adding to its rich flavor.  Of course, Brandy was only in it for the cheese, which did not disappoint in its gooeyness.

As a side for the table, a plate of Pommes Frites and Angle Hair Onions was ordered.  Arriving in a tangle of fried goodness, Our Ladies and guest simply could not stop picking at the plate. 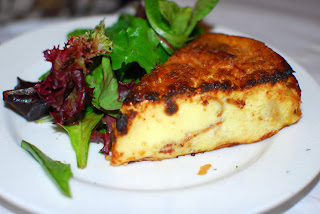 Brandy chose the Quiche Lorraine as her entree, which came served with a small salad of greens.  This quiche, dear readers, was the lightest, fluffiest, most airy quiche known to man.  Bits of bacon added just the right hit of smokiness, bringing the richness of the egg to the forefront, and the delicate crust was wafer thin, so as not to interfere with the heavenly interior. 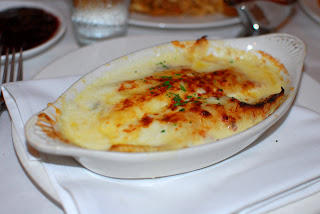 Bunny picked the Crepes A La Fricassee, a savory baked crepe dish with plenty of cheese on top and chicken inside.  Bunny commented that she thought this dish reminiscent of a cheese enchilada, but with more delicate flavors. 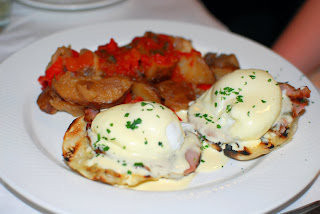 Biscuit ordered (much to Bunny's chagrin) the Voodoo Eggs Benedict, which came with smoked pork belly and voodoo potatoes.  At first, the wrong dish was brought to the table (the Eggs Louisiana which is made with Crab Cakes) but the mistake was soon corrected.  Disappointingly, the "smoked pork belly" seemed to be nothing more than sliced ham, but the eggs were poached well and the sauce was quite lovely.  The potatoes were the real surprise, though.  Appearing to be hot and spicy, they were actually quite creamy and sweet, having been cooked with bell pepper and tomato.

The round out the meal, Our Ladies and guest shared a Creme Brulee.  Another dish served very traditionally, its sugar crust certainly did not disappoint for cracking.  The custard within was somewhat cold in spots and warm in others, which was strange, but all in all it was light and delectable.  Bunny and Brandy both agreed that it could have benefited from a few fresh berries on top. 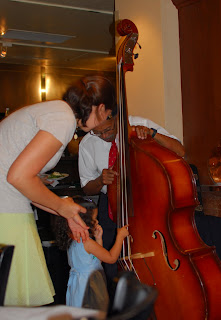 Bistro 110 will surely be dearly missed for its combination of traditional French fair, warm service, and relaxing decor (not to mention the amazing Jazz band).  We tip our hats to you, Bistro 110, and here's hoping your new incarnation will be as delightful as its predecessor! 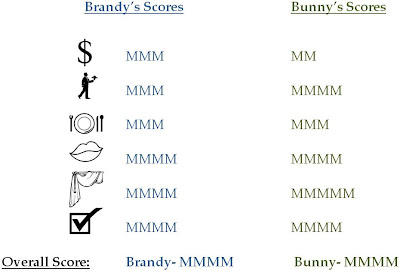 Posted by Bunny and Brandy at 8:36 AM