There are times in all of our lives when we all need warmth, comfort, good food, and company, and there is no better time for any of those fine things then on a blustery, blizzardy, bitterey day, such as this particular Sunday happened to be.  This is precisely why Our Ladies chose to deviate from their original plan of visiting one particular restaurant in Bucktown with a bread-based moniker in favor of somewhere that had less than a two hour wait for a table.  “Two hours indeed!” Brandy huffed as they trudged back through the snow to Bunny’s ’27 Model T, “I could die at any second, and they want me to wait two bloody hours for brunch?”  “It does seem a tad excessive,” said Biscuit Brown, who had joined Bunny and Brandy for a Girl’s Morning/Early Afternoon Out.    “Calm now, ladies,” Bunny said as she cranked the engine into life, “I have an idea.” 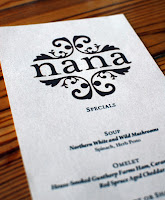 Half an hour later, they arrived, travel weary, at Nana in the Bridgeport neighborhood, an all organic family owned restaurant that’s still in it’s infancy, having opened a little over a year ago.  Three blue faces presented themselves to the smiling hostess at the door and they were whisked away to a spacious table near a window (“This is more like it!” Brandy was heard to mumble).
Nana achieves the remarkable goal of feeling homey and sophisticated at the same time.  Original art works, some of which are for sale, hang on the exposed brick walls just above white wainscoting, and at the back of the house is an open kitchen, where all of the action can be glimpsed.  A set of brothers, Omar and Christian Solis (“If their food is as delicious as they are, we’re in for a treat,” said Bunny), run the place along with the restaurant’s name sake, their mother, who is an accomplished pastry chef in her own right. 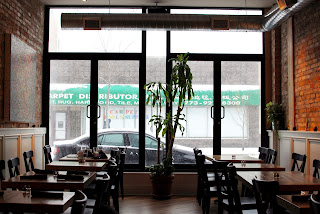 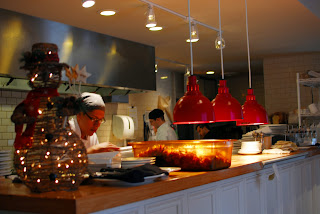 Our Ladies and guest had been hoping to sample that days’ special of roasted sweet potato beignets, but sadly, they were informed the kitchen had run out of them.  Instead, they were encouraged to split a plate of Gingerbread pancakes with roasted apples, which they agreed to.  Drinks were also ordered: for Bunny, a mocha for Biscuit a cappuccino, and for Brandy, a house made hot apple cider.  For entrees, Bunny, a sucker for a certain egg dish as always, ordered the Nanadict (a Latin twist on the original), Brandy got a bowl of the soup de jour as well as Pear and Raspberry stuffed French Toast, and Biscuit decided on the Fried Chicken and Waffles.

The gingerbread pancakes were utterly deliriously delicious.  They came served with a cinnamon sugar whipped cream, which only enhanced the taste the fire had licked onto the apples.  Brandy’s soup too was warm and filling, though she had mistakenly thought it to be a mushroom based soup.  “It says Northern white and wild mushroom soup, does it not?” she asked the table.  “Northern Whites are beans, dear,” said Bunny, which explained the abundance of legumes in the bowl.  Brandy devoured it none the less, savoring the still crisp veggies and the warming herbaceous broth. 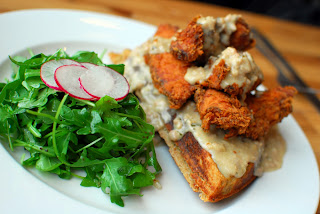 Biscuit’s Chicken and Waffles was thoroughly scrumptious; doused in a spiced and flavorful gravy, the dish left Biscuit with a twinkle in her eye and a smile on her face.  “This chicken makes me want to go home and slap my mama,” she said.  Seeing that her hostess’ faces had registered a touch of confusion and shock, she simply said, “It’s just an expression.  I’ve never slapped my mama, mostly because I would have been slapped back, 3 times harder.”  Blank stares met her laughter, so Biscuit shoved a waffle bite into her mouth.

Brandy’s French toast was beautifully presented with whipped cream and a sliced, poached pear.  The thick cut brioche was packed with a pink, cheesy filling that was sweet and creamy, but not overpowering to the dish.  The pear on the side, while a splendid garnish, also served the purpose of a side dish to help break up the richness of the plate.
Bunny’s Nanadict was more closely related to Huevos Rancheros than a traditional Benedict, but she found it refreshing.  Covered in chimichuri sauce, the brilliantly poached eggs rested on a zesty corn cake and were accompanied by some equally peppery potatoes.  Rich, well portioned, and unique, the Nanadict gets the stamp of approval from Bunny, Pros. Emeritus of Eggs Benedict. 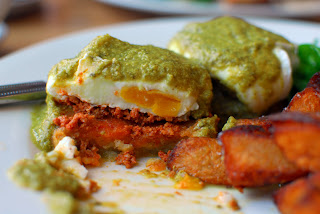 A little on the pricey side, but worth it for a place that is all organic and local, Nana gives one the feeling of being well looked after.  All they need to do is make warm, fuzzy blankets and slippers a mandatory part of the dress code. 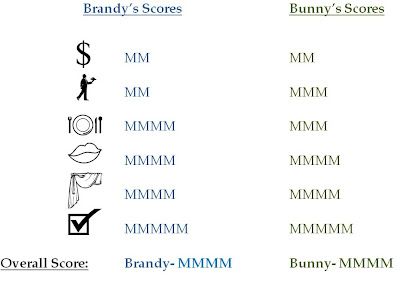 Posted by Bunny and Brandy at 9:06 AM