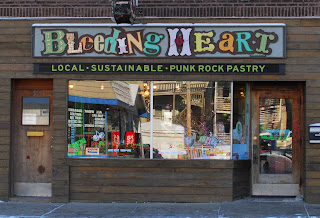 Bunny insisted on somewhere “fast and cheap” this week as she had urgent Christmas shopping to attend to, so Brandy suggested a bakery for a few nibbles, some coffee or perhaps tea, and provisions to go. Bleeding Heart Bakery was chosen because Brandy vaguely remembered they had been featured on the Food Network at some point. “If they even remotely know that delicious Jamie Oliver, then I want to make their acquaintance,” said Brandy.

Bleeding Heart Bakery, located just on the border of Roscoe Village and Lakeview, presents itself to the viewer with bright colored windows and a patchwork sign, declaring exactly what one is in for: punk rock pastries, all made from local and organic ingredients. The interior is just as colorful and eccentric; the walls are lime green and hot pink, the tables are shaped and painted like day-glow cupcakes, and every corner holds a surprise, like murals of brain eating zombies and peculiar sample cakes. Admittedly, Our Ladies did not know what to think of such a place at first, but then they laid eyes on the display cases, which were crammed full of all sorts of goodies, and their anxieties dissolved. 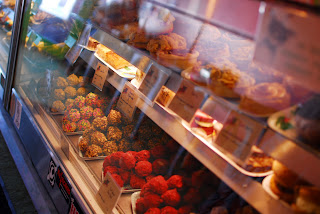 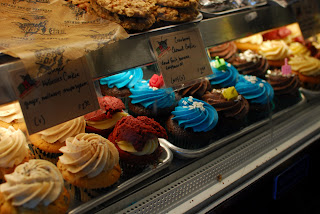 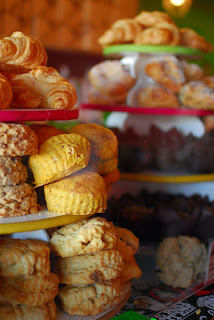 There were brownies and fudge, raspberry and lemon bars, gingerbread men, chocolate chip cookies, a variety of scones, tea cakes, and croissants, dazzling cupcakes, and piles of something called cake balls, which after inquiry, were found to be made from the scrapes of Bleeding Heart’s famous sculpted cakes. After taking it all in, Our Ladies began to notice that this was no ordinary bakery. The Chocolate Chip cookies had bacon in them, the scones had granola, and the ingredients of the cupcakes were unlike anything they’d ever seen before. It was a tough choice when confronted with such splendor, but eventually Our Ladies decided on a Triple Cheese Quiche and a cupcake for each. Brandy opted for the Sugar Plum Brulee cupcake, while Bunny chose a Gingerbread Lingonberry cupcake. Each also got a hot beverage; a Latte for Bunny and a Chai Latte for Brandy.

Although the quiches were warmed by a lovely attendant, the heat applied didn’t quite penetrate through to the middle, where the filling remained ice cold. However, the crust was delightfully flaky and buttery, and each bite of the filling revealed pockets of the cheesey treasure within.
Bunny’s Gingerbread cupcake was wonderfully moist, but more muffin like in texture. Topped with a nicely spiced piece of gingerbread and cinnamon sugar frosting, she found it a little under sweetened. While the Lingonberries made for an interesting choice on paper, Bunny expressed a wish for something with a tad more tartness, like some dried cranberries, instead. 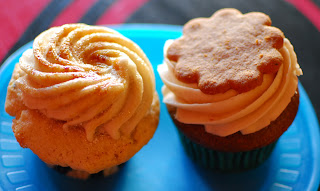 Brandy’s cupcake had a golden crust of torched sugar on top of the frosting, which when sliced open, cracked just like a real crème brulee should. The cake itself seemed to be a simple vanilla, studded with bits of candied plums. At first, she found the flavors a little overwhelming, but after tucking in properly, all of it seemed to meld together nicely. The best part, Brandy was heard to comment, was the surprise pocket of crème hiding inside the cake, just under the frosting.

Our Ladies learned something this week: there is nothing to be feared in adventurous pastry, because no matter how unusual the ingredients or flavor combinations may seem, at the end of the day, you still get to eat a pastry. Bleeding Heart Bakery is the perfect spot if you’re searching for something exciting without having to commit to a sit down meal. Bunny is currently begging her way into obtaining the Bacon Chocolate Chip Cookie recipe, while Brandy is considering dying her hair the same color blue she saw on one of Bleeding Heart’s patrons.
The Short and Sweet Review: 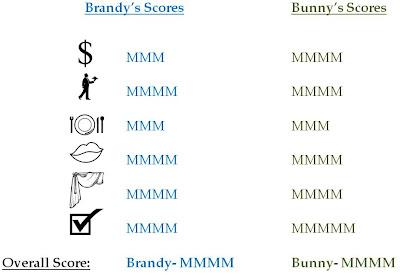 Posted by Bunny and Brandy at 6:56 PM