A Beginner's Guide to Cooking Fish with Sitka Salmon Shares

I received free products from Sitka Salmon Shares in order to facilitate the writing of this post. All opinions are my own. 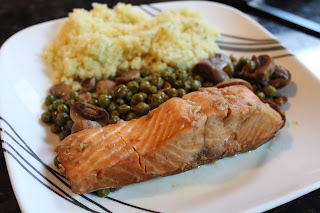 The first thing you need to understand is that I grew up in the desert. You know what there's not a lot of in the desert? Seafood. I mean, other than Red Lobster. In addition to being a desert dweller, my mother was not really a fan of fish. I have vague recollections of breaded fish sticks coming out of a toaster oven at some point, and on occasion, she mixed up a bit of tuna salad using stuff from a can, but that was really it. Add to that the fact that my only other experience with seafood was wrinkling up my nose as we passed the fish counter at the grocery store, and you have the makings of a 20+ year aversion to anything with gills. 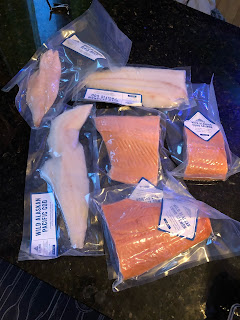 When I started this food blogging journey so so so very long ago, I began to think about my food phobia. I hated fish, but why? I'd never really had it. I'd certainly never ordered it in a restaurant. And I liked shellfish well enough, so what was the real problem?

Everything came to a head when I was at an event in which a very famous Chicago chef was cooking a meal live in front of a small crowd. That meal was a take on bouillabaisse, a tomato based fish stew, and he was chucking just about every type of aquatic life into his pot. "It's ok," I thought, "I'll just pick around the fish and eat the mussels." Then, much to my horror, the chef himself began ladling soup into our waiting bowls, and with a smile, he gave me a huge chunk of fish meat. "Want to make sure you get a little bit of everything," he said with a wink. I steeled myself for the worst as I lifted a spoonful of fish to my lips and... it was actually quite good! Then and there, I made a deal with myself: if I was ever offered fish, I was going to accept it, and I have been happily surprised by many delicious fish dishes ever since. 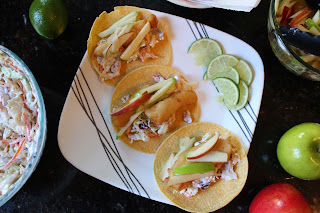 Now that brings us to the present and my first interactions with Sitka Salmon Shares. When they first approached me about trying one of their boxes full of freshly caught Alaskan seafood, I was admittedly apprehensive. Having seafood presented to you by a master chef was one thing; preparing it myself was quite another. But now that I have a proper kitchen and my cooking skills have increased beyond that of a starving college student throwing things together in the vein hope they will be edible, I decided to be brave and give cooking fish a shot. 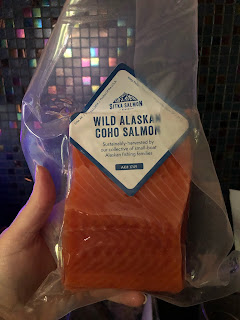 When I received the box from Sitka, I was immediately impressed with everything. Not only did the vacuum packed cuts of fish look vibrant and clean, they had also included several recipe cards, information pamphlets, and a small cedar wood plank, presumably for grilling the fish on. The even had an insert informing how to properly remove pin bones from the fish, something I had been worrying about doing wrong! Each individual cut of fish was portioned and cleaned, and then clearly labeled with its species, date caught, and even the name of the fisherman who had caught it! Best of all, everything arrived frozen solid with not even a hint of odor.

Sitka Salmon Shares works much like a farm co-op; subscribers sign up for a period of 3-9 months, and are then sent a box each month containing a portion of an individual fisherman's harvest. This system not only ensures that the fishermen get to keep a higher portion of the sale than they would by selling their wears on the open market, it also gives the subscribers access to the most seasonal varieties of fish.

I decided to start my fish cooking journey by tackling a small cut of Coho salmon. I made a quick little marinade out of soy sauce, honey, garlic, and ginger, then steamed the fish in my Instant Pot along with some mushrooms, peas, and onions. The result was a nicely flavorful fish, but a little over cooked and dried out. Next, I decided to attempt a salmon quiche. I oven roasted a cut of Keta salmon, then shredded the meat. This time, I cooked the salmon to a perfect consistency, so it remained moist and flavorful. I added the meat to a pre-cooked pastry shell along with some sauteed onions, spinach, and Swiss cheese. I then poured a mixture of eggs and heavy cream over the whole thing and baked it for about 35 minutes at 350. Now, I know some people are squeamish about fish and cheese, but I thought the nuttiness if the Swiss and the butterines of the salmon worked really nicely together! 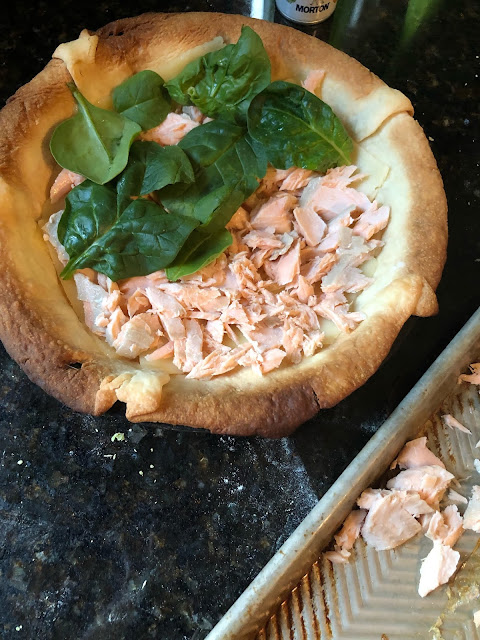 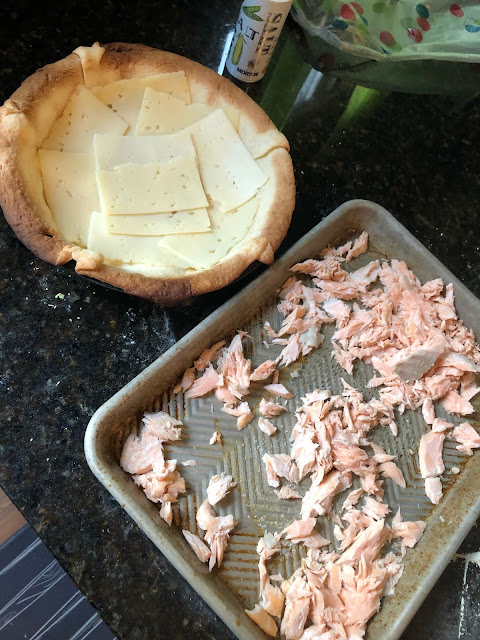 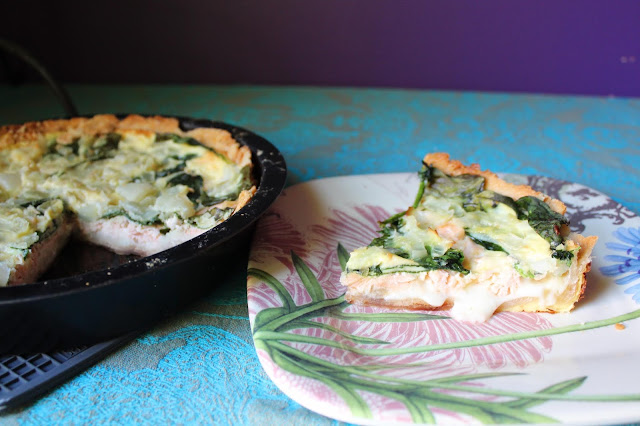 Feeling a little more confident, I decided my next task was to tackle the two pieces of Wild Alaskan Pacific Cod. The first thing that popped into my mind was fish and chips, and following that, fish tacos, so I decided to combine the two. I cut the cod into small chunks, beer battered it, fried it, and combined with with a simple slaw (cabbage, red onion, and carrots mixed with mayo, sour cream, and lime juice), and did a quick pickle on some apple sticks to add a bit of brightness to everything. I was pretty happy with the results, and the softness of the cod inside the crispy batter was so perfect with all the crunchy toppings! 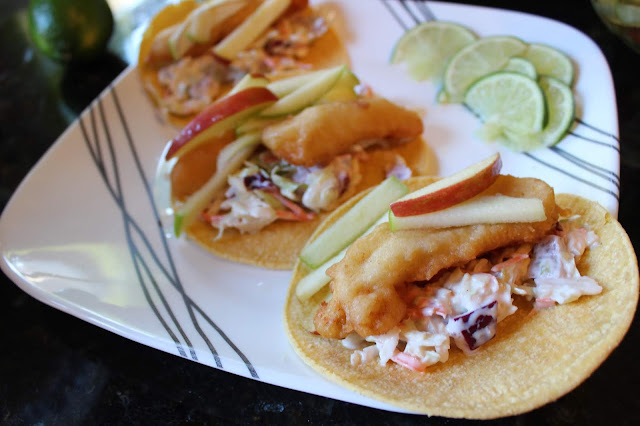 I saved the best and most daunting fish for last. My box had included a beautiful piece of sea bass, and I fretted for a while about what I was going to do with this delicate fish. I just so happened to have picked up a sous vide circulator, and after a bit of research, I discovered that using a sous vide machine to cook sea bass was a very good idea. I placed the fish into a ziplock bag along with some butter, garlic, salt, and pepper, the cooked it in the water bath for 30 minutes at 133 degrees. In the meantime, I whipped up a quick gnocci side dish with some wilted baby kale and Parmesan cheese. The sea bass out of the bag was so tender that it began breaking apart as I plated it! This was definitely my favorite preparation of them all, if only because it made me feel so dang fancy! 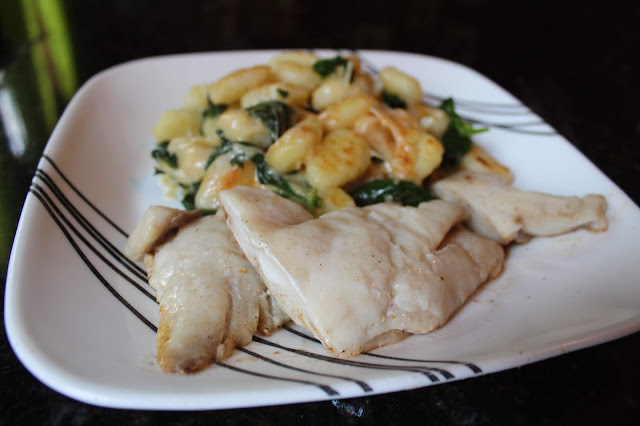 It really surprised me how comfortable I've become with cooking fish over the last few months. I've gone from completely intimidated to completely enthusiastic. It just goes to show that when you are working with a product of such high quality, you really can't go wrong. Whether you are an experienced fish chef or a curious beginner like me, I cannot encourage you enough to consider signing up for one of Sitka Salmon Shares' subscription plans. Let me know in the comments what your favorite way to cook seafood is!
Posted by Bunny and Brandy at 10:57 AM