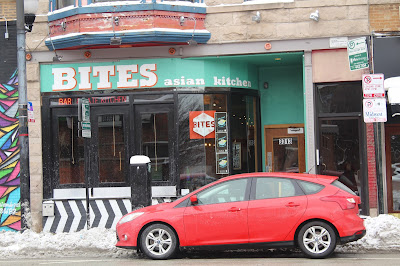 Umm... hey there! I'm Jessica and I have been Bunny and Brandy's "interpreter" since the inception of this blog seven and a half years ago. If you've been reading this blog on the regular since then, thank you so much. It's been a crazy journey that has taken me to a lot of places I never dreamed I would go. That being said, Bunny and Brandy, those darling old lushes we all know and love, are getting on in years now and have decided to hand the reins over to me for a little while. I hope you all won't mind, but if you do start to miss them, feel free to let me know in the comments, and I'll see what I can do about getting them back in the saddle. 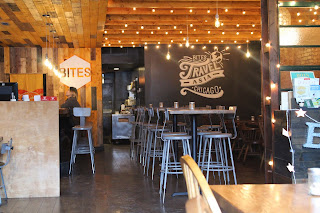 A few weeks ago, I had the opportunity to check out Bites Asian Kitchen and their new East meets West brunch menu. Funny thing is, Bites is actually right across the street from my office. I am literally looking at their teal awning as I type. And while I am in the habit of supporting a lot of the restaurants in the immediate area, for some reason, I had never gone to Bites before. I don't really know why that is, but (spoilers) after this meal, I am determined to frequent it a lot more often!

I met up with my friend Kristin, who I've barely seen since she gave birth to beautiful baby girl last spring. And this being one of the first chances she's gotten to step out of the house on her own, she was just as excited as I was to check out the cocktails. She started off with Good Morning Mexico, a sort of mix between a Paloma and a Mimosa, which she really liked because it was refreshing and very original. I went for the Wake Me Up Before You Go Go, which had mango, strawberry, cucumber, lemon, elderflower liquor, and gin. I get kind of iffy with cucumber in my cocktails because it tends to take over the ENTIRE drink. In this case, however, it actually worked quite well with the sweetness of the fruit. 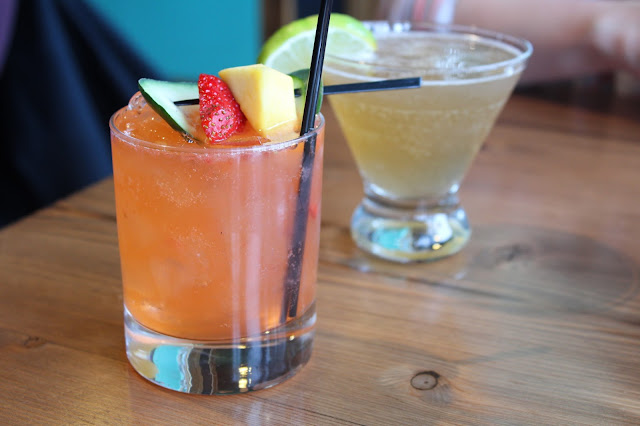 As Bites specializes in smaller, shareable dishes, Kristen and I decided to order a few things to munch on. First up was the Emerald Gyoza. These were pretty traditional gyoza (a type of Japanese dumpling that can either be pan fried or steamed), but they had a really creamy interior filling because of the incorporation of some edamame. The whiskey soy sauce and wasabi mayo on the side also gave them a more interesting flavor and more modern feel. Next, I reached for the Teriyaki Sliders, which were literally dripping with a beautiful soy butter glaze. As sliders can be a little tough sometimes, I was really happy to find these suckers were perfectly pink in the middle and plenty juicy. The western side of my palate was satisfied with the melty mozzarella cheese and the crispy fried shallots, while the eastern side loved the shiitake mushrooms and the slightly sweet flavor. Kristin had requested that we order the Tempura Avocado, which I was a little skeptical about, but they turned out to be really delightful. The outside of the wedges was light and crispy, while the inside was perfectly creamy and not at all greasy. The last of our little snacks were the massive shrimp cakes. These had a nice bouncy texture to them, and while their flavor was a little muted, the addition of some sweet chili dipping sauce and a cucumber salad really helped to bring out their specialness. 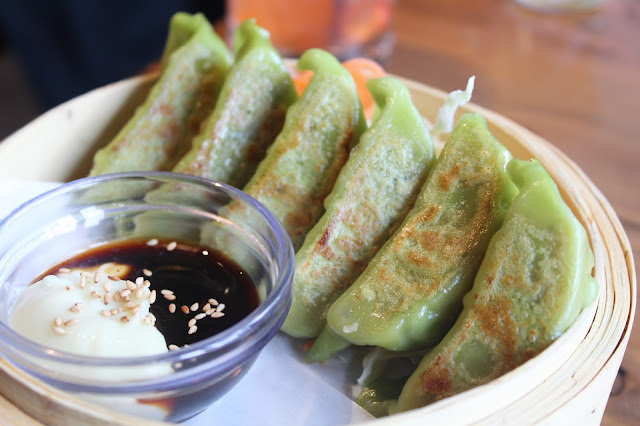 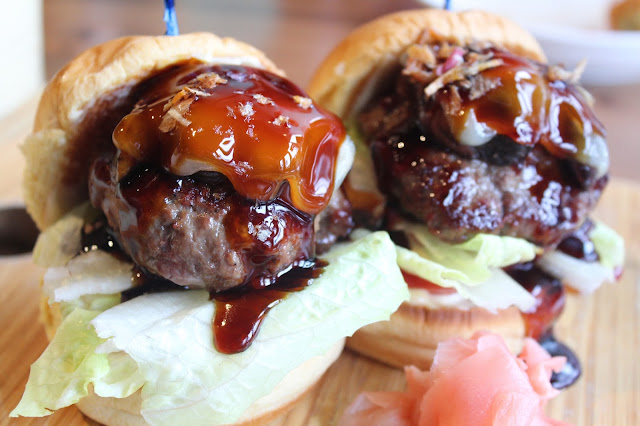 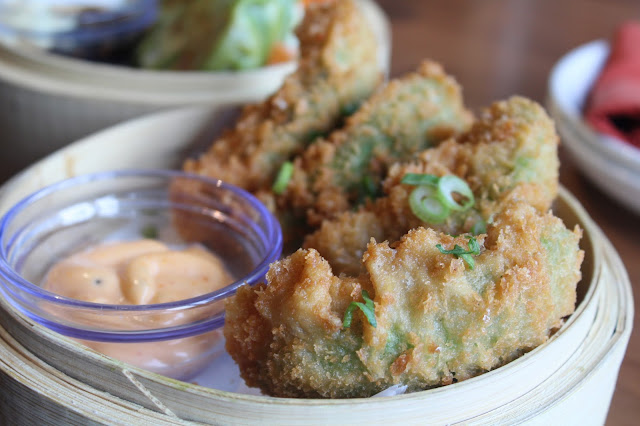 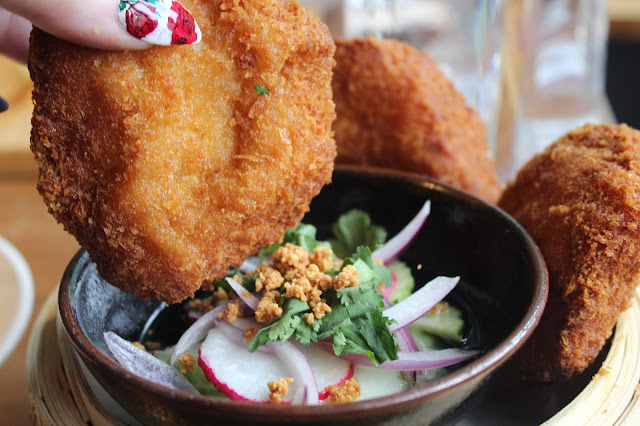 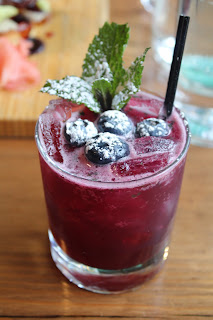 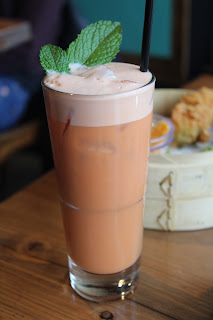 For our second round of drinks, Kristin picked the Blueberry Mojito, while I went with the Thai-rish Coffee. Kristin's mojito was very fruity and had just the right amount of mintiness to it. She actually managed to lap me because she could not stop sipping on this thing, and she ended up having to order one more cocktail before we ended the meal (her last drink was the Smokey Blonde, which was a really excellent whiskey cocktail). I have a deep love for Thai coffee and Thai iced tea, so you can imagine how much I LOVED the Thai-rish coffee. It was a little bit too easily drinkable, if you know what I mean.

For the main event, I really wanted to try their Okonomiyaki, a Japanese dish that is sort of like a combination of a pancake and a frittata, and comes slathered in Japanese mayonnaise and a sweet glaze that resembles BBQ sauce (yes, it's different, and yes, it's delicious), and is then topped with seaweed and bonito flakes. I'd only had okonomiyaki once before, but I knew what to expect because of my obsession with food Asian food vloggers, so I warned Kristin that the bonito flakes would be "dancing" on top of the okonomiyaki so that she wouldn't freak out and think it was alive. She was interested to try it, but she was already pretty stuffed, which left the entire dish up to me to finish. I really liked the big hunks of bacon hidden in the batter along with a variety of veggies, which made every bite kind of exciting and different. One of these days, I'm going to try my hand at making one of these suckers. 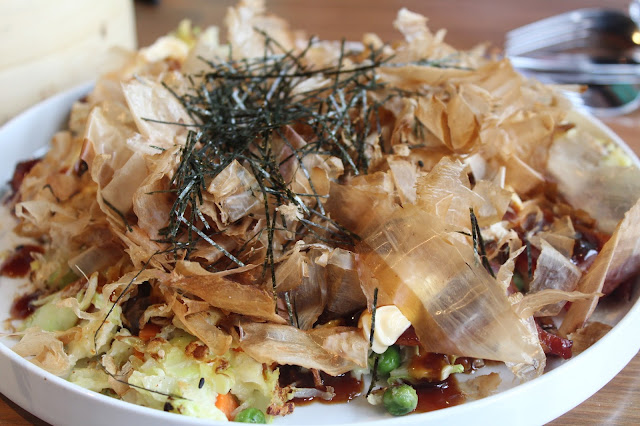 Finally, we finished off our massive meal with their Coconut Milk French Toast. The French toast itself was pretty good, nothing amazingly special, but had a good texture and just a hint of coconut flavor. The real star on the plate was the pandan syrup. I've never really had pandan anything, but I am officially now on the lookout. It's got a vivid green color, like matcha, but the flavor is like a coconut and vanilla custard, and it turned this French toast into something really spectacular. I would order this again in a heart beat if only so that I could drink that syrup. 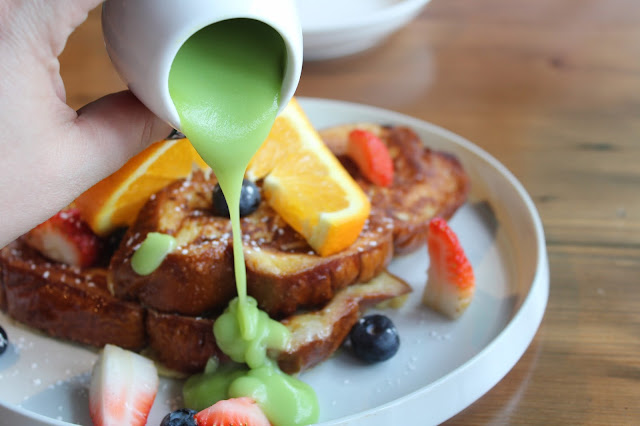 If anything sums up my new found love for Bites, it is probably this; while sitting here at my office desk, trying to write up this post between doing actual work, I have just been salivating at the memory of this meal. I literally just went to Grubhub to see if I could order some lunch, only to have my heart broken when I was informed that they don't open until 4:30. Ah well. I'll just have pop over there tomorrow morning.

I was invited to dine at this restaurant free of charge in exchange for an honest review of my experience.
Posted by Bunny and Brandy at 1:08 PM