Firecakes or Donut it 'till You've Tried It 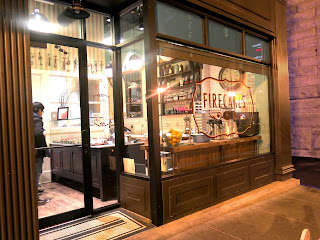 For Thanksgiving, Brandy usually meets with a group of fellow displaced Europeans for one of the most eclectic pot lucks known to man.  It's the same every year; Inga brings the lutefisk, Gari brings the vegetarian haggis, Rudolpho brings a variety of heirloom olives and several bottles of wine from his family's vineyards in Santa Christina, and Brandy brings a dessert.  "I used to like changing it up each year," Brandy says, "Bringing in a sticky toffee pudding one year, then a tres leches cake the next.  But it all went to pot the year I brought the pumpkin pie.  Now they all think I'm the most American of the bunch and I have to bring that damned squash every year.  But perhaps this year, it's time for a change."

In search of new and exciting sweets, Brandy stumbled across Firecakes Donuts, or rather she stumbled in front of them when they were presenting at this year's Chicago Gourmet.  In a sea of donuts that were presented this year, Firecakes stuck out in Brandy's mind as the best, as their flavors were exciting, yet approachable, so she decided to seek out their home base for some inspiration. 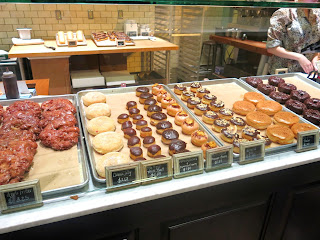 Firecakes, as it turned out, has a small store front just off the corner of Hubbard and Clark.  There was enough room for a few people to move about comfortably in front of the display counter, though the only place to stay and enjoy one's donuts was outside at the tables in the small side walk patio enclosure.  Still, the atmosphere was quite a bit more welcoming than certain vault-like donut shops and Brandy loved that all of the wears were on full display while not overwhelming the customer with choices. 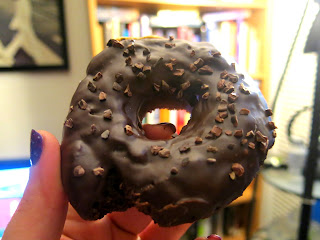 After getting her precious pastries home, Brandy dug in straight away.  She started with one of the seemingly more simple flavors, the Triple Valrhona Chocolate Donut.  This was a cake donut, though it wasn't as dense as some other cake donuts Brandy has had in the past, nor was it sickeningly sweet.  The texture was velvety and smooth with a very fine crumb to it, the icing rich and slightly bitter, and the crunchy cocoa nibs on top an absolutely perfect finishing touch. 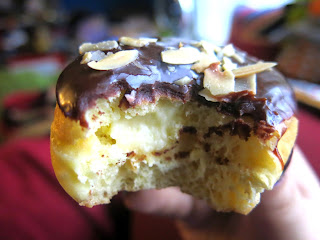 Next was the Almond Joi donut, which Brandy had previously tried at this year's Chicago Gourmet festival.  The coconut custard inside was nicely rich without being overwhelming and the chocolate glaze was the same bittersweet masterpiece that had topped the previous donut.  Brandy again appreciated the little bit of texture from the sliced almonds. 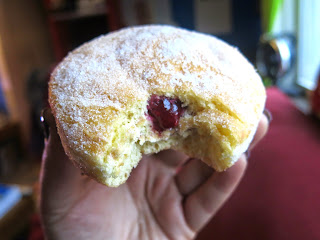 The Classic Jelly at first appeared to be just that: a traditional sugar coated jelly filled donut, but the girl at the shop had told Brandy about how the jam fillings changed with the seasons, and the current flavor was raspberry blood orange.  The yeast donut was nicely soft, but not without some weight to it, and the jelly center was incredibly bright with a pleasant hit of acidic sourness. 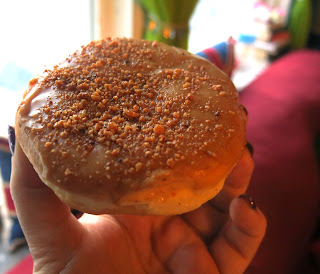 The Butterscotch Praline was one of Brandy's favorites, not only because it was gigantic, but because the buttery glaze and slightly salty custard filling were infinitely eatable.  "The only thing that would make this donut better would be if it came with an actual shot of scotch," Brandy mused, dreamily. 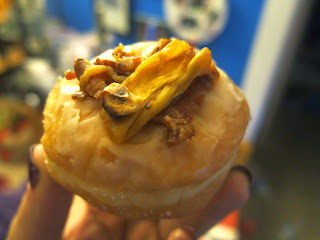 The Bacon Maple Pineapple donut was the only confection on the current menu with a savory twist.  Brandy was a little disappointed to see that this donut did not have a filling, though the toppings were quite bold enough to make up for it.  Sadly, the maple flavor got pushed a little to the side and the bacon and pineapple combined to remind Brandy of a Hawaiian pizza.  "Not too sure about this one," Brandy said, starring down the donut, "Though, I respect its right to exist." 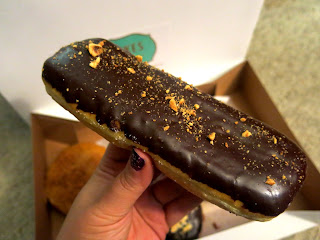 Another favorite was the Nutella Long John, which had a thick layer of chocolate glaze, crumbled hazelnuts on top, and an addictively creamy Nutella flavored cream center.  Brandy loved that the richness of the hazelnut spread was toned down a little by turning it into a more pudding like texture that held its place nicely in the center of the donut without dripping out. 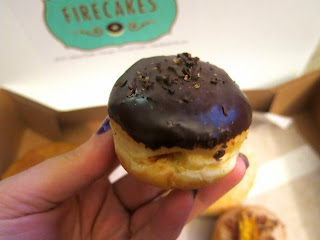 The Chocolate Espresso Cream donut was another traditional flavor combination, made special by the use of extraordinary ingredients.  The cream center of this donut was spiked with a pretty potent coffee flavor that rich and smooth without being bitter.  "I appreciate this," Brandy said, "You don't need a cup of coffee with your donuts when your donuts are your coffee!" 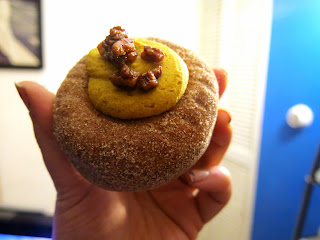 Lastly was the elusive Pumpkin Pie Donut, This was another cake donut with a heavy amount of spice added, almost like a traditional apple cider donut, but topped with a light and fluffy pumpkin mousse and bit of roasted pecans.  "This is good enough to have for Thanksgiving!" Brandy swooned, "It's just as satisfying as a slice of pumpkin pie.  Perhaps its time start a new tradition..."  And without further ado, Brandy picked up the phone and ordered several dozen of the delicious treats to be picked up just before Thanksgiving.

Brandy was sure that the donuts from Firecakes would be a success at the annual Ex-Pat Thanksgiving dinner as she didn't have a single one she disliked.  Great quality ingredients, generous portions, adorable yet simple decorations, and a cheerful and helpful staff meant that even though the donuts were a little on the pricey side, they were well justified.  "It may shock one or two of the Ex-Pats at first to see donuts at dinner," said Brandy, "But if they insist on labeling me as the most American in the bunch, then they should be pleased.  After all, what's more American than a deep fried dessert?" 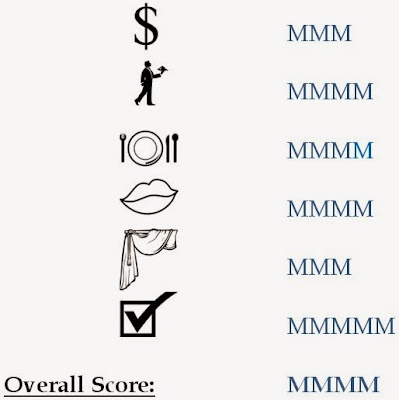