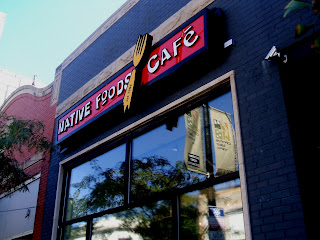 In her many years upon this planet, Brandy has flirted with a lot of different lifestyles (and lifestyle coaches), but none has tempted her so much as becoming vegetarian.  "I don't eat animals I think are cute," she explained once, which pretty much only eliminates dogs and cats from her menu choices...well, dogs for certain.  Quietly, Brandy has gone through several phases of vegetarianism, from cutting out all animal products together, to only cutting out meat from land animals.  Its not that vegetarian fare doesn't appeal to her; on the contrary, Brandy quite enjoys a good vegi burger, BBQ seitan, or tofu stir-fry.  But the lure of the beef burger, BBQ chicken or shrimp stir-fry inevitably draws her off the band wagon. 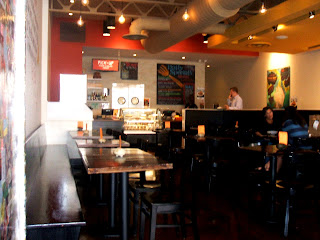 Being rather secure for the moment in her lifestyle choice of being a carnivore, Brandy headed into vegan fast food specialists Native Foods Cafe in Lakeview one afternoon for a quick brunch.  Right away, Brandy was impressed by the friendliness of the staff, the colorful decor, and the fact that vegan recipes were posted everywhere from the walls to the tables.  As Brandy approached the counter, a lovely young man smiled widely at her and asked if it was her first time there.  Brandy nodded, gazing up at the board listing the specials of the day.  Straight away, the young man launched into descriptions of some of the dishes on offer, making sure to point out his particular favorites.  Brandy spotted a few things right away that sounded pretty appealing, so she placed her order and looked around the space for a nice sunny table.  "Also, because its your first time here, you drink is on the house!" the young man informed her.  The usually sour faced Brandy had to smile back at him as he handed her a glass and pointed her towards the drinks station. 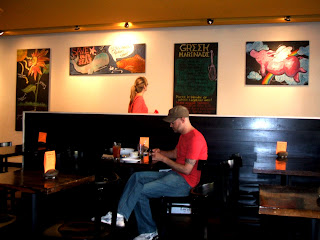 Brandy sided with the Lavender Lemonade.  She loved that the drinks bar included several options for garnish, including lemon wedges and mint leaves.  "Such a nice touch," she said to herself as she filled her glass.  The lemonade had the perfect amount of sweetness to it, and had just tasted very refreshing indeed.  "I was worried it would taste of soap," Brandy said to a curious couple across the way from her table, "But its rather lovely, actually.  Not too herbal at all." 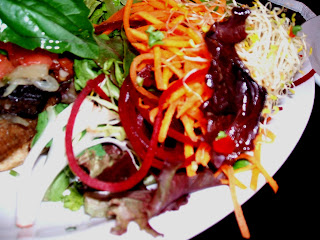 In less time than it took for Brandy to take out her copy of Sense and Sensibility (she enjoys reading Jane Austin just before meals as she says the sentimentality peaks her appetite) her food had arrived.  Brandy had ordered the Portebella and Sausage Burger with a side salad, all of which looked lovely and colorful.  The salad had a nice variety of crisp, fresh veggies, including some you don't see every day on a fast food salad, like beets, alfalfa sprouts, and sunflower seeds. 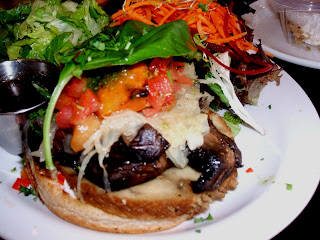 The burger was rather tasty, if a bit off putting to a normally meat eating consumer.  The mushroom was definitely the star of the piece, but the spiced "sausage" also had a very nice texture to it that isn't always present in some fake meats.  The bun was quite soft and supple, which Brandy liked, and she soon found herself surprisingly (or unsurprisingly, as the burger was quite substantial) growing rather full.  But she made sure to save room for dessert.

It should be noted that just as she was finishing up her main course, a very sweet server approached her table, seeing that her glass was empty, and offered to fill it with more lemonade.  "It's your first time here, we have to give you the full service treatment!" the adorable young thing said to her, causing Brandy to try and hide her grin behind the pages of her book. 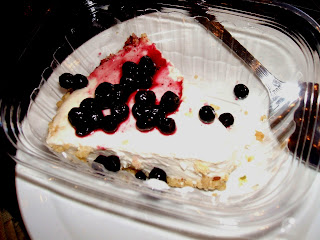 She decided to finish up her meal with some Vegan Cheesecake.  The cake itself was incredibly creamy and smooth without being too rich.  The crust was made up of crushed nuts and oats, which surprised Brandy in a good way, as she had expected a more traditional graham cracked crust.  To add a bit of brightness to the dessert, Brandy had been given a small cup of sweetened blueberries, which really made the whole thing very refreshing indeed.

And so, after flirting with vegetarianism (as well as a few vegetarians), Brandy was sorely tempted once again to jump aboard the meat-free band wagon.  Well, at least until she is presented with a plate of bacon at next week's brunch. 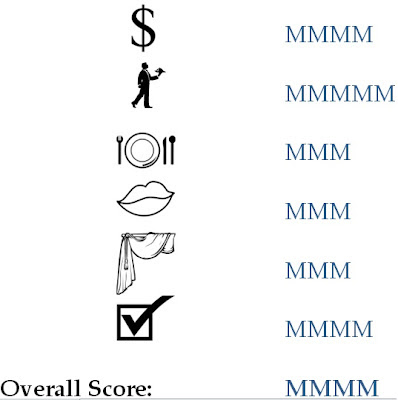 Posted by Bunny and Brandy at 9:49 AM