Frog N Snail or The Bold and the Beautiful 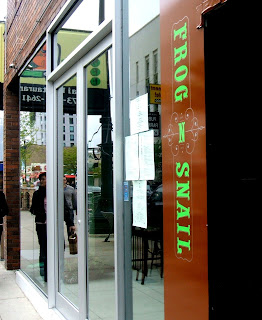 There are not many who would describe Brandy as being subtle.  Those around her have gotten fairly used to Brandy constantly causing heads to turn over anything from her brassy style choices to her sassy mouth.  But it's never seemed to bother Brandy, no matter how many gasps she elicited or how many stuffed shirts she ruffled (as proof of Brandy's unique ability to amaze and annoy people of all creeds and backgrounds, while strolling through an Occupy Chicago protest, she dropped a one liner that somehow managed to offend both the protesters and policemen.  No one is sure exactly what was said, all that is known is that she was threatened with liable suits from both parties).  Such is the burden of Brandy to bare.

It was her admiration for all things brazen that lead Brandy, and her infamous companion Mama Bee (owner and operator of Honey Bee Bakery and devoted honey advocate) to check out Lakeview's newest (and we mean brand new, as in opened in March 2012) hot spot, Frog n Snail, pet project of Top Chef alum Dale Levitski.  This little jewel calls itself a "Midwestern Bistro," serving familiar comfort food with a heavy twist of French cuisine.  Brandy was intrigued by the tales of a baker working through the night to have fresh pastries ready to go for the morning's "cafe" service (which starts at 9:00am every day and continues until dinner service) and the one of a kind beverage offerings, so she knew this would be the perfect place to take a celebrity like Mama Bee. 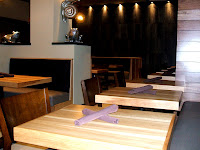 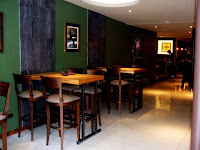 Having been familiar with the space's previous incarnation (a failed Thai restaurant called Sura, a favorite of Biscuit and Birdie Brown) Brandy couldn't help but appreciate the transformation.  The front bar and coffee station mirrored a few high tables and chairs in the only sunny spot of the restaurant, but going deeper in, one is greeted with the warm wood table tops and friendly color and textile choices (sage green, chocolate brown, and a buttery yellow, with sparkling cork overlays on the walls).  "Reminds me of my very own living room!" Mama Bee exclaimed, "I chose these exact colors because they're calming to bees."  "Aren't bees color blind?" Brandy asked.  Mama Bee brushed this inquiry off and took her seat at the table.  Although the back portion of the restaurant was a bit dark, due to lack of sunlight, Brandy thought a good job had been done of adding warmth via the lighting. 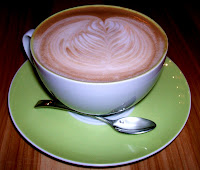 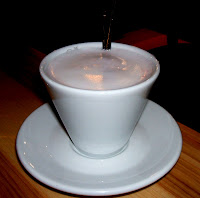 The women were presented with two menus, the Cafe menu featuring the aforementioned beverage and pastry choices, as well as a few breakfast-y sounding plated dishes, and the Lunch menu, with more traditional entrees on offer.  They decided to start off with drinks: for Mama Bee, a Peppermint Mocha, and for Brandy, a steamed milk concoction flavored with strawberry, coconut, and elderberry.  Mama Bee took one sip of her coffee, and a slow smile spread across her face.  "It's got just the perfect little hint of mint," she said, "Not too sweet, so it still tastes like its meant for an adult.  This would go perfectly with my special honey shortbread biscuits!"  Brandy also deeply enjoyed her beverage, which had a light, flowery flavor.  The drinks were so delightful that once she had finished her first one, Brandy ordered another, a Cinnamon Malt Latte, a combination that seemed strange at first, but was ultimately warm and delicious.  "It's nice to have a spiced drink that doesn't remind one of Christmas," Brandy said, "The malt almost makes me think of an old soda fountain shake.  Ah, those were the days..." and she trailed off into nostalgia. 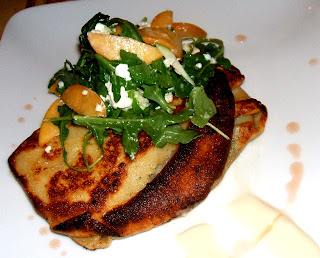 To start with, the pair split an order of the Peach and Mushroom Crepes, such an odd sounding combination that it had to be sampled.  What they got was a gutsy blend of flavors and textures: sweet, almost tart peach slices, buttery, crisp crepes, earthy mushrooms, creamy goat cheese, fresh arugula, and a little crunch from tiny cauliflower florets.  All in all, an odd combo indeed, but an ultimately successful one. 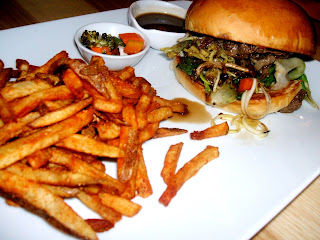 For her entree, Brandy originally ordered the Sweet Pea Risotto Cake, but sadly was told that the kitchen was waiting on the ingredients to make the day's batch, so she instead she settled on the Beef Hodgepodge sandwich.  This ingenious idea for using trimmings from some of the more formal cuts of of beef on the menu (shortrib, New York strip steak, and ribeye) came with crisp veggies like carrots, bean sprouts, and baby bok choi on a soft, freshly baked bun, accompanied by some jus for dipping, house made pickled veggies, and a heap of spiced French fries.  The sandwich itself was almost more like a stir fry, and was so juicy that the soft bread was soon falling apart, causing Brandy to revert to a knife and fork to finish every last tender morsel.  The unusual spice on the fries was almost sweet (possibly from the addition of some sweet paprika). 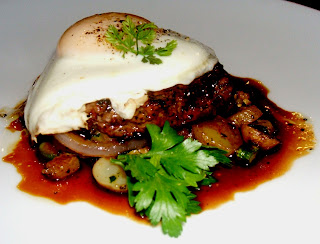 Mama Bee settled on the Manhattan and Egg, a more sophisticated version of steak and eggs.  The steak itself was tender and succulent, but Mama Bee wasn't quite sure about the very peppery house made Worcestershire.  "It's quite a lingering flavor, isn't it?" she said, mulling over the sweetish sauce, which also covered some fingerling potatoes and assorted veggies.  A few more bites seemed to mellow out the sauce's effect, mixing with the rich yolk of the egg to create more of a velvety balance. 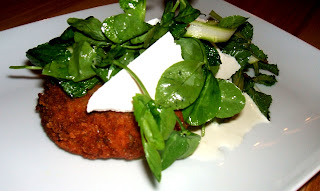 Their very attentive, smiling, and helpful server then surprised Brandy and friend with the aforementioned Sweet Pea Risotto Cake (he told them that one prepped cake had been discovered and he had it brought for them to try).  The cake itself had a wonderful crunch on the outside, and was soft and slightly sweet on the inside.  A lemon cream sauce served to brighten the dish, and a salad of mint and briny ricotta brought delight to Brandy's tongue.  "This is probably the most subtle dish we've tried today," Brandy mused, "Which makes it a nice break from all of these bold flavors." 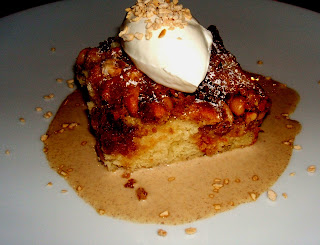 The ladies couldn't leave without a little dessert, of course.  Mama Bee decided on the Sour Cream Coffee Cake, which was incredibly moist, nutty, and well spiced.  "The sour cream they've topped it with is brilliant," she said, scooping a little onto her fork, "Normally I think the sweeter, the better when it comes to my desserts, but I love the tartness in this." 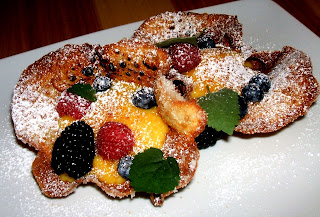 Brandy opted for the Passion Fruit Cups, two very large pastry shells filled with passion fruit puree, pastry cream, and fresh berries.  Brandy was slightly overwhelmed by the size of the dish, as just one of the cups would have been sufficient.  The pastry cups were nice and crunchy, with an almost bruleed like texture and taste to them, the berries were beautifully fresh and untouched, and the pastry cream was thick and indulgent.  Brandy's only complaint was the passion fruit itself, which was quite over powering.  She wished it could have been incorporated into the pastry cream somehow to mellow its forwardness.

Brandy and Mama Bee all but waddled out of Frog n Snail, though their wallets were not as empty as one might have thought (three drinks, one split entree, two full entrees, one complimentary entree, and two desserts, plus tax and tip only came out to about $80 for the two of them, an extraordinary feat for such high quality food and generous portions).  Brandy may have found a culinary match for her boldness, as Frog n Snail managed to accomplish something many have tried to do, but very few have succeeded at; the service, surroundings, and sumptuous offerings had left Brandy speechless, and there seems to be no greater compliment than that. 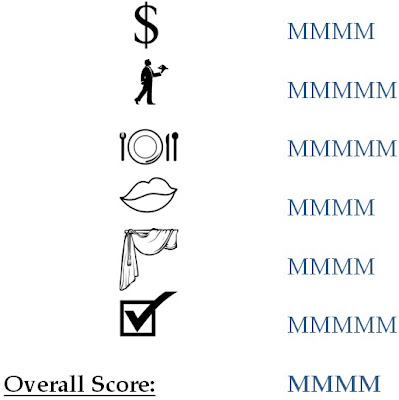