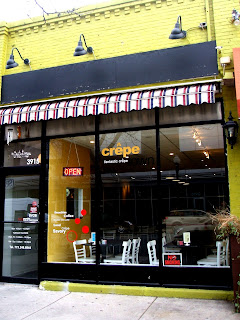 It's difficult to pinpoint a country Brandy has not sampled the cuisine of a thousand times over.  She has munched on Moroccan, nibbled on Nepalese, crunched on Croatian, sampled Spanish, and even tasted Tanzanian.  She is so well traveled that customs agents the world over take it for granted that there are at least three bottles of wine in her bags at any given time and wave her through without question.  Therefore, it is rather hard to surprise her any more with an exotic ancient recipe from some far corner of the world.  However, there is something which does excite her, something that she rarely sees, and even more rarely sees done right.  That thing is the ever popular Fusion Cuisine; a combination of two or more contrasting international cuisines into one marvelous marriage of mangiare. 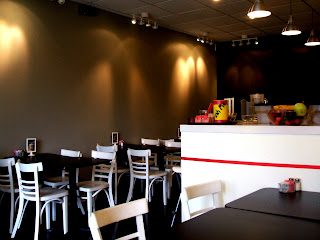 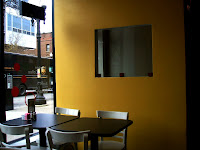 It was the prospect of good fusion food that lead Brandy to Crepe Town, a small but hip crepe boutique just off the Sheridan Red Line Stop.  Founded by a couple from Thailand and offering not only crepes, but fusion pasta dishes and a variety of snackables, Brandy instantly found this place intriguing.  The interior was clean and modern with pops of bright color behind the coffee bar.  Soft jazz (which many find hokey and old fashioned, but Brandy feels puts one in the mood for a relaxed meal) played in the background. Brandy found a lovely seat near the window and settled in to peruse the menu.  She found it quite helpful that the crepes had been sectioned off into three categories, "Savory," "Sweet," and "Breakfast."  "If only all the restaurants I frequent had their menus set up this way, I'd be a very happy woman," Brandy mumbled to herself. 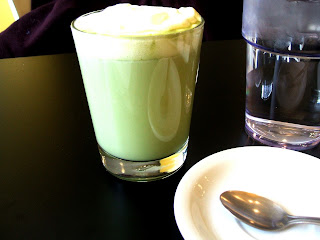 She started off with a Green Tea Latte, which came delicately served with cold whipped cream on the top.  The flavor was just as vibrant as the color (the drink was smartly served in a clear glass, so as to see the remarkable shade of green), tasting almost like warm, melted ice cream.  After the first sip, Brandy made up her mind to order a second cup. 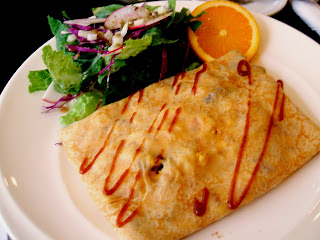 After a long inner debate, Brandy settled on the BBQ Breakfast Crepe, a mix of scrambled eggs, cheese, and bacon mixed with sweet BBQ sauce and folded into a BBQ flavored crepe.  While the crepe itself was not the delicate French kind, Brandy appreciated its texture when mixed with the filling.  The filling itself was idyllic; the eggs were cooked perfectly and the bacon's smokiness balanced the sweetness of the sauce, just as the sauce's slight vinegar bite balanced the richness of the melty cheese.  A nice side salad was also provided, which was topped with a lovely vinaigrette, which also provided contrast to the BBQ. 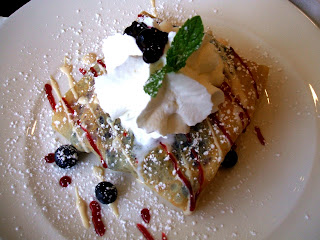 Because no brunch is complete without both a sweet and a savory option (and because she can never settle on just one course) Brandy chose the Blueberry Cheesecake Crepe for her dessert.  Once again, the crepe had more chew than a traditional French style crepe, but Brandy thought this added a much needed bit of texture to the dish.  The cheesecake interior was soft, fluffy, and rich, and Brandy relished every fork full.  Topped with not only fresh blueberries but also blueberry compote, the delightful mix of creamy, tangy, and sweet was utter perfection.

Fast, friendly service, relaxed atmosphere, and vibrant food made this stop one of Brandy's all time favorites.  She is quite excited to return and sample a plate of Tom Kah Pasta for dinner, finished with several more plates of Blueberry Cheesecake, and washed down by about 25 glasses of the Green Tea Latte.  We suspect she may be obsessed. 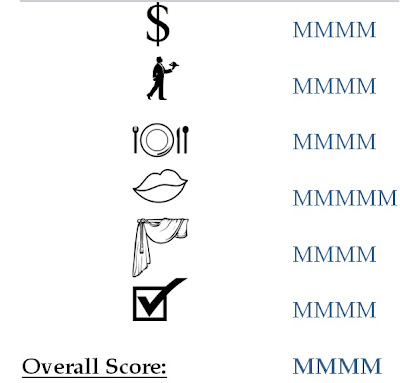 Posted by Bunny and Brandy at 9:42 AM