Cafe Con Leche or The Milk of Human Kindness 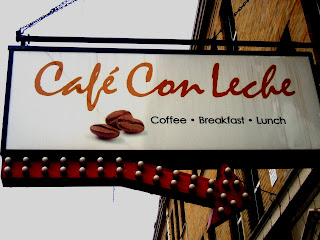 Over the course of a year, Brandy has sampled brunch delicacies from many different countries.  There has been French fair, Swedish sweets, Greek gourmet, Danish delights, English epicurean offerings, and even a journey into Japanese.  But there was something missing, some part of the world that Brandy had not quite explored properly.  Ironically, she had seen many versions of this type of cuisine popping up in almost every brunch menu out there, but never had she traveled to a restaurant that catered specifically to this kind of food.  Indeed, upon discovering this over sight, Brandy was very upset with herself, as this spectacular culture's cooking lends itself so well to all manner of things brunch, from the beverages to the entrees.  So, in order to correct this mistake, Brandy found herself one of the best Latin themed brunches in Chicago, and dragged along her pals, Biscuit and Birdie Brown for good measure. 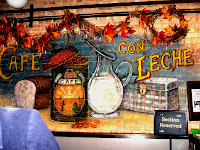 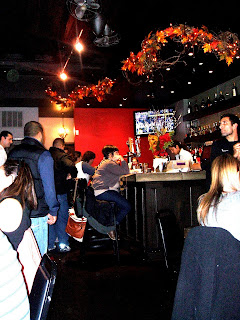 They arrived in front of an unassuming store front in Logan Square with a simple sign and arrow pointing the way to Cafe Con Leche, a small cafe attached to a larger restaurant called D'Noche.  Upon entering into the cafe, Brandy was surprised to only find a few small tables and a check-out counter.  It took a few minutes to realize that the attached restaurant lay around the corner and had more than enough room to seat the substantial amount of people waiting for tables.  After a 20 or so minute wait, Brandy and friends were taken into the room proper, which was as bright and vibrant in decor as it was in atmosphere; the walls had been painted a sophisticated shade of burgundy and lined with black, the tables were dark wood, black and white photos hung from the walls, and the enticing sound of Latin dance music filled the air. 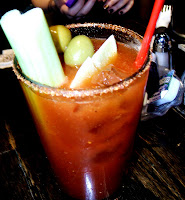 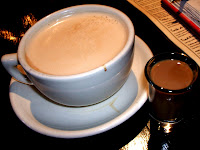 Immediately, a very attentive (and handsome, according to Brandy) server appeared to take the party's drink orders.  Biscuit chose her standard, a Bloody Mary, which came extra spicy and with a stick of celery as thick as an ear of corn.  Brandy and Birdie chose the house special Cafe Con Leche, though Brandy chose to add a shot of chocolate liquor to hers (As Brandy always says, "There's nothing like an upper and downer in one glass").  The coffee was smooth and rich and came in a very generous portion that lasted the whole meal, though Brandy considered ordering another just to watch their waiter walk it to the table. 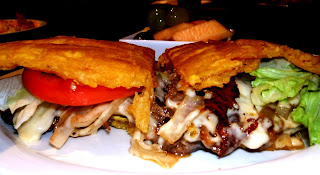 Birdie chose possibly the most adventurous entree of the day, a suedo-sandwich called a Jibartito, which consisted of steak, lettuce, tomato, and onion in between two mashed and fried plantain cakes.  The effect was rather starchy, but not nearly as greasy as one might expect.  The steak came very tender and thinly sliced, and the onions added a very nice crunch to the dish.  "I once had something similar while stationed in Cuba during the 60's," Birdie said through mouthfuls.  When asked what he was doing in Cuba in the 60's, Birdie became rather avasive and mumbled, "Nothing to do with trying to kill Castro, if that's what you're thinking." 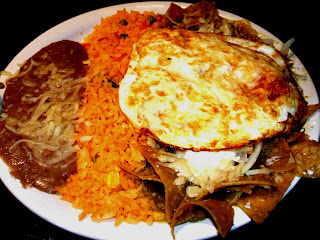 Biscuit went a bit more traditional with a dish called Chilaquiles Verdes, a mess of fried tortilla, eggs, sour cream, spiced rice, and refried beans.  Biscuit was rather surprised by the fighting power of the green chili salsa, especially when combined with the spices from the Bloody Mary ("Goodness me, my nose is running like a hound dog after a fox," she exclaimed), but the rice and beans served to cool things down a bit with good traditional Mexican flavors.  The tortilla did go a bit soggy, but there was still enough texture in the dish to keep one awake. 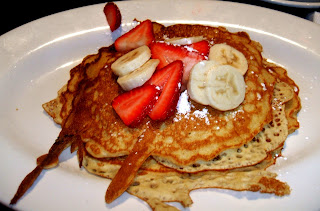 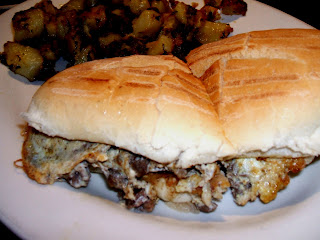 Brandy played things a bit safe with the Breakfast Torta (a steak and egg filed sandwich) and a short stack of pancakes.  The sandwich, though filed with the hearty flavors of the tender steak as well as a spread of beans and sprinkle of Chihuauaha Cheese, was in desperate need of a little burst and crunch that could have easily been provided with a little tomato or onion.  But Brandy did enjoy the softly toasted bolilo roll, and once she had added some of the house made red sauce that had been brought to the table, that burst she was looking for was found.  The sandwich also came served with some rather nicely flavored and and creamy diced potatoes, which lent a very familiar flavor that Brandy just couldn't quite put her finger on.  The pancakes, though traditional, were made well; extremely soft and fluffy and served with fresh strawberries and bananas, the two cakes seemed to make a perfect side dish to share with the table.
Brandy had definitely found a favorite in Cafe Con Leche, as the perfect service (hardly a sip of water was taken before someone was refilling their glasses), variety of exciting options, and flavorful atmosphere put this little hidden gem on par with some of the finer spots Brandy has visited.  Brandy will never be caught making the mistake of missing out on a good Latin brunch again, "Especially when it comes served by the most delicious dish in the place," as Brandy put it. 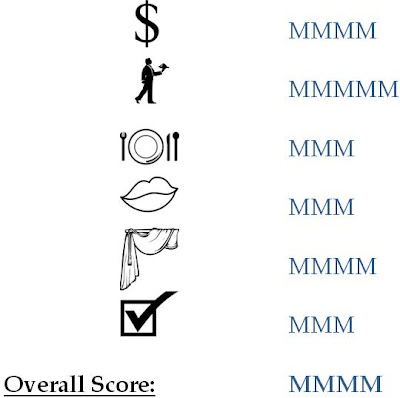 Posted by Bunny and Brandy at 9:29 AM