Over Easy or Over a Little Too Quickly?

On a deary, rainy, mostly unpleasant, yet rather English Sunday, Bunny and Brandy decided to invite a very special guest to brunch with them, that special guest being the ever insightful and most delightful Krista from Passport Delicious!  They chose Over Easy Cafe in Ravenswood as their meeting place, where the three of them hunkered under an umbrella while waiting for a table.  Over Easy being a rather small establishment with a very loyal clientele, it took nearly an hour for Our Ladies and Guest to be led inside to a table (though the wait was helped by a very handily placed coffee dispenser located just outside the door). 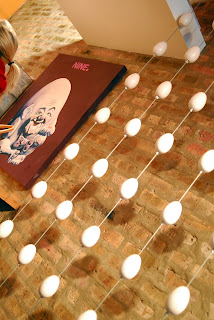 The interior of Over Easy was quite homey, yet modern, with eggs being very prominently on display (in pictures on the walls, as curtains, and even as card holders on the tables).  Once warm, seated, and acclimated to their surroundings, Bunny and Brandy ordered some coffee and tea respectively.  Brandy's tea came in its own cast iron kettle, and was of the loose leaf variety.  Our Ladies (and Krista too, as she has lived in London) are always glad to see tea served in its loose leaf form as opposed to bagged.  "There is just something about brewing one's tea without a bag," Brandy always says, "It's somewhat like being a trapeze artist with no net.  If there ever was a way to make tea dangerous, this would be it." The waitress was extremely friendly, and patient, as Brandy's failing eyesight didn't allow her to peruse the menu quite as fast as the other two.  Finally, the decisions were made: for Bunny, the Enchiladas Mextecca (a Mexican inspired breakfast plate with eggs and chorizo wrapped in tortillas and covered in green chili sauce) for Brandy Simone de Beauvoir's Favorite Breakfast Sandwich (eggs and pancetta with gruyere cheese) with a side of corn cakes, and for Krista, the ever so popular Sassy Eggs (two over easy eggs, chorizo/potato hash with a variety of peppers, guacamole, and sour cream). 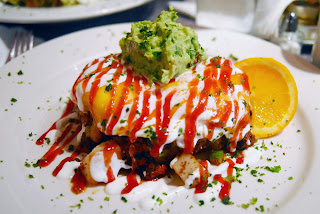 The food came out quite literally about five minutes after the order was placed, a benefit of having such a small space.  In fact, the space was so small, there was barely enough room on the table for all of their dishes.  Bunny suspected the table they had been taken to was not really meant for three people, but that they had been rushed inside to prevent them from standing in the rain any longer.  First up was Krista's Sassy Eggs.  As there was a framed picture of the dish on the wall just over Krista's shoulder, Our Party had a standard by which to compare.  As a combo of hot and cold, the dish succeeded in its balance, but the actual temperature of the food was called into question.  The "hot" was only "warm" at best.  Never the less, it was a satisfying bite of food, and probably has served more than one hung over Chicagoian a world of good. 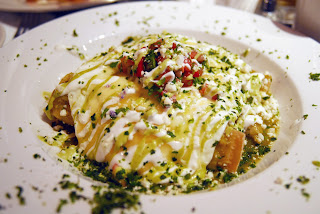 Bunny's Enchiladas were very similar, though more spicy.  The dusting of parsley on the plate counteracted with the cilantro already in the dish, making it a tad herby as well.  But over all, it was another dish where the individual elements didn't seem too impressive, but the completed bite was definitely satisfying. 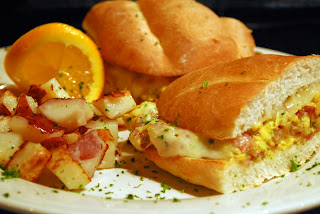 Brandy's sandwich came severed with a side of red potato hash, which was less of a "hash" and more diced potatoes, which were nicely cooked, but blandly spiced.  The sandwich itself was a little heavy on the pancetta and a little light on the cheese (for Brandy's taste anyway, but Brandy tends not to be satisfied with the amount of cheese on any given dish unless is it 100% cheese).  The bread, how ever, was unexpectedly soft and delicious.  So often, Brandy explained, breakfast sandwiches tend to be severed on bread that is either overly hard or overly toasted, and this was definitely a nice change of pace.  The Corn Cakes were the standouts, tasting like a lighter version of corn bread.  On the side was a sort of red pepper dipping sauce that allowed the corn cakes to light up with flavor. 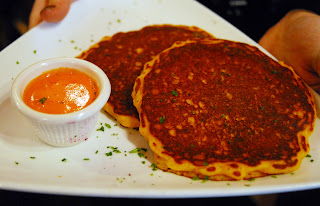 Most plates at Over Easy were priced over $10, so not the cheapest brunch that can be found, but a good value for the amount of food.  But after waiting 45+ minutes for a table, the meal felt a little rushed, having been ordered and consumed in just about the same amount of time as the wait.  A little above average, helped by a very friendly and accommodating staff, Over Easy Cafe may be great after a long night, but not so great after a long morning. 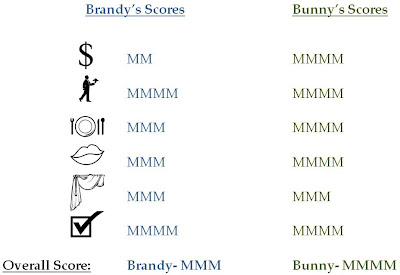 Posted by Bunny and Brandy at 8:37 AM